On April 9, "Jeopardy!" contestant James Holzhauer broke the show's record for single-day cash winnings, banking $110,914 at the end of the episode. Roger Craig previously held the record with $77,000 in single-day winnings back in September 2010.

Kaley Cuoco took to Instagram on April 8 to say that it's finally sinking in that the conclusion of "The Big Bang Theory" is fast approaching. "If it wasn't real before, it's real now 😭 @bigbangtheory_cbs #finalseason," she captioned a group photo with co-stars Kunal Nayyar, Jim Parsons, Johnny Galecki, Mayim Bialik, Melissa Rauch and Simon Helberg looking over their shoulders with their arms wrapped around each other. The image channels an early promotional photo of the cast from Season 1 of the CBS sitcom.

RELATED: Things you still might not know about the stars of "The Big Bang Theory"

On April 8, Jenna Bush Hager officially replaced Kathie Lee Gifford on the fourth hour of the "Today" show. Her parents, President George W. Bush and former first lady Laura Bush, surprised her by submitting videos congratulating her on her new gig and wishing her luck. "Hey, Jenna, your old dad here on film to tell you how much I love and how proud I am of you. I know you'll do a fabulous job," said 43. Added his missus, "We're so proud of you!" The sweet messages of support left Jenna in tears. "Is this what's gonna happen? I'm just gonna cry all the time?" she asked co-host Hoda Kotb, adding that her father also texted her to say, "You go, girl. You got 'em, girl. I'm [a] very proud dad."

Charles Van Doren — a onetime star of the NBC game show "Twenty-One" and a central player in the '50s quiz-show scandal — died at 93 on April 8 at a retirement community in Geer Village, Connecticut, his son told The New York Times. Ralph Fiennes portrayed the former Columbia University English instructor — who testified before Congress that "Twenty-One" was rigged and that he'd been given the answers in advance — in the 1994 Robert Redford-directed biopic "Quiz Show."

Sara Gilbert announced on April 9 that she's leaving "The Talk," which she co-created, at the end of the current season. After the live studio audience reacted loudly to the news, the former "Roseanne" star explained that she's been struggling to juggle her duties on the daytime talk show with her job starring on and executive producing "The Conners" and raising three young children. "Last season …. if I'm being honest about it, I think my life was slightly out of balance and I wasn't able to spend as much time with my three kids as I'd like or time for myself," she said, calling the decision "extremely difficult." She concluded by promising to occasionally return to the show as a guest host.

Whoopi Goldberg quickly shut down escalating tensions between Meghan McCain and Joy Behar — who became heated while discussing immigration policy — on the April 8 episode of "The View." The trouble started when Joy interrupted Meghan, prompting the conservative talking head to speak over the liberal writer-actress. "Hold on. I've listened to you — let me just finish," said Joy. "Yeah, part of your job is to listen to me," Meghan fired back, eliciting awkward chuckles from the live studio audience. That's when Whoopi chimed in: "So here's the deal. Here's what's not gonna happen today: We're not gonna do this," she said. "Everybody gets a conversation piece. Everybody gets to say their piece. And we don't need to comment if we don't like what we're hearing. Just let folks talk." She then prompted Joy to "finish what you're saying." Replied the stunned redhead, "I forgot what it was now."

Newcomer Emma Corrin will portray Princess Diana on the upcoming fourth season of "The Crown," multiple media outlets reported on April 9. The third season of the Netflix drama is set to debut in late 2019. The English theater actress has yet to make her Hollywood debut.

Third "The Walking Dead" series officially a go at AMC

AMC announced on April 8 that it's greenlighted a third series set within the world of "The Walking Dead," which also includes spinoff "Fear the Walking Dead." The new show will have a 10-episode first season and will begin production in Virginia this summer for a 2020 debut. According to The Hollywood Reporter, the series will center around two young female protagonists, will be set in a new corner of the world and will focus on the first generation of young people to come of age during the apocalypse. "Some will become heroes. Some will become villains. In the end, all of them will be changed forever. Grown-up and cemented in their identities, both good and bad," the network described the show. 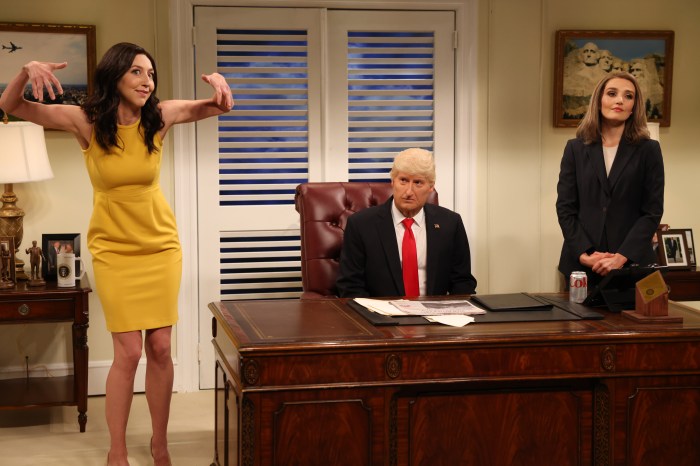