Summer is upon us and you know what that means: swimsuit season! And Hollywood has provided some of most iconic, fashionable and risque swimwear looks to inspire us. Join Wonderwall.com as we take a look back at the best swimsuit moments in TV and film, starting with Deborah Kerr's standout black halter one-piece in "From Here to Eternity." Producers of the 1953 film demanded that the swimsuit include a skirt so Deborah wouldn't appear too provocative on screen. She later said, "I don't think anyone knew I could act until I put on a bathing suit." Keep reading for more!

French-born actress Brigitte Bardot was only 17 when she donned this little white bikini in the aptly named "The Girl in the Bikini." The 1958 film was one of the first movies to feature a bikini on screen — a fashion choice that caused a storm of controversy at the time.

Elizabeth Taylor wore this now legendary chic white one-piece while starring in 1959's "Suddenly, Last Summer." In the film her character, Catherine Holly, is asked by her cousin to wear the seductive swimsuit in order to lure potential lovers.

Elvis Presley showed off his enviable physique in 1961's "Blue Hawaii," which showcased him in very fitted white swim trunks. The musical rom-com was the first of three Elvis movies to be shot in Hawaii. The King of Rock 'n' Roll was apparently so pale before filming that the movie's producer, Hal B. Wallis, personally recommended a tanning lamp for him.

Brigitte Bardot made waves once again in 1962 when she rocked a stylish white underwire top and ruffled bottom bikini in "A Very Private Affair." The French movie is a semi-biographical film about Brigitte's life and career.

Ursula Andress's white bikini is so iconic that it sold for a whooping $60,000 at a Christie's auction in 2001! The Swiss actress wore the hot swimsuit while playing Honey Ryder in the 1962 James Bond film "Dr. No."

Sally Field couldn't have looked any more adorable than she did in this high-waisted baby pink bikini on the 1960s sitcom "Gidget." The future Oscar winner starred on the show — one of the first regularly scheduled color programs on ABC — from 1965 to 1966.

Raquel Welch became one of the most popular pin-up stars of the '60s thanks to this fur-lined cavewoman bikini that she wore in "One Million Years B.C." In 2012, Raquel revealed that three form-fitting bikinis were made for her for the 1966 film. "[Costume designer] Carl [Toms] just draped me in doeskin, and I stood there while he worked on it with scissors," she told Men's Health.

Pam Grier became one of the major sex symbols of the 1970s when she donned this little white bikini in 1973's "Coffy." In the movie, she stars as a nurse-turned-vigilante who seeks revenge on a drug dealer responsible for her sister's addiction. It was Pam's first leading role in a film.

Jaclyn Smith caused quite a stir when she appeared in a white bikini with her fully clothed co-stars in this 1976 promotional photo for "Charlie's Angels." Farrah Fawcett made even bigger headlines when she was photographed in a red one-piece for a poster to promote the show — an image that would go to become one of the best selling posters of all time.

No one can forget Bo Derek's legendary swimsuit in 1979's "10." The Long Beach, California, native rocked a nude one-piece and beaded cornrows as she jogged along the beach — a look that has since been replicated several times over in pop culture.

Brooke Shields' topless bikini look from 1980's "Blue Lagoon" was incredibly controversial. The former model was only 14 when she accepted the role of Emmeline, a shipwrecked teen who comes into her sexual maturity while stranded on a tropical island with her cousin.

Teenage boys across the nation went wild when Phoebe Cates emerged from a pool in a teeny red bikini in 1982's "Fast Times at Ridgemont High." Judge Reinhold's character, Brad, daydreams the iconic scene before he's caught pleasuring himself by Phoebe's character, Linda.

Princess Leia's 1983 copper and red silk bikini is one of the most memorable looks in film history. Carrie Fisher became an overnight sex symbol when she donned the iconic costume in "Stars Wars: Return of the Jedi," an experience that she didn't always enjoy. "It was like, 'Where am I in all of this?' … I have to stay with the slug with the big tongue! Nearly naked, which is not a style choice for me," she told NPR in 2016. "It wasn't my choice. When [director George Lucas] showed me the outfit, I thought he was kidding and it made me very nervous. I had to sit very straight because I couldn't have lines on my sides, like little creases. No creases were allowed, so I had to sit very, very rigid straight.

Pamela Anderson was one of It girls of the '90s thanks to her unforgettable red high-cut "Baywatch" bathing suit. The former Playboy model wore the sexy swimwear for nearly every episode of her five-season run on the show as lifeguard CJ Parker.

Salma Hayek became an overnight sensation when she appeared in this burgundy bikini and headdress in 1996's "From Dusk till Dawn." The movie was only Salma's second Hollywood film but definitely not her last. She went on to appear in several acclaimed movies including "Frida," for which she earned an Academy Award nomination.

Angela Bassett was 40 going on 20 when she donned this hot pink bikini in 1998's "How Stella Got Her Groove Back." In the film, Angela stars as a successful stockbroker who finds love with a much younger man while vacationing in Jamaica.

Denise Richards showed off her perfect summer body in 1998's "Wild Things." The sexually charged film, which was Denise's second movie ever, gained notoriety for its risqué scenes that included a steamy kiss between Denise and co-star Neve Campbell.

Who says women can't kick butt in a bikini? Angelina Jolie was taking down the bad guys and looking hot while doing it in this black two-piece swimsuit in 2003's "Tomb Raider: The Cradle Of Life."

Demi Moore was the talk of the town when rocked this tiny black bikini at age 41 in 2003's "Charlie's Angels: Full Throttle." The iconic scene famously revived Demi's career and showed that the mother of three was just as hot — if not hotter — than she was when her career kicked off in the '80s.

"Blue Crush" showed just how athletic beach bodies can be. Mika Boorem, Michelle Rodriguez, Kate Bosworth and Sanoe Lake all sported stand-out bikini looks in the film, which follows a group of female surfers. "I was weight training and learning to surf seven hours a day, seven days a week for four months," Kate told Cosmopolitan of her "Blue Crush" preparations. "I gained 15 pounds of muscle."

Christina Ricci made a statement in this high-waisted black bikini in 1998's "The Opposite of Sex." In the movie, she plays a 16-year-old runaway who seduces her brother's lover.

Halle Berry's tangerine bikini has become one of the most legendary on-screen swimsuit looks since she wore it in 2002's "Die Another Day." Halle's admitted that she tries it on every once in a while to make sure she's still in shape. "If I can't get into it, I eat less junk food for a bit. It's really useful," she once told Teen Hollywood of the James Bond-kini.

Rachel McAdams looked classically beautiful in this 1940s high-waisted burgundy checkered two-piece swimsuit in 2004's "The Notebook." She shared the beach scene with future ex-boyfriend Ryan Gosling, who famously told her character, Allie, "If you're a bird, I'm a bird." Awww!

Jessica Alba was the picture-perfect vision of a Bahamas beach girl in 2005's "Into The Blue." She donned a sexy turquoise bikini top and striped bikini bottoms in a promotional poster for the film, which was soon posted in college dorms across the country.

Daniel Craig showed off his perfectly chiseled muscles in these fitted blue swim trunks in 2006's "Casino Royale." The James Bond movie was Daniel's first in the iconic series.

Talk about eye-catching! Sacha Baron Cohen bared it all in this neon green sling swimsuit in 2006's "Borat: Cultural Learnings of America for Make Benefit Glorious Nation of Kazakhstan."

Only Blake Lively could look this flawless while fighting sharks. The then-mother-of-two donned a yellow bikini top and blue tribal-print bikini bottoms in 2016's "The Shallows."

"Baywatch" swimsuits aren't only for the ladies. Dwayne Johnson and Zac Efron looked smokin' hot in their red swim trunks in 2017's "Baywatch." Sadly, their amazing physiques couldn't stop the movie reboot from becoming a total flop at the box office. 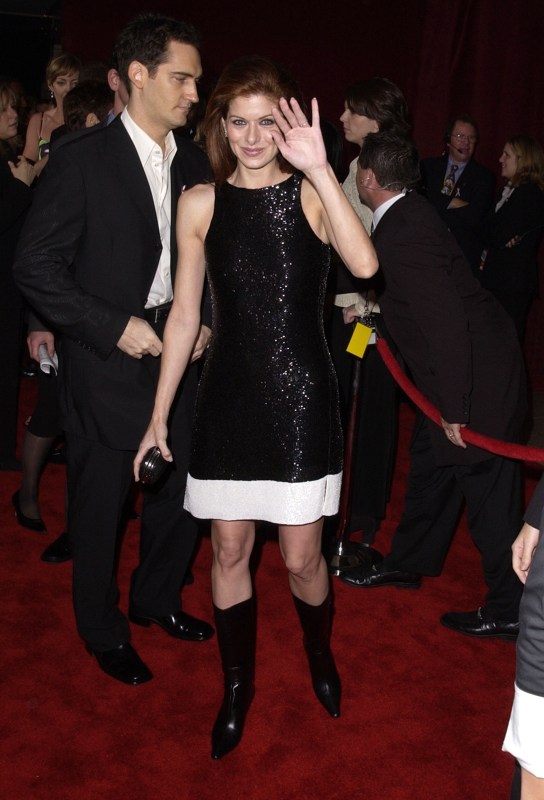