"Pose" star Billy Porter didn't expect to face so much backlash over his recent comments about Vogue putting Harry Styles in a dress on its cover. "Apparently I'm famous now, and it was a slow news day, so the first thing I want to say is, 'Harry Styles, I apologize to you for having your name in my mouth,'" Billy told Stephen Colbert on the Nov. 4 episode of "The Late Show" (via Billboard). He was referring to an interview published last month by the Sunday Times in which Billy said, among other critiques, "I created the conversation [about non-binary fashion] and yet Vogue still put Harry Styles, a straight white man, in a dress on their cover for the first time." Speaking to Harry via "The Late Show," Billy clarified, "It's not about you … the conversation is actually deeper than that. It is about the oppression and the erasure of people of color who contribute to the culture. That's a lot to unpack. I'm willing to unpack it sans the dragging and culture of the Internet because I do not now, nor will I ever, adjudicate my life or humanity in sound bites on social media. So when you're ready to have the real conversation, call a b****!" He added that he likes Harry.

RELATED: Celebs who came out

Harry Styles helps fan come out to her mom

In other Harry Styles news… Once again, the One Direction alum pressed pause on a concert this week to respond to a fan in need. During his Love on Tour show in Milwaukee, Wisconsin, on Nov. 5, the singer spotted a sign in the crowd. It read, "My mom is in section 201. Help me come out," and was held up by a fan named McKinley McConnell, according to Yahoo. Between songs, Harry walked over to McKinley. "What would you like to tell your mother?" he asked, holding the mic in her direction. "Oh, that's a microphone!" McKinley replied. Harry then offered to make the announcement himself. "Shall I tell her?" he asked. "I can do it if you like, if you prefer I do it." When McKinley, sounding nervous, agreed, saying, "OK, there's a lot of people," Harry sweetly teased her. "There is a lot of people," he said of the sold-out stadium crowd. "Did you not know? Did you think this through?" he joked. With McKinley's OK, the singer then hustled over towards section 201 and hollered, "Lisa, she's gay!" as the crowd cheered. On Twitter later, McKinley posted. "A moment that will actually be with me forever. thank you for creating a safe place for me. Thank you for letting me grow along side you as a fan. thank you for helping me know who I am. thank you." In an interview with NBC News, she said that after the whole thing went down, her mom told her she "always had a flair for dramatics," adding, "I'm really beyond blessed that both my parents are so supportive. And I think they probably always suspected, even though you try to act like they don't. She just kept saying she loves me and is proud of me." Back in September, Harry stopped a show in Detroit to give a fan dating advice.

Shailene Woodley appears to be riding out the "storm" as her fiance, Aaron Rodgers, faces controversy over his COVID-19 diagnosis and vaccination status. "Calm Seas May Bring You Peace," the "Big Little Lies" star shared on her Instagram Story this week (per Page Six), "… But Storms Are Where You'll Find Your Power." Shailene's beau tested positive for COVID-19 on Nov. 3, sparking questions from those who recalled he said in August he'd been "immunized" against the disease. It turns out he was not vaccinated but instead took a homeopathic approach to what he considers to be immunization against the highly contagious illness. The Green Bay Packers quarterback appeared remotely on the Nov. 5 edition of "The Pat McAfee Show," where he blamed "the media" for failing to ask follow-up questions in August about his immunization, according to NBC News. He also said he'd also been following recommendations from podcaster Joe Rogan, including the use of an animal dewormer, ivermectin. (Joe tested positive for COVID-19 two months ago; the FDA has said that while ivermectin can cause severe hepatitis in humans, it shows no proof of efficacy against COVID-19.) "I realize I'm in the crosshairs of the woke mob right now," Aaron said. "So before my final nail gets put in my cancel culture casket, I think I would like to set the record straight on so many of the blatant lies that are out there about myself."

George Clooney has joined a growing list of celebs who've asked — or in some cases, urged — the press not to publish photos of their children. The Oscar winner shares 4-year-old twins Ella and Alexander with his wife, Amal Clooney. And as he explained in an open letter published this week, Amal's work as an international human rights attorney raises the stakes in terms of the family's safety. In a note addressed to "the Daily Mail and other publications," George writes: "Having just seen photos of Billie Lourd's 1 year-old baby in your publication, and the fact that you subsequently took those pictures down, we would request that you refrain from putting our children's faces in your publication," according to Deadline. "As a public figure, I accept the oftentimes intrusive photos as part of the price to pay for doing my job. Our children have made no such commitment. The nature of my wife's work has her confronting and putting on trial terrorist groups and we take as much precaution as we can to keep our family safe. We cannot protect our children if any publication puts their faces on their cover," George continues. "We have never sold a picture of our kids, we are not on social media and never post pictures because to do so would put their lives in jeopardy. Not paranoid jeopardy but real-world issues, with real-world consequences," the actor adds. "We hope that you would agree that the need to sell advertisement isn't greater than the need to keep innocent children from being targeted." Blake Lively and Ryan Reynolds and Gigi Hadid and her now ex-partner, Zayn Malik, have made similar requests regarding photos of their kids this past year.

As Kim Kardashian West enjoys multiple evenings out (and some public hand-holding) with Pete Davidson, Kim's ex, Kanye West has made it clear he wants her back. Or at least, he did when he was interviewed for Revolt TV's "Drink Champs" podcast, which appears to have been taped in October. On Nov. 5, Page Six reported the rapper had unfollowed Kim on Instagram again, though it's unclear if that was a reaction to the Pete rumors, to headlines about his recent Kim comments or to something else entirely. Among the eye-popping statements 'Ye made on "Drink Champs" was an assertion that Kim was forced by "Saturday Night Live" to talk about her divorce from Kanye when she hosted the show. "'SNL' making my wife say 'I divorced him' on TV because they just wanted to get that bar off. I never even seen the papers. We're not even divorced," he says in the podcast. "They ain't no joke to me. My kids want their parents to stay together. I want us to be together." This week marks the second time Kanye's unfollowed Kim in two months, according to Page Six. She filed for divorce from the rapper in February.

Jessica Simpson was overwhelmed by support for sobriety post

Jessica Simpson kicked off her week by sharing an "unrecognizable," unflattering photo of herself from four years ago, right before she got sober. According to a friend of the singer-turned businesswoman, her raw and candid post was met with a huge wave of support. "It was very real for her," the insider tells People. "She spent half the day crying. It meant so much to her to hear from people, hear their stories and know that she helped even one person." Near the end of the lengthy caption that accompanied the pic, Jess recalled, "The drinking wasn't the issue. I was. I didn't love myself. I didn't respect my own power. Today I do. … I am free." Her friend tells People it's important to Jessica to "share the truth," both good and bad. "She was reflecting. Jessica does not want to hide anything anymore," the pal explains. "She's doing really well. She's very present and she's clear and clear-minded and her family is doing great," the pal says. "It's not that she doesn't face challenges but she's learning how to be better equipped to deal with challenges and more accepting of things that have happened in her past."

Following the success of Kelly Clarkson's daytime talk show, Jennifer Hudson is in talks for a show of her own, Variety reported on Nov. 4. The "Respect" star, 40, is working with the team behind "The Ellen DeGeneres Show," namely Ellen's executive producers, Andy Lassner and Mary Connelly, on the talk show, which Warner Bros. TV has reportedly been testing. If it gets a green light, the new show would be out next fall after Ellen goes off the air. Kelly's show, meanwhile, is slated to take over Ellen's coveted daytime schedule slot.

When Gwen Stefani walked down the aisle to marry Blake Shelton over Fourth of July weekend, she expected to hear the vows they'd written read aloud. But as Blake revealed on Instagram on Nov. 4, he "decided to surprise her by writing a song instead." That song, "We Can Reach the Stars," dropped as a single on Nov. 5 ahead of the Dec. 3 release of Blake's new album, "Body Language Deluxe." And Carson Daly, who officiated Blake and Gwen's wedding, already wants some of the credit. "You didn't decide to [write a song instead], I forced you to," Carson joked in the comments. "Thank Jesus too, yielded the best wedding moment & a hit song! You should buy me a tracker w the royalties cowboy," he added. 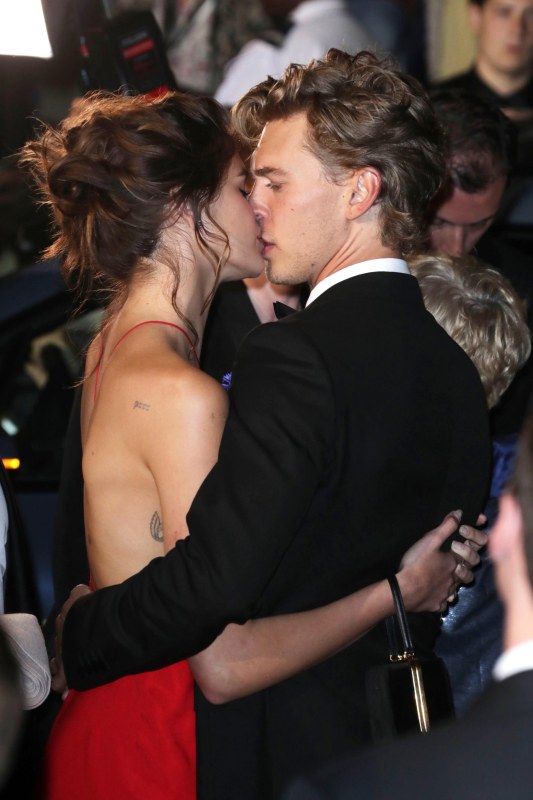