At least one person from Jennifer Aniston's past suspects the actress is taking her split from Justin Theroux in stride. "I haven't spoken to Jennifer about it but I'm sure she's doing OK right now," Matt LeBlanc told The Sun this week. "She's a big girl." Jennifer and Justin announced last week that they'd called time on their relationship after three years of marriage and seven years together, saying in a joint statement that they remained "best friends" when they broke up at the end of 2017. Even among Jen's "Friends" pals, it seems folks aren't taking sides, either. Courteney Cox was spotted having drinks with a group that included Justin last month. Courteney helped her longtime BFF Jen celebrate her birthday shortly after that in early February. (Justin skipped the birthday celebration.) The logistics of the pair's split appears to be relatively uncomplicated, too. A new report from the Daily Mail indicates Jen will likely be legally able to keep the eight-carat, emerald-cut diamond engagement ring Justin gave her. They also reportedly kept their real estate properties separate after they wed.

After Shaun White scored a gold medal for his halfpipe run at the PyeongChang 2018 Olympics, he thanked Korea "for the amazing experience" and wrote on Instagram that he couldn't wait to "see everyone at home" in Los Angeles. Looks like the celebration got underway, pronto, with a visit from Miley Cyrus. Miley– along with Shaun's pooch (who by the way has a pretty darn stylish Instagram account of his own) — posed for a photo with Shaun and his shiny new accolade on Tuesday, Feb. 20. "Chillin w an American legend …. & I mean @leroythegoodboy ….. ," Miley joked, adding, "kidding @shaunwhite you are the s—! So bad a–! Proud of you!" The Olympic gold was Shaun's third.

Jeez, mom. It sounds like that well-known phrase was likely running through the head of Sally Field's son, Sam Greisman, this week, after she very publicly tried to set him up with Olympic bronze medal-winning figure skater Adam Rippon. According to the New York Post, Sam, 30, was so embarrassed that his mom tweeted out a text thread showing her trying to get Sam to "find a way" to ask Adam out, telling him, "Sam … he's insanely pretty." A snitch tells the Post the 28-year-old skater was later overheard telling someone that Sam had private messaged him with an apology for the attempted setup. Not that it sounds like an apology was necessary: Adam reportedly told his friend or colleague he dug Sally's "bold" stab at matchmaking. "I'm sure one day we're going to meet," Adam reportedly said of Sam.

For the record, Arya Stark — aka Maisie Williams — knows how "Game of Thrones" ends — and she says it's "surreal." Alas, that's pretty much the extent of the spoilers. Maisie stopped by to chat with Jimmy Kimmel on "The Tonight Show" this week, where she was promoting the new animated comedy, "Early Man." Understandably, however, Jimmy spent a good deal of time grilling his guest on the show that made her a star, which will reportedly head into its final season beginning in 2019. "I do, I know the end of 'Game of Thrones,'" the 20-year-old declared (via E! News). The actress, who remains BFFs with her engaged costar Sophie Turner, said she read the script for the ending in bed. And while she wouldn't share much in the way of plot details, she did chime in on rumors the cast would shoot different endings so that nobody would know what actually happened until the finale aired. "Well, I heard this and I immediately thought, 'I don't think we've got the budget to shoot lots of different endings,'" she said. As for the ending Maisie read? "[It's] just surreal, to be honest," she said. "Being with this show for so long and then it also having the following that it does, everyone is just waiting for this moment and you read it … and it's incredible." The only person Maisie let see the script, she added, was her mom. Asked if that was OK with the producers, the actress smiled and admitted, "Probably not, actually."

"Brb. Paradise." That's how "Game of Thrones" star Sophie Turner captioned this perfectly glam beach shot earlier this week. Turns out paradise — at least, the version of paradise Sophie and her fiance Joe recently enjoyed — costs $45,000 a night. The pair stole some time away together in the Maldives just ahead of Sophie's 22nd birthday on Wednesday, Feb. 21. According to the New York Post, Sophie and Joe stayed at Coco Prive, a resort on an "ultra exclusive" private island in the South Asian locale, where amenities include a private chef, access to a luxury yacht and plenty of diving options. The trip is reportedly the first vacation the two have taken together since they got engaged.

It's turning out to be quite the year for celebrity motorist rescues. Just one week after Luke Wilson pulled a woman who'd been trapped in her car after a crash to safety, Snoop Dogg reportedly helped Katrina Graham when her car broke down on the freeway in Riverside, California, on Sunday, Feb. 18. She was sitting in her car waiting for her brother to arrive when, according to the story she told TMZ (via XXL), Snoop knocked on her window and offered to help. She was reportedly sitting in traffic, so the rapper suggested giving her a push to get her out of harm's way. He had apparently parked his own car near an exit and run over to the stranded woman.

Onward and upward. Although Georgina Chapman ditched plans to show off her latest Marchesa collection with a runway show New York Fashion Week, the designer — who left husband Harvey Weinstein just days after two reports exposed years of his alleged sexual misconduct, assault and rape — is working and moving forward. Georgina's close friend and business partner, Keren Craig, recently spoke to Grazia for an interview pegged to Marchesa's Fall/Winter 2018 pieces and opened up about how Georgina is handling life after her ex's scandal. "Everything you see here today Georgina sketched while she was out of the office and going through a very, very tough time. George was just sending sketches through. It was unbelievable. This collection is the result of that time. I feel emotional about it because I actually couldn't believe how incredibly strong she was. She threw herself into her work. She threw herself into protecting her kids. Marchesa is her life. It is her passion. You see it here: even though she was going through all that, these beautiful things have somehow come out of such a hard time," Keren said. As for Harvey, Keren expressed concern for his accusers. "I just feel immense sadness for the victims, for the women who have spoken out so brave. I'm very glad he's getting some help," she said. Finally, she pointed out that Georgina's strength is getting her through the situation. "She doesn't see herself as a victim," Keren explained. "That's very important. She's just trying to get on with her life. You've got to realize George is such a strong woman. Don't get me wrong — it's a very hard time. But she's quite inspirational." Looking ahead, she added that Marchesa plans to "make a gesture" to support those affected by the #MeToo and Time's Up movements Harvey's scandal helped inspire, saying, "We need to properly process how it can be the most beneficial."

Nearly a decade after she signed a petition to get Roman Polanski released from custody in Switzerland, where he was being held on a warrant tied to the rape of a 13-year-old girl, Natalie Portman is rethinking her choice. She's also hoping she can help change the conversation around sexual assault and other forms of misconduct in Hollywood so that the focus shifts from the wrongdoing of once powerful men to the missed opportunities of women and other marginalized members of the film community. "I very much regret it. I take responsibility for not thinking about it enough," she told Buzzfeed this week when asked about the 2009 petition (via Us Weekly). "Someone I respected gave it to me, and said, 'I signed this. Will you, too?' And I was like, 'Sure.' It was a mistake. The thing I feel like I gained from it is empathy towards people who have made mistakes. We lived in a different world, and that doesn't excuse anything. But you can have your eyes opened and completely change the way you want to live. My eyes were not open." Natalie wasn't the only A-lister whose eyes weren't open when it came to Roman Polanski. Martin Scorsese, David Lynch and Darren Aronofsky also signed the petition, even though Roman pleaded guilty in 1977 to having had sex with a minor then ran off to Europe prior to his sentencing. "I don't think that's what the conversation should be about," Natalie continued. "I think it should be about: Why didn't Elaine May make a movie every year? Why didn't Nora Ephron make a movie every year? Where's the female version of Bill Cosby? Why don't we see any Asian women in films? There's so much art that's being lost by not giving opportunities to women and people of color. Let's not talk about what man's career is over. Let's talk about the vast art trove we've lost by not giving women, people of color, people with disabilities, and the LGBTQ+ community opportunities — let's talk about that loss for all of us in art," she continued. "Let's talk about that huge hole in our culture. I don't want talk about 'Isn't it sad that this person who's made 500 movies can't make movies anymore?' That's not for me to decide. And it's also not what I'm upset about." In October, another woman came forward to accuse Roman of molesting her at a photoshoot when she was 10.

Are "The Real Housewives of New York City" gearing up to sue the hand that feeds them? Insiders tell the New York Post that after a nightmare boat trip near Cartagena, Colombia, cast members including Tinsley Mortimer, Carole Radziwill, Bethenny Frankel, Ramona Singer and Dorinda Medley are considering legal action against the network. According to a previous report, the ladies were filming the cruise — which took place on what the Post's source said was an old, cramped and "decrepit" ship — when the anchor fell out prematurely, the engine caught fire and the boat started taking water with only "two or three lifejackets" aboard. A passing boat reportedly saved the cast, who were by the point "hysterical," according to the source. A Bravo spokesperson downplayed the scenario, telling the Post: "On the return trip to the mainland, the boat encountered turbulent water, which caused the anchor to deploy unexpectedly. At no time . . . was the vessel in danger of sinking, nor was a rescue required. Thankfully, everyone is fine. The safety of our cast and crew is paramount and, to that end, we are still reviewing the situation." The "RHONY" contracts reportedly contain stipulations that would make a lawsuit difficult. 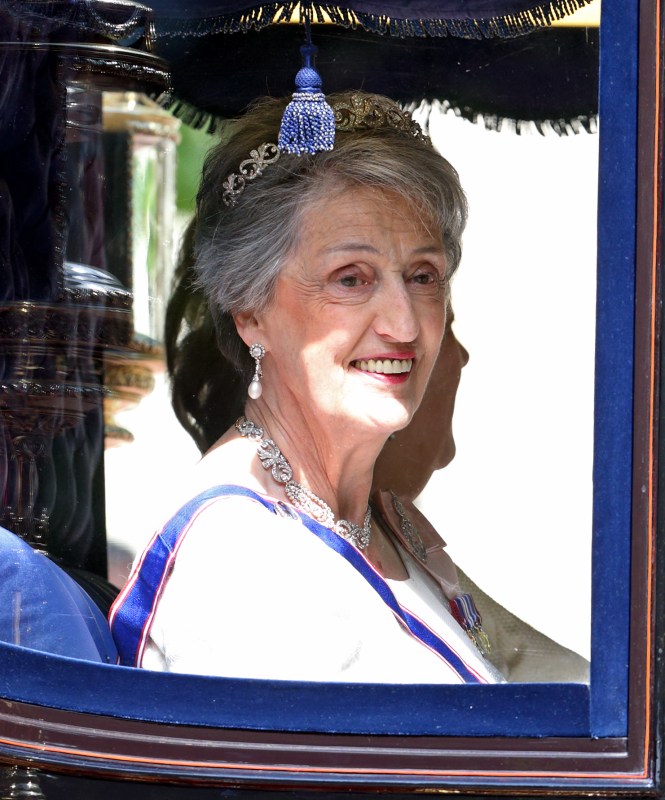