It's time to round up the best (and cutest!) celebrity PDA moments of 2018! Let's start with these lovebirds! Young couple Lily-Rose Depp and Timothee Chalamet shared a dramatic kiss in the rain during a night out in New York City on Oct. 11. Keep reading for more stars showing some PDA…

RELATED: Celebs who got married in 2018

Prince Harry and Meghan Markle shared a kiss after their wedding ceremony at St. George's Chapel at Windsor Castle on May 19.

Chris Hemsworth proved you are never too old to show your mother some love as he planted a kiss on Leonie Hemsworth at the premiere of his movie "Bad Times at the El Royale" in San Sebastian, Spain, on Sept. 29.

Cardi B was consoled by husband Offset after turning herself in to New York City police in an assault case on Oct. 1.

Alex Rodriguez and Jennifer Lopez shared a kiss while participating in a panel discussion at Project Destined Bronx Bootcamp at Yankee Stadium in New York City on March 4.

Rose McGowan got a kiss from partner Rain Dove while attending the LOVE Magazine 10th Birthday Party at Loulou's in London on Sept. 17.

Diane Kruger and Norman Reedus took their love affair to the Critics' Choice Awards in Santa Monica, California — and sealed it with a kiss! — on Jan. 11.

Ben Kingsley got a peck on the cheek from wife Daniela Lavender at the premiere of "Operation Finale" during the 44th Deauville American Film Festival in Deauville, France, on Sept. 8.

Kelly Ripa and Mark Consuelos shared a smooch on the red carpet at the 90th Annual Academy Awards in Hollywood on March 4.

Lady Gaga gave co-star Bradley Cooper a kiss on the cheek at the premiere of "A Star is Born" in London on Sept. 27.

John Legend and Chrissy Teigen kissed in the press room at the Creative Arts Emmys in Los Angeles on Sept. 9 moments after he became an EGOT winner.

Matt Pokora and Christina Milian kept it sizzling while lounging on a yacht in Saint-Tropez, France, on Aug. 30.

Joe LoCicero gave then-girlfriend (now-fiancée) Gina Rodriguez a cute kiss for the cameras on the red carpet at the 90th Annual Academy Awards in Hollywood on March 4.

Lauren Silverman and boyfriend Simon Cowell shared a smooch as they arrived at a private party in Los Angeles on Sept. 1.

Stella Maxwell and girlfriend Kristen Stewart shared a very cute PDA moment while out and about in Los Angeles on Aug. 25.

Leslie Bibb and longtime boyfriend Sam Rockwell were a picture of love at the 75th Annual Golden Globe Awards in Beverly Hills on Jan. 7.

Joe Jonas and fiancée Sophie Turner packed on the PDA while attending the U.S. Open Tennis Championships in Flushing, New York, on Aug. 31.

Wells Adams and Sarah Hyland shared a loving embrace on Aug. 4 after he arrived at her home in Los Angeles after driving cross-country from Nashville to move in with her.

Gerard Butler planted a kiss on longtime love Morgan Brown at the premiere of "Hunter Killer" in New York City on Oct. 22.

Kevin Bacon and his wife, Kyra Sedgwick, shared a smooch at the 75th Annual Golden Globe Awards in Beverly Hills on Jan. 7.

Peter Facinelli and girlfriend Lily Anne Harrison were snapped kissing while grabbing a coffee in Los Angeles on Aug. 8.

Dove Cameron and boyfriend Thomas Doherty kissed passionately on the set of their latest TV movie, "Two Wolves," in Toronto on Sept. 4.

Mel B and BFF Gary Madatyan were seen sharing a quick smooch as they left Simon Cowell's Hollywood Walk of Fame star party in Los Angeles on Aug. 22.

The Chainsmokers' Alex Pall and girlfriend Katelyn Byrd showed some PDA as they left Craig's restaurant in West Hollywood on Aug. 4.

Oil heiress Nats Getty and fiancée Gigi Gorgeous got cutesy while attending an event in New York City on July 24.

Curtis Conway planted a kiss on Laila Ali as they attended the 2018 ESPY Awards in Los Angeles on July 18.

Malin Akerman and fiance Jack Donnelly shared a kiss at the world premiere of "Rampage" at the Microsoft Theater in Los Angeles on April 4.

Cara Delevingne cuddled up to Ashley Benson as she fed the meter in Los Angeles on May 27.

Amy Adams planted a big kiss on her husband, Darren Le Gallo, while attending the premiere of her HBO miniseries, "Sharp Objects," in Los Angeles on July 3.

John Cena and then-fiancée Nikki Bella locked lips at the WrestleMania 35 press conference in New York City on March 16 a month before their breakup.

Gerard Butler couldn't keep his hands off girlfriend Morgan Brown at the Malibu Chili Cook Off carnival on Sept. 1.

Ellen Page and wife Emma Portner shared a kiss after arriving at a screening of "The Cured" in West Hollywood on Feb. 20.

Tracy Morgan planted a big kiss on wife Megan Wollover at the Turner Networks 2018 Upfront in New York City on May 16.

Golfer Dustin Johnson got a kiss from fiancée Paulina Gretzky on the 16th hole during the Ryder Cup in Paris on Sept. 20.

Dwyane Wade and Gabrielle Union couldn't keep their hands off each other while on vacation in Saint-Jean-Cap-Ferrat, France, on May 25.

Eva Longoria got a sweet kiss from husband Jose Baston while receiving her star on the Hollywood Walk of Fame in Los Angeles on April 28.

Evan Ross and Ashlee Simpson shared a sweet kiss as they arrived at the Billboard Music Awards at the MGM Grand Garden Arena in Las Vegas on May 20.

Dua Lipa and boyfriend Isaac Carew smooched on the streets of New York City on June 28.

Morgan Evans and Kelsea Ballerini kissed on the red carpet at the 2018 CMT Music Awards at the Bridgestone Arena in Nashville on June 6.

Daryl Sabara and fiancée Meghan Trainor kissed at the season finale viewing party for "The Four: Battle for Stardom" in Los Angeles on Feb. 8.

Luis Fonsi and Agueda Lopez shared a tender kiss as they arrived at the Billboard Music Awards at the MGM Grand Garden Arena in Las Vegas on May 20.

Lily Aldridge gave Gigi Hadid a kiss on the cheek at the premiere of "Oceans 8" in New York City on June 5.

James Franco and girlfriend Isabel Pakzad looked loved up while out shopping in New York City on Aug. 24.

Kaya Scodelario and husband Benjamin Walker shared a kiss at the "Maze Runner: The Death Cure" film premiere in London on Jan. 22.

Sasha Farber and Emma Slater kissed while golfing at the Cabo Del Sol Golf Course during their honeymoon at the Grand Fiesta Americana Los Cabos resort in Mexico on April 8.

Walton Goggins and wife Nadia Conners were all loved up at the "Tomb Raider" premiere in Los Angeles on March 15.

Soccer star Neymar kissed girlfriend Bruna Marquezine while they were out in Rio de Janeiro on April 5.

Travis Mills planted a kiss on girlfriend Madelaine Petsch at the Art of Elysium Gala in Los Angeles on Jan. 6.

Matt Damon couldn't keep his hands off his wife Luciana while watching a UFC fight in Las Vegas on Oct. 7.

Morgan Evans and wife Kelsea Ballerini shared an affectionate moment on the red carpet at the 53rd Annual Academy of Country Music Awards in Las Vegas on April 15.

Alec Baldwin and pregnant wife Hilaria were snapped getting cute while out and about in Los Angeles on Jan. 30.

Lionel Richie and girlfriend Lisa Parigi shared a sweet moment at his hand and footprint ceremony at the TCL Chinese Theatre in Hollywood on March 7.

Michael Bolton showed some love for girlfriend Helene Fischer while out to dinner in Los Angeles on Feb. 27.

Kristen Anderson-Lopez and husband Robert Lopez shared a celebratory kiss after winning best original song for "Remember Me" from the movie "Coco" at the 90th Annual Academy Awards in Hollywood on March 4.

Gabrielle Union pecked husband Dwyane Wade on the cheek during a night out at Leynia restaurant at the Delano hotel in Miami on Feb. 9.

Donnie Wahlberg and Jenny McCarthy showed how they keep their passion alive while at the 60th Annual Grammy Awards in New York City on Jan. 28.

Emily Ratajkowski cozied up to husband Sebastian Bear-McClard while out and about in New York City on Oct. 25.

Gary Busey and wife Steffanie Sampson packed on the PDA as they made a trip to the ATM in Malibu on Jan. 30.

Meryl Streep gave a sweet peck on the cheek to activist Ai-jen Poo as they attended the 75th Annual Golden Globe Awards in Beverly Hills on Jan. 7.

Ariel Winter and boyfriend Levi Meaden were snapped sharing a kiss while out in Los Angeles on Feb. 1.

"Master of None" star (and history-making Emmy winner) Lena Waithe smooched longtime girlfriend Alana Mayo at the premiere of "The Chi" in Los Angeles on Jan. 3.

Ne-Yo and wife Crystal Renay kissed on the lips at the InStyle and Warner Bros. Golden Globes afterparty in Beverly Hills on Jan. 7.

Then-newlyweds Chris Hardwick and Lydia Hearst showed that they are still in their honeymoon phase while attending the Elton John AIDS Foundation Academy Awards Viewing Party in West Hollywood on March 4.

Prince Christian of Hanover enjoyed a sweet moment with his new wife, Alessandra de Osma, during their wedding in Lima, Peru, on March 17.

Judi Dench got a kiss on the cheek from Geoffrey Palmer at the Oldie of the Year Awards in London on Jan. 30.

"One Tree Hill" alum Bethany Joy Lenz spent a lazy Sunday with her boyfriend at a farmers market in Studio City, California, on July 1.

Model Alexis Ren and her boyfriend shared a kiss as she got ready for "Dancing With the Stars" practice in Los Angeles on Sept. 20.

Bailee Madison shared a cute moment with boyfriend Alex Lange while in Toronto on Sept. 4.

Megyn Kelly and her husband Douglas Brunt shared a kiss while heading home from dinner in New York City on Nov. 18. 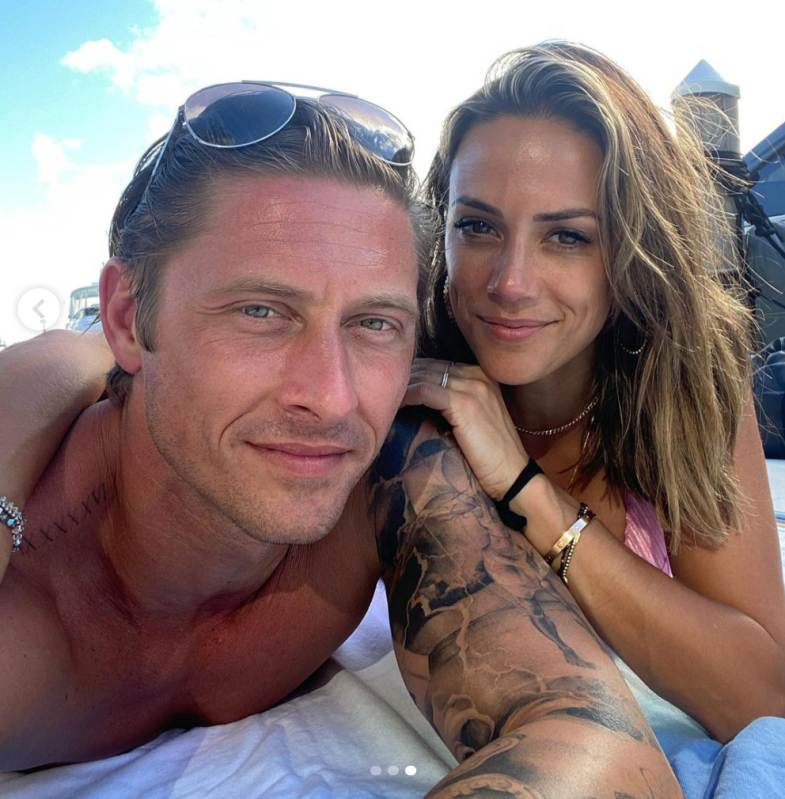