Kim Kardashian West left ring finger was bare once more in Instagram photos she shared on Monday, Jan. 11, to promote her SKIMS line's hosiery collection. The post comes amid reports her marriage to Kanye West is at a breaking point and the two are headed for divorce. Kim, who's stayed quiet on social media for much of the past week, can be seen reclining on a closet floor in lingerie without her wedding band or engagement ring on in the new pics, one of which clearly shows her bare left hand by her face. The reality star also shared new information about the line on her Instagram Story in a Monday post first picked up on by People. There, she wears a diamond band on one hand, but it's too hard to see whether the band is the one Kanye slipped on her finger. (It's also hard to know whether Kim, a seasoned marketing pro, is simply taking advantage of the split buzz to generate more attention for her new line.)

Over the weekend, Sarah Jessica Parker, Cynthia Nixon and Kristin Davis confirmed they've signed on for a "Sex and the City" reboot. HBO Max's 10-episode series, "And Just Like That…," will not include Kim Cattrall, who's long made it known she's no fan of SJP and will never revisit any version of her Samantha Jones character. That didn't stop fans from sharing their disappointment about a Samantha-less "SATC" on social media, though, and even SJP said she, she, too, is bummed about the change. "Happy to see you back but will miss Kim/Samantha," wrote on Instagram user in the comments on Sarah Jessica's reboot announcement post. "We will too," the actress replied. "We loved her so. X." Kim may not miss playing Samantha, but she might have one or two qualms about missing out on the reported payday former castmates will reportedly enjoy for the reboot. According to Variety, the main characters are set to make more than $1 million per episode.

RELATED: Famous hot men you forgot were on 'Sex and the City'

More than two decades into his battle with addiction — and one year since his last relapse — AJ McLean says he "finally feels comfortable in" his own skin. The 43-year-old Backstreet Boy opened up about his ongoing sobriety mission on the Monday, Jan. 11, edition of the "Recovering from Reality" podcast, where he reflected on his past drinking patterns ("I am a chronic relapser, but I've never gone for like a month straight of just drinking and partying," he explained) as well as the changes he's seen in himself since he began an Alcoholics Anonymous 12-step program. "I am at a place now where I don't give a s— what you think about me. I am the person I am for all the reasons and all the life lessons that I've learned and will continue to learn," the singer said (via People). "I can look at myself in the mirror and be more confident before I leave the house. And I can tell myself in the morning how grateful I am for this, this, and this," he continued, praising his wife, Rochelle, and their kids as his "lifeline." AJ also admitted how he's changed his approach to touring so he can't fall into old habits like planning where to have a drink and which dealer he'd call before arriving in a given city. Today, AJ said he has systems to ensure a plane or tour bus, "has been wiped of any kind of alcohol or any drugs" before he gets on. "I need to make the same environment that I have at home when I'm not at home," he added.

This past weekend marked two important dates for Iman. The supermodel's late husband, David Bowie, would have turned 74 on Friday, Jan. 8, had he not lost his battle with liver cancer on Jan. 10, 2016. On Saturday, Iman, 65, shared a sweet photo of the rock icon gently kissing her forehead on Instagram. "Forehead kisses are kisses meant for the soul. #EternalLove #BowieForever," she wrote on the post. The next day, she posted a drawing of two ethereal figures wrapped around one another. "January 10th #IMANart #EternalEmbrace #EternalLove #BowieForever," she captioned the post. Iman and David tied the knot in 1992. They welcomed their daughter, Lexie Jones, in 2000.

The riot at the U.S. Capitol building last week sparked discussions about what consequences Donald Trump should face for his role in encouraging the insurrection. Most of that talk has centered around removing the president from office. But for one group of pop culture fans, nixing the president from Pennsylvania Avenue and social media isn't enough. As one Twitter user posted over the weekend, Trump, "should be tried, imprisoned and digitally removed from Home Alone 2," in light of his role in the attack. The president's cameo in the 1992 "Lost in New York" flick involves Trump telling Macaulay Culkin's Kevin where to find a hotel lobby. "I won't rest until he is removed from that scene in Home Alone 2," another fan posted on Twitter. If he is eventually edited out before the movie airs again on TV, NME reminds us it wouldn't be the first time. Canada's CBC chopped out Trump's scene, along with some more footage, for time/space/ad reasons in 2019. At the time, Trump used the edit as an opportunity to dis Canada's prime minister, Justin Trudeau, tweeting, "I guess Justin T doesn't much like my making him pay up on NATO or Trade!" Last week, Twitter permanently suspended Trump from the platform, citing tweets the company deemed, "likely to inspire others to replicate the violent acts that took place" at the Capitol.

Kate Mara reveals why 'A Teacher' won't get a second season

Fans hoping for a second season of Kate Mara's controversial show, "A Teacher," will have to make due with what's already been released. Because "there was never really any discussion about more seasons," Kate recently told The Wrap. The series features Kate, 37, as a married high school English teacher who establishes a predatory relationship with one of her students, played by Nick Robinson, 25. "I wish we were doing three more seasons of it," Kate admitted. "But I don't know how we would continue unless there was no time passing at all, because we're both playing sort of older than we are [at the end]." While there won't be more seasons, Kate said she hopes the show, which turns on the perspective of Nick's character, can help it become, "less taboo for men who have had experiences where they are the so-called 'survivor victim," to talk about what they've been through.

After dodging romance rumors for months, Michael B. Jordan and Lori Harvey went Instagram official with their relationship over the weekend, sharing separate posts that confirmed they are, in fact, an item. Michael, 33, shared a pair of shadowy photos of the two hugging close to one another near the lights of what looks like a Christmas tree, while Lori, 23, shared pics of Michael kissing her on the cheek as she tilts her head back, smiling, and the couple standing by a tree. Lori, whose dad is Steve Harvey, has been romantically linked to Diddy and Future in the past, while Michael seemed to be single as recently as last fall, when he opened up about what he's looking for in a woman as part of a People feature pegged to his Sexiest Man Alive honor.

Kate Hudson wants to reconnect with her estranged half-siblings

As the new year gets underway, Kate Hudson is mulling over some family relationships that have fallen by the wayside. The actress, 41, and her brother Oliver, 44, share four half-siblings via their estranged father, Bill Hudson. And as Kate told Oliver on the pair's "Sibling Revelry" podcast last week, she'd like to get back in touch with them. "I've been thinking a lot about Dad," Kate explained (via USAToday). "I've been thinking about our sisters, that we don't spend any time with, and our brother. Brothers. We've got four siblings we don't spend any time with," she continued. "Everybody's getting older … I just had this moment of like, it would be nice to connect a little bit, especially with my sisters." She added: "We've been talking so much about sibling relationships, and distraught relationships. And we're sitting here like, we've got the best family, we're so great. And yet, we don't ever acknowledge the fact that we have four other siblings — four. So I've been thinking a lot about the Hudsons. Thinking that it's important that we reach out with all of our siblings and maybe connect with them a little bit." Kate and Oliver were the product of their mom, Goldie's Hawn's six-year marriage to Bill, but the two were raised by Goldie's longtime partner, Kurt Russell. Back in 2015, Oliver effectively ended his relationship with his biological dad when he posted, "Happy abandonment day… @KateHudson," on Instagram on Father's Day. He's since said he and Bill have reconnected a bit. Kate, meanwhile, has said she forgave Bill for being MIA after her parents split.

Cynthia Bailey defends having her wedding during the pandemic

Shortly before "Real Housewives of Atlanta" star Cynthia Bailey walked down the aisle to marry Mike Hill in October, Bravo decided not to film the wedding, as it seemed unsafe to send a production crew to an indoor event during the coronavirus pandemic. Later, Cynthia was criticized online when social media photos from the ceremony surfaced, some showed guests close together, without masks. Speaking to Andy Cohen on the Sunday, Jan. 10 edition of "Watch What Happens Live," Cynthia defended the couple's decision to go ahead with the wedding, which was initially to be held outdoors but was moved inside because of an impending hurricane. "We did everything on our end to ensure everyone's safety, from masks, shields, temperature checks," Cynthia told Andy (via ET). "I had a COVID-19 specialist come and spray the place. With that said, what happened was the only time people were allowed to take their masks off was to eat or drink at the wedding, so that happened. Then a lot of people wanted to take pictures with their masks off. So I wasn't even thinking, 'Of course, now all the pictures are gonna have the masks off.'" Luckily, the pre-planning seemed to have worked in everyone's favor. Asked if anyone at the wedding contracted the virus, Cynthia said, "No, thank you Jesus. No one tested positive as a result of being at our wedding."

Diddy's house in the Toluca Lake section of Los Angeles — the one where his late love Kim Porter lived until her death in 2018 — was recently broken into, according to a new TMZ report. The outlet's law enforcement sources reportedly confirmed the home's security alarm went off after someone apparently "pried open a side door and entered" the residence, which a caretaker later noticed they'd "rummaged through." As of Monday, Jan. 11, it was unclear whether anything had gone missing. The Bad Boy Records mogul reportedly spends little time at the house. The break-in news comes just one week after an attempted burglary at Dr. Dre's house, also in Los Angeles. 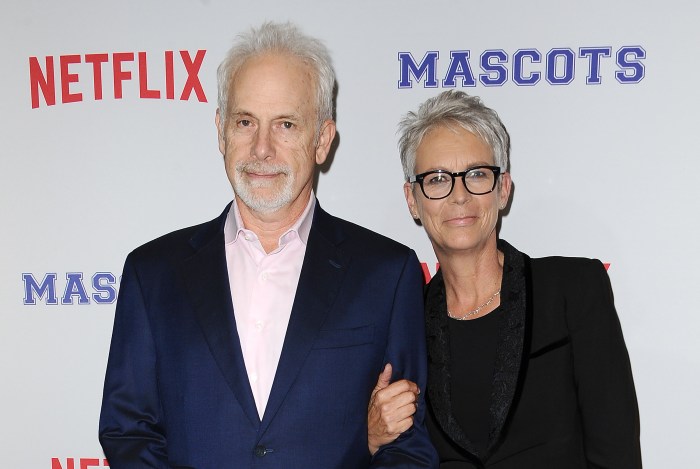 Up Next LGBTQ kids