This might come as a surprise, but not every Hollywood couple gets hitched and then splits in record-breaking time. Some duos — get this! — actually stay together long enough to, you know, learn each other's middle names. Let's take a look at some of the celebrity couples who've bucked the stereotype, starting with Sarah Michelle Gellar and Freddie Prinze Jr! Talk about a real fairy tale love story! Freddie Prinze Jr. and Sarah Michelle Gellar met on the set of "I Know What You Did Last Summer" in 1997 though didn't start dating until three years later. They got married in 2002 and have since become parents to a daughter, Charlotte, and a son, Rocco. Keep reading to see more famous couples who've beat the odds in Tinseltown…

Tom Hanks and Rita Wilson met in the early '80s when she guest-starred on his sitcom, "Bosom Buddies," teamed up for the 1985 movie "Volunteers" and married in 1988. A likable, genuine couple with a flair for comedy, Tom and Rita have been a mainstay couple in Hollywood for three decades now!

Stereotypically, country music is all about losing your lover and suffering all manner of bad luck. But these two seem to have found good luck in their marriage. Tim McGraw and Faith Hill met back in the mid-'90s at the Country Radio Seminar's New Faces show, where both were on the bill. Faith soon joined Tim on tour as his opening act and they fell in love and married in 1996. The couple have three children together — daughters Gracie, Maggie and Audrey.

RELATED: Celebrity hookups and first dates: How you favorite stars got together

These two stylish Brits clearly go together well! Who would have guessed that a Spice Girl would have made such good wife material — or that a soccer player would be such a devoted husband? David Beckham and Victoria Beckham started dating in 1997, married in 1999 and now have four beautiful children together.

Kurt Russell and Goldie Hawn both suffered failed relationships before finding each other. Now they're one of Hollywood's oldest couples, together since 1983. Perhaps the key to their success is the fact that they have never actually walked down the aisle.

The love between Harrison Ford and Calista Flockhart is kind of a big deal. That's because Harrison and Calista have been an item for more than 15 years. After meeting at the 2002 Golden Globes, the two clicked despite their 22-year age difference. They married eight years later in June 2010.

Want to know why sculptor Don Gummer is more clever than most of the people we write about on Wonderwall.com? Because despite being married to one of the most famous actresses alive today, he's managed to keep himself out of the spotlight and retain a private life. Well done, Mr. Gummer. Married since 1978, Meryl Streep and Don have four children together — Henry, Mamie, Grace and Louisa.

They'd be a fun Hollywood couple if they weren't exclusively a Manhattan couple. Sarah Jessica Parker wore a black dress on her wedding day in May 1997. She and Matthew Broderick now share three children — son James and twin daughters Loretta and Tabitha.

This relationship has survived plenty, including the death of a child and even a sex scandal. It shouldn't come as a surprise that John Travolta and Kelly Preston are willing to stick by each other's sides considering how long they've been together. After meeting in 1987, the couple tied the knot in 1991.

This couple has long faced rumors of discord in their marriage, but they're still going strong. Married since 1997, Will Smith and Jada Pinkett Smith have two children together, Jaden Smith and Willow Smith. If they play their cards right, they'll continue to be the power couple to beat years from now.

Elton John has said he has his hubby to thank for staying sober and happy. Elton met David Furnish at a dinner party in 1993 and the two fell in love quickly, though laws stood in the way of their marriage for years. Now, they're dads to two sons and have been legally married since December 2014.

Throughout his entire career as a leading man, Denzel Washington has been married to the same woman. And that's notable given the stereotype that holds that most leading men dump their first wives for younger models. Denzel married Paula Pearson in 1983, and the two have weathered cheating rumors and persevered despite tabloid gossip. Denzel and Paula have four children together — John David, Katia, Olivia and Malcolm.

Since 2000, when he scored the role of Wolverine in "X-Men," Hugh Jackman has become one of the biggest names in Hollywood. But long before he was a major star in the States, the Oscar nominee was the husband of Australian actress Deborra-lee Furness, whom he married in 1996. The couple are parents to two adopted children, Oscar and Ava.

Usually one member of a celebrity duo shines brighter than the other, but that's certainly not the case with this Hollywood power couple. Kyra Sedgwick and Kevin Bacon married in 1988 and have two children together, son Travis and daughter Sosie.

You know what keeps a couple going strong? Communication. And you'll have plenty of that if your significant other is Kelly Ripa. Even if Mark Consuelos were mute, there'd still be enough communication to keep this marriage going strong. The adorable duo met on the set of "All My Children" in 1995 and eloped in Las Vegas the next year. They welcome their first son, Michael, in 1997 and then went on to have daughter Lola in 2001 and son Joaquin in 2003.

LL Cool J has accomplished plenty in the music, TV and business worlds. He can also add marriage to the long list of things he's good at. After LL and wife Simone Johnson married in 1995, they went on to have four children, Samaria, Nina, Najee and Italia.

Sting and his producer wife, Trudie Styler, have four children together and once loved to boast that their successful marriage was due to an active sex life and plenty of tantric yoga! They've been together forever, so we'll let them enjoy some bragging rights. A couple since 1982, the two didn't tie the knot until 10 years later.

Sharon Osbourne met Ozzy Osbourne when she was just 18 (her father managed his band, Black Sabbath). They married in 1982 and have made it through more than their fair share of trials and tribulations over the decades. Despite all the drama, drug use and cheating, they've won the fight for their marriage and are still going strong today.

Duran Duran frontman Simon Le Bon might be "Hungry Like the Wolf," but his model wife knows how to appease his appetite. Simon and Yasmin Le Bon have been together since his New Wave band got huge in the early '80s and married in 1985. The couple have three daughters together — Amber Rose, Saffron Sahara and Tallulah Pine.

Michael J. Fox and Tracy Pollan have weathered some major storms during their long marriage — like Michael's Parkinson's disease diagnosis. But for better or worse, this Hollywood family has stuck together. They married in 1988 and have four children together — Sam, Aquinnah, Schuyler and Esme.

Rob Lowe and wife Sheryl Berkoff married in 1991 — and Rob once claimed their relationship was the first time he had ever tried out monogamy. More than 25 years and two children later, it seems like it's working out well for the happy couple!

Even though they both call comedy their career, Steve Carell and Nancy Carell take their marriage and family very, very seriously. Married since 1995, the couple have two children together, Elisabeth and John.

Though they've never married, Oprah Winfrey has been with businessman Stedman Graham since 1986!

She's best known for her acting achievements, but Annette Bening also gets to boast that she's the one who finally reeled in legendary ladies man Warren Beatty. Who would've thought he'd be the type to get married in 1992 — and stay married?!

Jeff Bridges met wife Susan Geston while he was filming at the North Dakota ranch where she worked. Through sickness, health and three daughters — Isabelle, Jessica and Hayley — the couple has persevered since marrying in 1977.

Jon Bon Jovi might have achieved mega-success as a musician, but that doesn't mean he's a rock-star stereotype. Case in point? No sordid romantic past! In fact, he's known his wife for a really long time, especially by Hollywood standards. Jon met Dorothea Hurley in high school and the two eloped in Las Vegas back in 1989. Four children and nearly three decades of marriage later, this rock 'n' roll couple is still going strong!

Ricky Gervais and partner Jane Fallon met in college. If we had to venture a guess, we'd say Jane must have a pretty liberal sense of humor — and a whole lot of patience. How else could the novelist stand Ricky's particularly offensive breed of humor for this long? The two, who've opted not to tie the knot, have been together since 1982.

Australian actress Cate Blanchett met playwright and screenwriter Andrew Upton in 1996 and married him in 1997. They have three biological sons together, Dashiell, Roman and Ignatius, and one adopted daughter, Edith.

When we say that these two get to "lord" their marriage over short-lived Hollywood couples, we mean it: British comedy star Christopher Guest is actually a titled lord (he's the 5th Baron Haden-Guest!) which makes Jamie Lee Curtis, who married him in 1984, a lady. The pair share two adopted children, Anne and Thomas.

Anyone with even a minor knowledge of film knows Dustin Hoffman's name. But his wife, Lisa, is a commercial force outside of Hollywood: She's the founder of her own cosmetics line specializing in perfumes. Married since 1980, the two have four children together, Jacob, Rebecca, Maxwell and Alexandra.

When they wed in 1989, it seemed like Cars frontman Ric Ocasek and his knockout model wife, Paulina Porizkova, were the least likely couple ever. All these years later, however, they're still going strong. They have two sons together, Jonathan and Oliver.

Regis Philbin has been in the business almost as long as anyone can remember, and his second wife, Joy, has been by his side since nearly the beginning. In fact, they're one of the longest lasting couples around: They married in 1970!

Steven Spielberg and Kate Capshaw — who met when he directed her in "Indiana Jones and the Temple of Doom" — have been married since 1991. Counting their kids from previous marriages and their biological and adopted children together, they're parents of seven!

Chris O'Donnell and wife Caroline Fentress, a former teacher, give most Hollywood parents a run for their money: The couple, who've been married since 1997, have five kids! 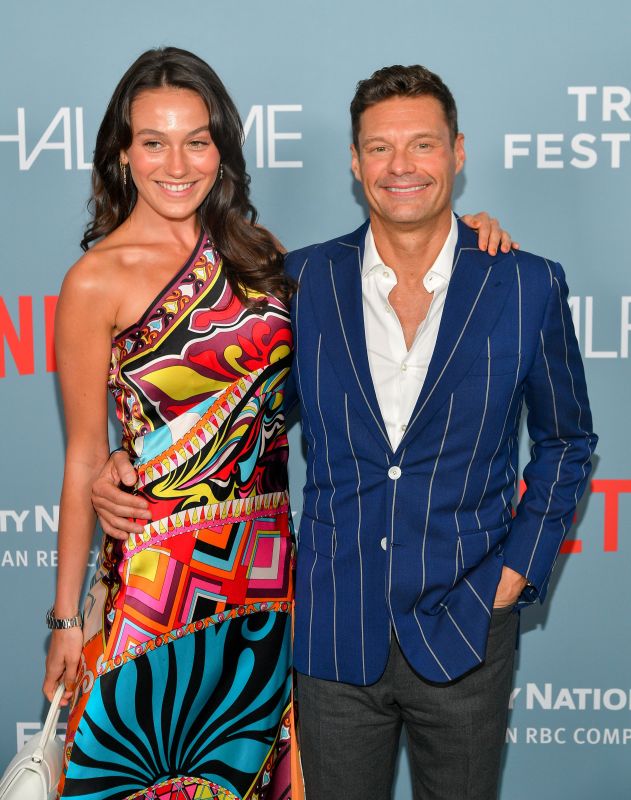