Back in 1999, the Backstreet Boys were international pop stars enjoying the single life. Now, 20 years later, the boybanders are proud husbands and fathers. In celebration of the 20th anniversary of their hit album "Millennium" on May 18, 2019, we're taking a look at the lovely ladies who married Brian Littrell, Kevin Richardson, A.J. McLean, Nick Carter and Howie Dorough, as well as their adorable children. Keep reading for a guide to the Backstreet Boys' wives and kids…

A.J. McLean is happily married to hair stylist and makeup artist Rochelle DeAnna Karidis. The duo began dating in 2009 and A.J. popped the question one year later on his 32nd birthday during a live concert performance in Las Vegas. The pair are pictured here in 2010 during their early days as a couple.

A.J. McLean and Rochelle Karidis tied the knot in December 2011 at the Beverly Hills Hotel with BSB members Kevin Richardson, Howie Dorough, Brian Littrell and Nick Carter in attendance. A.J. credits Rochelle for helping him overcome his drug and alcohol addictions, which he's battled since the early 2000s. The couple reenacted their wedding for A.J.'s "Boy and a Man" music video in March 2019. "She's not thrilled about being on film, but she's a trooper and she's doing it for me," he told "Entertainment Tonight."

A.J. McLean and wife Rochelle welcomed their first child together, daughter Ava Jaymes, in November 2012. Their second daughter, Lyric Dean, was born five years later in March 2017. Rochelle and their kiddos are pictured here in an adorable 2018 Instagram selfie. Fun fact: A.J. is the only BSB member with daughters!

Happily ever after — Disney style. Kevin Richardson and his wife, dancer-actress Kristin Willits Richardson, met while the pair were working together at Florida's Walt Disney World in 1993. Kristin was playing Belle from "Beauty and the Beast" while Kevin was performing as Aladdin. Sparks flew and after seven years of dating, the couple announced their engagement on MTV in February 2000. They're seen here at an Oscars party the same year.

Kevin Richardson and Kristin Richardson married in Kentucky four months after getting engaged and welcomed their first child, son Mason Frey, in July 2007. Their journey to becoming parents, however, was a difficult one…

Kevin Richardson and wife Kristin struggled with fertility issues before welcoming their second son, Maxwell Haze, in July 2013. The couple credit acupuncture with helping them conceive little Maxwell. "It was amazing," Kevin told "Entertainment Tonight." "We were jumping for joy. Kristin and I come from big families. She's the youngest of three, I'm the youngest of three, and we had always envisioned ourselves with more than one child." How cute does the family look in this 2018 Instagram selfie?!

"As Long As You Love Me" is not only a great Backstreet Boys song — it was also the catalyst for one of the longest BSB marriages. Brian Littrell met his future wife, Leighanne Wallace, on the video shoot for the 1997 single (she was an actress hired to be in the video). The duo hit it off and began dating shortly afterward.

Brian Littrell and Leighanne Wallace wed the following year in September 2000 in Atlanta. The couple, who are committed evangelical Christians, renewed their vows 10 years later. So what's the secret to their long-lasting marriage? "Communication, trust and keeping the passion alive," Brian told the Daily Mail.

Brian Littrell and Leighanne Wallace Littrell's only child, son Baylee Littrell, was born in November 2002. Leighanne currently works as Baylee's manager (the teen– a budding singer — will be opening up for his dad on tour in the summer of 2019). The family of three is pictured here at a 2019 Academy of Country Music Awards radio event.

Nick Carter dated a slew of famous ladies — including Paris Hilton and Willa Ford — before finding true love with fitness trainer Lauren Kitt, who's now the owner and co-founder of Pro Derm Aesthetics, a cosmetic and regenerative dermatology center. The couple met through Nick's brother and sister in the Florida Keys in 2008. "At the time — and they say this happens all the time — I didn't want a relationship," Nick told Rolling Stone in 2014. "I didn't want to be in a relationship at all, and then all of a sudden… smack, right in my face." The couple are seen here in 2012, early on in their romance.

Nick Carter and Lauren Kitt dated for five years before Nick proposed with a 7-carat pear-shaped diamond ring in 2013. The cute couple married in Santa Barbara, California, one year later in April 2014.

In 2016, Nick Carter became the final BSB member to join the dad club. He and Lauren Kitt welcomed their first child together, son Odin Reign, in April that year. Nick posted this super-sweet selfie with his tot on Instagram in 2018, writing "…My body hurts from dancing and I was feeling low from being away for so long, but when he woke me up at 5:00 am saying DADDY a 100 times, my heart filled up and my energy returned. I missed him so much. I live for him and his mommy." In May 2019, the couple revealed new joy: They're expecting again following a devastating 2018 miscarriage.

Back in 2000, Leigh Boniello was hired as the Backstreet Boys' webmaster. The future film exec-turned-real estate broker soon met Howie Dorough and the rest, as they say, is history. "It was like, 'Here we are in Mexico, let's get a private tour of the pyramids and go on crazy adventures together!'" she told "Entertainment Tonight." "It just lent itself to a romantic situation." The couple are seen here in 2002 not long after they got together romantically.

Howie Dorough and Leigh Boniello soon began dating and Howie proposed to Leigh on New Year's Eve 2006 in front of 40 friends and family members. "She wasn't expecting it, and I was quite nervous," he told People magazine at the time. They married in December 2007.

Howie Dorough and Leigh Boniello soon welcomed their first child, son James Hoke, in May 2009. Four years later, their second son, Holden John, was born. The cuties are pictured here in a snapshot Leigh posted on Instagram in 2018. 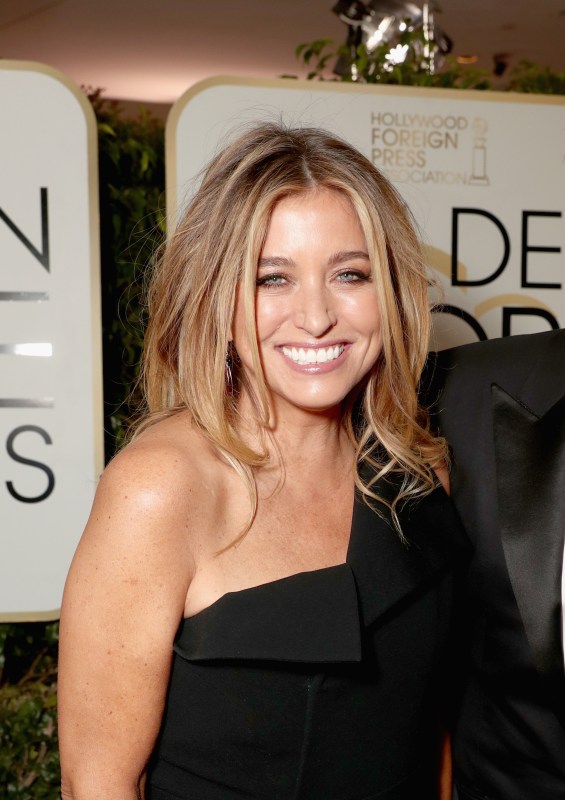