Paris Hilton's engagement ring has its own security

Kim Kardashian West isn't the only celebrity taking extra steps to protect her multi-million dollar jewelry in 2018. According to TMZ, Kim's former pal Paris Hilton, who got engaged to Chris Zylka in Aspen, Colorado, over New Year's, has enlisted 24-hour security to watch over her and the $2 million ring recently Chris slipped on her finger. Sources tell TMZ members of the undercover sparkler guard — they reportedly wear street clothes so as to go unnoticed — stay with Kim and the ring at all times. She also reportedly keeps security on alert all day and all night at her home. The extra measures appear to have been set up due to the slew of celebrity home burglaries in 2017 as well as Kim's scary Paris robbery. Kim reportedly now stores all her jewelry in an undisclosed location away from her house.

From the Women's March to the #MeToo Movement, women, famous and otherwise, spent much of 2017 adhering to the old adage about strength in numbers when it came to fighting for equality. When awards season kicks off with the Golden Globes this weekend, viewers are likely to see a similar mentality on display on the red carpet. According to The Blast, Reese Witherspoon, Jessica Chastain and Eva Longoria, along with other high-profile spokeswomen for the Time's Up legal defense fund, plan to make their entrances not with their dates and not solo but together in solidarity with other women. Insiders tell the website Reese and Eva plan to hit the red carpet together as do Jessica Chastain and an actress pal. Time's Up, which launched this week as a resource for victims of sexual harassment in all industries, is also encouraging celebs to wear black to the Globes this year. "This is a moment of solidarity, not a fashion moment," Eva recently told the New York Times. "For years, we've sold these awards shows as women, with our gowns and colors and our beautiful faces and our glamour. This time the industry can't expect us to go up and twirl around. That's not what this moment is about."

Did Scott Disick get jealous of Sofia Richie's ex over NYE?

Sofia Richie's pre-Scott Disick romance with Formula One star Lewis Hamilton may have Scott on edge. At least that's how it looked to one partygoer who spotted Sofia and Scott watching Lewis shooting a $100,000 pool game with Brandon Davis in Aspen, Colorado, at one of the New Year's bashes they attended over the weekend. "Sofia started talking to Lewis during the [pool] game. When Scott saw them talking, he went ballistic, crazy," the insider told the New York Post. "He was very jealous. He insisted they leave the party immediately." A rep for Lewis later denied there had been any discomfort between the three, telling the tab, "… there was no jealousy, no fight, and no issue; rather, as Ms. Richie has herself confirmed, there was a perfectly friendly, polite exchange and any claim to the contrary is simply false."

Ansel Elgort did doughnuts during the bomb cyclone because of course

Fun fact: It's not method acting if you do it a year after the movie has come and gone. Not that "Baby Driver" star Ansel Elgort seems to mind. As the East Coast hunkered down and suffered through a "bomb cyclone" on Thursday, Jan. 4, Ansel took advantage of the dangerously slippery and snow-laden conditions to hop in a red Suburu resembling the one he drove in the aforementioned movie and whip, skid out sideways and do doughnuts in what appears to be an empty lot or yard. A friend filmed the moment, which Ansel captioned on Twitter, "Nyc snowstorm no worries baby will give u a ride." At one point in the clip, the friend can be heard deadpanning, "alright, baby," in what we imagine was accompanied by an eye roll. Our sentiments, exactly, dude.

Martha Stewart gets trapped in Florida during bomb cyclone

Meanwhile, in multi-millionaire "bomb cyclone" news … As the bombogenesis storm pummeled half the country on Wednesday, Jan. 4, Martha Stewart found herself with neither a way to get home nor a way to enjoy the uncharacteristically freezing Florida weather. "I am stranded in Florida like many other holiday travelers and I am looking for great things to do here in semi frigid temperatures-?" she wrote on Instagram, sharing a video of a boat cruising along the water under sunny, but apparently cold, skies. "It is really inclement here," she added, "And I am worried about the farm crops [and] citrus crops! But I know it is even worse up north where people cannot even get to work and pipes are freezing and trees breaking!!!" Among our favorite suggestions for Martha in the comments on the post? The user who invited Martha to come to Miami for good company, "fine wine and semi-luxurious cheese" and the Palm Beach resident who encouraged the lifestyle guru to come by his or her tattoo shop for some ink and a BBQ.

Justin Bieber is getting his own museum exhibit

The good folks of Justin Bieber's native Stratford, Ontario, have decided the world needs a museum exhibit devoted to their hometown hero. According to the Stratford Beach Herald, the exhibit, "Steps to Stardom," will focus on the 23-year-old star's childhood busking days on the steps of a local theater. Curators from the museum reportedly worked with Justin's grandparents and Justin himself to procure items including the singer's Grammy Award, a hockey bag, personal letters, backstage credentials and some of his microphones, among other things. Speaking to the Herald, the museum's general manager John Kastner said Justin "was very appreciative" and "couldn't have been nicer" when he learned of the museum's interest in staging the exhibit. "Steps to Stardom" opens Feb. 18.

Need proof Miley Cyrus really does believe in the folks she backs on "The Voice?" Here's some, courtesy of Janice Freeman, who competed on Miley's team during Season 13: When Janice needed a place to live recently, Miley jumped in to help. On Twitter this week, Janice announced: "Thank you ALL but she found us placement until we found permanent housing, gave me the deposit, covered me for 6 months so I can get on my feet! @MileyCyrus you are one of my closest friends and what you did for me and my family Im praying GOD gives you the desire of your heart!" Janice also got candid about how much Miley's assistance and support meant to her, telling followers in an Instagram live video, "Miley, you are my dawg, like my best friend, and I will defend you to the bitter end. You got somebody that got your back." She continued: "I'm so overwhelmed and I need ya'll to understand that it is time to go into 2018 believing God for real. Ya'll don't understand that you see these people on TV …but you don't understand that these people are real. Her heart is so huge and she allows God to use her to bless my life." As a "Voice" insider told Us Weekly in 2016, Miley helps her team figure out their hair, makeup and wardrobe and is "the only" coach who attends all the dress rehearsals, despite not being paid to do so. Said the source: "She's the show's most devoted coach ever."

On Wednesday, Jan. 3, Alyssa Milano joined pro-DACA protesters for a press conference and rally to protect the Dream Act outside California Sen. Dianne Feinstein's Los Angeles office. The actress later called a meeting with the senator "productive" and retweeted one of her posts. "Funding for the federal government expires on Jan. 19," the senator wrote in the tweet. "We must pair the Dream Act with a bill to fund the government. Every day we fail to act 122 #Dreamers lose their protection from deportation. Let's get it done! #DreamActNow Senator Feinstein recommitted her support for the Dreamers and promised to use her leverage to get a resolution before the deadline." America Ferrara was also among the celebs involved with the protest, according to TheBlast.

Margot Robbie opens up about 'I, Tonya' and her post-'Suicide Squad' security budget

Margot Robbie's first break came when she played the wife of Jordan Belfort in "The Wolf of Wall Street." In the script, her character was described rather dismissively as "the hottest blonde ever." Though Margot nailed her performance by all accounts, she recently revealed to THR that the result was a slew of offers to play other versions of "the hottest blonde ever." "You could read a script and almost pull them out and nothing else would be affected," Margot explained. "Like if you pulled out that card, the card castle wouldn't come tumbling down, and that's not that exciting to me." Rather than get stuck with such roles, she formed her own production company so she could go after scripts that interested her. That's how she ended up playing controversial figure skater Tonya Harding in the Oscar buzz-worthy film, "I, Tonya." She admits she "found it emotionally traumatic to put [herself] in the mind-set of someone who's in an abusive relationship," but also relished the challenge of understanding Tonya's mindset. She also implies in the interview that the film contributed to her three-part career goal of achieving "quality, versatility and longevity." A Another recent career move, however, threatened to put a serious wrench in the longevity works. After playing Harley Quinn in "Suicide Squad," Margot says she got death threats and found herself being stalked. "You're about to be in a comic book film; now here's the worst-case scenario of how big and scary it can get," she says, offering advice to other young actors. "There's just all this stuff you learn along the way, like, when you get those death threats, it's [smart] to have a security team do a background check on whoever sent them to see if there is any past history of violence because you'll need to know whether you need security to go to certain events. And every time you do a background check, it's going to cost $2,000, so take that into consideration when you're getting yourself into this."

Is Harvey Weinstein planning a secret Hollywood appearance over Golden Globes weekend? That's what some celebs appeared to be afraid of this week after a handful of social media posts suggested the former producer was hanging around a central Globes-activity hotspot. "It is Very strange, that Harvey Weinstein is at the very same hotel in Beverly Hills that the golden globe press is being done at. I smell a Rat," read posts on Facebook and Twitter pages attributed Rosanna Arquette (via the New York Post). Ellen Barkin apparently caught wind of the rumor and replied, "Is serial rapist harvey weinstein in los angeles? on the wknd of the Golden Globes. Why? WHy? WHY?," adding, "I forgot to say 'alleged'…because i know better." Reps for Harvey, however, denied the reports, telling the Post it was "false" information that Harvey was in Los Angeles. Through his reps, he has continued to deny, as they put, "allegations of nonconsensual sex." The Golden Globes air Sunday, Jan. 7. 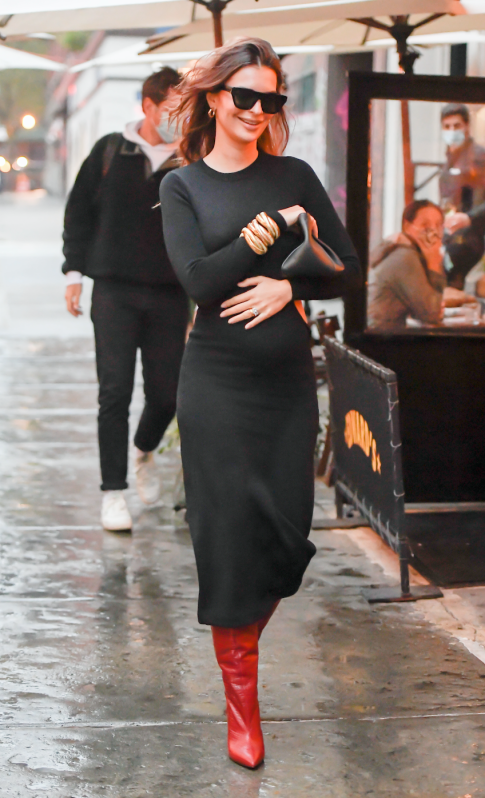