"Amy Schumer: The Leather Special" debuts on Netflix on March 7, 2017. In honor of the comedy special, Wonderwall.com is taking a look back at the funnywoman's biggest career moments. Keep reading to relive Amy's greatest hits…

In 2001, Amy Schumer made her acting debut on the pilot for "North Hollywood," a Judd Apatow-created series for ABC about struggling actors living together in the Los Angeles area. The network never aired the show, but it was a big break for the aspiring actress nonetheless!

After graduating from Towson University in 2003 with a degree in theater, Amy Schumer moved back to her hometown, New York City, and launched her career as a stand-up comedian.

Amy Schumer reportedly made her Gotham Comedy Club debut on her 23rd birthday, June 1, 2004. (The iconic New York City venue has featured many of the biggest names in comedy over the years.)

In 2007, Amy Schumer appeared on an episode of Comedy Central's "Live at Gotham." Later that year, she competed on the fifth season of "Last Comic Standing." She came in fourth place; Jon Reep ultimately took top honors.

In 2008, Amy Schumer competed on Comedy Central's "Reality Bites Back." The following year, she appeared on episodes of "Cupid" and "30 Rock" and performed on "Late Night with Jimmy Fallon" (pictured).

In 2009, Amy Schumer starred as a Southern belle with a sweet tooth in a commercial for Butterfinger Snackerz.

In 2010, Amy Schumer starred on her very own episode of "Comedy Central Presents." That same year, she signed on to co-host Fuse's "Hoppus on Music," a music-themed talk show centered around blink-182's Mark Hoppus. She wrote for the show through 2010 and continued appearing on it until May 2011.

In 2012, Amy Schumer portrayed Trish during the third season of Adult Swim's "Delocated" — her first recurring role on television! That same year, her stand-up special, "Amy Schumer: Mostly Sex Stuff," debuted on Comedy Central. She also had blink-and-you'll-miss-them roles in three films: "Seeking a Friend for the End of the World," "Price Check" and "Sleepwalk with Me."

"Inside Amy Schumer" debuted on Comedy Central on April 30, 2013. As of early 2017, there have been four seasons of the sketch comedy series, which the funnywoman also writes, produces and has directed. (It's currently on hiatus.) Amy also executive produced and appeared in the 2013 all-female comedy special "Women Who Kill."

In 2014, Amy Schumer became an Emmy nominee when "Inside Amy Schumer" was nominated for Outstanding Writing for a Variety Series.

Amy Schumer's "Trainwreck" debuted in theaters in July 2015. The funnywoman wrote, produced and starred in the hit comedy, which scored an 85 percent fresh rating with critics on Rotten Tomatoes and grossed $110 million at the box office. As part of her promotional duties for the film, Amy appeared on an episode of "The Bachelorette" and hosted an episode of "Saturday Night Live."

In September 2015, Amy Schumer opened for Madonna on three stops of the superstar's Rebel Heart Tour in New York City. The following year, Madonna returned the favor by opening for Amy when she brought her comedy act to Madison Square Garden — and became the first female comedian ever to sell out the iconic venue.

In 2016, Amy Schumer earned her first Golden Globe nomination for her performance in "Trainwreck."

In August 2016, Simon & Schuster published Amy Schumer's New York Times bestselling non-fiction book "The Girl with the Lower Back Tattoo," a collection of essays written by the funnywoman.

Amy Schumer pulled Goldie Hawn out of retirement for "Snatched," which is set to debut on May 12, 2017. The mother-daughter comedy will be the "Overboard" star's first film since 2002's "The Banger Sisters." She and Amy presented an award together during the 2017 Golden Globe Awards. 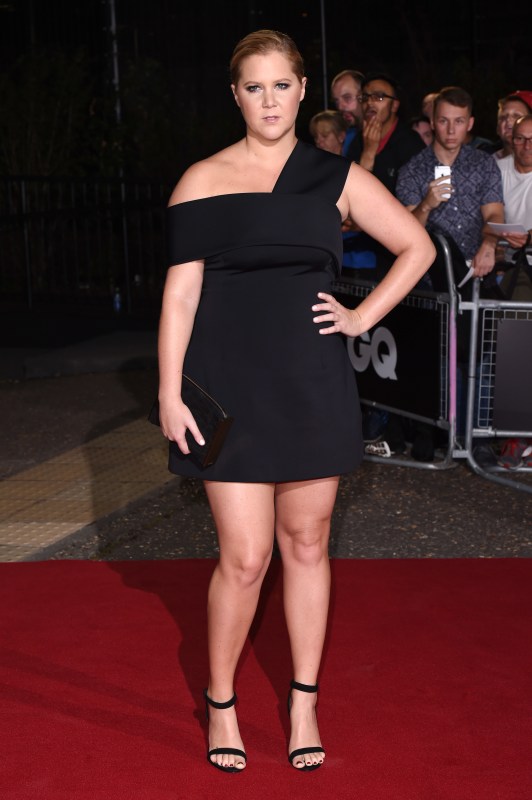 Up Next The Amazing Amy