Get ready for an epic battle of the Ryans! Wonderwall.com came up with the brilliant idea to compare total hunks Ryan Gosling, 36, and Ryan Reynolds, 40. The Canadian movie stars actually have a lot more in common than their smokin' hot looks, or the fact that they're both nominated for Golden Globes in 2017. Keep reading to see how they stack up when it comes to physical appeal, personal moments and career highs. You can thank us later, but for now, just keep reading and start drooling over their steamiest shirtless looks in a movie…

Ryan Gosling: Shirtless in a movie

Ryan Gosling wooed Emma Stone's character — and, most probably every woman watching in audiences worldwide — simply by taking off his shirt and flashing those mesmerizing baby blues in the 2011 flick "Crazy, Stupid, Love." That smirk though…

Ryan Reynolds: Shirtless in a movie

Ryan Reynolds took a less-romantic approach to going shirtless in "The Amityville Horror" in 2005. Still, his sweaty and burly topless scene was just as sexy. We understand if you need to take a few more seconds to get lost in his abs, but then keep reading for the next Ryan showdown category.

Unfortunately, both Ryans do wear clothes the majority of the time that they're in public or on the big screen. But they don't need to get all dressed up to look handsome. Ryan Gosling got our temperatures rising in just a plain white tee after leaving the gym in Los Angeles on May 9, 2015.

Ryan Reynolds rocked a similar relaxed look during a trip to New York on June 2, 2016. But he kicked it up a notch by accessorizing his plain white tee with a newsboy hat, glasses and a trendy backpack. He's got to get extra points for all of the add-ons.

If you thought the Ryans looked hot in a simple T-shirt, just take a look at 'em when they put a bit of effort into their ensembles — no tux needed! Ryan Gosling wore a casual cream-colored suit for the New York screening of "Only God Forgives" on July 16, 2013. He kept the look laid-back and sexy with an open neck and no tie.

Maybe Ryan Gosling took a few pointers from an almost-identical outfit that Ryan Reynolds wore for the Madrid premiere of "Green Lantern" on July 21, 2011. The only differences were that Ryan G. chose a white button-down and kept his jacket closed, whereas Ryan R. went with a gray shirt and an open jacket. Regardless, those few undone buttons on both of the boys really sent the looks into hotness overdrive.

We've now seen that these A-list cuties can basically look great without any clothes on or in everyday apparel. But what about when they pull out all the stops and step out in formalwear? Ryan Gosling stole hearts in a retro-look blue tuxedo at the 2011 Cannes International Film Festival. Especially with the bow tie, the outfit totally embodied Old Hollywood flair.

There's not a lot that's cuter than a hunky man with his dog. Ryan Gosling brought his furry friend — extra points for being a rescue — along on a trip, walking him through LAX Airport on June 17, 2011. Let's just all swoon over the fact that he didn't want to leave home without his pup.

Ryan Reynolds looked uber-cool rocking shades while on a stroll with his pooch, Baxter, in New York City on April 14, 2012. How could we not love the actor even more for rescuing the golden retriever mix from a shelter? In 2010, he went to a Houston ASPCA looking for a pup for his pal and ended up falling in love with his current best friend.

Ryan Gosling had our hearts going vroom, vroom when he let out his bad-boy side for the 2012 movie "The Place Beyond the Pines." As if riding a motorcycle around New York wasn't enough to get us feeling some type of way, cool bleached-blond hair and a ton of tattoos added extra elements of sexy mischief.

Not to take away from Ryan Gosling's fierce biker look for a movie, but Ryan Reynolds rides a motorcycle on — and off — the big screen. "When I'm in a car, I can't wait to get there," he told Hypebeast in 2016. "When I'm on a bike, I can't wait to not get there." That's pretty hot.

Ryan Gosling: On- and off-screen loves

Both Ryans ended up madly in love with their on-screen leading ladies! Ryan Gosling started dating Eva Mendes, 42, after they met on the set of the 2012 movie "The Place Beyond the Pines." The gorgeous couple has kept their relationship as under-wraps as possible though. We're not even sure if they've tied the knot yet.

Ryan Reynolds: On- and off-screen loves

Ryan Reynolds had a hot Hollywood romance or two before meeting his current wifey. He broke off his engagement to Alanis Morissette in 2007 and got divorced from Scarlett Johannson in 2010. But that same year, he met beauty Blake Lively, 29, on the set of "Green Lantern." Two years later, the lovebirds got hitched.

Ryan Gosling and Eva Mendes avoid getting mushy-gushy in public. The most PDA we've ever gotten from 'em is a few hand-holding sessions, like this one during a romantic lunchtime stroll in New York City on May 10, 2012.

Ryan Reynolds, on the other hand, should consider getting a room with Blake Lively! They don't tend to hold back with their affection whether it be smooching on the red carpet or sharing an intimate embrace at a friend's Fourth of July celebration. Wherever they choose to show their love, we think its super-sweet.

Ryan Gosling and Eva Mendes have two daughters: Esmeralda Amada, 2, and Amada Lee, who will be 1 in April 2017. But the private couple has kept their girls completely out of the public eye. On a 2014 episode of "The Ellen DeGeneres Show," the talk-show host created a mockup of what their child could look like since no photos had ever been revealed. Their choice to maintain their children's privacy commands respect.

Ryan Reynolds and Blake Lively also have two daughters: James, 2, and Ines, who arrived in September 2016. They too have tried to keep their kiddos out of the spotlight as much as possible, even choosing not to announce their girls' names after each birth. But Ryan couldn't resist bringing his little ones to his Hollywood Walk of Fame star ceremony in Los Angeles on Dec. 15, 2016, where they finally made their public debut. The adorable factor is on overload.

Way back in 1993, Ryan Gosling got his start as an adorable little 12-year-old Mouseketeer on Disney's "The All New Mickey Mouse Club." He acted, sang and danced alongside the likes of other up-and-coming stars like Britney Spears, Christina Aguilera and Justin Timberlake. It wasn't until the early 2000s that he broke out of the family-TV bubble into more serious movie roles in projects like "Remember the Titans" and "The Believer."

Ryan Reynolds also got his start in the biz as a youngster on TV. In 1991, he made his debut on a Canadian teen series called "Hillside." The show was later renamed "Fifteen" and became more popular, airing in America on Nickelodeon. He started to branch out into movies later on down the road, starring in projects like "Van Wilder" in 2002, "Just Friends" with Amy Smart in 2005 and "Definitely, Maybe" in 2008.

Ryan Gosling became a household-name heartthrob after starring alongside leading lady Rachel McAdams in the 2004 tear-jerker "The Notebook." The movie became an instant romance classic and the public began obsessing over the on-screen couple in real life — because they got together after it wrapped and went on to date for two years. As if being able to Netflix the movie again and again isn't enough, there's always that one time they reenacted their passionate kissing scene after winning Best Kiss at the 2005 MTV Movie Awards.

In 2009, Ryan Reynolds found even more fame when he took to the big screen in "The Proposal" with one of his best leading ladies to date, Sandra Bullock. Their witty banter and romantic chemistry made for one heck of a love story. Ryan was still with Scarlett Johansson at the time, and Sandy was with her now-ex Jesse James, so nothing ever happened between them off-screen… that we know about.

Ryan Gosling most definitely wins in the nominations department. He was up for an Oscar for his work in the 2006 film "Half Nelson." And he's got a whopping five Golden Globe nominations under his belt, one of which could become a win at the 2017 show: He's in the running for his performance in his latest flick with Emma Stone, "La La Land."

Ryan Reynolds doesn't have quite as many nods as his counterpart Ryan Gosling… yet! As of now, he's been nominated for just one Golden Globe for his work in "Deadpool." Coincidentally, he's up against Mr. Gosling for Best Performance by an Actor in a Motion Picture, Musical or Comedy at the 2017 ceremony. We'll just have to see who wins when they duke it out in this next battle of the Ryans! 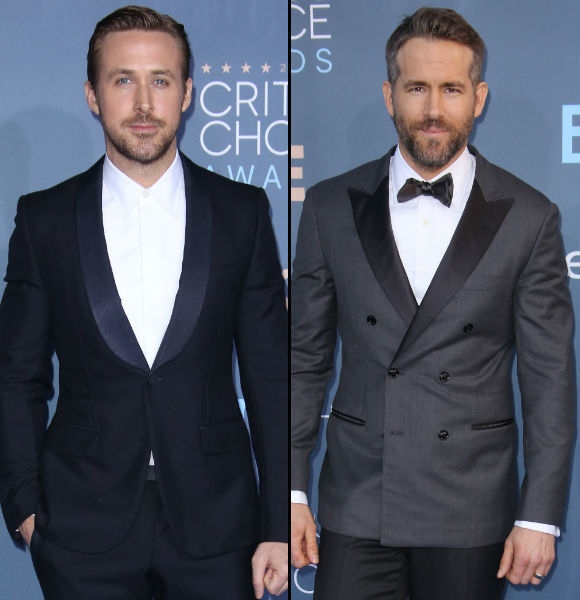 Up Next Ryan Battle!