At first glance, it might seem like the only thing you could say about Cher's clothes would be, "Well, that looks exactly like something Cher would wear." Take a closer look, however, and you'll find the ageless wonder has continuously evolved since her days with Sonny. She's hit both highs and lows and never failed to make jaws drop in either case. So in honor of her 70th birthday on May 20, 2016, we're taking a look at Cher's passion for fashion, starting with this iconic number she wore on a '70s-era poster. It's a barely there dress that might look more fitting strewn over a Christmas tree, but because it's Cher (and because it's on her body at its most bangin'), it works. Click through to see our retrospective of her eye-catching style through the years…

Few stars have shown as much at the Academy Awards since Cher wore this Bob Mackie gown in 1988. But had anyone scoffed at this display of skin and sequins, Cher could have put them in their place by simply showing off the Oscar she picked up that year for her performance in "Moonstruck."

However, not even Cher can pull off every look. This dress, which the star wore to the 2008 Grammy Awards, makes her look more like the molten-metal villain from "Terminator 2." Run away, John Connor!

Cher donned a Native American-inspired costume to promote her single "Half-Breed." While the look might seem un-PC today, 1973 was a different time — plus Cher claimed that she was one-sixteenth Cherokee on her mom's side, although that claim was widely disputed.

Did you know that Cher played a temple maiden in "Conan the Barbarian"? What's that? She didn't? Huh. Then we can't imagine why she had this in her closet. But considering she was 56 years old when she wore this… damn.

We call this wild, Western-inspired outfit "Symphony in Turquoise." It's a nice intention, but we're disappointed that Cher sported faux chaps instead of just wearing the real thing.

The eternal dilemma when it comes to Cher's wardrobe: Halloween costume or year-round garment? With Cher, you can never be certain. She wore this Cleopatra-style dress to promote her signature fragrance back in 1988.

What do you get when you cross Cher and a golden cocker spaniel? This. We prefer Cher with long, dark tresses; the additional golden glitz just adds insult to injury.

This promotional still comes from Sonny and Cher's 1967 film "Good Times" — a flop. And that's too bad, because this striped-pajama look takes us to the sweet, sunny '60s — even when we look at it in a black-and-white photo. Bonus points for the inexplicable tiara.

Cher — seen here in 1986 after she presented the Best Supporting Actor Oscar to Don Ameche, who won for his work in "Coccoon" — again donned an ensemble that no one else could pull off. On a regular woman, it would look like Vegas showgirl-meets-evil-queen from "Sleeping Beauty." On Cher, it's just simply Cher, with the daring headdress embodying her show-stopping style.

Uh… let's get physical? Actually, no — let's not. We're scared Cher's suspenders might pop loose and take out someone's eye.

Sometimes Cher's outfits transcend good and bad, tasteful and over-the-top, fashion and costume. Performing in Germany in 2004, this stunner utilized glitz and trim to achieve a look that's both regal and tacky at the same time.

Vibing more gloomy than glam, Cher's Morticia Addams-looking outfit at the 2010 Golden Globe Awards made us realize that this lady has raised the fashion bar so high that a wild outfit for most celebs can look almost hum-drum on her.

Then there's this: Cher's famous "If I Could Turn Back Time" bodysuit. It's a look so classic that it looked just as good in 1989, when the song debuted, as it did in 2010, when she wore it to the MTV Video Music Awards and showed up Lady Gaga and her ridiculous meat dress.

Let's take a moment to talk about those wide-leg pants, the cowboy hat in her hand, her bizarre brown jacket and the many layers of turquoise jewelry. Clearly, Cher wanted to dress like a wilderness-loving hippie at the 2011 premiere of "Zookeeper."

Just because Cher looks so fabulous at this stage in her life doesn't mean she can still dress like a 20-year-old. Back in September 2013, the singer stepped out in short shorts, fishnet tights and this strange leather jacket.

Gold headpiece. Pleated black skirt. Leather pants. Crazy curly 'do. Sheer sleeves. All of these things are the key components of one of Cher's everyday ensembles.

This ensemble is one of Cher's many costume changes on her Dressed to Kill tour. From the extreme headdress to the sheer bodysuit to the colorful pieces of fabric hiding her lady bits, everything about this ensemble is frenetic.

Oh look, she can do demure too! Cher looked almost dressed down for her red carpet turn at the Met Gala in 2015 when the event featured a "China: Through the Looking Glass" theme. The floor-length ensemble ensured she was largely covered, but the low-cut neckline did show off a little of her décolletage.

Cher was like a cross between a cowgirl and a hippie as she stepped out for an appearance on "The Late Show With David Letterman" in May 2015. She teamed a beige bandana with a white fringed top and completed the look with drop-crotch pants and suede boots.

The singer turned the airport into her runway (of sorts) in July 2015 by wearing a statement psychedelic top complete with floppy hat as she arrived at LAX in Los Angeles. She was still quite the casual traveler, though, with her comfy blue jeans. This is one of the last photos of Cher out in public to date. So let's hope she's been working on a cracking outfit to celebrate her 70th birthday — because you know Cher won't disappoint. 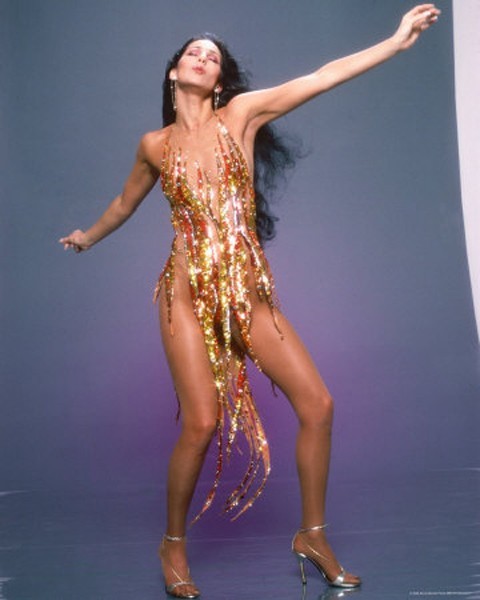 Up Next Cher Fever