Selena Gomez has nothing to hide when it comes to the inspiration for her new songs, "Lose You To Love Me" and "Look At Her Now," which she released this week. Speaking to Ryan Seacrest on his Sirius Radio show, she seemed pretty open about the fact her on-off ex, Justin Bieber — who married Hailey Baldwin shortly after splitting from Selena — factors into the lyrics of both. "From going from there to where I am now is the greatest feeling," Selena said, according to the Daily Mail. "It's actually perfect timing because I was going to release it two years ago and none of the words that I'm speaking would have existed. So taking a moment to actually feel the feelings that I've gone through, it's just — I don't know — I'm just so grateful that it's out. It's weird too because I wrote this song over a year ago … and it's like I feel completely different from when I wrote it," she continued. "It would have been too hard to release it when it was written, now it's fun, I am smiling. It's all the feelings right? It's everything from happy to emotional to realizing it and being frustrated. I wanted to validate all those feelings." Asked if it was difficult to see Justin move on with Hailey, Selena said she's "experienced that a million times before," and called the public nature of the split "the unfortunate part about what I do." She added: "It's all very real to me and I'm sure it's just entertainment for other people; but I think I had become numb to it and it would be stupid of me if I didn't acknowledge what I had felt because it would be inauthentic and that's everything I claim to be and do … everyone writes about something they felt … and the biggest topic is love, and, in a way, it's not something negative. It's actually something positive that I was able to experience that was as beautiful and ugly as it was. I think it's beautiful I've been able to turn this into a new chapter."

In the wee hours of Friday, Oct. 25, Kanye West tweeted a thank you to fans for "being loyal and patient" as he continued to delay the release of his new album, "Jesus Is King." Said the rapper, "This is gonna be radical what I'm about to say, we can look at it in the edit. There were times I was asking people to not have premarital sex while they were working on the album. I know that's one where The Shade Room will be like 'what you mean not have premarital sex!?' But seriously there's times I went to people that were working on other projects and said could you just work and focus on this? … I mean it's known when people pray together, families that pray together stay together. When people pray together and fast together, the power is increased." Collaborators on the album include Clipse, Ty Dolla $ign, Kenny G and Timbaland.

Brad Pitt's not off the hook with regard to a case filed against his Make It Right Foundation over claims the homes that were built in New Orleans after Hurricane Katrina were unsafe and poorly constructed. Brad and other directors from the organization filed asking to be removed from the suit, but according to the Times-Picayune, the request was denied. The complaints reportedly center around the materials used to build the homes, which are alleged to have caused, "mold, poor air quality, structural failures, electrical malfunctions, plumbing mishaps, rotting wood and faulty heating, ventilation and cooling."

Harvey Weinstein comes out of hiding for a comedy show

With his rape trial just around the corner in early January, Harvey Weinstein has been stepping out in New York City repeatedly in recent weeks, taking in multiple comedy shows and, on at least one occasion, enjoying dinner at Cipriani Downtown, which is reportedly owned by an old friend. Wednesday, Oct. 23, marked his second appearance at the Downtime Bar, according to The Hollywood Reporter, which claims the former producer was on hand for a suicide prevention fundraiser. During one female comic's set, he was pointed out from the stage, sparking a mix of boos and cheers. "The crowd seemed to be this naive group of young hopefuls who still think that Harvey Weinstein is a person who is going to fund their project or get them into a movie," comedian Kelly Bachman told THR. "It felt like this sad attempt to re-kindle his old life." Harvey's rep told the outlet of one of his nights out that he was "trying to find some solace in his life that has been turned upside down." The outings come on the heels of Harvey's recent divorce from Georgina Chapman. He was previously spending most of his time at his home in Connecticut, according to the website.

Lady Gaga may have been teasing new music or simply making a statement, but her "fame is prison" tweet on Thursday, Oct. 24, was not warmly received by at least one person who has firsthand experience of life behind bars. After Gaga wrote simply, "fame is prison" on Twiter, hundreds of users replied with comments ranging from criticism of the singer to support. Amanda Knox who was acquitted after being convicted of murdering her roommate in Italy, was among them. "I hear you," Amanda wrote (via Page Six), "but…prison is prison." As of Friday, she had not yet elaborated on the meaning of her post.

Harry Connick Jr. gets a star on the Walk of Fame

Singer, pianist and talk show host Harry Connick Jr. earned a star on the Hollywood Walk of Fame this week, and his wife of more than 20 years, Jill Goodcare, was by his side, along with their three daughters. "Among the many folks who have gifted the world artistic treasure, some have been blessed with such degrees of genius and originality, it sets them apart," Renee Zellweger said during the dedication ceremony, according to UPI. "Not every generation is blessed with an original, but we are and since he is standing right here conveniently, let's embarrass Harry with the evidence."

Women aren't the only ones who can be sexually harrassed. Nick Jonas was on the receiving end of some unwanted attention from a female fan at his show this week, according to video posted by fans (via E! News). The incident occurred while the Jonas Brothers were performing "Only Human." As they sang, a fan reached onto the stage and grabbed Nick's leg repeatedly. After the singer attempted to swat the person's hand away, it returned. He finally shot the fan a look, but it's unclear if they were removed.

Why isn't Big Freedia in Kesha's 'Raising Hell' video, despite being on the track?

Big Freedia, the New Orleans-based rapper whose flow can be heard — but whose face cannot be seen — on videos for Beyonce's "Formation" and Drake's "Nice For What," among other hits, has been removed from another pop song on which she's featured. Jezebel noticed that Kesha's new country-meets-gospel and bounce track, "Raising Hell," distinctly features Freedia's voice. The video for the song, however, does not include her. As Jezebel points out, it's becoming a trend. Speaking to the Fader about Drake's song in April, Freedia was nothing but polite and graceful when prodded about her voice being included in the song. "We're [steadily] moving forward to get the bounce culture even further out there and, as you can see, other artists are recognizing our music and our talent down here in New Orleans," Freedia said. "One day we might get our category at these awards or on the charts. I've worked tremendously hard to make things happen for New Orleans culture. I just want us to get the proper recognition and the proper credit that we deserve." She added: "You know, my voice be on a lot of different stuff and people want to use bounce music as a part of their music but when it comes to the proper recognition of me being in the video, that's something that we're steady working towards to make it happen."

The romance between Al Pacino, 79, and Israeli star Meital Dohan, is still going strong. The couple, who reportedly started dating more than a year ago, stopped by the Los Angeles premiere of "The Irishman" this week — with Al's 18-year-old daughter, Olivia Rose, the Daily Mail reports. Al was previously involved in a relationship with Lucila Sola, 43, whose daughter, Camila Morrone, is dating Al's pal and "Once Upon a Time in Hollywood" costar, Leonardo DiCaprio.

On his December 2017 track, "Framed" Eminem raps, "Agent Orange just sent the Secret Service/ To meet in person to see if I really think of hurtin' him/ Or ask if I'm linked to terrorists / I said, 'Only when it comes to ink and lyricists.'" Turns out he really was visited by the Secret Service. According to Variety, a TMZ reporter contacted the organization and asked if it was aware the rapper included "an inappropriate comment towards President Donald Trump and a threatening comment towards Ivanka Trump" in the song. As a result, Variety reports, the Secret Service went to see Eminem and ask him directly about it. The organization determined Em was not really a threat to Trump and went about their business. But not before including a tidbit in their report about what happened when they asked about the specific lyrics: "Mathers was familiar the song," the Secret Service reported, "and began rap along with the interviewers as the verse was read." So go ahead and mark Jan. 16, 2018, the day of said visit, as the only day you will ever have wished you were a member of the Secret Service. 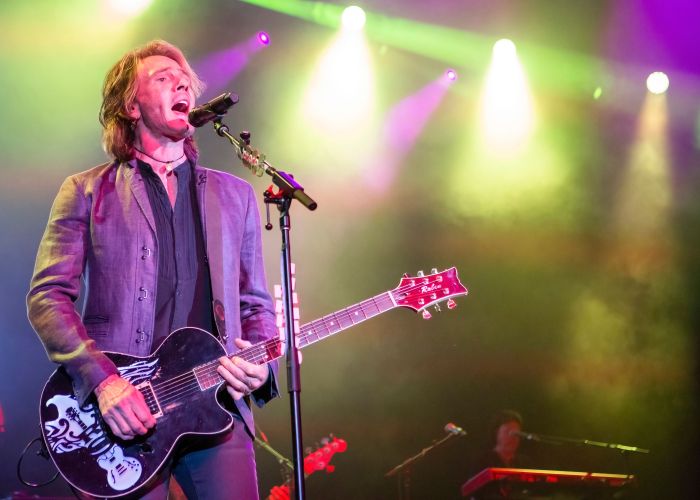