And the maid of honor is …

No spoiler alert necessary on this one … Sophie Turner revealed at this week's "Game of Thrones" premiere who her maid of honor will be when she marries Joe Jonas at their upcoming nuptials — and we'll give you exactly one guess as to who it is. Yep, her longtime bestie, Maisie Williams is set to take on the big role. Sophie did sound a little concerned, however, when ET mentioned Maisie is still trying to settle on what she'll wear to the wedding. "I don't know why she's thinking about [what she's wearing]," Sophia said, seeming confused. "I'm giving her the bridesmaid dress! She's my maid of honor! One of two." Meh, maybe Arya Stark's got the gown — she's just undecided about which of those "Faceless Men" faces goes best with the color …

Snooki got some mom-shaming on Instagram this week after she shared a photo of her family — including her husband, Jionni Lavalle, and their kids, Lorenzo, 6, and Giovanna, 4 — to Disneyland. The photo showed the kids in strollers, which turned out to be a sticking point for trolls. "Omg my kids would never be in a stroller that big," one user wrote, according to Us Weekly. "3 kids and have done Disney 3 times. If you're over 2, you're walking. And I've never lost anyone," wrote another. A third sniped, "All of them kids know how to walk," which may have been the final straw for Snooki, who chimed in: "They walk! But in large crowds I prefer they sit their a—- down. Saves me the stress of not losing my offspring."

RELATED: 'Jersey Shore' cast: Where are they now?

Bethenny Frankel still carries guilt and anxiety in addition to grief when it comes to the death of her ex and longtime friend, Dennis Shields, who was suspected of having overdosed last summer, although officials have ruled his cause of death "undetermined." In this week's edition of "The Real Housewives of New York City," the Skinnygirl founder opens up to her therapist how their complicated relationship and what she continues to struggle with. "I mean, it's really brutal — he was really someone that I went to for everything,. So him being gone is a massive void and I really can't believe he's gone," she says, according to the Daily Mail. "He had such a powerful force in my life, and [was] such a loving person, and my daughter [Bryn, 8] loved him, that it was like this whole thing that was hard to extricate myself from." The pair were friends for almost 30 years before they started dating on and off, and as Bethenny says on the show, the issues they had as a couple led her never to give him in an answer when he proposed prior to his death. "I had just said the Saturday before – I have to exit this dynamic. There was a lot in my mind about him dying right after that. I could not get off the ride. I feel guilty that the only way I got off the ride is that he's dead … but I hope I didn't have anything to do with him dying," she admits. In another segment of the show, Bethenny says, "Dennis told me if we didn't work out, he was never going to be in a relationship again," calling the statement "a tremendous pressure, and it kept me in." Ultimately, she says she hates not knowing if he intended to die: "I don't know what happened that night and I will always have to live with that for whatever that means."

RELATED: Bethenny Frankel and Jason Hoppy's therapist quit over their 'level of conflict'

Birthday love! When Robert Downey Jr. turned 54 on Thursday, April 4, his long-running "Iron Man" costar, Gwyneth Paltrow helped him celebrate with a throwback kiss on Instagram. "Happy Birthday @robertdowneyjr I love you to the moon and back. Love, your 🌶," wrote Gwyneth, who played Pepper Potts in the series. It was actually quite the "Avengers" birthday for RDJ. Mark Ruffalo shared a photo of Robert kissing his cheek, thanking him for his "kindness, leadership and generosity." And Robert himself shared some "Avengers" goodness — an image by Bosslogic of the franchise's stars, with RDJ in the middle, recreating da Vinci's "The Last Supper."

Is Olivia Wilde done with acting?

Olivia Wilde has officially caught the directing bug. Her new film, "Booksmart," a comedy about two overachieving high school seniors who indulge in a night of bad ideas before graduation, quickly garnered a 100 percent perfect score on Rotten Tomatoes — and that's on top of critical praise following the movie's SXSW premiere. "It's kind of blowing my mind," she recently told The Hollywood Reporter of the score. She shot the movie, her directorial debut,. in just 26 days, which begs the question whether its success will set her on a permanent path of directing. "Acting is cathartic, incredibly fun and it only gets better when you don't have to do it out of necessity," she told THR. "But at this point, directing is a powerful discovery for me. So for the foreseeable future, I really just want to direct as many movies as I can."

Their marriage may have been tumultuous but Denise Richards still runs major life decisions by her ex, Charlie Sheen, when it make sense. That includes her decision to join the cast of "The Real Housewives of Beverly Hills. "I did talk to him about it, because as an actor in this business I respect his opinion,'" Denise told Bruce Bozzi on his SiriusXM Radio show this week. According to Denise, Charlie gave her two thumbs up, saying, "I think it could be really cool." She cautioned that "even if he said, 'I think this is the dumbest thing you ever did,' I still would have done the show, but said, "I have a lot of respect for him as the father [of my kids] and also being in this business for as many years as he has." As Denise, who married Aaron Phypers in September, recently told People: "I was never bitter about my divorce. Going through everything, it changed me. But I love life and I'm a glass-half-full kind of person. And I did my best to rise above it."

Colin Farrell reveals why he's nixing all his tattoos

Colin Farrell us going ink-free. As he told James Corden on "The Late, Late Show" on Wednesday, April 3, he's sick of the amount of work it takes to hide all his tattoos for every movie. "I'm getting rid of them because I got tired of getting painted in the makeup chair anytime I wear a t-shirt, it buys me an extra 45 minutes sleep in the morning," he explained (via JustJared). "Obviously, none of them had that much significance to me that I would choose 45 minutes over my own history!" By way of an example of said insignificance, he said one of his tats was obtained "in New York one night at 3 a.m. at a tattoo parlor by somebody I don't think has ever done a tattoo before. It was a rose but it actually looks kind of like a cat's a—— on a chopstick." That alone seems like a good excuse to ditch the body art.

After suffering through what sounds like the worst hangover onstage, while trying to be funny, it's fair to say Tiffany Haddish has learned her lesson about New Year's Eve partying. The comic got backlash galore for her New Year's Day show in Miami and during a visit to "Jimmy Kimmel Live" this week, she explained what happened. In a nutshell, her friends convinced her to "celebrate [her] successes" by dragging her out even though she knew better. "And I danced all night. I drank more than I've ever drank in my entire life. My kidneys fell out," she told Jimmy (via the Daily Mail). The next day, she said, "I woke up. I thought I was dead. I definitely woke up dead." She made a video about that night's show then headed to the venue, not knowing where it was or anything except that she felt like she was being prepped "for my funeral" when she was in hair and makeup. "I don't know if you know this about Miami," she said near the end of the story, "but that's where the Devil is, and he was trying to snatch my soul out my body that day." She added that anyone with a ticket from the show could come in for free next time she performs in Miami.

Somewhere on a beach in Mykonos today, Lindsay Lohan is weeping. At least, that's our takeaway from the confused comment she left on an official social media page for The Disney Princesses. It seems the announcement that Lea Michele would be playing Ariel in the Hollywood Bowl's upcoming performance of "The Little Mermaid," threw poor Lindsay for a loop, presumably because of her assertion last summer that starring in a movie version of the kids' classic — alongside Meryl Streep (because sure) — would be Lindsay's "dream role." JustJared reports when the Disney Instagram account shared the cast names for the Bowl show, Lindsay chimed in only to say, "Huh?"

Birthday girl Paris Jackson looks healthy and happy in the wake of the "medical emergency" that hospitalized her a few weeks back. The Blast reports the newly minted 21-year-old was smiling and carrying a bouquet of tulips on Wednesday, April 3, while sharing a smooch with her beau, Gabriel Glenn, as they left a grocery store. She previously said on social media she and Gabriel were hoping to go camping and stopped at the store to get some supplies. Their plans, however, didn't pan out, so they went with a night of fish tacos instead. In a sweet birthday post this week, Gabriel, gushed: "It has been the greatest honor and pleasure to share my heart, soul, dreams & bed with you." 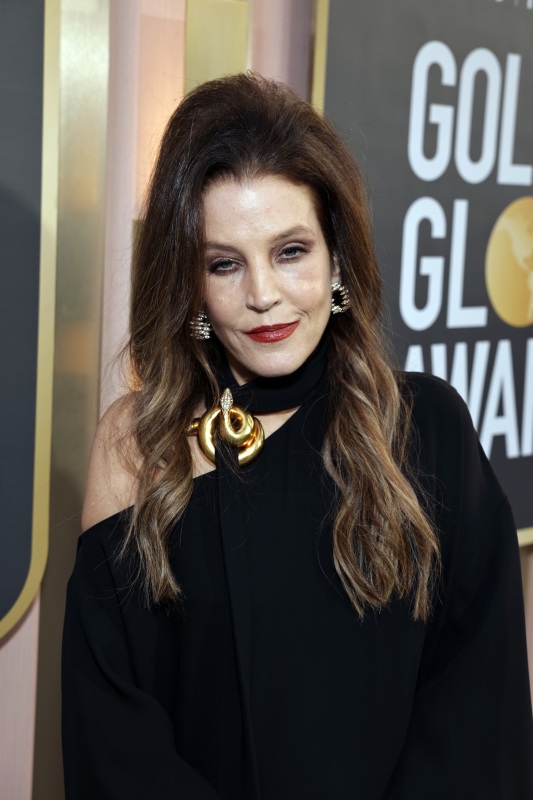