There's no bond quite like the one between mothers and daughters. Whether they get on each other's last nerve or find strength in their shared histories, moms and daughters have something that's truly special. On May 12, 2017, the comedy "Snatched" arrives in theaters. It features Goldie Hawn and Amy Schumer as Linda and Emily Middleton, a mother and daughter forced to work together despite their differences so that they can escape the dangerous South American jungle. In honor of the film and women everywhere, Wonderwall.com has compiled a list of our all-time favorite on-screen mom and daughter duos. Get ready to feel all the feelings…

Who wasn't shocked by the revelation that Mary Margaret (aka Snow White) and Emma Swan from ABC's "Once Upon a Time" were actually mother and daughter? Separated at birth to save Emma's life, the two women reunited decades later when Emma (played by Jennifer Morrison) learned of her magical, fairy-tale roots. Thanks to a spell, Snow White (played by Ginnifer Goodwin) didn't age, making her and her daughter more like BFFs than multi-generational family members.

RELATED: Our favorite "Once Upon a Time" characters ranked

It's impossible to talk about our favorite on-screen mothers and daughters without mentioning Tess and Anna Coleman in the cult classic "Freaky Friday." In a supernatural twist of fate, Tess (played by Jamie Lee Curtis) and Anna (played by Lindsay Lohan) switch bodies and have to live one another's lives to finally understand just how hard it is to be in each other's shoes.

RELATED: How Goldie Hawn has changed through the years

Rainbow (Bow for short) Johnson is the perpetually optimistic mom from "Black-ish" who often doesn't seem to understand how to connect with her daughters, Zoey (the fashionable one) and Diane (the brainiac). Although the girls (played by Yara Shahidi and Marsai Martin) may seem like they're always annoyed by their mom (played by Tracee Ellis Ross), they totally admire her and know she's a source of unconditional support through the good times and bad, which gives them the strength to be exactly who they want to be.

Complicated doesn't begin to describe the push-and-pull relationship between Charlotte and daughter Skeeter in "The Help." Although Charlotte (played by Allison Janney) had nothing but the best of intentions for her daughter (played by Emma Stone), she didn't realize how her own prejudices and stereotypical beliefs about women and race were the force that caused Skeeter to break the social conventions of their time.

We'd be remiss if we didn't mention "Keeping Up with the Kardashians" matriarch Kris Jenner and her beautiful, entrepreneurial-minded daughters Kourtney Kardashian, Kim Kardashian West, Khloe Kardashian, Kendall Jenner and Kylie Jenner. While this super-famous reality TV family has gone through many ups and downs on screen and off, at their core, these daughters know their mom loves and supports them unconditionally and will do anything to help them find their own happiness.

When Adele and daughter Ann move to Beverly Hills in "Anywhere But Here," a difficult dynamic between the two develops. Ann (played by Natalie Portman) is angry she's had to leave the only home she's known, but her mother (played by Susan Sarandon) is hell-bent on realizing her dreams of Hollywood fame, even if that means achieving them through Ann. We love them because they're proof that even when mom is kind of crazy, she still wants the best for her little girl.

Okay, maybe this pair isn't actually an on-screen mother and daughter, but since Season 1 of "Orange is the New Black," we've seen ruthless, domineering Red (played by Kate Mulgrew) soften her hard edges to care for and protect Nicky (played by Natasha Lyonne), a drug addict who's prone to self-sabotage. If putting a hit on your daughter's drug dealer isn't motherly love, we don't know what is.

Gina Norris has big plans, and all of them have to do with creating a happier, more stable future for daughter Vanessa in "Beauty Shop." We love this mom and daughter duo (played by Queen Latifah and Paige Hurd) because they highlight the unmatched strength, love and determination a single mom has to make the world a better place for her child.

After what seemed like an eternity of trying and failing to conceive, Charlotte (played by Kristin Davis) finally became a mother when she adopted sweet, spunky daughter Lily on HBO's "Sex and the City." Under Charlotte's caring and supportive wing, Lily (played by twins Alexandra and Parker Fong) emerged as a talkative, often hilarious young lady who wasn't afraid to say what everyone was thinking.

Daphne Wilder is the meddling but well-intentioned mom of three daughters — Maggie, Milly and Mae — in the film "Because I Said So." Together, these strong, independent sisters (played by Lauren Graham, Mandy Moore and Piper Perabo) learn to navigate life on their own terms and find love, even when their mom (played by Diane Keaton) has her own ideas.

When we first met Sonu Lahiri, Mindy Lahiri's theatrical-minded mom on "The Mindy Project," we got a first-hand glimpse of exactly where Mindy's over-the-top personality came from. Although Sonu (played by Sakina Jaffrey) has big dreams for herself, she has an endless well of love and encouragement for her daughter (played by Mindy Kaling), which gives us all the maternal feels.

If we had mother-daughter goals, it would be thanks to Lorelai and Rory Gilmore of "The Gilmore Girls" and, most recently, "The Gilmore Girls: A Year in the Life" reboot on Netflix. These quick-witted, coffee-slamming women (played by Lauren Graham and Alexis Bledel) embody everything that's amazing about a relationship between a mother and daughter: wisdom, laughter and a necessary bit of weirdness for good measure.

"Roseanne" offered the world a window into the day-to-day lives of an everyday middle class family. No relationship on the show was more real and raw than the one between Roseanne and daughter Becky. Whether they were arguing over boys, birth control or grades, actresses Lecy Goranson and Roseanne Barr captured the essence of what it meant to raise a headstrong teenager with humor and sass.

In all of the "Real Housewives" franchises, none have the spark of deep mother-daughter love like "The Real Housewives of New Jersey," especially when it comes to the relationship between Teresa Giudice and her eldest daughter, Gia Giudice. Fans watched in agony as Gia had to grow up too soon while her mother was incarcerated on federal fraud charges, then watched their tearful reunion after Teresa was released from prison and welcomed back into her family's arms.

When we reach our senior years, we can only hope to have the kind of relationship shared by Dorothy and her mother, Sophia, on "The Golden Girls." Not only was Sophia (played by Estelle Getty) full of snark, but she had a warm heart and a great Sicilian marinara recipe. Dorothy (played by Bea Arthur) may have been the more serious of the two, but it was clear she loved her mom above all else.

The complicated relationship between Tanya and daughter Akeelah (played by Angela Bassett and Keke Palmer) in "Akeelah and the Bee" is only amplified by Tanya's grief after she's widowed and forced to raise her family alone. What we love most about this complex and uplifting story is that even the best mothers make mistakes and can learn important life lessons from their daughters.

The hit Netflix streaming series "Grace and Frankie" features our newest favorite mother-daughter duo: Grace and Brianna (played by Jane Fonda and June Diane Raphael). Grace may be uptight, but she has endless patience when it comes to her blunt, in-your-face daughter — who totally gives us aspirations to speak our minds to our own moms (if we weren't sure we'd be dead right after). 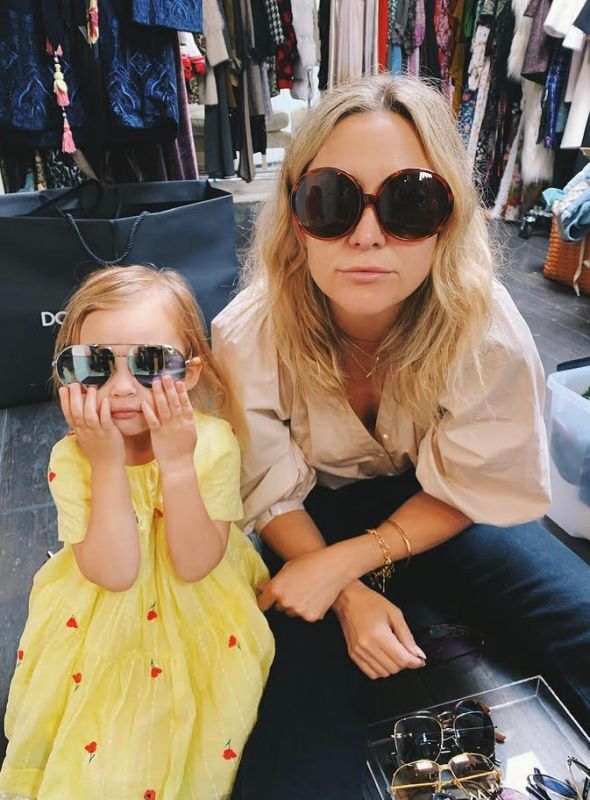