On Nov. 12, 2019, the long-awaited live-action remake of the 1955 animated adventure "Lady and the Tramp" arrives exclusively on Disney's new streaming entertainment platform, Disney+. In anticipation of the film's release, Wonderwall.com is taking a look at the stars of this heartwarming doggy drama to find out who's playing whom. Keep reading for more…

RELATED: A guide to all the new content coming to the Disney+ platform

In the 2019 live-action remake of "Lady and the Tramp," Tessa Thompson lends her voice to Lady, the American cocker spaniel from a well-to-do family who embarks on an unlikely adventure with a streetwise mutt named Tramp.

We first met Tessa Thompson in 2005 when she played Jackie Cook on "Veronica Mars." Today, Tessa's better known for playing Valkyrie in "Thor: Ragnarok" and "Avengers: Endgame" and as Charlotte Hale on the HBO series "Westworld." In 2019, Tessa returned to the big screen with her Marvel co-star Chris Hemsworth in the sci-fi comedy adventure "Men In Black: International." Following her voice role in "Lady and the Tramp," Tessa has a busy few years ahead: She'll appear in the romance "Sylvie" and the thriller "Passing" in 2020 followed by 2021's "Thor: Love and Thunder." Tessa, who's openly bisexual, has declined to discuss her romantic relationships but in 2018, speculation was rampant that she was involved with singer-actress Janelle Monae, and throughout 2019, she's been photographed spending time with British music artist Dev Hynes, aka Blood Orange.

In the Disney+ live-action remake of "Lady and the Tramp," Justin Theroux lends his voice to Tramp, the stray mutt who shows Lady the freedom and adventure that comes with life on the streets.

Justin Theroux's had a long and varied career in Hollywood, beginning with his early work in projects like "Mulholland Drive" and "Zoolander" in 2001. Now, of course, he's well known as a screenwriter, actor and Hollywood hunk with a very famous ex-wife. Justin had a hand in writing the screenplays for box office hits like "Tropic Thunder," "Iron Man 2" and "Rock of Ages." He's also an accomplished TV star with credits in shows like HBO's "The Leftovers" and the miniseries "The Maniac." Never one to be typecast, Justin's enjoyed a string of various film roles over the years, including as Master Codebreaker in 2017's "Star Wars: Episode VIII – The Last Jedi" and as Mel Wulf in the 2018 Ruther Bader Ginsburg biopic "On the Basis of Sex." Following his voice role in "Lady and the Tramp," Justin — who split from Jennifer Aniston in late 2017 — will appear in the 2020 horror flick "False Positive" and the drama "Violet."

In the live-action remake of "Lady and the Tramp," singer-actress Janelle Monae lends her voice to Peg (left) and actor Benedict Wong plays the bulldog aptly named Bull.

Although her big-screen debut didn't happen until 2016 with the Oscar-winning film "Moonlight," Janelle Monae has been in the spotlight for much longer. Her 2003 demo "The Audition" was merely a precursor to her musical genius. In 2006, Janelle released the single "Lettin Go," which she followed with the debut EP "Metropolis: Suite 1 (The Chase)" and the album "The ArchAndroid" in 2010. Since then, Janelle's released two more albums, two additional EPs and more singles than we can count. As an actress, Janelle's been no slouch, either. The same year she co-starred in "Moonlight," Janelle turned up in the Oscar-nominated biopic "Hidden Figures." In 2018 — the same year she released her third studio album, "Dirty Computer," we saw Janelle on the big screen in the biographical dramedy "Welcome to Marwen." 2019 has kept her busy too. In addition to playing Peg in "Lady and the Tramp," Janelle lent her voice to the animated adventure "UglyDolls" and has a co-starring role in the powerful historical biopic "Harriet." Up next for Janelle are two films in 2020: "The Glorias" and a currently untitled comedy from writers Gerard Bush and Christopher Renz. In 2018, Janelle came out as pansexual.

English actor Benedict Wong has a career that stretches back to 1992 — his first on-screen role was in an episode of the British anthology series "Screenplay." Since then, we've seen Benedict in a variety of roles, from Ravel in "Prometheus," Mr. Kim in "Kick-A– 2," Bruce Ng in "The Martian" and Kublai Khan in "Marco-Polo" to Stephen Strange's right-hand-man in "Doctor Strange" and the final two "Avengers" films. In 2019, he kept his forward momentum with parts in numerous film and TV projects including "Deadly Class," "The Dark Crystal: Age of Resistance," "The Personal History of David Copperfield" and "Gemini Man." Following his voice role as Bull in "Lady and the Tramp," Benedict's set to star in the 2020 fantasy drama "Nine Days" and the 2021 Marvel sequel "Doctor Strange in the Multiverse of Madness."

In the 2019 live-action remake of "Lady and the Tramp," actor Sam Elliott lends his voice to Trusty, the elderly bloodhound neighbor who befriends Lady.

Sam Elliott, the Oscar-nominated actor known for his trademark mustache and oaky Southern voice, has memorably appeared in films like "Road House," "Tombstone," "Gettysburg," "The Big Lebowski," "We Were Soldiers," "Hulk," "Ghost Rider" and 2018's "A Star is Born" as well as on TV shows like "Justified," "Grace & Frankie" and "The Ranch." In addition to voicing Trusty in "Lady and the Tramp," Sam also lent his voice in the yet-to-be-released historical documentary "The Gettysburg Address." Up next for this prolific star is the final season of "The Ranch," which is slated to air in 2020. Since 1984, Sam has been married to stage and screen actress Katharine Ross. They share one adult daughter, Cleo Rose Elliott.

In the 2019 live-action remake of "Lady and the Tramp," Scottish actress Ashley Jensen lends her voice to Jackie, the aggressive Scottish terrier known as Jock in the original movie.

Emmy-nominated actress Ashley Jensen rose to fame as Maggie Jacobs on the comedy series "Extras" in 2005 before landing the role of Christina McKinney on "Ugly Betty" in 2006. Since then, we've seen Ashley on shows like "Accidentally On Purpose," "Love & Marriage" and the Amazon Prime original series "Catastrophe" and as a voice artist in films like "Arthur Christmas," "Gnomeo and Juliet" and "How to Train Your Dragon." Since 2014, Ashley's also had the lead role on the mystery-comedy series "Agatha Raisin." Along with "Lady and the Tramp" and two episodes of the drama-thriller series "Trust Me" in 2019, Ashley also reprised her animated character Phlegma for the sequel "How to Train Your Dragon: The Hidden World" and appeared on Ricky Gervais' newest dramedy series, "After Life." Up next for this talented Scottish actress is a role in the big-screen romantic drama "Indian Summer." Ashley lost her husband of 10 years, actor Terence Beesley — with whom she has a son — to suicide in November 2017.

In the live-action remake of "Lady and the Tramp," actors Kiersey Clemons (top) and Thomas Mann star as Lady's human family, Darling and Jim Dear.

Following her breakout role in 2013 — Kira Starr on "Austin & Ally" — Kiersey Clemons quickly added more credits to her resume, including the shows "Transparent," "New Girl," "Eye Candy," "Extant," "Easy" and "Angie Tribeca" and the films "Dope," "Neighbors 2: Sorority Rising," "The Only Living Boy in New York" and "Flatliners." In 2018, Kiersey appeared in three films including the musical comedy "Hearts Beat Loud," in which she also sang. Along with "Lady and the Tramp" in 2019, Kiersey also starred on TV's "Rent: Live," reprised her role as Chase on "Easy," lent her voice to an episode of "BoJack Horseman" and starred in the sci-fi horror flick "Sweetheart." Next up? The 2020 animated adventure "Scoob," the action adventure "Z," and the drama "The Language of Flowers."

Sharing a name with a Nobel Prize-winning novelist means Thomas Mann has some big shoes to fill. He began acting in 2009 but wouldn't land his first major role until 2012's "Project X." Since then, we've seen Thomas in films like "Hansel & Gretel: Witch Hunters," "Beautiful Creatures," "Me and Earl and the Dying Girl," "The Stanford Prison Experiment," "Brain on Fire," "Kong: Skull Island," "Amityville: The Awakening" and 2018's "The Land of Steady Habits." Along 2019's "Lady and the Tramp," Thomas also appeared in the thriller "Them That Follow" and the Netflix original crime biography "The Highwaymen." Up next, Thomas returns to the big screen as John Kennedy Toole in the biopic "Butterfly in the Typewriter."

For nearly 20 years, Yvette Nicole Brown has lit up the big and small screens. Though perhaps best known for her role as Shirley Bennett on "Community" from 2009 to 2015, Yvette's also been on shows like "The Soul Man," "The Odd Couple," "The Mayor" and "Mom" and has lent her voice to a plethora of animated characters including Portia Jones in "SuperMansion" and Luna in "Elena of Avalor." In 2019, Yvette made an appearance in the blockbuster film "Avengers: Endgame." She was also in the romantic comedy "Always a Bridesmaid" and appeared on an episode of "Dear White People" and "A Black Lady Sketch Show." In 2020, we'll get to see Yvette on the big screen again in the drama "Broken Diamonds."

Arturo Castro (left) and F. Murray Abraham star as Marco and Tony, the chef at and owner of the Italian restaurant where Tramp shares a romantic pasta dinner with Lady in 2019's "Lady and the Tramp."

The long and respected career of Oscar-winning actor F. Murray Abraham began in 1960 with his role in an off-Broadway production of "The Fantasticks." His film debut would come 11 years later in 1971's "They May Be Giants." Since then, he's starred in 40 theatrical productions — including 11 Broadway shows — and more than 67 films. Some of his most notable projects include "Scarface," "Amadeus" (which won him an Academy Award and a Golden Globe for best actor), "Mighty Aphrodite," "Finding Forrester" and "The Grand Budapest Hotel." He's also no stranger to television, appearing on series like "The Good Wife," "Louie" and "Homeland." In 2019, along with "Lady and the Tramp," F. Murray lent his voice to the animated adventure "How to Train Your Dragon: The Hidden World," appeared on an episode of "The Orville" and co-starred on the new drama series "Chimerica." Up next, we'll see him on the big screen in the thriller "Things Heard & Seen." F. Murray has been married to author Kate Hannan since 1962. They share two children and one grandchild.

Whether you know Arturo Castro as Jaime, the gay weed-dealing roommate, on "Broad City" or as the devious cartel leader David Rodriguez on "Narcos," chances are you've grown to love this versatile star. After launching his acting career in 2008 — just four years after moving to New York from Guatemala — Arturo landed roles on shows like "The Good Wife," "No Activity" and "Ghost Story Club" as well as in films like "Railway Spine," "Bushwick" and "Snatched." Although Arturo trained as a dramatist, he developed a passion for comedy while on "Broad City." That love for laughter helped him land his own sketch-comedy series, 2019's "Alternatino with Arturo Castro," on which he explores a humorous, Latinx take on world issues like immigration, the president and what it means to be a "woke white person." In addition to his comedy series and "Lady and the Tramp," Arturo also appeared in two films in 2019: "The Informer" and "Semper Fi." Up next, we'll get to see him in the comedic TV movie "Delilah." 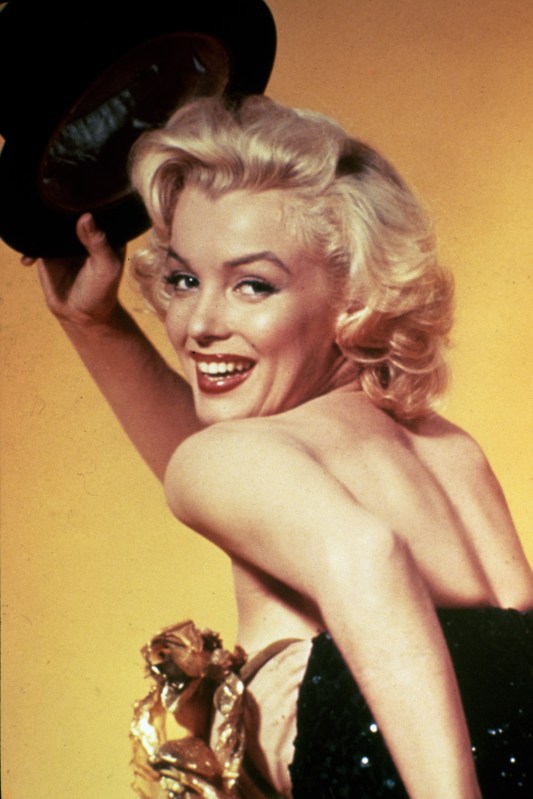 Up Next Blonde Bombshells