Get ready to have the time of your life — again! The "Dirty Dancing" remake debuts on ABC on May 24, 2017, three decades after the original dance film opened in theaters back in 1987. Gear up for the made-for-TV movie, which will be more of a re-envisioning than a direct remake, by reading through Wonderwall.com's guide to the new cast…

RELATED: Stars of the original "Dirty Dancing" — Where are they now?

Abigail Breslin stars as Frances "Baby" Houseman, a sheltered teen vacationing with her family at a posh resort in the Catskills during the early '60s. Jennifer Grey originated the role in the 1987 version of the film.

Abigail Breslin made her acting debut in 2002's "Signs" and shot into the spotlight after starring as Olive Hoover in 2006's "Little Miss Sunshine," for which she earned an Oscar nomination. She went on to star in "Definitely, Maybe," "Zombieland," "New Year's Eve," "August: Osage County" and "Ender's Game." Most recently, the former child star portrayed Chanel No. 5 on "Scream Queens."

Colt Prattes stars as the resort's resident dance instructor, Johnny Castle — a role made famous by the late Patrick Swayze.

Colt Prattes made his television debut on a 2010 episode of "Mercy." He also had a brief stint on the web series "Wiener & Wiener" in 2011, performed the part of Stacee Jaxx in the Las Vegas residency production of "Rock of Ages" and starred in Pink's "Try" music video. Colt married dancer-actress Angelina Mullins in 2013.

Sarah Hyland stars as Baby's older sister, Lisa Houseman, who has an expanded role in the remake. (Jane Brucker portrayed her in the original film.)

Sarah Hyland made her feature film debut in 1997's "Private Parts." She went on to appear in "The Object of My Affection," "Cradle Will Rock" and "Spanglish" and had stints on "One Life to Live" and "Lipstick Jungle" before she scored her big break when "Modern Family" debuted in 2009. She's starred on the sitcom as Haley Dunphy ever since. (The former child star also had roles in "Scary Movie 5" and "Vampire Academy.") Sarah dated actors Max Ehrich and Matt Prokop — whom she later accused of physically and verbally abusing her — before finding love with actor Dominic Sherwood in early 2015.

Nicole Scherzinger stars as Penny Rivera, Johnny's dance partner. The character is based off of Cynthia Rhodes' Penny Johnson from the original "Dirty Dancing."

Nicole Scherzinger first stepped into the spotlight in 2001 when she competed on "Popstars" to win a spot in the girl group Eden's Crush. When they disbanded, she became the frontwoman for The Pussycat Dolls. She's also released two solo albums, popped up on various TV shows, appeared in "Men in Black 3," voiced a character in "Moana," served as a judge on "The X Factor" and won the 10th season of "Dancing With the Stars" with partner Derek Hough in 2010. The multitalented performer, who's struggled with bulimia in the past, has dated Nick Cannon, "Laguna Beach" star Talan Torriero and Dane Cook, was engaged to 311 frontman Nick Hexum, had an off-and-on relationship of around eight years with Formula One driver Lewis Hamilton and romanced tennis player Grigor Dimitrov between 2015 and 2017.

Bruce Greenwood started acting in the late '70s. Since then, he's appeared in "Disturbing Behavior," "Double Jeopardy," "Here on Earth," "Rules of Engagement," "Thirteen Days," "I, Robot," "Capote," "National Treasure: Book of Secrets," "Star Trek," "Super 8," "The Place Beyond the Pines," "Flight" and "Gold." He also had a stint on "Mad Men" and starred on "St. Elsewhere," "Knots Landing" and "American Crime Story." Bruce has reportedly been married to his wife, Susan, since the '80s.

Debra Messing had stints on "NYPD Blue" and "Seinfeld" and starred on the short-lived shows "Ned and Stacey" and "Prey" before she scored her major breakthrough in 1998 when "Will & Grace" debuted. (The sitcom — Debra earned an Emmy for her work on the show in 2003 — will get the reboot treatment in the fall pf 2017.) The eight-time Golden Globe Award nominee went on to appear in "Celebrity," "The Mothman Prophecies," "Along Came Polly," "The Wedding Date" and "The Women" and starred on "The Starter Wife," "Smash" and "The Mysteries of Laura." Debra has a son, Roman, with her ex-husband, "Damages" executive producer Daniel Zelman. She dated "Smash" co-star Will Chase for nearly three years following her divorce.

Katey Sagal stars as Vivian Pressman, a married woman vacationing at the resort who's been having an affair with Johnny. Actress-choreographer Miranda Garrison played her in the original "Dirty Dancing."

Katey Sagal made her acting debut in the early '70s but didn't score her major breakthrough until 1987 when "Married… with Children" debuted. She starred as matriarch Peggy Bundy for a decade. Katey also voiced Leela on "Futurama" between 1999 and 2003, had stints on "That '70s Show," "Boston Legal" and "Lost," starred on "8 Simple Rules" and "Sons of Anarchy," for which she won a Golden Globe, and appeared in "Bleed for This," "Pitch Perfect 2" and "Jack and the Beanstalk." Katey had two children with her second husband and had a daughter via surrogate with her third husband, "The Shield" and "Sons of Anarchy" creator Kurt Sutter, whom she wed in 2004. She currently stars on CBS's "Superior Donuts."

Shane Harper stars as Robbie Gould, a waiter at the resort where the Housemans are vacationing. In the original "Dirty Dancing," he dated Lisa but knocked up Penny and was played by the late Max Cantor. It's unclear what his role will be in the remake.

Shane Harper launched his television career in 2006 as a dancer. He then transitioned into dance-free acting roles, appearing on "Good Luck Charlie," "Awkward" and "Happyland." He also appeared in "God's Not Dead," portrayed a Disciple on the live televised production of "The Passion" and released a 2011 studio album, as well as two EPs. He and "Good Luck Charlie" co-star Bridgit Mendler dated for four years until 2015.

Casper Smart portrays Johnny's cousin and co-worker, Billy Kotsecki, who was played by Neal Jones in the original "Dirty Dancing."

Casper Smart made his television debut back in 2008 dancing on "Ellen's Even Bigger Really Big Show." Since then, he's appeared on "How I Met Your Mother," "Glee," "The Big Bang Theory" and "Shades of Blue." He's also popped up in "Step Up 3D," "Honey 2," "Leave It on the Floor" and "The Perfect Match." But, of course, he's most famous for his relationship with Jennifer Lopez. They started dating back in 2011 while he was serving as a back-up dancer on her tour and were off and on until the summer of 2016 when they finally split for good.

Billy Dee Williams has been acting since the '50s. In 1972, he scored an Emmy nomination for his performance on the made-for-TV movie "Brian's Song." But it wasn't until 1980, when he starred as Lando Calrissian in "Star Wars: Episode V – The Empire Strikes Back," that he truly stepped into the spotlight. He returned to the role in 1983's "Return of the Jedi" and then appeared in countless films, including the 1989 "Batman" movie and "Undercover Brother." In recent years, he's worked predominantly as a voice actor, though he's also popped up on "NCIS," "Glee," "Modern Family," on which he portrayed a version of himself, and "General Hospital." He's been married three times and has two children.

Tony Roberts portrays Max Kellerman, the owner of the resort where the Housemans are vacationing. The late Jack Weston played him in the original "Dirty Dancing."

Tony Roberts has been acting since the '60s. He's appeared in "Serpico," "The Taking of Pelham One Two Three" and "Annie Hall," though he hasn't worked as regularly since the end of the '90s. The Broadway star has reportedly been married once and had one child.

Trevor Einhorn (pictured with "Dirty Dancing" co-star Nicole Scherzinger) made his feature film debut in 1994's "Disclosure." He appeared in "BASEketball" and had stints on "Frasier," "Joan of Arcadia," "Sons & Daughters," "Mad Men," and, most recently, "The Magicians." Trevor asked his longtime love, dancer Alyx Andrushuk, to be his wife in February 2017.

J. Quinton Johnson will star in the "Dirty Dancing" remake as Marco, a musician in the band at the resort where the Housemans are vacationing. Marco is an all-new character who will share scenes with Sarah Hyland's Lisa.

J. Quinton Johnson made his acting debut in 2016's "Everybody Wants Some!!" He currently stars on AMC's "The Son." The newcomer, who has a girlfriend, joined the cast of Broadway's "Hamilton" in early 2017. 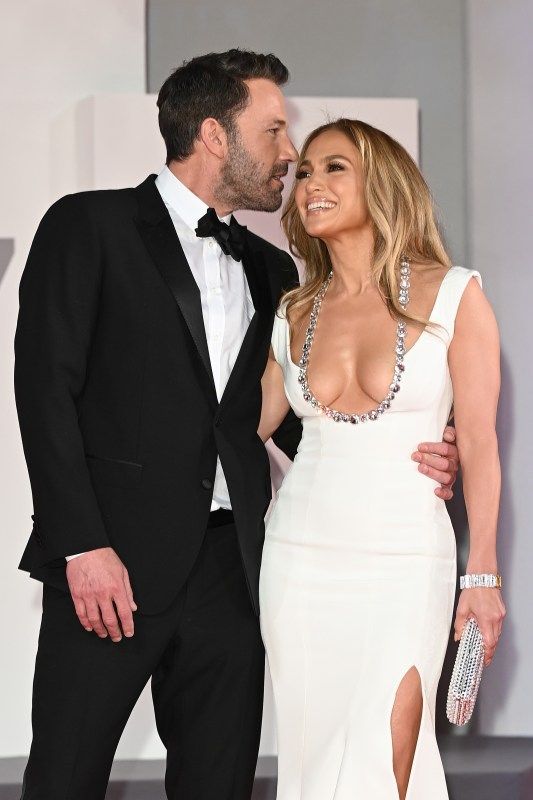