Chances are, even if you don't know the name Ryan Murphy, you've enjoyed his hit TV shows and movies over the years. The multitalented Emmy-winning writer, producer and director is the creative force behind several popular films (like "Eat Pray Love" and "Running with Scissors") as well as numerous award-winning TV shows (like the creepy primetime series "American Horror Story"). And 2018 looks to be his biggest year yet, as he's debuting several new shows including the first responders drama "9-1-1," which premieres on FOX on Jan. 3. Even more, the innovator of entertainment is also committed to diversity and inclusion of minority voices, requiring that at least half the shows he produces be directed by women, LGBTQ members or people of color. In honor of Ryan's new projects, Wonderwall.com is ranking his past television programs from good to greatest. Keep reading to see where shows like "Glee," "Scream Queens" and more landed on our list…

In 2016, "American Horror Story: Roanoke" debuted, marking the sixth season of the long-running dramatic thriller series. Starring Lady Gaga as the murderous, ancient witch Scáthach, the show focused on a couple that moves into an old plantation home in North Carolina that has a dark and deadly history. Interestingly, Ryan Murphy and series co-creator and frequent collaborator Brad Falchuk incorporated elements from the previous five seasons to make "Roanoke" the first "AHS" complete universe.

One of the first TV shows Ryan Murphy created was the high school dramedy "Popular" starring Leslie Bibb, Carly Pope (both pictured), Sara Rue, Tammy Lynn Michaels and more. The show, which was about two frenemies who are forced to unite when their parents get engaged, ran for two seasons from 1999 to 2001. Ryan served as its head writer, produced the show and directed two episodes.

RELATED: Leslie Bibb and other significant others of 2018 Golden Globe nominees

The reality audition series "The Glee Project" capitalized on the immense popularity of "Glee." Running for two seasons from 2011 to 2012, the show featured gifted actors and singers who competed each week for a guaranteed seven-episode story arc on "Glee." Ryan Murphy served as the producer of the series and also appeared on-screen. The show produced three winners in total: Samuel Larsen, Damian McGinty Jr. and Blake Jenner.

The romantic comedy series "The New Normal" starring Ellen Barkin, Justin Bartha, Bebe Wood, Georgia King, Andrew Rannells and NeNe Leakes only aired for one season, but it was fun while it lasted. The series, which debuted in 2012, focused on a rich and successful gay couple that hires a woman to be their surrogate plus all the inter-family chaos that ensues when she accepts their offer. Ryan Murphy created the series and served as a writer and producer. He also directed four episodes.

"American Horror Story: Coven" was the third season of the "AHS" anthology series. It debuted in 2013. The dramatic thriller starred Jessica Lange as well as series regulars like Evan Peters, Sarah Paulson, Kathy Bates and Angela Bassett in a haunting story about a coven of witches in New Orleans that battles dark forces (and each other) to gain power in the supernatural world. As with all the "AHS" seasons, co-creator Ryan Murphy served as one of the show's writers and executive producers.

The exciting (and visually startling) medical drama "Nip/Tuck" starring Dylan Walsh and Julian McMahon as plastic surgeons was a deceptively dark series about sex, physical transformation and the human spirit. Also starring Joely Richardson, the award-winning show ran from 2003 to 2010 and finally went off the air after its 100th episode. Ryan Murphy created the series and also worked as a writer, producer and director on the FX drama.

"American Horror Story: Asylum," which was on in 2012 and 2013, was the second installment of the popular horror series franchise. Starring Evan Peters and Sarah Paulson, the terrifying show revolved around the patients committed to an insane asylum and the equally scary staff who used exorcism, torture and scientific experimentation as methods of "treatment." Ryan Murphy co-created the series and served as a writer and executive producer.

Featuring an impressive cast of characters played by stars including Lady Gaga, Wes Bentley, Chloe Sevigny, Angela Bassett and more, "American Horror Story: Hotel" was a sensationally dark and twisty series from Ryan Murphy that aired in 2015 and 2016. This fifth season of the "AHS" franchise took viewers into fictional Hotel Cortez in Los Angeles where vampires feasted on the blood of innocent children and guests who died remained trapped inside the hotel's walls for eternity.

Horror took a political twist with "American Horror Story: Cult" — the seventh season of the frightening series from Ryan Murphy. Starring Adina Porter, Evan Peters, Sarah Paulson, Emma Roberts and more, the show took place right after the 2016 presidential election when the country was divided over the outcome. Things escalate when a cult of demented clowns begins terrorizing citizens.

When it comes to "American Horror Story," it's hard to beat the original. "AHS: Murder House" debuted in 2011 and starred Dylan McDermott, Denis O'Hare, Connie Britton, Evan Peters, Taissa Farmiga and more in a story about a family that moves into a restored mansion with a terrible, murderous history. Ryan Murphy co-created the series with Brad Falchuk and directed the pilot episode. He also served as a writer and executive producer on the show.

In 2016, Ryan Murphy debuted the biographical drama "American Crime Story," which retells some of the most famous crimes in American history. The first anthology series, "The People vs. O.J. Simpson," starred several actors from the "American Horror Story" franchise including Sarah Paulson, Connie Britton and Cuba Gooding Jr. in a tale that recounted the grisly murders of Nicole Brown Simpson and Ron Goldman and the infamous trial of the former football star accused of their brutal slayings. 2018 brings the premiere of Season 2 of the series, "The Assassination of Gianni Versace" starring Penelope Cruz, Ricky Martin and Edgar Ramirez.

In 2009, Ryan Murphy (along with pals Brad Falchuk and Ian Brennan) brought us "Glee" — one of the most popular musical TV shows ever to grace the small screen. The award-winning series, which starred Jane Lynch, Matthew Morrison, Chris Colfer, Lea Michele, Naya Rivera, the late Cory Monteith and more, featured a fictional high school glee club that competed for choir glory while also tackling important teen issues like mental illness, sexuality, race and relationships. The show, which aired its final episode in 2015, also had some big musical hits that led to album sales of 11 million.

Of all Ryan Murphy's "American Horror Story" franchises, the one that scared the living daylights out of us the most (while leaving us thoroughly entertained) was no doubt "AHS: Freak Show." This installment, which ran during the 2014-2015 TV season, featured a terrifying cast of characters that included John Carroll Lynch as Twisty the Clown (seen here), Wes Bentley as Edward Mordrake and Sarah Paulson as conjoined twins Bette and Dot Tattler in a saga about a troupe of freaks and murderers and their struggles for fame, vengeance and love.

Our No. 1 spot went to the 2017 biographical drama "Feud: Bette and Joan," a series about the infamous vendetta between Hollywood stars Bette Davis (played by Susan Sarandon) and Joan Crawford (played by Jessica Lange). The eight-episode series explored the intriguing history of these two legendary actresses who, despite working together on the hit film "What Ever Happened to Baby Jane?," hated one another. Ryan Murphy claimed the idea for the series came from his lifelong obsession with the Academy Awards — a ceremony that Joan attempted to sabotage when she learned Bette was the only one nominated for an Oscar for their movie. In 2018, Season 2 of "Feud" will premiere. This time, it will focus on Prince Charles and Princess Diana from their divorce through her tragic death. 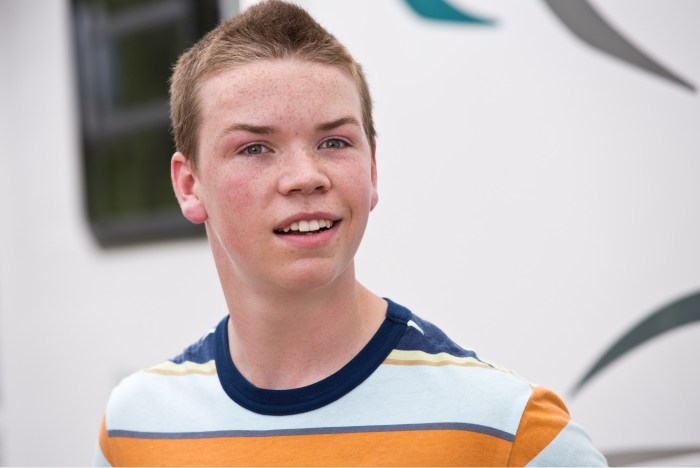