The cult musical-comedy series "Flight of the Conchords" aired on HBO for two seasons between 2007 and 2009. In honor of the 10th anniversary of the series finale on March 22, 2019, Wonderwall.com is taking a look back at some our favorite musical TV shows ever, starting with "Conchords." The series — which featured countless ridiculous, original ditties — centered around the titular musical duo (Jemaine Clement and Bret McKenzie) from New Zealand and their attempts to make it in New York City. The show earned 10 Emmy nominations in its two seasons and won fans around the globe. Jemaine and Bret still occasionally tour as the Conchords. Now keep reading for more…

"Crazy Ex-Girlfriend" debuted on The CW in October 2015 and was an immediate hit. Rachel Bloom stars on the musical-comedy, which she also created, as Rebecca Bunch, a troubled lawyer who processes her emotions by imagining elaborate musical sequences. The series has been nominated for multiple Emmys and scored Rachel a Golden Globe.

"The Partridge Family," which centered around the titular clan and their adventures as a traveling band, aired on ABC from 1970 to 1974. Shirley Jones starred as the widowed matriarch of the family, while David Cassidy and Danny Bonaduce portrayed two of her gifted offspring. A real band based on the show, which earned several Golden Globe nominations back in the day, released eight studio albums and several singles, including the 1970 hit "I Think I Love You." (David sang lead vocals and Shirley provided background vocals for the real band, but most of their co-stars did not perform with the group.)

"Glee," which centered around the misfit members of a high school glee club, aired on FOX from 2009 to 2015. The show made stars of Lea Michele, Naya Rivera, Dianna Agron, Darren Criss and several more members of the cast and often featured major celebrities — from Gwyneth Paltrow and Kate Hudson to Britney Spears and Idina Menzel — in guest-starring roles. It won the Golden Globe for best comedy or musical TV series twice and racked up countless Emmy nominations over the course of its six seasons on the air.

"Victorious" was the musical TV comedy that gave singing sensation Ariana Grande her big break. The Nickelodeon series was about an aspiring teen singer (portrayed by Victoria Justice) who attends a performing arts high school in Hollywood. "Victorious" only aired for four seasons but had a huge following, leading to a spinoff — "Sam & Cat" — with Ariana's character, Cat Valentine.

All the '80s babies should remember this one! "Jem" was one of the biggest musical shows of the decade. The Hasbro animated program followed Jerrica Benton aka Jem, a music company owner who moonlighted as a superstar pop singer with her band, The Holograms. "Jem" was the No. 1 syndicated cartoon series in 1986 and spawned an entire franchise of dolls, comics, music and a 2015 live-action remake, "Jen and the Holograms."

"Empire," which debuted in early 2015, has run for five seasons on FOX and completed shooting for its sixth in early 2019. The drama centers around the founding family of a hip-hop music label and each episode features new, original music. The series has racked up Emmy nominations — including a best lead actress nod for star Taraji P. Henson — over its run. She also won the Golden Globe for best actress in a drama series in 2016 for her performance as Empire Entertainment matriarch Cookie Lyon.

FOX's "Star," which exists within the "Empire" universe, debuted in late 2016 and aired its third season in 2018. The drama centers around the titular singer (Jude Demorest), who forms the girl group Big Trouble after leaving foster care. Like "Empire," the series features new, original tunes.

Hayden Panettiere and Connie Britton starred as rival country singers on the musical drama "Nashville," which debuted in 2012 and has had quite the bumpy road over the course of its six seasons. For starters, the series moved from ABC to CMT following the conclusion of the fourth season, and then Connie, who earned Emmy and Golden Globe nominations in 2013 for her work on the show, left midway through Season 5. "Nashville" ended its run at the end of Season 6 in 2018.

An eponymous TV show based on the 1980 movie "Fame" aired on NBC and then in syndication from 1982 to 1987. The musical drama chronicled the lives of aspiring performance artists (singers, dancers, actors, etc.) and their teachers at the fictional New York City High School for the Performing Arts. The show racked up awards during its six seasons on TV, including two Emmys for star Debbie Allen and two Golden Globes for best comedy or musical series.

"Smash" aired on NBC for just two seasons between 2012 and 2013. The musical drama centered around the creation of a new Broadway musical based on the life of Marilyn Monroe and starred Anjelica Huston, Katharine McPhee, Megan Hilty and Debra Messing. "Smash" scored a Golden Globe nomination for best comedy or musical TV series in 2013 and Joshua Bergasse won an Emmy in 2012 for his choreography on the show.

The brilliant but short-lived musical comedy "Galavant" aired for two seasons on ABC between 2015 and 2016. Legendary composer Alan Menken served as an executive producer on the show, which centered around a washed-up knight's attempts to save his kingdom from the allegedly evil (but mostly clueless) king who stole his true love. Joshua Sasse and Timothy Omundson were among the stars of the series, which earned an Emmy nomination in 2016 for outstanding original music and lyrics.

Miley Cyrus starred as an average high school girl who secretly moonlights as the titular pop star on "Hannah Montana," which aired on the Disney Channel for four seasons between 2006 and 2011. Walt Disney Records released five albums of music from the show — which earned four Emmy nominations in the outstanding children's program category — and a 2009 movie based on the series, as well as one live album, two remix albums and a compilation album.

The well-reviewed, Baz Luhrmann-created musical-drama "The Get Down" aired on Netflix for just one season of 11 episodes. The series, which featured Jaden Smith (pictured) in a supporting role, centered around aspiring musicians during the dawn of hip hop in 1970s New York City. The soundtrack featured a combination of new, original tunes and classic tracks reimagined by modern artists. RIP, "The Get Down."

"Rags to Riches" was one of the most celebrated musical shows of the 1980s, though it was short-lived. The 1987 series was about a self-made millionaire (played by Joseph Bologna, pictured) who adopts five orphan girls (played by Kimiko Gelman, Bridget Michele, Tisha Campbell, Blanca De Garr and Heidi Zeigler). While critics loved "Riches," audiences didn't necessarily agree and the show was cancelled during Season 2 due to low ratings.

"Treme" was a New Orleans-based show that examined the city's unique culture and attempts to rebuild in the aftermath of Hurricane Katrina. The HBO drama, which starred John Goodman, Wendell Pierce, Kim Dickens and Khandi Alexander, featured musical performances from not only the cast but also many NOLA-based musical artists. "Treme" first aired in 2010 and lasted for four seasons.

We know all the millennials remember this show. The '90s pop group S Club 7 debuted their own show, "S Club 7 in Miami," in 1999 on ABC Family. The musical series was super-successful and spawned three follow-up shows: "S Club 7 in L.A.," "S Club 7 in Hollywood" and "S Club 7 in Barcelona." All good things must come to end, however, and the S Club series ended when the group disbanded in 2003.

"Blackpool" brought British audiences some of its best musical television in the early 2000s. Known as "Viva Blackpool" in the States, "Blackpool" centered on the murder of a young man in an arcade in the seaside resort town of Blackpool, England. The BBC show, which starred "The Walking Dead" actor David Morrissey, was well-received by critics and fans, earning one BAFTA and one Golden Globe nomination.

"Big Time Rush" was a musical comedy show that told the story of four hockey players from Minnesota — Kendall Schmidt (as Kendall Knight), James Maslow (as James Diamond), Logan Henderson (as Logan Mitchell) and Carlos Pena (as Carlos Garcia) — after they're selected by a fictional mega-producer to form a boy band. The Nickelodeon series debuted with a sneak peek in 2009 and, when it officially premiered in 2010, was watched by 6.8 million total viewers, making it Nick's highest rated live-action series debut ever. "Big Time" ran for four seasons before wrapping in 2013.

Nickelodeon definitely has a thing for musical TV shows! "The Naked Brothers Band" was a musical series that depicted the daily lives of creator Polly Draper's sons, who led a fictional world-renowned rock band. The show debuted in 2007 and the premiere was Nick's highest rated in seven years, according to Viacom. The series went on to have two more seasons before wrapping in 2009.

"Schoolhouse Rock!" was one of the first musical TV shows ever. The animated educational program debuted in 1973 and used songs to teach children about history, government, math and grammar (conjunction junction, anyone?). After premiering in the 1970s, "Schoolhouse Rock!" continued to produce episodes until 2009, when the series finally wrapped.

"Eli Stone" combined musical scenes, comedy and legal drama to make one interesting television series. The ABC show, which premiered in 2008, told the story of Eli Stone, a San Francisco lawyer who begins to have hallucinations (such as a George Michael soundtrack that only he can hear). The series — which starred Jonny Lee Miller as Eli — received rave reviews from critics and audiences but was canceled after its second season in 2009.

NBC tried its hand at musical drama when "Rise" debuted in 2018. The show told the story of real-life teacher Lou Volpe and how he transformed a famed theater program at a Pennsylvania high school. "Rise" starred "How I Met Your Mother" alum Josh Radnor, "Moana" actress Auli'i Cravalho, newcomer Damon J. Gillespie, "White Men Can't Jump" actress Rosie Perez and more. Sadly, the show only lasted for one season before execs pulled the plug in May 2018. 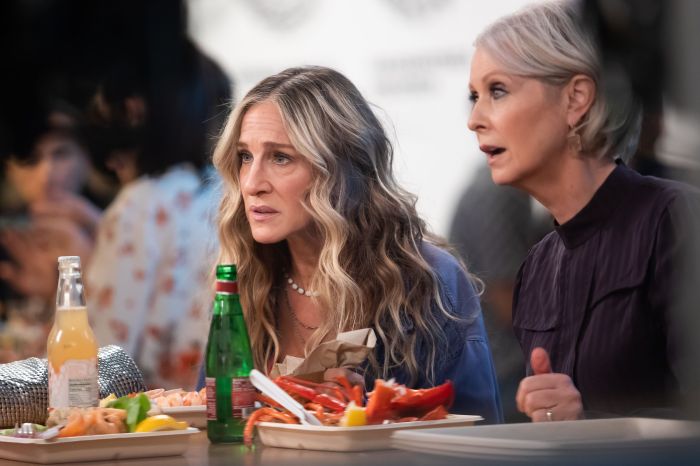