Kate Mara and Jamie Bell are soon going to become the Fantastic Three. On Jan. 9, Page Six reported that the "Fantastic Four" co-stars are expecting a child. Kate was overheard telling people she was pregnant at the 2019 Golden Globes. It's believed that she's five months along. It will be the first little one for the couple and Jamie's second: He has a 5-year-old son with ex-wife Evan Rachel Wood.

The fallout from Lifetime's "Surviving R. Kelly" has caught the attention of authorities in Georgia: The R&B star is now the subject of a criminal investigation. The Blast reported that an investigation is being conducted into his alleged sexual misconduct with young girls, something that was explored in the scathing six-part documentary. The Lifetime show also looked into claims that the music star has held women as sex slaves. The Fulton County District Attorney has been actively investigating R. Kelly and a Johns Creek, Georgia, mansion where he previously lived, according to multiple media outlets. One woman has given an account of her experience in the singer's house. Another woman — an alleged sex slave — has reportedly been contacted by prosecutors and ordered to come in for questioning. R. Kelly could be charged with false imprisonment if prosecutors believe he's held women against their will.

What, exactly, did Chrissy Metz say about Alison Brie? That was one of the hot topics at the Golden Globes on Jan. 6. The "This Is Us" actress seemed to be caught calling the "GLOW" star a "bi—" on a hot mic after a red carpet interview on the Golden Globes Facebook Live pre-show. Video shows Chrissy being asked if she knows Alison, who was on the other side of the carpet. The camera then panned to Alison with Chrissy's audio still live. "She's such a bi—," many thought they heard Chrissy say. Later in the night, Chrissy took to Twitter to insist the story was false, writing, "It's terribly unfortunate anyone would think much less run a story that was completely fabricated! I adore Alison and would never say a bad word about her, or anyone! I sure hope she knows my heart." Pre-show host AJ Gibson later came to Chrissy's defense, telling Page Six in an email, "I was standing on stage with Chrissy and thought she called Alison a babe." Alison also responded via Instagram. "Nothing but love for @chrissymetz!!" she wrote along with a photo of herself and the NBC actress. "Rumors can't keep us down!"

Rosario Dawson might have a new beau, and he could be the leader of the free world one day. That's not hyperbole either. The actress has been romantically linked to New Jersey Senator Cory Booker, a Democrat who's reportedly mulling a presidential run. Page Six reported that two days after they saw a movie together, Rosario and the politician attended a Jan. 5 performance of the Broadway hit "Dear Evan Hansen" with her daughter and his niece and hung out backstage (they're pictured here with "Dean Evan Hansen" actor Taylor Trensch). "They were so cute together and seemed so flirtatious," said a source, noting that though there was no PDA, they appeared to be a couple. People magazine reported that the actress playfully sang, "I love you, te amo," to the politician too during a cast meet-and-greet.

"Seinfeld" star Jerry Stiller was hospitalized in New York City on Jan. 10 after suffering from a medical "episode." While one report said he showed stroke-like symptoms, a source close to the TV star shot down that rumor. "He had some sort of episode and they wanted to be cautious," the source told the New York Post. "There's no evidence of a stroke." Jerry, the father of actor Ben Stiller, is now stable and recovering.

Kevin Spacey appeared at a Massachusetts courthouse on Jan. 7 and pleaded not guilty to charges that he groped an 18 year old at a bar in 2016. It's one of the first times the once-celebrated actor has appeared in public since he was accused of sexual assault and harassment by others in late 2017. According to the criminal complaint pertaining to the Massachusetts case, the teen said he lied about his age to the actor while at a bar (he told Kevin he was 23). After that, Kevin allegedly bought the teen drinks and then groped him, the complaint explains. Kevin's next court appearance is scheduled for March 4. He was arraigned on a charge of indecent assault and battery, which is a felony. If convicted, he faces up to five years in prison. On Jan. 8, Kevin's team argued that the teen was the pursuer and was flirting with Kevin.

The most talked-about person at the Golden Globes wasn't someone who won. Heck, it wasn't even someone who attended the awards telecast, but rather someone on the red carpet. A brunette dubbed the Fiji Water Girl stole the show as she photobombed tons of celebrities — including "Bodyguard" star (and new Globe winner) Richard Madden — on the red carpet. Twitter was set ablaze by the woman, later identified as model Kelleth Cuthbert. However, not everyone was a fan. On Jan. 8, Jamie Lee Curtis blasted Fiji for the marketing ploy. "I specifically moved away from the blatant promotions by Fiji and Moet where young women with their trays filled with their wares stood near a designated camera," Jamie explained on social media. "I knew why there was a photographer poised there and I moved away as I said out loud that I didn't want to be doing advertising for either. Clearly this angle shows that I moved from her being behind me and yet from the side it still happens. The sponsors of events need to get permission from people when they get them to take their picture next to products." Who's thirsty?

Jake Gyllenhaal is all smiles when it comes to his new romance with French model Jeanne Cadieu. Jake, 38, and Jeanne, 22, were spotted having dinner at New York City's Sweetgreen restaurant on Jan. 7, and a source told Page Six that Jake was "super smiley, like, so happy." The two tried to stay low-key, but the staff knew exactly who they were dealing with. "[Jake] wasn't making eye contact with anyone but his girlfriend and the people behind the [Sweetgreen] counter. No one bothered him," a source told Page Six, adding that the staff "freaked out once he left and then people on the street were talking about it."

Melissa McCarthy opened up about being the victim of an awful body shaming moment years ago while doing press for "Bridesmaids." "I won't mention names but … he kept asking, 'Are you shocked that you actually work in this business at your tremendous size?'" she told InStyle this week. "He was like, 'Oh, your tremendous size, you can actually work?' I just remember all the blood drained out of me. I thought, 'With my tremendous size, I could tackle you so quickly.'" The reporter, she said, lost his job. "He went back to that question three or four times, and I just kept talking about the script or how fun [director] Paul Feig was," she said. "It happens all the time, to the point where it's fascinating because they don't do it to men. Not to be a jerk or single him out, but when John Goodman was heavier, did anybody ever talk about his girth?" Another time, a reporter called her "grotesque." "I was like, 'OK, so have you ever asked this of a guy? I'm playing a character. You need to get out more if you don't think there are real women like that," she recalled.

There's another Duggar baby about to enter the world (rinse, repeat). On Jan. 9, Jessa Duggar Seewald and Ben Seewald announced that they're expecting their third child. "We are overjoyed that God has blessed us with a baby, due late this Spring!" Jessa said in a statement. "From the day we found out we were expecting, we both guessed boy, and if our predictions are right then we already have a ton the clothing and accessories ready to pass down! At the same time, we would absolutely love it if we found out we were having a girl — though we've joked that we'd be starting from square one and might have to learn a few things." Jessa, 26, and Ben, 23, are already parents to two boys, Spurgeon Elliot, 3, and Henry Wilberforce, 23 months. 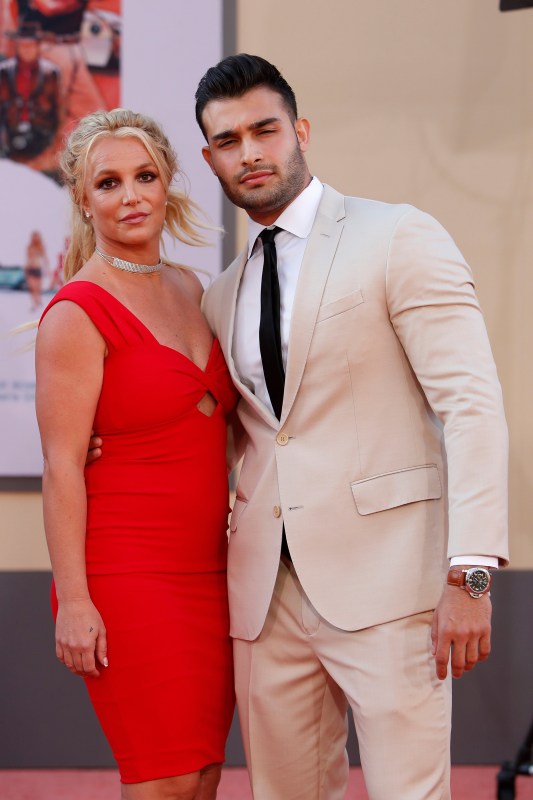 Up Next Defending Britney