On April 7, the 2019 Academy of Country Music Awards will air live from Las Vegas. In honor of this year's show, Wonderwall.com is taking a look back at some of the best red carpet fashion moments from the 2009 ACM Awards… starting with Taylor Swift's dramatic crimson gown from designer Angel Sanchez. Taylor, who took home the prize for best album that night, also took our breath away in this sleeveless one-shouldered gown with a flared skirt and enveloping neckline that rose like flames around her décolletage. Keep reading to see more great ACM Awards red carpet looks from a decade ago…

He might not be a country music star, but actor Matthew McConaughey is all country at heart. This native Texan brought his then-girlfriend (now-wife) Camila Alves to the the 2009 ACM Awards in total style. While Matt kept his look cowboy cool in a rich chocolate leather jacket paired with an open white button-up shirt, light denim and leather boots, Camila was all legs in this low-cut white mini with a playfully accentuated high collar and sexy matching heels.

Carrie Underwood invoked a Grecian goddess at the 2009 ACM Awards. Donning this baby pink toga-style Randi Rahm gown, the singer and former "American Idol" winner — who was nominated that night for best album — looked so lovely, she could have easily launch a thousand ships à la Helen of Troy.

Another Hollywood celebrity who turned up at the 2009 ACM Awards was actress Nicole Kidman. Supporting husband Keith Urban — who was nominated for best male vocalist — Nicole brought the drama in this black sequined gown from designer L'Wren Scott. The high-neck, long-sleeved gown featured a playful open back, which caused everyone to do a double-take to admire Nicole's stunning style.

A 16-year-old Miley Cyrus hit up the 2009 ACM Awards in this slate gray bejeweled Monique Lhuillier gown. The "Hannah Montana" star's rather simple one-shouldered gown with a knee-high slit gave no indication of the edgy looks she would come to favor in later years.

Miranda Lambert, who was nominated for best single record, took a page from Taylor Swift's book and wore red to the 2009 ACM Awards. Her silver-embroidered strapless babydoll dress showed off her killer upper bod and slender legs, which she accentuated with silver peep-toe heels.

We love when couples color coordinate on the red carpet! Luke Bryan amplified his otherwise simple pinstriped suit with a pink tie to match wife Caroline's gorgeous metallic pink Grecian-style gown at the 2009 ACM Awards. We especially love that Caroline kept her jewelry to a minimum, allowing her gown's delicate rhinestone embellishments to do all the sparkling.

"Dancing With the Stars" pro-turned-country music singer Julianne Hough glimmered at the 2009 ACM Awards. In a gorgeously beaded gold-and-silver gown from Zuhair Murad, Julianne won the trophy for best new female vocalist that night but accidentally ripped her dress on the way up the stairs to receive it! Proving she's a total pro, the singer quipped to the audience during her acceptance speech, "It's a good thing my dress ripped. Now I have something else to think about."

Olympic gold medalist Caitlyn Jenner (who was then known as Bruce) and then-wife Kris Jenner made an appearance at the 2009 ACM Awards. Caitlyn's black suit was a classic look, giving Kris the chance to shine in her strapless metallic purple gown.

Nominees for best album and best vocal due, singers Eddie Montgomery and the late Troy Gentry of the group Montgomery Gentry brought some serious style to the 2009 ACM Awards. Eddie proved himself a pro at mixing textures and colors in his stone patent-leather jacket with dark denim, red leather boots and a black bolero hat. Troy, who passed away in a helicopter crash in 2017, opted for a more disco-cowboy look in a silver sports coat and slacks paired with matching boots and a simple black V-neck tee.

It looks like "The Big Bang Theory" star Kaley Cuoco, who served as a presenter that night, missed the fashion memo at the 2009 ACM Awards. While flowing gowns and shimmery metallics were a hit on the red carpet, Kaley arrived in this jarring sleeveless mini with bold contrasting colors featuring an eye-straining chevron print. Thankfully, Kaley toned down the look by accessorizing it with neutral platform pumps and minimal jewelry.

Kristian Bush and Jennifer Nettles of Sugarland hit all the right fashion notes at the 2009 ACM Awards. Sticking with a gray color palette, Kristian made his red-trimmed suit a little more playful by pairing it with an open-collared black button-up and a fedora with a checkered hat band. Jennifer's sleeveless mermaid gown was a sexy complement that she perfectly accessorized with chunky diamond cuff bracelets. The pair won the award for best vocal duo that night while Jennifer also took home the Crystal Milestone award.

It's only fitting that country music queen Reba McEntire wore a royal color to the 2009 ACM Awards. Wearing this flowing purple and lilac A-line gown, Reba — who was nominated that night for best vocal event — proved that after 30 years in the industry, she can still rule on the red carpet.

Big & Rich's John Rich struck just the right chord with this classic-meets-country look at the 2009 ACM Awards. Pairing a fitted pinstripe vest and blue sports coat with distressed denim and his favorite black cowboy hat, John — who was nominated along with bandmate Big Kenny for best vocal duo — was dressed to impress on the red carpet.

We love everything about Martina McBride's style at the 2009 ACM Awards. Her flowing, single-shoulder white empire-waist gown featured a playful pop of turquoise that made her blue eyes sparkle. Keeping her wavy locks long and loose, Martina was an entire mood on the red carpet.

Jake Owen and then-girlfriend Lauren Blair Grissom brought their fashion A-game to the 2009 ACM Awards. Lauren kept her look sexy in a sequined black mini with a sheer black organza ruffle at the hemline. Jake, who took home the award for best new male vocalist that night, was dapper in a pale gray pinstriped suit accessorized with silver shades.

Kellie Pickler transformed into a sequined siren at the 2009 ACM Awards. Donning this glitzy gold mermaid gown from designer Zuhair Murad, Kellie seemed to radiate her own spotlight. The "Best Days of Your Life" singer upped the sparkle quotient by pairing the dress with a quartz-studded clutch from Daniel Swarovski, earrings from Tito Pedrini and a giant citrine ring from Lucifer vir Honestus.

Actress Jennifer Love Hewitt also made an appearance at the 2009 ACM Awards. The "Ghost Whisperer" star arrived with her boyfriend at the time, actor and comedian Jamie Kennedy, wearing this gorgeous full-length halter-style gown from Robert Rodriguez.

Is it just us or did honky tonk legend Alan Jackson and wife Denise look ready for a hot date at the 2009 ACM Awards? Wearing an embroidered sports coat with faded denim and his trademark white cowboy hat, Alan looked like he was about to whisk Denise — dressed in a silvery-white embroidered cocktail dress and heels — away for a night of fine wine, great music and a candlelit meal.

Victoria's Secret Angel Marisa Miller kept it sexy at the 2009 ACM Awards in this white mermaid dress from Dolce & Gabbana. Marisa was a presenter that night, selected by singer Toby Keith to introduce him onstage.

Nominated in three categories including best song, country musician Heidi Newfield went for the gold in this Jean Fares Couture gown at the 2009 ACM Awards. Featuring a wrap-around rhinestone neckline, open panels and a playful splash of color at the train, Heidi was a vision of glamorous style on the red carpet. 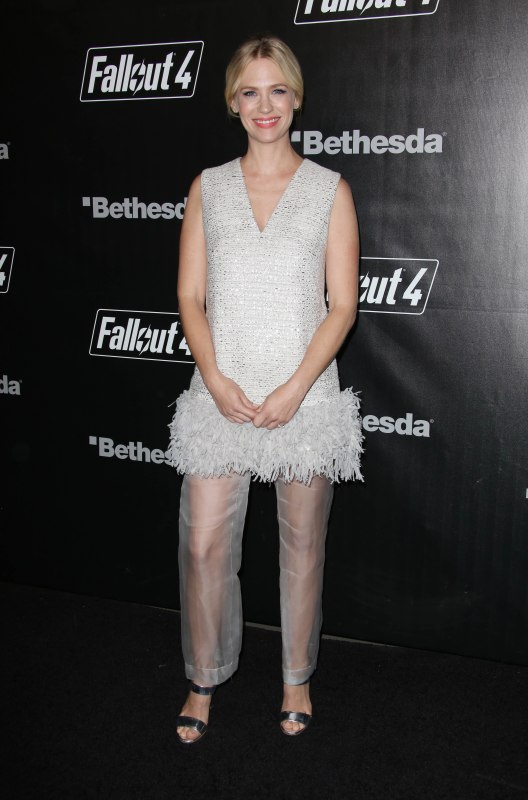