It's time to round up the MTV Movie & TV Awards fashion, sorting out the best and worst dressed stars of the night. There was both killer and questionable fashion, and Wonderwall.com is breaking it all down for you. First up? "Truth Hurts," Lizzo! Though her tunes are featured prominently on our summer playlist, we can't cosign this getup. From the neon green shade to that feather-trimmed neckline to the way she paired it with chunky white sneakers, the ensemble certainly turn heads but wasn't our favorite of the night. But before we move on, we've got to get a better look at those sneakers. Keep reading to check them out and see the rest of the best and worst dressed stars…

RELATED: Celebs out and about: The MTV Movie & TV Awards edition

If not for that wild outfit, Lizzo's sneakers nearly could have scored a fashion hit on their own! Just check out these killer shoes, covered with gemstones for a super unique sporty glam vibe.

Fab in Fendi! Kieran Shipka stunned in this look from the fashion house, which featured a bold all over logo pattern topped with smatterings of neon hues. She finished the look with equally stellar multicolored Fendi heels, cementing this ensemble as one of our favorites of the night.

RELATED: Fashion hits and misses for May 2019

Where do we even start? Nick Cannon arrived in this truly puzzling getup, which started with a Louis Vuitton face mask, ended with Louis Vuitton sneakers and somewhere in the middle included a pair of cargo shorts. Also involved in this hideous outfit? What looks to be some kind of Louis Vuitton-clad vest, lots of chains and a red tank top. Next up, a closer look…

We're not sure how people even identified Nick Cannon in this face mask. Up close gives a better view of the chains, which included a shoutout to his popular MTV show, "Wild 'n Out."

Jada Pinkett Smith rocked a sparkly silver suit with black lapels and a black shirt underneath, tying it all together with black heels. And while the look wasn't awful, we just couldn't shake her strong Tin Man vibes… so this one is hitting the miss list.

We loved Aubrey Plaza's black and white minidress. The sparkly frock featured sweet white ruffles along the collar and sleeves, giving is a feminine flair. Next up, a look at her amazing shoes.

Aubrey Plaza complemented her black and white minidress with these phenomenally blinged-out sandals. Just check out the size of those gemstones!

With suit jacket-style dresses everywhere, there are bound to be some disappointments. Tessa Thompson's silver frock was one of them. We weren't into the shimmery number, and we loathed her shoe selection. Get a better view of the shoes next…

Yikes! Tessa Thompson's shoes were part loafer, part striped platform and part heel and we weren't into any part of them.

Tiffany Haddish sported this slinky silver number which featured a bow detail on one sleeve and a thigh-high slit. She paired it with an updo and similarly hued metallic pumps for a sparkly fashion hit.

Marissa Cooper would be so disappointed! Mischa Barton arrived in this dull all black number, which featured billowy sheer sleeves and subtle gold studding on the fabric. Though we were underwhelmed by the dress, we did like her earrings! See them next…

When it came time to pick jewelry for this dreary dress, Mischa Barton stepped it up a notch. We loved these dangly gold earrings in a tulip shape. For hair and makeup she kept things simple, rocking a middle part and a nude lip.

Mischa Barton's co-star on the upcoming "The Hills" reboot Audrina Patridge fared a little better in black. The reality star rocked this halter-style black dress with a slit up the right side bordered in a cool studded design.

Did someone tell Storm Reid this was a costume party? The star arrived in this pirate-esque getup, which appeared to be a vibrant gold jacket atop a white minidress, cinched with a navy blue belt with gold embellishments. Though the colors were great, we couldn't look at it without thinking about buried treasure.

Elisabeth Moss was armed with a dragon on the MTV Movie & TV Awards red carpet! Her black minidress featured a massive dragon design down the front, splitting the dress into black velvet and black netting for an edgy, stylish result. Tying everything together? Those black and silver pumps that completed this look flawlessly.

Nico Tortorella never fails to make the miss list on a red carpet, and the MTV Movie & TV Awards were no exception. The "Younger" star's look started out all right — a short suit in summer is a genius idea — but he lost us with those plaid shoes.

David! Our second favorite "Schitt's Creek" onscreen fashionista (after Moira Rose, obviously), Dan Levy looked sharp at the MTV Movie and TV Awards, rocking this bright red suit with a white dress shirt that had a unique chain detailing around the collar. He wrapped this five star look up with some killer black boots.

Dan Levy's onscreen sis, Annie Murphy, arrived on the MTV Movie and TV Awards and brought "a little bit Alexis" with her! The star's "Schitt's Creek" character Alexis Rose would have been so proud of this three piece getup — an iridescent suit in a pretty pale pink shade with a matching crop top.

Rounding out the "Schitt's Creek" stars? Dustin Milligan, who sported his summer best with this sharp white suit. Underneath he opted for a baby blue dress shirt and a vibrant pocket scarf, finishing off his look with bright white sneakers.

Really, Brody Jenner? That's what you picked to wear to the MTV Movie & TV Awards? The reality star's gray t-shirt, black jeans and sneakers just didn't cut it for us in the fashion department. He scored himself a giant miss with this super casual look.

Another award show, another suit jacket-style dress for JWoww! The reality star rocked a black one on this carpet and paired it with a choker necklace, hoops and statement pumps, which we'll see next!

We loved the way JWoww spiced things up in the shoe department — rocking this pair of heels covered in black and white geometric shapes.

Another guy that couldn't be bothered to dress up for the MTV Movie & TV Awards? Noah Centineo, who truly let us down in the style department by rocking this wrinkled black t-shirt, black jeans and sneakers. Yawn!

Noah Centineo's "To All The Boys I've Loved Before" co-star Lana Condor opted for a pretty little minidress, complete with puff sleeves, a low neckline and a super short skirt. We loved the unique print and the way she paired it with those gorgeous dark pumps.

You know the phrase about looking like a million bucks? Well, YouTuber Tana Mongeau hasn't. Or maybe she just misinterpreted it and decided to look like one buck. Either way, this bizarre getup looks like it's straight from the bargain bin.

It was teal, teal and more teal for MTV Movie & TV Awards host Zachary Levi! The star donned this vibrant suit with a dress shirt in a paler hue and a matching tie and completed his look with black boots.

It was a whole lot of Gucci for Colton Underwood at the MTV Movie & TV Awards… we're just not sure "The Bachelor" star could pull it all off. We would have liked this look if he completed the all-black getup with similarly hued shoes, but adding those loud white Gucci sneakers to the dark ensemble missed the mark.

Heidi Montag looked lovely at the MTV Movie & TV Awards, rocking this navy blue Gucci jumpsuit, complete with the massive logo at the waist. She added some gold heels and a matching bracelet to complement her look, which was perfectly on point for the event.

Brandon Thomas Lee rocked a cool and edgy ensemble at the MTV Movie & TV Awards. Pamela Anderson and Tommy Lee's son donned a long-sleeved black shirt with white pants with black striped detail and a chain hanging from his belt loop. He finished things off with layered necklaces and back dress shoes. 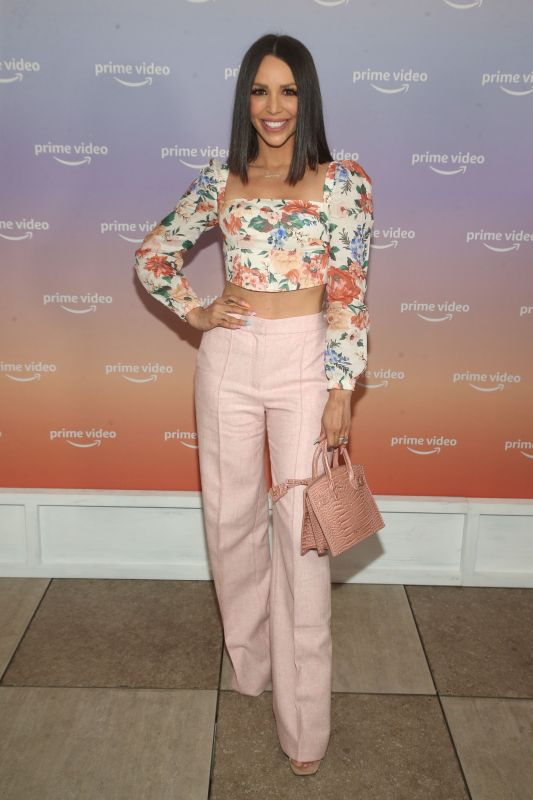