They're here! The nominations for the 2021 Grammys were announced on Nov. 20. While many of the stars who received nods quickly started sharing their joyful reactions, there were also snubs that inflamed fans and artists alike. Read what they all had to say, starting with The Weeknd. Despite widely being considered a frontrunner considering the widespread critical acclaim, popularity and chart success of his album "After Hours" and singles including "Heartless" and "Blinding Lights," The Weeknd failed to score a single Grammy nomination from the Recording Academy, which has denied reports claiming friction over his competitive performance at the 2021 Super Bowl Halftime Show was a factor. "The Grammys remain corrupt. You owe me, my fans and the industry transparency…" he tweeted. Keep reading for more 2021 Grammy nominations announcement reactions ahead of the show on Jan. 31 on CBS…

"HOTTIES WE GOT 4 GRAMMY NOMINATIONS 🔥🔥🔥🔥Hotties head to my Twitter to celebrate with me!!!!" –Megan the Stallion

"To the Grammys I am flattered to be acknowledged and appreciated for my artistry. I am very meticulous and intentional about my music. With that being said, I set out to make an R&B album. 'Changes' was and is an R&B album. It is not being acknowledged as an R&B album, which is very strange to me. I grew up admiring R&B music and wished to make a project that would embody that sound. For this not to be put into that category feels weird, considering from the chords to the melodies to the vocal style, all the way down to the hip-hop drums that were chosen, it is undeniably, unmistakably an R&B album! To be clear I absolutely love Pop music, it just wasn't what I set out to make this time around. My gratitude for feeling respected for my work remains and I am honored to be nominated either way." —Justin Bieber, who shared a photo post of this message on Instagram that he captioned, "Please don't mistake this as me being ungrateful, these are just my thoughts take em or leave em. Thank you to the people who fought for me to even have any noms."

"thank you @RecordingAcad. I'm so grateful that I get to make music with my friends. Thanks to all the bad a**** that made 'Wildcard' happen, and thank you @lukedick and @nataliehemby for this pretty song with wings. #Bluebird #Wildcard #GRAMMYs" —Miranda Lambert

"ALBUM OF THE YEAR AND BEST ROCK PERFORMANCE NOM!? and we finally know who our dad's favorite is … WE TOLD YOUUUUUUUUU!!! women DO make the best rock music CONGRATS TO ALL THE LADIESSSSSSS!!" –Haim, reacting to their nods as well as the fact that for the first time ever, every Grammy nominee in the best rock performance category is a female-led act

"Wait, what?? This should 100% be Alex [Trebek]'s Grammy nomination. He wrote the book and reads much of the audiobook! Who do I speak to about this." –Ken Jennings

"Being nominated is the best part of the Grammys. Winning or losing is inconsequential. Music is subjective, nothing is inherently better than anything else. Congratulations to every nominee this year, thank you for making music that has meant so much to me and to so many! How lucky are we" –Finneas

"thank you @RecordingAcad and congratulations to all my friends, peers & @TheHighwomen for our first nomination!" –Maren Morris

"THANK YOU SO MUCH @RecordingAcad @youasidepiece 🎯🎯🎯 🏆🏆🏆I hope they have a vaccine so I can wear a cool outfit in public again. But if not I got my mom ready to bdazzle my mask." –Diplo

"I'm so honored for the GRAMMY nominations today! Sending much love to all involved with this album and many thanks to all at the @RecordingAcad for their support!" –Brittany Howard

"ask us how our days been" —Taylor Swift, who posted a photo with her "folklore" album collaborators on her computer screen celebrating her six 2021 Grammy nods

"I just woke up what" –Phoebe Bridgers

"Our first nomination! Thank you so much to the @RecordingAcad #GRAMMYs" –The Highwomen

"IM A GRAMMY NOMINATED ARTIST!!! I'm in a puddle of tears in bed after being woken up and told IM NOMINATED AS BEST NEW ARTIST. my mom at the beginning of the year wrote in her intentions book for me to be nominated for a grammy… mom you've always been and are my biggest fan. thank u i love you so much. thank you to my team and my cyrens. thank you to everyone that took part in the making of The End of Everything EP. thank you PJ for always being there for me and making me feel like my best self as a person and artist. thank you beyond measures to the recording academy for listening and truly hearing my music. this is such an honor and i am in utter shock. thank you so much from the bottom of my heart i truly can't believe it my mind is going a thousand miles a minute and i am beyond grateful and full of love and gratitude. i know my grandma is looking down on me and this is from her. thank you mammie i wish you could be here for this." –Noah Cyrus

"Congratulations @noahcyrus on your #Grammy nomination!!!!!!! You deserve it! Soooooo happy and proud of you! Be a jack hammer!!!!!!" –Billy Ray Cyrus

"Thank you @RecordingAcad for the two 2021 GRAMMYs nominations for Everyday Life. – Album Of The Year – Best Recording Package" –Coldplay

"JAYSUS WE'VE BEEN NOMINATED FOR A GRAMMY FOR BEST ROCK ALBUM WITH A HERO'S DEATH" –Fontaines D.C.

"#somepeopledo has been an emotional roller coaster since the moment we started writing it. It's more vulnerable than anything we've ever done, which actually intimidated us when we released it. It's rewarding to be recognized by the @RecordingAcad for putting ourselves out there." –Old Dominion

"Omg we're crying. Three grammy nominations???? we are so thankful to you all for listening to #ungodlyhour and receiving it with so much love." –Chloe x Halle

"There aren't enough words to describe what these nominations mean to us. Beyond grateful and completely blown away. @RecordingAcad #GRAMMYs" –Little Big Town

"Delighted for the @RecordingAcad Nom for 'Beautiful Ghosts'. Loved working with the brilliant @taylorswift13. Congratulations on your others!" –Andrew Lloyd Webber

"THIS. CANNOT. BE. REAL. 3 GRAMMY NOMINATIONS ARE YOU KIDDING ME RN????? IM SCREAMING THANK YOU @recordingacademy AND EVERY SINGLE ONE OF YOU. I am truly honored that the music my friends and i write is something you all can relate to. I will never forget this feeling. Thank you thank you thank you." –Ingrid Andress

"Wow! We are absolutely blown away hearing the news on 'Ocean' being nominated for Best Country Duo/Group Performance. When we went in to cut this song, we knew it was incredibly powerful and it only felt right that Hillary took the lead which took the song to a whole new level. There were times during the recording of the music video we could barely make it through. To Tofer, Abe and Sarah – thank you for trusting us with this song you so beautifully wrote. Thank you to every single person that has listened to this song and made it part of their story. Thank you so much to the @RecordingAcad for this honor and shout out to all the other great nominees up for the award!" –Lady A

"We are so honored to have been nominated for three GRAMMY awards by the @recordingacademy! We want to send a special thank you to the Puma Pack for listening to our music and supporting us over the last few years – we appreciate your support so much!" —Black Pumas

"My album All Rise has been nominated for the 63rd #GRAMMYs Award for Best R&B Album. This is a true honor and I'm so thankful to the @recordingacad" –Gregory Porter

"GUYS CAN YOU BELIEVE IT! LIKE WOW I CANT EVEN Most amazing news ever." –Julia Michaels

Trevor Noah was announced as the host of the 2021 Grammy Awards. "Despite the fact that I am extremely disappointed that the Grammys have refused to have me sing or be nominated for best pop album, I am thrilled to be hosting this auspicious event. I think as a one-time Grammy nominee, I am the best person to provide a shoulder to all the amazing artists who do not win on the night because I too know the pain of not winning the award! (This is a metaphorical shoulder, I'm not trying to catch Corona.) See you at the 63rd Grammys!" he wrote on social media.

"This could be bigger than hula hoops! Congrats to the entire cast and team of #LittleShopNYC on receiving a Grammy Nomination for Best Musical Theater Album! #Grammys" –Little Shop of Horrors 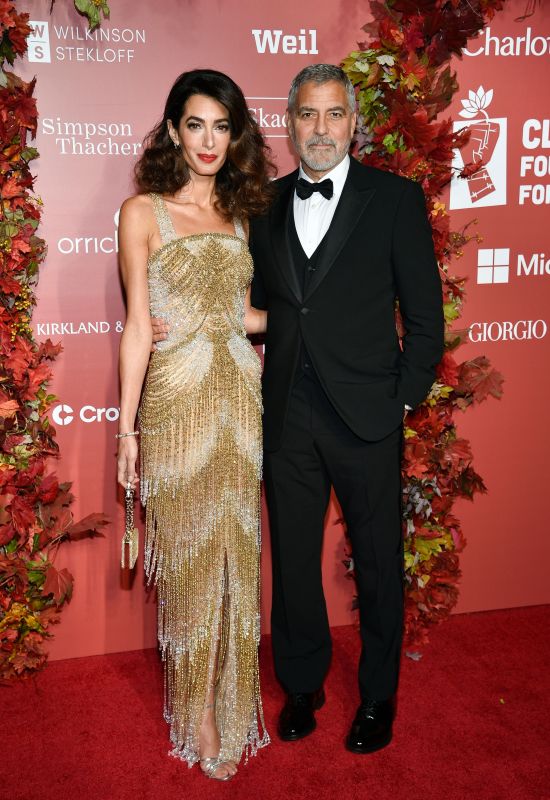 Up Next The Clooneys' big night