On Jan. 6, 2019, the Golden Globes are back! In honor of the ceremony that kicks off award season, Wonderwall.com is revisiting the 2009 Golden Globes to see what the biggest stars were wearing a decade ago… starting with Drew Barrymore, who unleashed her inner fairy-tale princess in this baby blue Dior Haute Couture gown. The whimsical off-the-shoulder dress featured a dramatic fanned hemline designed to look as if it was moving in the wind. The gown was made even more memorable by Drew's decadent diamond cuff bracelet, rhinestone-embellished red satin clutch and perfectly coiffed blonde locks. Keep reading for more amazing Golden Globes fashion from 2009…

At the 2009 Golden Globes, Brangelina was one of the hottest couples in Hollywood. That night Brad Pitt, who looked dashing in his black Tom Ford tuxedo and aviator shades, was nominated for best actor in a drama (for "The Curious Case of Benjamin Button"). Not to be outdone, Angelina Jolie, wearing a shimmery ecru gown from Atelier Versace, was also nominated (for best actress in a drama for "Changeling").

The 2009 Golden Globes had us "Crazy in Love" with Beyonce's gorgeous cream-colored Elie Saab Haute Couture gown. Accentuating every glorious curve of her body, the Grammy-winning singer completed her look with a simple (just kidding) 200-carat Lorraine Schwartz diamond necklace. That night, Bey was nominated for best original song for her single "Once in a Lifetime" from the film "Cadillac Records," in which she also starred.

Former couple Marc Anthony and Jennifer Lopez stunned at the 2009 Golden Globes just one year after welcoming twins Max and Emme. Marc kept it O.G. in his black tux and thick-framed glasses while J.Lo, who came dressed in a revealing gold Marchesa gown, taught us all a thing or two about how to glow.

Anne Hathaway, who was nominated at the 2009 Golden Globes for best actress in a drama for her work in "Rachel Getting Married," slayed the red carpet in this strapless sapphire Giorgio Armani Privé gown. Featuring gorgeous feather-like detail on the bodice and a sweeping organza skirt, Anne's sophisticated fashion was completed with vintage diamond and sapphire earrings from Van Cleef & Arpels.

We're still fawning over Sandra Bullock's cream-colored one-shoulder cowl-neck Christian Dior gown and all its whimsical ruffles. The actress, who was a presenter at the 2009 Golden Globes, accessorized her dress with a powerful turquoise, garnet and gold snake bracelet from Bochic and gold and gemstone earrings from Amrapali Jewels.

Cameron Diaz was decked out in decadent Chanel at the 2009 Golden Globes. The actress was pretty in this pink one-shoulder Chanel Haute Couture gown, which she accented with a blingy diamond ring and earrings from Chanel Fine Jewelry. Even Cameron's silver clutch was from the coveted French fashion house.

"Desperate Housewives" star Eva Longoria brought the sizzle to the 2009 Golden Globes. As a presenter that evening, Eva knew she had to look fierce and she didn't disappoint in this vibrant red mermaid gown from Lebanese designer Reem Acra. The strapless dress featured a scalloped sweetheart neckline that Eva kept bare, allowing her minimal accessories, including diamond earrings from Verdura, a chunky bracelet from H. Stern and a glittering silver clutch, to add extra dazzle to her red carpet look.

Remember when Zac Efron and Vanessa Hudgens were one of the cutest young couples in Hollywood? The "High School Musical" stars arrived at the 2009 Golden Globes arm-in-arm wearing some of the night's best fashion. Zac, who presented that evening, kept it swanky with a Burberry suit and Ferragamo shoes while Vanessa lit up the red carpet in her flapper-inspired floor-length golden Alberta Ferretti gown. The actress accessorized her incredible dress with long strands of pearls and a simple gold clutch.

We need to take a moment to process the drop-dead gorgeousness of "Weeds" star Mary-Louise Parker's dress at the 2009 Golden Globes. Mary, who was nominated for best actress in a TV comedy, wore this stunning strapless royal blue gown from Carlos Miele featuring a unique woven silhouette. She kept her raven locks loose and flowing and her jewelry to a minimum, allowing the dress to stand out on the red carpet.

Viola Davis always manages to look fierce on the red carpet and the webbed tan-and-black gown from Max Azria she wore to the 2009 Golden Globes continued that tradition. Nominated for best supporting actress for her work in the film "Doubt," Viola may not have taken home the statue that night, but her beautiful style, including her chunky bracelets and gold clutch, did manage to take our breath away.

If Demi Moore's champagne-colored Christian Dior gown with a ruffle detail and a stunning cross-halter neckline wasn't sumptuous enough, her platinum and diamond Cartier jewelry, worth more than $600,000, definitely was. The actress, who was a presenter at the 2009 Golden Globes, was joined that night by her then-husband, Ashton Kutcher.

Sleeveless neutral-colored gowns were the style at the 2009 Golden Globes and Penelope Cruz didn't miss out on the trend. The actress, who was nominated that night for best supporting actress for her work in "Vicky Cristina Barcelona" (which won her an Oscar that same year), arrived in a figure-hugging creamy beige dress from Giorgio Armani Privé and elegant drop earrings from Chopard.

Nominated for our favorite dress of the night is Olivia Wilde's 2009 Golden Globes gown from Reem Acra. We're in love with the romantic lilac color, the pattern detail on the bodice, the rhinestone belted waist and the fluffy, voluminous skirt that made Olivia look like she was gliding down the red carpet. The actress complemented her look with diamond earrings from Van Cleef & Arpels and Jimmy Choo heels (not pictured).

At the 2009 Golden Globes, actress Eva Mendes evoked Old Hollywood glam in this pale pink sleeveless gown from Christian Dior. Eva, who was presenting that night, dialed up the look with a vintage turquoise and gold collar necklace from Van Cleef & Arpels' private collection.

Looking beautiful in a black sleeveless Yves Saint Laurent gown with a rhinestone-studded bow at the waist, Kate Winslet shows off her two awards at the 2009 Golden Globes. The star won for best actress in "Revolutionary Road" and best supporting actress in "The Reader." Along with her fabulous dress, Kate accentuated her look with brilliant diamond earrings and a sparkly diamond cuff bracelet from Chopard.

"Confessions of a Shopaholic" star Isla Fisher stayed on-trend at the 2009 Golden Globes with this champagne-colored gown from Carlos Miele. The warm, neutral colors of the dress complemented Isla's red hair and smoky eye makeup while the ruffle detail gave her silhouette a whimsical, dreamlike appeal.

While Seal channeled his inner rock 'n' roll star in all black with a leather dress shirt and elongated suit jacket, his then-wife Heidi Klum incorporated playful color with her vintage polka-dot dress from James Galanos. The sleeveless cocktail pouf dress featured a sweetheart neckline, a fitted bodice and a voluminous skirt accented with an oversized red silk flower. The model and "Project Runway" star finished her look with a jet-black manicure, a diamond and ruby cuff bracelet and dangerously high Christian Louboutin stilettos.

One of the few looks we didn't love at the 2009 Golden Globes was Renee Zellweger's black-and-nude Carolina Herrera ensemble. The dress, which featured a sheer organza top and full-length flared skirt, fit perfectly but the skin-toned bralette she wore underneath made the look awkward and unflattering. Unfortunately, Renee landed on many fashion critics' worst dressed lists that night.

"Gossip Girl" star Blake Lively gave us major feels at the 2009 Golden Globes in this strapless silvery blue Nina Ricci gown. The actress, who was a presenter that night, turned a lot of heads in this body-hugging dress that featured metallic detailing on the bodice and a thigh-high slit. No one looked more in awe of her beauty than Blake's dad, Ernie Lively, seen on the far right.

At the 2009 Golden Globes, a 16-year-old Miley Cyrus proved she was a fashion force to be reckoned with when she arrived wearing this sleeveless empire-waist gown from Marchesa featuring flowing, sheer fabric atop a heavily embroidered column skirt. Miley was nominated that night for best original song for her single "I Thought I Lost You" from the animated film "Bolt."

Laura Linney, who won the award for best actress in a miniseries for her performance in "John Adams," tapped into her inner goddess in this muted yellow one-shoulder Elie Saab Haute Couture gown. Featuring a gorgeous rhinestone-studded belted waist, Laura's dress was a bright spot on the 2009 Golden Globes red carpet.

Megan Fox made her gold Ralph Lauren Collection slip dress pop at the 2009 Golden Globes. The heavily beaded gown featured a skin-hugging floral-motif on the bodice that faded into a skirt with a small train. To round out the look, Megan added chunky jade and gold bangles and dangling earrings and showed off her Marilyn Monroe arm tattoo, which she's since had removed.

"Mad Men" star January Jones took our breath away at the 2009 Golden Globes in this stunning baby blue evening gown (with pockets!) from Versace. The actress, who was nominated for best actress in a TV drama that night, paired the look with gold peep-toe stilettos and a sparkling diamond bracelet from Van Cleef & Arpels. 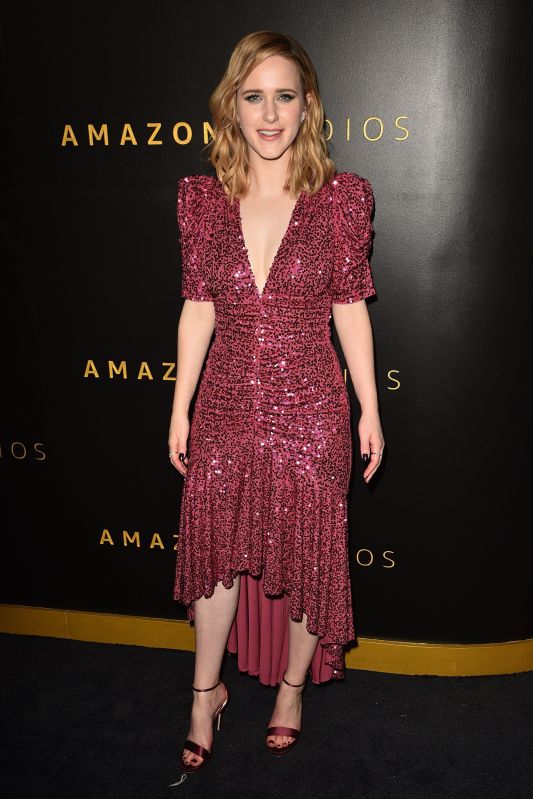