Alicia Silverstone's aware her "attachment-style" approach to parenting has its critics. But as she made clear on the Tuesday, July 19, edition of "The Ellen Fisher Podcast," she's not too concerned about them. "Bear and I still sleep together," the "Clueless" star said of her 11-year-old son, according to Page Six. She quickly joked that she'd probably "get in trouble" for saying that, then dismissed any potential detractors with a laugh. "I don't really care," she admitted. For Alicia, who shares Bear with her ex, Christopher Jarecki, the bond-centric parenting style has worked just fine, she said, delving into some of the unconventional child-rearing methods she stands by after they worked with Bear. While potty-training her son, for example, Alicia said she eschewed diapers for the most part, relying instead on "elimination communication," that involved keeping an eye on "cues" he'd give when he had to go do his business. "It's so awesome. It's so easy. When I was done feeding him, he would go to the bathroom in the toilet. When he woke up from a nap, he went to the bathroom," she said. "The cues part for me was really fun because I thought that he was flirting with me because he would do this little smile. That's when he had to pee," she recalled. She also admitted Christopher was initially suspicious of the approach, which he deemed "hippie s***." But he came around, the star confirmed. "I'm a natural mama, and I'm a loving mama," she concluded. "I believe in love, I believe in nature and our society is scared of nature and love." She wrote as much in her 2014 parenting book, "The Kind Mama," which recommended co-sleeping, among other less traditional approaches to raising kids. Kourtney Kardashian, Heidi Klum and Tori Spelling have also revealed they did or still do co-sleep with their little ones in recent years.

RELATED: 'Clueless' cast: Where are they now?

For the Berlin premiere of his new film, "Bullet Train," Brad Pitt opted for a brown linen skirt designed by Haans Nicholas Mott. And with good reason. Amid Europe's current heat wave, the star had a quick explanation when an Associated Press reporter asked why he'd gone the skirt route. "The breeze," he said with an easy smile, "… the breeze." Whatever the reason for his choice, fans were all for the seemingly 90s-inspired look on Twitter, where one person quipped, "Just when you think Brad Pitt couldn't get sexier, he wears a skirt." Actually, he's worn a skirt before — he's also sung their praises. While promoting "Troy" back in 2004, Brad told British Vogue (via The Independent): "Men will be wearing skirts by next summer. That's my prediction and proclamation."

RELATED: Check out more of this month's best and worst dressed stars

Scratch that split talk — Kendall Jenner and Phoenix Suns player Devin Booker "are fully back on," a source close to Kendall told E! News this week. "They worked out their issues and decided they want to move forward and be together," the insider added. The update comes after a photo on "The Kardashians" star's Instagram Stories over the weekend showed what looked like Kendall and Davin posing in a full-length mirror before a friend's wedding. Though she cropped the pic so you couldn't see either person's face, a fan site video on social media showed the two walking into the spot where the wedding took place, looking very much together. "They moved on and it's going really well," says the E! source. "They have been spending a lot of time together recently and Devin was her date to her friend Lauren's wedding over the weekend in Napa." The couple of two years reportedly took some time apart after attending Kourtney Kardashian and Travis Barker's wedding together in Italy in June. If that was, indeed, the case, the "time apart" didn't last too long. By late late June, they were spotted hanging out on a terrace together at Soho House in Malibu; they also attended a Fourth of July party together, People reported at the time.

Denzel Washington surprised baseball fans at the 2022 All-Star game at Dodger Stadium in Los Angeles on Tuesday, July 19, when he walked on the field before the game to honor one of the most famous Dodgers players in MLB history: Jackie Robinson. Clad in a replica of the No. 42 jersey Jackie wore 75 years ago when he broke baseball's color line, Denzel gave what Deadline called "a stirring remembrance" of the sports and civil rights hero. "When Jackie Robinson stepped onto a Major League Baseball field for the first time, armed with supreme talent and unshakable character, and wearing a Dodgers uniform, he changed the game of baseball, and so much more," Denzel said. "What he carried with him, what he represented, was towering." He went on to list Jackie's many career achievements, telling the crowd, "Beyond the field, Jackie Robinson challenged us to become better versions of ourselves. Business leader, family man, activist, Hall of Famer." Denzel concluded by sharing Jackie's belief "that life is not a spectator sport," noting the legendary player "lived that model to the fullest," both on the field and off, where he stood "tall for opportunity and justice," and "blazed a trail that would light the way for people of every walk of life and every color and to this very day, every generation." Tuesday also marked the 100th birthday of Jackie's widow, Rachel Robinson, a nurse and professor and the founder of The Jackie Robinson Foundation. The league honored Rachel as well, via a video narrated by Octavia Spencer.

With her 60th birthday just a few months away, Demi Moore is embracing the woman she's become, both inside and out. Her new capsule swimwear collection, Demi Moore x Andie was largely inspired by her age-positive outlook, the actress and author recently told People. "It's changing this idea that women become less desirable as we get older," she said of her goal for the line. "We don't want to look matronly or not feel sexy." Demi, who's also modeling the new one-pieces and bikinis, told the outlet she looks forward to "not being defined by a number and instead being defined by my experience" as she enters a new decade. "You hit 59 and you're already thinking, 'Well, I'm going to be 60.' It feels very liberating," she explained. "When I think of my grandmother at 60, she in a way seemed to be already resigned to being old," added Demi, who herself is mom to three daughters. "But I feel, in so many ways, more alive and present than ever."

"Selling Sunset" star Heather Rae El Moussa revealed this week that despite undergoing difficult IVF treatments, the child she's expecting with husband Tarek El Moussa, was conceived naturally. Sharing a batch of new maternity photos late on Tuesday, July 19, Heather called Tarek her "dream man" and their first child-to-be a "miracle baby." "If you know us, you know our journey has been far from 'normal' so of course our pregnancy story is the same," wrote Heather, 34. "I've been really open about my pregnancy journey-we've been doing IVF and went from having seven frozen eggs to being told we were only supposed to get 2 follicles to then being able to get 8 to… having an all natural pregnancy," she continued. "You just never know what life has in store for you. You can plan and try to make things happen all you want but what's meant to be will be so to me, our baby is a miracle baby – the odds were definitely against us but all that matters is that it happened… I just can't wait to hold her/him in my arms." Heather and Tarek, 40, said "I do" in October 2021. They'd initially shared with ET that they had no plans to expand their family — Tarek shares two kids with his ex, Christina Hall — but that soon changed. Heather's also said she was told in her 20s that she has a low egg count, hence the IVF.

In this week's new trailer for "Halloween Ends," we see Jamie Lee Curtis take on her horror movie nemesis of four decades, Michael Myers, as Laurie Strode once more, in what's allegedly the final edition of the long-running franchise. Speaking to People, Jamie Lee recently admitted "endings are very difficult to do in a very satisfying way," but she feels particularly good about how "Halloween" finally, well, ends. "The last shot [filmed] was [part of] a night shoot and I was in a car — it was a close-up of me in the car. And when we got out of the car, it was 4:30 in the morning and there was the picture of my face on the screen," she explained. "And I realized that was the last image of Laurie Strode after 44 years of portraying her. Isn't that amazing? And it felt very satisfying. I think people are going to lose their minds." Elaborating on previous teasers that claimed the new film is "a departure" from the rest of the franchise, which launched in 1978, Jamie said: "The departure is, I think, based on all of the lore, the lore and gore of what Michael Myers has represented, because we've talked a lot in the last release about Michael transcending from a man to something bigger. And the story of Michael has transcended." She continued: "Michael Myers has become something much bigger than a man, and I think what's been really interesting is that we figured out … a way to make a very satisfying movie about human beings and the nature of evil. It's dark for sure, but the world is dark right now." "Halloween Ends" heads to theaters on Oct. 14. 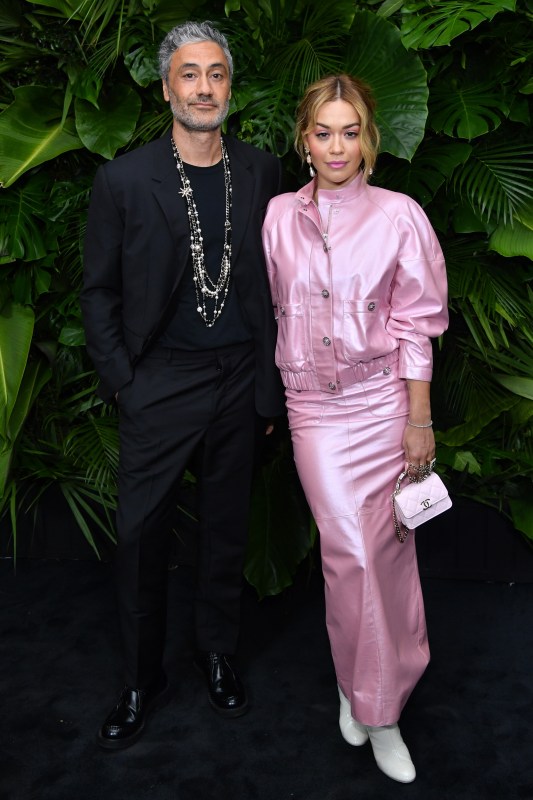