Jennifer Lopez posts and deletes pic of her and A-Rod

Got something to hide, J.Lo? Jennifer Lopez posted and deleted a selfie of what looked like her and Alex Rodriguez over the weekend. In the photo, Jennifer smiles at the camera as a guy who appears to be A-Rod lies back behind her. According to Us Weekly, the singer and her rumored boyfriend took a private plane to Baker's Bay Golf & Ocean Club in the Bahamas, an exclusive resort popular among athletes, on Friday, March 10, after flying to Miami. Jennifer's twins, Max and Emme, reportedly joined her and her new beau on the trip.

Nearly a year after they split, Christina and Tarek El Moussa are making their new relationship work as friends."Honestly, I'm doing really good. I'm in a really good place," Christina told ET over the weekend. "The kids are happy, they're healthy, Tarek and I are in a good spot. We have a lot of things that we're working on, cool things coming in the future, so we're just looking forward," she said, adding that she and her ex are "getting along really, really well right now." She continued: "I think honestly it's just like letting go of past resentment and living in the future, and remembering that kids are the priority," she added. "And we are going to be in each other's lives for forever, so we just decided to put the past in the past and move on." The "Flip or Flop" star also opened up about a book she's been working on. "Going through a divorce is tough on anyone, so I'm just kind of writing about some of the experiences that I've had and things that have really helped me cope, and just hoping I can help people going through similar situations," she said. "Putting the kids first and recognizing the fact that we need to be happy, healthy, wonderful parents [has helped me cope. Other things that have helped me a lot is — I've found yoga, and yoga has really helped me relieve a lot of stress and really helped me think that I have control over my emotions and just really find peace." In part, she's found that sense of calm through fans' reactions to her divorce. "People grew up with our family," she said. "They just want what's best for us. I've had a lot of outreach, a lot of very positive messages from people that have been in similar circumstances and, you know, just — they are keeping us in their thoughts and prayers which has helped a lot."

Kylie Jenner is releasing a new line of Lip Kits

Kylie Jenner's gearing up to sell out another round of Lip Kits. On Thursday, March 16, Kylie unveils the Velvet collection, featuring "creamy, non-drying liquid lipsticks" in shades dubbed Rosie, Harmony, Charm, and Dazzle, according to a recent Snapchat post (via JustJared). The kits are part of Kylie Cosmetics, the brand the teen launched after her first Lip Kits proved to be a huge hit.

Mark Wahlberg is adding more than $10 million bucks to his bank account, courtesy of AT&T. According to the New York Post, the actor has signed on as a spokesperson and is slated to create original content for the network, which Forbes recently named the thirteenth most valuable brand in the world. The contract comes on the heels of Justin Bieber's T-Mobile Super Bowl commercial and Jamie Foxx and Ricky Gervais' Verizon deals. "This is an all-out celebrity mobile war," a source told the Post. "The competition is so fierce, and the stakes keep getting bigger, that the mobile networks are spending more and more money to outdo the rest."

There's no truth to rumors Princess Diana's onetime flame and former horseback riding instructor James Hewitt is the biological father of Prince Harry, James said on the Australian show, "Sunday Night," over the weekend. Asked directly if he was the royal's dad, the ex army captain said, "no, I'm not," according to the New York Post. Describing his five-year-long affair with Diana, James said, "It's a gradual period and then, you know, suddenly you can't get enough of each other or see each other as much as you want." The pair reportedly enjoyed trips to Devon together while Diana's relationship with Prince Charles was coming to an end. "I'd cook, and [Diana] would wash up. Just dinner and relaxing and laughing," he said.

James Franco's new directorial effort, "In Dubious Battle," is not doing so well in the acclaim department. Salon reports the film, an adaptation of Steinbeck's story about apple pickers in the '30s, recently had a 29 percent rating on Rotten Tomatoes. But James isn't letting that get him down. "What can I say? I think it's going to change. My hope is that as a sensitive and creative person, I can't and won't let it kill my spirit," he told the website. Asked why he took on the "lofty" literary project, he explained: "When I started as an actor, if I listened to that criticism, it can destroy you as a creative person. My hope is that it's going to change."

Christina Grimmie's family releases music video ahead of her birthday

Christina Grimmie would have turned 23 on Sunday, March 12. In honor of her birthday, the singer's family shared an animated video of her song, "Invisible," with the caption, "We created this video as a special tribute to honor that love and her desire to always bring light and love into the heart of others," according to Us Weekly. Christina, who was shot and killed in Orlando, Florida, by a man who later killed himself, appears as a superhero in the clip.

Is Angelina Jolie dating someone new?

Reports claiming Angelina Jolie has moved on from Brad Pitt with a "handsome mystery man" are false. Photos showing the newly single Angie with an attractive man in Cambodia last month were actually just pictures of the actress and director with a bodyguard, GossipCop reports. Angie was recently spotted leaving Hamley's gift store in London with four of her six kids after picking up some toys for them. 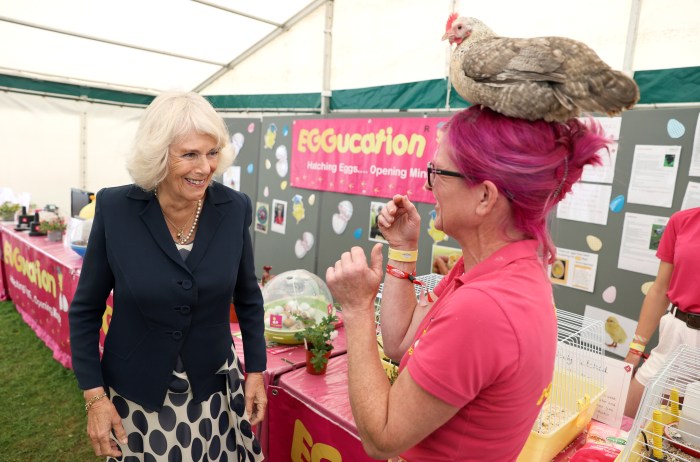 Up Next Laid to the game