After two high-profile Hollywood marriages, Jennifer Aniston is ready to meet someone whose life doesn't involve red carpets and premieres. "The Morning Show" star, 52, recently sat down with People TV, where she was asked if she thinks it's possible for relationships to work when one partner is a celebrity and the other is not. "Of course," she replied. "Absolutely. I mean, it's happened. That's what I'm sort of hoping for — is not necessarily somebody in the industry itself. … That'd be nice." Jen, who returns to Apple TV+ with Reese Witherspoon for Season 2 of "The Morning Show," was married to Brad Pitt from 2000 until 2005. Her second marriage to an actor, Justin Theroux, ended in 2018. Right now, though, Jen's more focused on her work and life at home than dating, as the coronavirus pandemic continues amid a surge of delta variant cases among the unvaccinated. During an in-studio chat with her close friend Jimmy Kimmel on his show this week, the actress said she won't even be attending the Emmy Awards this weekend, despite being up for an award with her "Friends" reunion special costars in the Outstanding Variety Special (Pre-Recorded) category. "No, I will not be going," she told Jimmy after explaining that because of COVID-19, she's sticking to seeing close friends or going to work as far as outings. "This is a big step for me to just be here," she told the late-night host. "So I'm just [taking] baby steps."

On Sept. 14, days after Britney Spears and her longtime boyfriend Sam Asghari announced their engagement, JustJared noticed the singer's Instagram account had gone blank. In place of scores of videos of Britney dancing and working out were messages that read, "no posts yet" and "user not found," suggesting the whole page had been deactivated. The update came amid news Britney's father, Jamie Spears — who's still her estate conservator, despite his recent filing to end her long-running conservatorship — was actively looking for a divorce lawyer to hammer out the terms of a prenup for Britney and Sam. Britney later popped up on Twitter to tell fans she was just taking a social media break in the wake of Sam's proposal. "Don't worry folks … just taking a little break from social media to celebrate my engagement!!!! I'll be back soon," she wrote.

When Kim Kardashian West hit the 2021 Met Gala red carpet in an all-black, face obscuring Balenciaga look, it was clear the move had something to do with her ex, Kanye West. For starters, she was accompanied by a masked man in the hoodie version of her ensemble who drew fast comparisons to 'Ye. The man turned out to be Balenciaga's creative director, Demna Gvasalia, who Kanye introduced to Kim … but there's still more to the story. Just before the Met Gala, fans noticed Kanye had unfollowed Kim on Instagram. He re-followed her just in time for the big event on Sept. 13 — just as Kim changed her Insta profile to a blacked-out image that matched her soon-to-be ex-husband's. She's since changed the profile pic back — the brief change was spotted by Yahoo and other outlets — but as of Sept. 14, most of the 24 accounts the rapper follows, including celebs like Solange Knowles, were also flipped to the blacked-out image. All these tidbits sure feel like hints about some upcoming Kanye promo — a Balnciaga x Kanye, perhaps? — but maybe Kim's involved in whatever we're being teased with, too. After all, before she appeared in her ex's "Donda" listening party in a wedding gown, she showed up at the previous listening events clad in outfits that matched her estranged husband's. Guess we'll have to wait and see …

The comedy world said "goodbye" to an icon on Sept. 14, after "Saturday Night Live" alum Norm MacDonald lost his private battle with cancer at 61. Norm, who anchored the "Weekend Update" segment on "SNL" for three seasons before launching his own eponymous show, was diagnosed with cancer 9 years before his unexpected death. "I am absolutely devastated about Norm Macdonald," wrote Conan O'Brien on social media after hearing the news. "Norm had the most unique comedic voice I have ever encountered and he was so relentlessly and uncompromisingly funny. I will never laugh that hard again. I'm so sad for all of us today." Other comics, like Norm's onetime "SNL" costar Adam Sandler, praised not only Norm's "fearless" sense of humor, but also his strength as a father and friend. "Every one of us loved Norm," Adam posted. "Some of the hardest laughs of my life with this man. Most fearless funny original guy we knew. An incredible dad. A great friend. A legend. Love u pal."

One day after Nicki Minaj declared she was skipping the 2021 Met Gala and would not be getting inoculated against COVID-19 "for the met," her claims about the vaccines continued to spark strong reactions from the medical world on Twitter. Nicki initially posted that she would not be getting the jab until "I feel I've done enough research" about the vaccines, saying she was "working on that now." She also said she would probably get vaccinated at some point in order to tour. But what doctors took issue with was a tweet that began, "My cousin in Trinidad won't get the vaccine cuz his friend got it & became impotent …," before going into detail about the inflammation the cousin said he experienced. A doctor identifying themselves as "Ashley Winter, MD," replied to tell Nicki, "I AM A BOARD CERTIFIED UROLOGIST. The vaccine does not cause orchitis …," the swelling she'd referred to. "Something else caused that … Misinformation kills." Soon, another doctor weighed in. "I second this as a board certified urologist … The actual COVID 19 infection has been linked to [male sexual] dysfunction," wrote Rena Malik MD. She added, "learn about the data before you tweet damaging information." A third doctor went as far as offering to sit down with Nicki and discuss her concerns. "Nicki, I'd love to talk to you about the COVID vaccine," wrote Dr. Uché Blackstock, the founder of a group called Advancing Health Equity. "Impotence is significantly more likely from COVID and there have been no documented cases of impotence associated with the COVID vaccine," she added. The CDC has repeatedly announced that no data suggests any of the vaccines contribute to fertility problems for men or women, citing multiple studies.

Alanis Morissette slams HBO for 'salacious' new film about her

Alanis Morissette is slamming "Jagged," HBO's new film about her and her most successful album, "Jagged Little Pill," as "salacious," and accusing its filmmakers of including an untrue narrative. In a statement published by People this week, the singer, 47, explains: "I agreed to participate in a piece about the celebration of Jagged Little Pill's 25th anniversary and was interviewed during a very vulnerable time (while in the midst of my third postpartum depression during lockdown). I was lulled into a false sense of security and their salacious agenda became apparent immediately upon my seeing the first cut of the film." She continues: "This is when I knew our visions were in fact painfully diverged. This was not the story I agreed to tell. I sit here now experiencing the full impact of having trusted someone who did not warrant being trusted. I have chosen not to attend any event around this movie for two reasons: one is that I am on tour right now. the other is that, not unlike many 'stories' and unauthorized biographies out there over the years, this one includes implications and facts that are simply not true." Alanis concludes: "While there is beauty and some elements of accuracy in this/my story to be sure — I ultimately won't be supporting someone else's reductive take on a story much too nuanced for them to ever grasp or tell."

"Jeopardy!" kicked off a new season on Sept. 13, with the show's executive producer and would-be new full-time host, Mike Richards, handling the late Alex Trebek's duties. It was just one of the five shows Mike had taped in August the week an expose from The Ringer revealed he had a long history of making offensive and derogatory comments about women, people with disabilities and others. The scandal that ensued led the show's brass to axe Mike as host, returning him to his EP role. None of this, however, was mentioned during Mike's first episode — even though viewers will soon see him replaced by guest hosts. The radio silence on the matter confused critics at Variety, Deadline, Vulture and more outlets, with Vulture asking if the episode's opening tribute to Alex was meant "to distract" the audience from Mike's controversy. Variety, meanwhile, warned that "Jeopardy!" "… needs to do more than its current strategy of hoping people don't notice that it's melting down" if it aims to survive. Mike's pre-taped episodes continue through Sept. 17.

While the end of Britney Spears' conservatorship is on the horizon, another former child star who's struggled with mental health issues will remain under a similar legal arrangement for another year and a half. TMZ reports a recent status hearing for Amanda Bynes — who's been under a conservatorship since 2013 — ended with a judge scheduling the next hearing for January 2023. While most details about the hearing remain sealed, the former actress, 35, will presumably continue to have her mother, who serves as her conservator, handle duties related to her medical and financial decisions until then, if not longer. 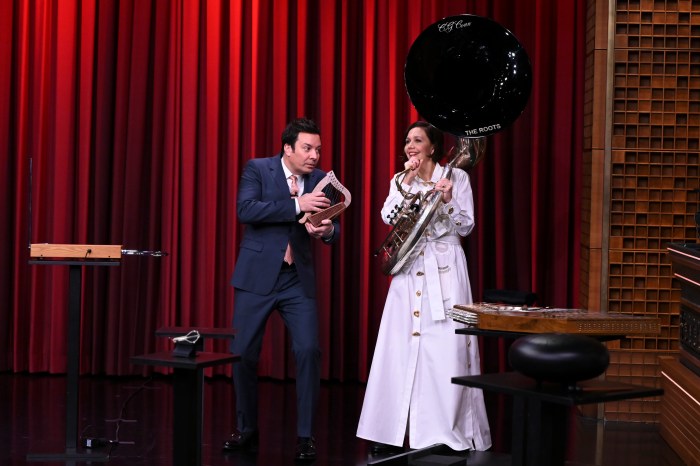