Not everyone was laughing at Chris Pratt's joke. On Oct. 2, Chris posted about voting, but it had nothing to do with the 2020 election, major party candidates or any hot-button issues. Instead, he encouraged his fans to cast a vote for a 2020 People's Choice Award for his animated movie "Onward." "With all that's going on in the world it is more important than ever that you vote. Just ask any celebrity. They will tell you. Every day. Several times a day. To vote. But me? I will tell you EXACTLY who to vote for," he wrote. "The heroes before us did not spill their blood only to have their sacrifices wasted by your apathy. The upcoming 2020 People's Choice Awards is the most consequential vote in the history of mankind times a million infinity. Vote for #Onward for family movie of the year. Or else. You WILL die. No hyperbole." The jury was split on whether the joke was funny or not funny or tacky. Some liked that Chris didn't get political (while they, themselves, got political in their responses.) Others thought it was "insensitive." "I wish I found this funny," wrote one commenter.

Another day in 2020, another legend lost. On Oct. 6, Eddie Van Halen passed away following a lengthy battle with cancer. Eddie's son, Wolfgang, announced the news on social media. The Van Halen co-founder was surrounded by his family at Providence St. John's Hospital in Santa Monica, California, when he took his final breath. Widely considered one the greatest guitar players of all time, Eddie had been traveling to and from Germany for more than five years to treat throat cancer, which developed years after he was diagnosed with tongue cancer in 2000. In 2015, the former smoker speculated that it was caused by brass and copper guitar picks he used to frequently hold in his mouth and electromagnetic radiation he was exposed to in recording studios. Ex-wife Valerie Bertinelli revealed on Twitter that Eddie more recently had lung cancer. Following his death, artists from all walks of music publicly mourned the rock star. Gene Simmons called EVH a "Guitar God." John Mayer called him "a true virtuoso." He added, "I never stopped watching him in adolescent awe and wonder, and I promise you I never will." Keith Urban was shattered by the news. "There are lots of great guitar players in the world, but very VERY few true innovators," he wrote. "Players who seem to have arrived from a far distant planet , and who bring a completely new color to the rainbow. Eddie Van Halen was this and so much more." R.I.P., EVH.

Anne Heche revealed that she lost out on a decade of work — including at least one blockbuster film — due to her highly publicized relationship with Ellen DeGeneres 20 years ago. Before being eliminated from "Dancing With the Stars" on Oct. 5, Anne spoke about the impact of her three-year romance with the comedian from 1997 to 2000. "My story is a story that created change in the world, moved the needle for equal rights forward," she said. "In 1997, I met Ellen DeGeneres at the Vanity Fair party and that was the night that changed my life forever. My movie premiere for 'Volcano,' I had told them that I was taking Ellen as my date and I was told if I took Ellen I would lose my Fox contract. At that moment, she took my hand and said, 'Do what they say,' and I said, 'No thanks.'" At that time, the world was not ready for an unapologetic and high-profile same-sex relationship between women. "I took Ellen to the premiere and I was ushered out by security before the movie even ended and was told I was not allowed to go to my own afterparty for fear they would get pictures of me with a woman," Anne said. "I was in a relationship with Ellen DeGeneres for three-and-a-half years and the stigma attached to that relationship was so bad that I was fired from my multimillion-dollar picture deal and I did not work in a studio picture for 10 years."

Country singer Morgan Wallen was dropped from his "Saturday Night Live" performance set for Oct. 10 after breaking COVID-19 protocols. In the middle of the week, video showed the "Whiskey Glasses" singer maskless and kissing women at a college party in Alabama. "My actions this past weekend were pretty short-sighted and they have obviously affected my long-term goals and my dreams," he said in an apology video on Oct. 7, adding that he had not tested positive for COVID-19. Morgan said that he hopes to play on "SNL" in the future. In the meantime, he plans to step away from the limelight for the time being. "I think I have some growing up to do. I think I've lost myself a bit. I've tried to find joy in the wrong places… and it's left me with less joy so I'm going to try to work on that," he said. "I'm going to take a step back from the spotlight for a while and go work on myself… It may be a second before you heard from me for a while… I'm going to work on me." While Morgan is out, could Jeff Goldblum be in?

Say hello to Eboni K. Williams, the first ever Black cast member in the 13-year history of "The Real Housewives of New York City." On Oct. 8, the attorney and television host confirmed the news that she's joining the hit Bravo show. "NYC is filled with successful and dynamic Black women. I'm excited to join this legendary franchise as the first Black housewife," she said in a statement. "Can't wait to share a slice of life in this city that hasn't been seen before. Anyone who's aware of my work knows I don't hold back. I'm going to keep it just as real here as I do everywhere else."

As President Donald Trump returned to the White House following a three-day hospitalization for COVID-19, he claimed he felt 20 years younger. "Don't be afraid of Covid. Don't let it dominate your life," he wrote. Following his statement, Hollywood, a typically liberal bunch, unleashed. Chris Evans wrote, "Don't be afraid of Covid?! You've been under round-the-clock care by the best doctors using the best drugs. Do you really think everyone has access to that?! Sadly, I'm sure you're aware of that disparity, you just don't care. This is reckless to a shocking degree, even for you." Amanda Kloots, who lost her husband, Broadway star Nick Cordero, to complications of the coronavirus, went hard. "Unfortunately it did dominate our lives didn't it? It dominated Nick's family's lives and my family's lives. I guess we 'let it' — like it was our choice?? Unfortunately not everyone is lucky enough to spend two days in the hospital," the normally non-political actress said. "I cried next to my husband for 95 days watching what COVID did to the person I love. It IS something to be afraid of. After you see the person you love the most die from this disease you would never say what this tweet says. There is no empathy to all the lives lost. He is bragging instead. It is sad. It is hurtful. It is disgraceful." While Trump's comments had the support of a few conservative Hollywood stars, he has overwhelmingly been dubbed "cruel" and "stupid."

Kelly Dodd is catching backlash. Haven't we heard this before? On Oct. 4, the "The Real Housewives of Orange County" star posted a multitude of photos to Instagram from her bridal shower. One of the images showed her wearing a hat that read "Drunk Wives Matter," a play on the Black Lives Matter movement. Fans were not feeling it, believing she was mocking the movement. She was called "out of touch," "insensitive" and "callous" for wearing the hat. On Oct. 6, Kelly, as she's done before, half-heartedly apologized. While confirming speculation that the hat was a gift, Kelly said, "It was not intended to offend or make any kind of statement. Of course I support black lives and racial equality!" Other fans were taken aback that no one seemed to be wearing masks for social distancing as the bride-to-be celebrated. Kelly, who has been blasted for her coronavirus beliefs in the past, replied to a fan who cited President Trump's hospitalization for COVIDD-19. "He's 74 and fat!!" After another person slammed her for that response, Kelly said of the virus, "You get sick and get better!!"

There's a baby on the way for Katharine McPhee and David Foster. On Oct. 8, multiple outlets reported that Kat, 36, and David, 70, are expecting their first child together. While this will be the "American Idol" singer's first child, it will be David's sixth. His five children are all adults (and four are older than Kat.) News of the pregnancy came after she was photographed sporting an obvious baby bump at lunch in Los Angeles. Paparazzi pictures also showed the couple shopping in baby stores. There had been some suspicion that the Broadway star was expecting, as on Oct. 3, she sang "She Used to Be Mine" from "Waitress" for a YouTube video. During the line in which she sings, "… and the life that's inside her, growing stronger every day," Kat touched her stomach.

The breakup between "The Bachelor" stars Colton Underwood and Cassie Randolph has gotten even uglier, and authorities are now investigating. Last month, Cassie obtained a temporary restraining order against Colton after alleging he'd stalked and harassed her. That restraining order has now been extended to Nov. 6. Further, TMZ reported that Cassie has now filed a police report claiming the former NFL player put a tracking device on her car after they split so that he could follow her moves. The case is now in the hands of police.

Surprise! Actress-writer Mindy Kaling dropped a bombshell during an appearance on "The Late Show with Stephen Colbert" on Oct. 8: She secretly gave birth to her second child last month without ever letting the world know she was pregnant. "I'm telling it for the first time now … I gave birth to a baby boy on Sept. 3," she told the host, revealing that she's named her son Spencer. He joined big sister Katherine, who's nearly 3. 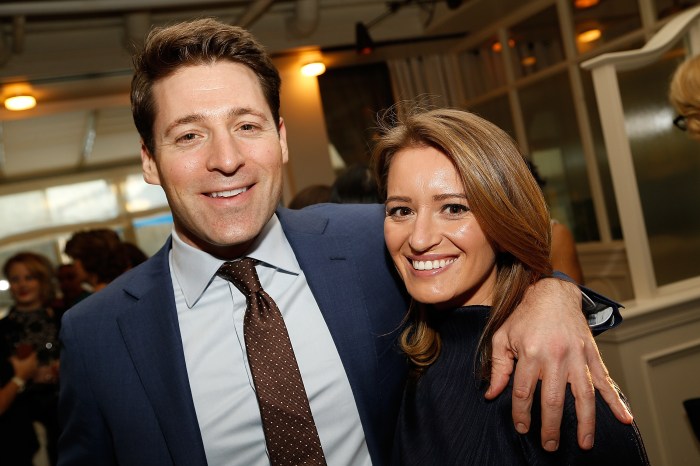