Earlier this month, Demi Lovato told Ellen Degeneres she was "single" and had been "spending Saturday nights" solo while focusing on some self-work. Well, what a difference a stay-at-home order makes. People confirmed last week that Demi and actor Max Ehrich, are indeed a couple. And it seems like the two may be quarantining together. On Monday, March 30, Max shared a photo of himself lying down next to Demi's pup, Batman. After he captioned the post, "quarantine daze," Demi chimed in to call Max and Batman, "My angels 😍." Other cute social media exchanges between the two have included Demi's recent accidental interruption of Max's IG Live session and her flirty response to a shirtless pic he posted last week.

The great state of New Jersey has a new poster child for flattening the curve. On Monday, March 30, Mike "The Situation" Sorrentino popped up on New Jersey Gov. Phil Murphy's Twitter via video to tell his fellow Jerz-ians it's time to, wait for it, "take this situation seriously." Fresh off his eight-month tax evasion sentence, Mike opens his PSA with this Abe Lincoln-meets-"Jersey Shore" gem: "This message is for the people, by the people: We got a situation." Speaking to the camera, Mike then urges Twitter users to stay at home during the coronavirus pandemic, telling viewers, "New Jersey is tough. We love to party and we love even harder. But the time for parties is over." He goes on to say, "Some of us are not taking this situation seriously. In fact, some of us are prolonging this pandemic by not following simple guidelines," without mentioning his own recent "guideline" slip that landed him in prison. Anyhoo, he then advises New Jerseyites to, "Stay home, be positive, and practice social distancing," closing with, "The comeback is always greater than the setback." According to The Hill, New Jersey had reported upwards of 16,000 cases of COVID-19 and nearly 200 deaths from the disease as of Monday.

RELATED: See which celebrities have tested positive for COVID-19

On her Instagram Live show, "Bright Minded" last week, Miley Cyrus gushed to Hilary Duff about her "Lizzie McGuire" fandom as a kid. When Millie Bobby Brown stopped by the show this week, it was Miley's turn to bask in some love from a younger fan-turned star. According to E! News, Millie revealed Miley's portrayal of Hannah Montana was the "only way" she could figure out how to nail an American accent. "I'm surprised you don't have a country accent," Miley joked in reply. The "Stranger Things" actress also recalled learning "every single dance move" to Miley's "Hoedown Throwdown" bit and said she pursued acting because she wanted Miley's job. "Like, I didn't know how to get your job but I was like, 'I want to be like, you know, Hannah Montana. I don't know how to do it,'" Millie shared. "And then I realized it was an actual job. And I was like, 'I want to do that. That sounds fun.' I didn't even know you could get money for it. I was like, 'I'll do it for free!'" Fast forward to last fall and Millie, 16, signed a $6 million-plus contract to play Enola Holmes in a new movie based on the YA book series.

Selma Blair has some experience when it comes to getting bad news from the doctor. Speaking to Miley Cyrus on the singer's "Bright Minded Monday" Instagram show this week, Selma discussed her MS diagnosis and how she's dealt with it in light of the ongoing coronavirus pandemic. "This moment is what we have [even though] we hope for more," she said, admitting that she has experience with "receiving medical news that can immediately feel terrifying" (via People). "But even how we show our grace and being there for our loved ones, with keeping ourselves strong and also being vulnerable — which is a form of strength, to me, and has helped me, for other people to shoulder stuff when I've been nervous," Selma continued. "So to be open, but also really take this opportunity to be the best you can be, to help your days along." Finally, she pointed out that while she's more likely to suffer severe consequences if she does contract COVID-19, she said she's "not at risk of dying" as long as she avoids getting the virus. "I just really look in the moment, cause now I'm a middle-aged woman with an incurable disease and it doesn't even matter," Selma explained. "Anyone can be, God forbid, hit by a car on a Tuesday afternoon, so [we] all [should] just really do what we can to enjoy this [life] and help our children or parents or neighbors."

Savannah Guthrie reunites with Hoda Kotb on the set of 'Today'

"Today" co-hosts Savannah Guthrie and Hoda Kotb were finally together again in Studio 1A on Tuesday, March 31, following Savannah's two-week quarantine at home. "I was going to say, so many things right now are not normal and in this moment, right now as I'm looking at you, something finally is," Hoda told her pal (via USA Today). "Good to see your face." The co-hosts kept at least six feet between them in spite of Savannah being cleared to return to the set after she came down with a sore throat and a runny nose around the same time an employee on the show tested positive for coronavirus. Savannah also made a point of telling Hoda she wished they were "closer … but we're practicing our social distancing."

Emma Watson's spent much of the past few years using her platform to fight for gender equality. At some point, her efforts caught the attention of Gloria Steinem, who gave her a copy of author and professor Valerie Hudson's book. "Sex and World Peace," sparking Emma to post about Valerie on International Women's Day. Thanks to Teen Vogue, Emma recently had the chance to chat with Valerie about everything from relationships to life as a single woman to Emma's HeForShe campaign work and beyond. The "Little Women" actress also elaborated on the idea of being "self-partnered," a term she used to describe her dating status in the November edition of British Vogue. "For me, it wasn't so much about coining a word; it was more that I needed to create a definition for something that I didn't feel there was language for. And it was really interesting because it really riled some people up!" Emma explained. "It was less for me about the word but more about what it meant — just this idea that we need to reclaim language and space in order to express ourselves because sometimes it's really not there."

Lizzo gets a warm thank-you from New Orleans area hospital

Lizzo just joined the growing list of pop stars doing what they can to support coronavirus relief efforts — and she did it in a super personal way. On Monday, March 30, New Orleans' West Jefferson Medical Center announced the singer had surprised its medical staff with lunch. "WE JUST LOVE US SOME LIZZO!" the hospital posted on Instagram, sharing Lizoo's video message. "Not only did she donate food to the West Jefferson Medical Center Staff, she sent us this heartwarming message to go along with it! @lizzobeeating, WE are definitely feeling the love and we love you right back! 💚💚💚." The video shows Lizzo, who went to high school and college in Houston, telling the camera, "Shout-out to the West Jefferson Medical Center, OK?! That's my last name!" She goes on to say: "I just want to let y'all know how much we appreciate y'all for putting yourselves on the front lines to protect us during this pandemic. This time is so scary for a lot of people, and y'all are peace of mind and heroes for a lot of us — myself included." Before signing off, she tells the hospital team she hopes they enjoy their food and are feelin' the love coming their way from around the world. Lizzo was scheduled to perform at Jazz Fest in New Orleans in May prior to the festival's postponement, but it wasn't the concert date that inspired the donation. The singer announced this week she and her team are sending lunch donations to hospital staff across the country in places that have been the hardest-hit by Covid-19. As of Tuesday, Louisiana had the country's highest rate of Covid-19-related deaths and the third-highest number of confirmed coronavirus cases, per capita.

Like Lizzo, Blake Lively and Ryan Reynolds are throwing their financial support behind the health care community. TMZ reports the couple followed up their recent $1 million donation to Feeding America and Food Banks Canada with a combined $400,000 donation to four hospitals in the state of New York, which now has had more positive cases of COVID-19 than China's Hubei province, where the outbreak began. The couple's funding went to NYU Hospital, Mount Sinai, Northern Westchester and Elmhurst. Ryan also recently announced a campaign to raise money for bartenders via his Aviation Gin.

From 2015 through 2017, Prince William worked as a helicopter pilot for the East Anglian Air Ambulance. Now, he reportedly wants to go back to his old job in order to support the medical community as it wages war on COVID-19. That's according to The Sun, which quoted a source as saying William "has been seriously considering returning as an air ambulance pilot to help in the current pandemic," (via Page Six). "He knows the whole country is doing its bit and he wants to help," the source continued. "But it's complicated as he was originally grounded from the job so that he could become a senior working royal." William and Prince Harry's father, Prince Charles, has tested positive for the coronavirus. He and Duchess Camilla, along with Queen Elizabeth II and Prince Philip are all self-isolating because of the diagnosis.

Mark Consuelos celebrated his 49th trip around the sun on Monday, March 30, with plenty of love and adoration from his wife, Kelly Ripa. The "Live!" host feted Mark on Instagram by sharing a sweet photo montage of his life through the years. "Happy birthday @instasuelos," she captioned the post. "There's nobody I'd rather be locked down with than you." Mark thanked her in Spanish, writing, "Grazie Amore," in response. The couple — who share children Michael, 22, Lola, 18, and Joaquin, 17 — are set to ring in their 24th wedding anniversary in May. 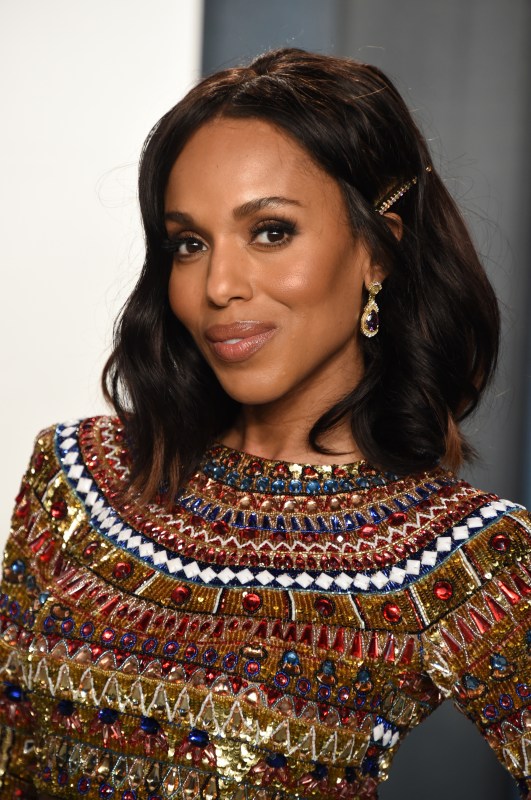 Up Next Fourth of July Buzz