Getting JoJo with it

"Dancing With the Stars" history was made on Sept. 20 when JoJo Siwa danced with same-sex partner Jenna Johnson. "I have never felt those kind of nerves that I did [Monday] night … I didn't know what to expect," Jenna told Page Six afterward. "I was so nervous for [JoJo], and for people's responses, because this is very different and this is a very big step forward." Once Jenna and JoJo's names were officially announced — the celebrity-pro pairing were kept secret until the premiere — she calmed down. "I just felt at peace, and that was very reassuring to me. That like, 'This is what I'm supposed to be doing right now, and this was meant to be,'" she recalled. "If JoJo has this courage to do this very scary thing, then I can as well. So it was all sorts of emotions, but it was very, very thrilling."

A barefoot and reportedly inebriated Nicolas Cage was kicked out of a Las Vegas restaurant after a beef with staff on Sept. 13, a Sept. 23 report from The Sun revealed. The U.K. tabloid published a short video of the actor sitting on a sofa and mumbling inside Lawry's Prime Rib. "We were at that bar at Lawry's when we noticed what we at first thought was a homeless man completely drunk and being rowdy," a source told The Sun. "To our shock it turned to be Nicolas Cage. He was completely smashed and was getting into a bit of a fight with the staff." Video showed the Oscar winner being led out of the restaurant while struggling to stay upright. He appeared to try to re-enter, but a woman blocked the door. "He was in a really bad state and was walking around shoeless," the source added. "Staff told us he had been downing shots of tequila and 1980 Macallan whiskey."

Willie Garson, the actor who famously portrayed Stanford Blatch on "Sex and the City," passed away from pancreatic cancer this week. He was 57. On Sept. 21, Willie's son, Nathen Garson, announced the news on Instagram; the cause of death — Willie had not publicly revealed he was ill — was confirmed in his obituary in The New York Times days later. Willie made a huge impression on the HBO show and was set to return to the role on the upcoming reboot "And Just Like That…" After his death, many of his "Sex and the City" and "White Collar" co-stars and other Hollywood fans and friends expressed sadness on social media. "I am thankful for all of the time we had and grateful that so much of your bright light is on film forever," Kristin Davis said.

And just like that, Britney Spears is back on social media. Exactly one week after going on a hiatus, the pop star returned to Instagram to share images from a trip to Palm Springs, California, with new fiancé Sam Asghari. "I couldn't stay away from the gram too long so I'm back already," she said on Sept. 20. In other Britney news, on Sept. 22, her attorney formally filed documents to end her conservatorship. Britney is asking that a "termination plan" be formulated immediately so the conservatorship can wind down in its entirety, TMZ reported. Still, Britney and her team want Jamie Spears, her father and the conservator over her estate, off the conservatorship immediately and are asking a judge to put a temporary conservator in place as she tries to end it. In legal docs, she asked the court to end "the Kafkaesque nightmare imposed upon her by her father so that her dignity and basic liberties can be restored."

Elvira actress Cassandra Peterson, who popularized the iconic character nearly 40 years ago, revealed in a new memoir — "Yours Cruelly, Elvira: Memoirs of the Mistress of the Dark," which was published on Sept. 21 — that she's been in a serious, committed relationship with another woman (her former trainer, Teresa Wierson, whom she calls "T" in the book) for nearly two decades. "Keeping a secret doesn't feel good," the 70-year-old star told the Daily News. "I'm glad to have it out there. I mean, it does worry me. I have moments where I go, 'Maybe people won't like me anymore' and 'Maybe I won't get work anymore,'" she admitted. "It's ridiculous to think that, but I have friends who are gay and have come out of the closet and it affected their work, relationships and their life. So it's not so far-fetched to be worried. But on the other side of that, it's so draining keeping it a secret. It's not good for you, it's not good for us. It sucks the energy out of you." Cassandra said that while she's attracted to men as well, "I just met this particular person, and I fell in love." She elaborated in an interview with TooFab, "I try to explain to people, I don't think I'm coming out. But on the other hand, I sort of am," she said. "I still consider myself straight, even though I was attracted to a woman … but now there's so many different things, you can be gender fluid, just attracted to that person."

Brendan Morais's controversial stint on "Bachelor in Paradise" might be costing him in the pocketbook. The Sun reported that the model lost a sponsorship opportunity with NordicTrack due to his appearance on the ABC reality show. Brendan, however, told Page Six that the end of the sponsorship isn't really news, claiming it was only supposed to be for a limited time. "While neither myself nor my manager have been in contact with NordicTrack regarding this matter, my partnership was never supposed to be long term," he said. "With that being said, I completely understand companies need to consider reality TV edits in order to protect their brand, I just know there is more to me than what the audience gets to see for an hour once a week." Brendan quickly fell into "villain" territory after it was revealed that he and Pieper James were in relationship before both went on the reality TV show. Yet despite dating Pieper, Brendan romanced fan favorite Natasha Parker on the show. When Pieper entered the show, Brendan quickly steered his attention to her. Brendan and Pieper were also later caught on camera discussing their growing Instagram followers, screen time and media coverage about themselves. Rachael Kirkconnell is reportedly helping Pieper navigate her way through the scandal.

Third time's the charm? "Flip or Flop" star Christina Haack announced on Sept. 20 that she's engaged again, confirming that her boyfriend, Texas realtor Joshua Hall, popped the question. The reality TV star shared an Instagram image of her ring and captioned the post with emojis including a heart, a diamond ring, a lock, a key and an infinity sign. For well over a week, engagement speculation had mounted as Christina posted and deleted several images of herself wearing a ring. This will be the HGTV star's third marriage, as she was previously hitched to Tarek El Moussa and to Ant Anstead.

The Emmys scored ratings surprisingly higher than most people expected. According to ViacomCBS, about 7.4 million viewers tuned into TV's biggest night on Sept. 19 — an increase from 6.4 million in 2020, which was the lowest ever for the Emmys. For those who tuned in, they saw "The Crown," "Mare of Easttown" and "Ted Lasso" all have big nights. Afterward, however, most people were talking about Seth Rogen and Conan O'Brien. Seth, a presenter, mocked the show's COVID-19 safety protocols. "There are way too many of us in this little room! What are we doing? They said this was outdoors! It's not! They lied to us!" he said. "We're in a hermetically sealed tent right now. I would not have come to this. Why is there a roof?" Vaccinations were required, as were negative COVID tests (and Los Angeles County ruled it a safe zone). Conan, meanwhile, crashed Stephen Colbert's victory speech and shouted loudly from his seat when the CEO of the Television Academy came on stage to announce the Governor's Award, which went to Debbie Allen. Many felt Conan upstaged Debbie with his antics.

The Prince and Princess of NYC

The royals are taking a bite out of the Big Apple. On Sept. 22, Prince Harry and Duchess Meghan touched down in New York City ahead of their appearance at Global Citizen Live. The following day, the couple — both in black — visited One World Observatory and the 9/11 Memorial and mingled with state and local politicians including New York City Mayor Bill de Blasio and New York Governor Kathy Hochul. It's the couple's first public outing since the birth of their daughter, Lili, in June, and their first major appearance since they moved to America in 2020. Reports revealed that Harry and Meghan were staying in the swanky Carlyle hotel, which was a favorite of the prince's mother, Princess Diana.

William Shatner, who turned 90 in March, is again reaching for the stars. The "Star Trek" alum is slated to go to space on Jeff Bezos's rocket ship, TMZ reported on Sept. 24. Bill, the report states, will be part of the second crew to take a space flight in the New Shepard capsule, which would make him the oldest person to ever be launched into space. The 15-minute civilian flight is set to take place in October and will apparently be filmed for a documentary. The real question: Will he wear his Captain Kirk costume for the flight? 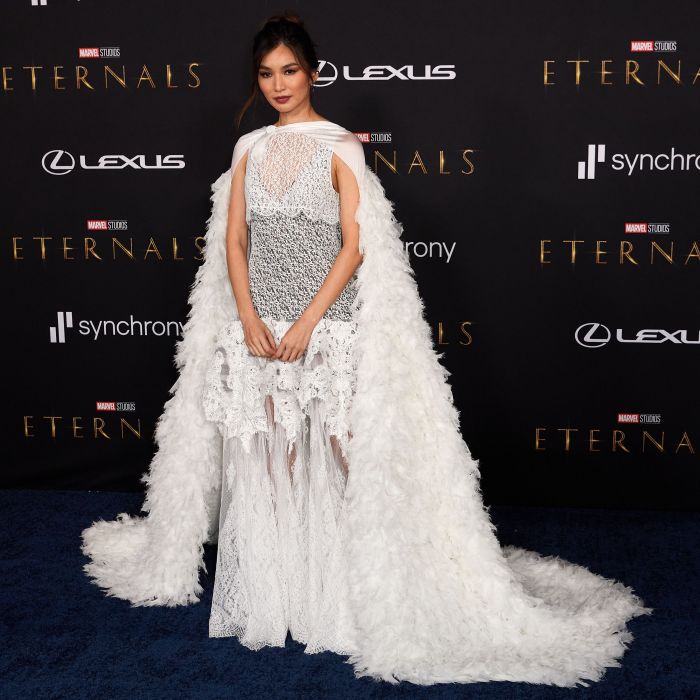