At least they're talking? In the wake of John Cena's multiple professions of love for his now-ex fiancee, Nikki Bella, the two got together for dinner near Nikki's home in San Diego this week. Other diners at the Cowboy Star Restaurant spotted the two and told TMZ the "conversation looked intense during the entire meal." In a photo snapped by TMZ, the two look tense as they share a banquette — while keeping their distance from one another. Having both acknowledged they still love each other since Nikki called off the wedding this past spring, they're now reportedly trying to see if their relationship can be saved.

Though it's led to some issues between them, Jada Pinkett Smith and Will Smith have long heralded their unorthodox approach to parenting. Their freedom-focused mom and dad style may have led to their son, Jaden Smith, moving out of the house at 15, but it also likely inspired the kind of relationship where the teenager felt comfortable telling his mom when he was no longer a virgin. Jada stopped by "Megyn Kelly Today," this week, where she told the host she noticed something was different about her son because he had a "certain swag" going on. "He was walking different, and there was just a loss of this … my little boy was gone," she said, according to Page Six. "And I looked at him and I was like, 'Where have you been? What's been going on?' And he said, 'You know, I was just with a friend.'" I said, 'Oh, OK, anything you want to tell me?' And right away [he told me] — Jaden can't lie."

Sandra Bullock snuggles up to Bryan Randall at 'Ocean's 8' premiere

The cast members of "Ocean's 8" weren't the only stars at the film's London premiere on Thursday, June 13. Sandra Bullock's boyfriend, Bryan Randall, made a rare appearance with his lady at both the screening and afterparty. Clad in Poiret, Sandra looked happy as ever, snuggling up to her man as the two left the post-premiere bash. Looking even … um … happier? The very excited fan who photobombed the couple as paps snapped shots of the two. Sandra and Bryan started dating back in 2015, having met when she hired him to photograph her son, Louis. Rumors the two were planning a secret wedding followed, but the pair have carefully maintained their privacy when it comes their status. The all-female Met Gala heist-driven "Ocean's 8," meanwhile, raked in $41.5 million domestically last weekend, according to ET.

Pete Davidson's exes may have been a bit stunned by the news he's engaged to Ariana Grande after just a few weeks of dating, but at least Ariana's other main squeeze is taking it all in stride. Camila Cabello, who often jokes with Ariana that the two are so close they're essentially married. When the engagement news broke earlier this week, Ariana alerted her faux "wife" on Twitter. "We need to talk @camila_cabello," she posted (via JustJared). Camila, it seems, knew what was up. "😭😭😭😭KEEP THE RING," the singer replied, pretending to be broken-hearted, "IM TAKING THE CANNOLIS (who's keeping the dogs tho?)," she asked. "THE CANNOLIS !!!!!!!!! U keep the kids I'LL be keeping the cannolis @camila_cabello thank you," Ariana quipped in response. Said Camila: "See u in court ……" Guess that's that.

It was family night for Leonardo DiCaprio's girlfriend, Camila Morrone, and Camila's mom, Lucila Sola, at the Greek eatery Avra in Beverly Hills on Thursday, June 13, when the two stepped out for dinner with their significant others. Lucila, 42, has been dating Leo's 78-year-old pal, Al Pacino, for nearly a decade, while Leo, who is just one year older than Lucila, has reportedly been dating Lucila's 20-year-old daughter, Camila, since December. Age-based math problems aside, the group looked happy as they chatted and laughed with other members of Lucila and Camila's family, according to the Daily Mail. Leo and Al are both slated to appear in Quentin Tarantino's controversial new film, "Once Upon A Time In Hollywood," which tells the story of Sharon Tate's murder and the other Manson family killings from the perspective of an actor who lived next door to the pregnant star when she was killed in 1969. Though he and Camila have made a handful of public appearances together including a Coachella date, Leo kept his face mostly obscured throughout the evening courtesy of a baseball hat and hoodie.

Few celebrity splits have ended up more happily than that of Hugh Grant and Elizabeth Hurley. After dating for 13 years, the two remained very close friends when they called it quits, with Elizabeth even naming her ex the godfather of her son, Damian. These days, Liz often seems to be Hugh's press liaison, having revealed he and Anna Eberstein welcomed their third child (and Hugh's fifth) earlier this year. Hugh and Anna tied the knot at the end of May, a tidbit that wasn't lost on Harper's Bazaar when the magazine sat down with Liz to talk fashion for its new issue. Asked how her pal Hugh is doing now that he's a married man for the first time at 57, Liz said all is well. "He seems very, very happy," she gushed (via ET). "He has three children with his wife Anna, who is adorable, and he's a very happy man." Hugh and Anna reportedly said "I do" in London on May 25.

Alicia Keys is launching an initiative for female advancement in music

Alicia Keys was honored with an Icon Songwriter award by the National Music Publishers Association in New York City this week. She used the opportunity to announce plans to spearhead a campaign to create greater equality for women in music. "I've joined forces with a group of really powerful female executives, songwriters, artists, engineers, producers and publishers to help reshape the industry that we all love by creating real opportunities and a pipeline of talent for other women," she said, according to Page Six. "We're calling our initiative She Is the Music. We want to create a model for change that effects women across all industries. We deserve the utmost respect, and so many of these women across industries are telling our culture that time is up on double standards, and it is it's over for pay inequity and colleagues who are at best disrespectful and at the worst unsafe — so it's over for that." Alicia went on to talk about how the past year has been "powerful" and "empowering" for women, before citing statistics from a recent study that showed how few songwriters, engineers and producers were nominated for Grammy Awards last year. " Our world is 50-50, and it's time for our industry to reflect that," she said. "Songwriters tell our stories, they sing who we are as people," she added, "… don't we all want to hear from all of us?

Just days after Kate Spade's death, her brother David Spade returned to the stage to perform a comedy set. Now, he's made another forward-looking move. People reports the comic donated $100,000 donation to the National Alliance on Mental Illness, which supports those suffering from mental health issues and is working to eradicate the stigma tied with such illnesses. "More people suffer from mental health issues than we may realize but no one should ever feel ashamed to reach out for support," David told the magazine, adding a plug for the availability of the national suicide prevention hotline (800-273-8255) and the NAMI website, which provides detailed information on how to get help. Kate took her own life on June 5. "Kate suffered from depression and anxiety for many years," David said in a statement following her death. "She was actively seeking help and working closely with her doctors to treat her disease, one that takes far too many lives. We were in touch with her the night before and she sounded happy. There was no indication and no warning that she would do this. It was a complete shock. And it clearly wasn't her. There were personal demons she was battling."

Demi Lovato is 'happy' in spite of body shamers

Demi Lovato is all about balance, thanks to her experience battling eating disorders and coming out the other side feeling healthy and strong. When it comes to food, she tells People she knows what happens when she diets, which is why she's opposed to it today. She wants her fans to consider a different, healthier approach to eating, too. "I had been on a really strict, regimented diet for so many years, and it felt like I didn't have a lot of freedom with food," Demi said in a new interview with the mag this week. "It would cause me to overindulge whenever I did get the opportunity, and I just felt like it was an unhealthy behavior. I just thought to myself, why am I doing this? I'd rather live in freedom from any eating disordered behaviors or thoughts, and so I decided to just let myself enjoy certain things without feeling guilt or shame." The singer added that she's been open about her "anti-dieting" stance and has found that for the most part, people are supportive. "It was important to me to share that with my followers because there are so many people in the world who feel pressured by society and the diet culture, and I feel like someone has to speak out and say that you don't have to force yourself to lose weight, or to look a certain way," she says. "The reaction has been great. There are some people who body shame me, and sometimes it's difficult, but I say to myself, am I happy? and that's the most important thing. And I want my fans to be happy too."

Cardi B is in her last month of pregnancy

Sounds like Cardi B's about to pop! The rapper, who's expecting her first child with boyfriend Offset, recently filed documents in a lawsuit related to her album art in which lawyers say she can't sit for a deposition until after Aug. 1. "Cardi B is in her final month of pregnancy and about to give birth," the documents state, according to The Blast. Cardi's been accused of using a male model's back tattoo as the basis for her album cover. She maintains he's just making a money grab. Before she finally confirmed she was pregnant with a baby girl, rumors swirled around the contents of Cardi's belly for months. 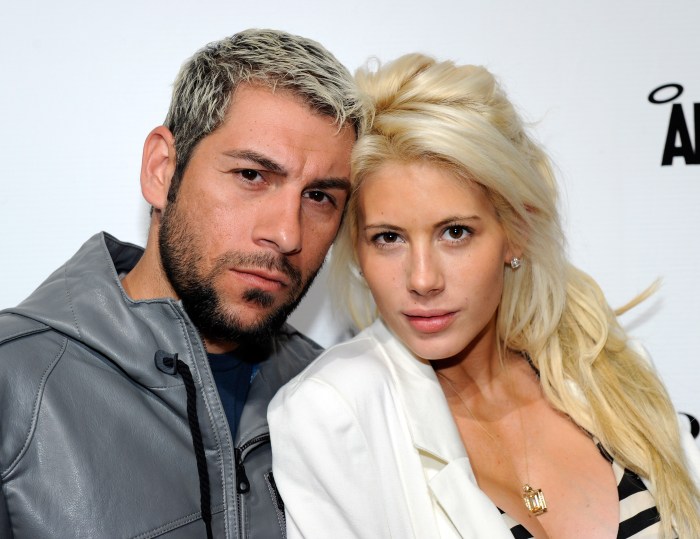