Breakups need not be messy, ugly affairs during which mortal enemies are made. If Hollywood has taught us anything, it's that you can play nice with your exes. Don't believe us? Here are some of your favorite stars who've remained friends with their former lovers, starting with Melanie Griffith and Antonio Banderas. They were married for nearly 20 years, but there's no bad blood between them now that they're divorced. The pair frequently post sweet social media snaps of each other and are often spotted spending family time with their daughter, Stella. "Even if we are divorced, she is my family and I will love her until the day I die," Antonio told People magazine. "We have been in contact all these years and we managed to do a separation that is very elegant."

It's hard enough to see your ex on the street, but what if you had to see them at work every day? It's not a problem for "The Big Bang Theory" stars Kaley Cuoco and Johnny Galecki, who secretly dated from 2008 until 2010. "We knew we weren't destined to be together. We accepted it and said, 'Look, if we ever break up, we will be professional,'" Kaley told CBS! Watch magazine in 2010. "I'm so lucky it was a mutual ending and that we don't hate each other. We've seen that happen on other shows." Johnny echoed those same sentiments, telling CBS Watch!, "We're dear friends, still. Kaley's not just an ex, she's a part of my life." Johnny was even a guest at both of Kaley's weddings in 2013 and 2018!

Busy Philipps and Colin Hanks were once college sweethearts. The pair met on the campus of Loyola Marymount University in the '90s and began dating. Their romance didn't work out but "we are very, very close friends now — his wife and I are tight, he and my husband hang out. We go on vacation together," Busy shared while guest hosting "Live with Kelly" in 2017. In fact, Busy teased Colin about their friendship on Twitter, tagging him in a tweet from InStyle about an alleged scientific study that shows exes who want to be friends could be crazy. "If your ex wants to be friends with you, science says they might be a psychopath," the InStyle tweet read. Busy added three shrug emojis to the tweet, showing how she felt about the study!

Chris Martin and Gwyneth Paltrow "consciously uncoupled" in 2014 and today, they are the poster children for happy co-parenting. The twosome continue to support each other (Gwyneth even lent her vocals to a post-split Coldplay album) and spend quality time together with their children, Apple and Moses. The A-list actress has even shouted out the singer's birthday on Instagram, referring to Chris as "my brother." Doesn't get any friendlier than that!

Kate Beckinsale and Michael Sheen are as close as a couple of exes can possibly be. The two separated in 2003 after eight years together but are still besties today. In fact, Kate gave Michael a friendly kiss at a 2016 Directors Guild of America event and even gave his then-girlfriend Sarah Silverman a big hug. "I love her. I love her. I love her," the actress said at the time. "I am so glad Michael found her so I don't have to spend the rest of my life looking for her!" How many of us could do that? Michael was even on hand when Kate celebrated her 45th birthday in 2018 with their daughter, Lily, and goat yoga!

The world was stunned when Ben Affleck and Jennifer Garner split in 2015 after 10 years of marriage and three children, but the pair soon made it clear they'd mastered the art of maintaining a friendly relationship. The A-list actors are often both spotted out together with kids Violet, Seraphina and Samuel and have spent holidays and vacations together post-split. "We're good friends and we're doing our best, and our kids are fabulous and we're working our best for them," Ben told talk-show host Ellen DeGeneres in 2017. "And what else are you gonna do?" Jen went above and beyond for Ben in August 2018, staging an intervention and taking him to rehab after he fell off the wagon again.

Emma Stone and Andrew Garfield might have broken up in 2015 after five years of dating, but the pair are still close friends. They've shown nothing but love, support and respect for each other since their split and have even gushed about their friendship. In fact, Andrew even referred to himself as Emma's "biggest fan." "I'm nothing but supportive and her biggest fan," Andrew revealed in 2017.

When they were married, Sean Penn and Madonna were known as the "Poison Penns" because they were always fighting. But apparently, their 1989 divorce did wonders for their friendship, as the former couple has "maintained a great friendship over the years," Sean told the Associated Press in 2013. In fact, they're quite supportive of one another: Madonna even performed at Sean's Help Haiti Home gala benefiting his J/P Haitian Relief Organization in 2016.

Drew Barrymore and Justin Long dated on and off from 2007 to 2010 but reportedly continued their friendship through Drew's marriage to (and divorce from) Will Kopelman. Today, they're still close — in September 2018, a report claimed they were spotted hanging out together in New York City, prompting speculation that they might even be getting back together…

Before Blake Shelton, before Gavin Rossdale, No Doubt bassist Tony Kanal was the No. 1 musician in Gwen Stefani's life. The bandmates began dating in 1987 and split while working on "Tragic Kingdom" in 1994. Gwen channeled her breakup angst into her lyrics and she and Tony remained friends. Gwen herself acknowledged the positive state of their relationship when she wrote "Cool" about Tony for her debut solo album.

Lenny Kravitz and Lisa Bonet are as tight today as they were in the '80s. The bohemian pair not only support their daughter, actress Zoe Kravitz, but also support one another. "I didn't want to pass on those heirlooms and this fresh wound of a divorce… I think there are probably times when these thresholds can either sink you or you can see who you are and rise and dust yourself off," Lisa has said about their divorce. She added that today, the two are "fantastic. It's full-on family love."

Jennifer Lopez might be head-over-heels for retired MLB player Alex Rodriguez these days but that hasn't stopped her from maintaining a close relationship with former husband Marc Anthony. The exes, who wed in 2004 and split in 2011, are constantly supporting one another. They've dueted together at numerous events, including the 2016 Latin Grammys (where they even shared a kiss on stage!), and have spent time together with their twins, Max and Emme — even when A-Rod is around!

Mariah Carey and Nick Cannon are so close, you can hardly tell they are exes. The couple, who separated in 2014, are 100 percent about their kids. The spend holidays together and are often spotted enjoying each other's company. Most recently, they hit the 2018 Nickelodeon Kids' Choice Awards together, walking the carpet and sitting inside with twins Moroccan and Monroe.

Sarah Silverman and Jimmy Kimmel parted ways in 2009 after many years of on-and-off dating, but the two are still good friends. In fact, the comedians are so close that when Sarah appeared on "Jimmy Kimmel Live!" in September 2018, she joked with Jimmy about marrying his second wife, writer Molly McNearney. "It's not fair! She gets, like, new, woke Jimmy. I had 'Man Show' Jimmy," she teased.

While Angelina Jolie and Jonny Lee Miller were only married for about a year in the mid-'90s, they've remained good friends since then. She even took him to the Golden Globes after they'd separated and they've worked together on charity endeavors, including Peace One Day. Of their relationship, Angie has said, "It comes down to timing. I think he's the greatest husband a girl could ask for. I'll always love him. We were simply too young."

It speaks volumes about Demi Lovato that she quickly forgave ex Joe Jonas, whom she dated in 2010, for painting a less-than-attractive picture of her in his December 2013 tell-all in New York magazine. (In the article, Joe dished about Demi's breakdown and said that she and Miley Cyrus pressured him to smoke pot.) "People can see how good of friends we are because even when he does stupid stuff — because that's what Joe does," Demi told Wonderwall, "we'll still be best friends."

Miranda Kerr and Orlando Bloom were married in 2010 and separated in 2013. "We still love and care for each other deeply," Miranda told the Daily Mirror in December 2013. "It was important for us to preserve our friendship and the dynamic of being loving parents to [our son] Flynn, so we dealt with everything honestly." Since they split, they've been seen around town together and Orlando even supported Miranda's marriage to Snapchat CEO Evan Spiegel in 2017. But being friends with an ex isn't something new to Orly: He's still on good terms with Kate Bosworth, whom he dated from 2002 to 2006.

Ashlee Simpson and Pete Wentz dated for two years before getting married in 2008. The pair filed for divorce in 2011 but it's been smooth sailing ever since. Pete's been spotted out with the Simpson clan on a number of occasions and has nothing but glowing things to say about his ex. "Ashlee's been my best friend for five years. She's the mother of my child," he told Ryan Seacrest in 2011. "I have nothing but love and respect for her."

Courteney Cox and David Arquette married in 1999 and divorced in 2013. The two have since maintained a close friendship as they've co-parented daughter Coco. "She's my best friend," David told Us Weekly. "We have 15 years together of love and friendship. We're in a better place right now."

Kate Hudson and Chris Robinson were married from 2000 to 2006 but maintained a close friendship after their divorce. They're super-devoted parents to son Ryder and were more than happy to come together to create a happy family environment for him even as both moved on with new romantic partners. 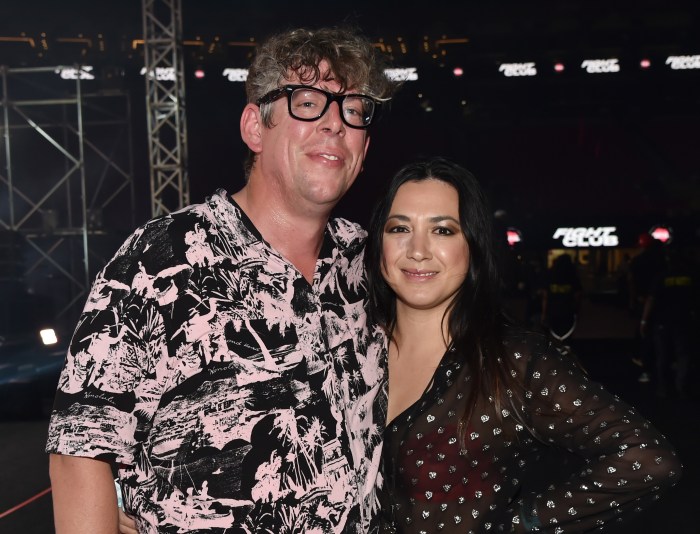