It's been 35 years since Bruce Springsteen's seventh studio album — the 15x Platinum "Born in the U.S.A." — debuted on June 4, 1984. To mark the occasion, Wonderwall.com is taking a look back at The Boss's life in pictures. Keep reading to relive his greatest moments caught on camera…

Bruce Frederick Joseph Springsteen was born in Long Branch, New Jersey, on Sept. 23, 1949. He spent most of his teen years honing his craft and played with several bands during his early 20s before Clive Davis signed him to Columbia Records in 1972. The following year, he released his debut studio album, "Greetings from Asbury Park, N.J." Bruce (pictured at a gig circa 1973) released his sophomore album, "The Wild, the Innocent & the E Street Shuffle," less than a year later, in November 1973. Both albums earned critical praise but failed to achieve mainstream success.

Bruce Springsteen finally achieved mainstream success with his third studio album, "Born to Run," which debuted in August 1975. That same month, he played a multi-night residency at The Bottom Line club in New York City (pictured), parts of which were broadcast live on the radio.

Bruce Springsteen reportedly romanced model-dancer Karen Darvin (pictured with the rocker circa 1975) from 1975 to 1977. She went on to have two sons with another rocker: Todd Rundgren.

On June 27, 1984, Bruce Springsteen pulled a young Courteney Cox up onstage to dance with him while shooting his "Dancing in the Dark" music video at the St. Paul Civic Center in Minneapolis, Minnesota. The song is the biggest hit from his seventh studio album, 1984's "Born in the U.S.A.," which earned a Grammy nomination for album of the year. As for "Dancing in the Dark," the hit single helped The Boss win his first Grammy: best male rock vocal performance. (It also scored a nomination for record of the year.)

In an undated photo, Bruce Springsteen is depicted lifting actress Julianne Phillips, whom he reportedly met during his mid-'80s "Born in the U.S.A." tour, during a concert. The duo tied the knot in 1985.

Julianne Phillips accompanied then-husband Bruce Springsteen to the Third Annual Rock and Roll Hall of Fame Awards in 1988. Later that year, they called it quits when The Boss realized he was in love with another woman: bandmate Patti Scialfa. He and Julianne officially divorced in early 1989.

Bruce Springsteen performed in East Berlin on July 19, 1988. The Communist government's youth wing, the Free German Youth, organized the concert as part of a plan to pacify the increasingly restless and dissatisfied population, but the show did just the opposite, stoking a spirit of rebellion that led to the fall of the Berlin Wall just 16 months later.

Bruce Springsteen and Patti Scialfa — who welcomed their first child together, son Evan, on July 25, 1990 — stepped out in New York City in 1991, the same year they tied the knot and welcomed daughter Jessica. The duo added to their brood again with another son, Sam, on Jan. 5, 1994. During this time, The Boss stepped away from the spotlight to quietly raise his family in New Jersey.

Bruce Springsteen picked up an Oscar for best original song for "Streets of Philadelphia" from the movie "Philadelphia" during the 1994 Academy Awards. He also took home a Golden Globe for the track. But that's not all…

Bruce Springsteen took home four Grammys for "Streets of Philadelphia" during the 37th Annual Grammy Awards at the Shrine Auditorium in Los Angeles on March 1, 1995. Since then, he's racked up an impressive collection of Grammys: He now has 20 to his name.

In 1996, Bruce Springsteen earned his second Oscar nomination: best original song for "Dead Man Walking" from the film of the same name, which he performed during the 68th Annual Academy Awards in Los Angeles on March 25. (Ultimately, he lost to "Colors of the Wind" from "Pocahontas.")

Bruce Springsteen was all smiles while being inducted into the Rock and Roll Hall of Fame in New York City on March, 15, 1999. The same year, he and the E Street Band, which took a hiatus for about a decade, hit the road on their Reunion Tour, which included multi-night stops in East Rutherford, New Jersey, and New York City. He was also inducted into the Songwriters Hall of Fame in 1999.

Bruce Springsteen stepped out with his three kids — daughter Jessica and sons Evan and Sam — in New York City on Feb. 18, 2002. Jessica is now a competitive horseback rider, while Evan is a musician and Sam is a firefighter.

Bruce Springsteen and Tom Hanks took a boat ride while vacationing in St. Barts with friends and family on Feb. 2, 2007. The duo's friendship goes back to their collaboration on 1993's "Philadelphia."

Bruce Springsteen's older son, Evan, joined him onstage during a concert at Camp Nou in Spain on July 20, 2008.

Though Bruce Springsteen has always been political, it wasn't until Barack Obama's 2008 presidential campaign that he truly endorsed a politician for the first time. The Boss attended and performed at several of Obama's rallies, including one at the Cleveland Mall in Ohio on Nov. 2, during which his younger son, Sam, shook hands with the future president.

Bruce Springsteen and Beyonce were among the performers at the concert preceding President Obama's inauguration, We Are One: The Obama Inaugural Celebration at the Lincoln Memorial, in Washington, D.C., on Jan. 18, 2009.

Bruce Springsteen picked up his second Golden Globe (best original song for "The Wrestler" from the drama of the same name) during the 66th Annual Golden Globe Awards at the Beverly Hilton hotel in Beverly Hills on Jan. 22, 2009. He posed with the star of the movie, Mickey Rourke, who took home the Globe for best actor in a dramatic film.

Bruce Springsteen and Robert De Niro were among the individuals feted by President Obama during a reception for Kennedy Center Honorees in the East Room of the White House in Washington, D.C., on Dec. 6, 2009.

Bruce Springsteen attended the Rome Film Festival premiere of "The Promise: The Making of Darkness on the Edge of Town" (one of several documentaries about his life and work) on Nov. 1, 2010. The documentary, which he executive produced, chronicles the trouble The Boss encountered (contract drama and a fierce legal battle with a former manager) while recording his fourth studio album in 1977 and 1978.

Bruce Springsteen and wife Patti Scialfa supported daughter Jessica, an avid equestrian, at the Royal Windsor Horse Show near Windsor Castle in Berkshire, England, on May 15, 2011. Jessica, who reportedly has Olympic ambitions, grew up riding horses on the family's horse farm at their home in Colts Neck, New Jersey.

Bruce Springsteen was honored as the MusiCares Person of the Year at the Los Angeles Convention Center on Feb. 8, 2013. He was joined at the ceremony by the most important women in his life: daughter Jessica Springsteen, wife Patti Scialfa, mom Adele Springsteen and Pamela Springsteen, one of his two younger sisters.

Bruce Springsteen showed off his bod while getting his feet wet at Ipanema Beach in Rio de Janeiro on Sept. 20, 2013.

Bruce Springsteen released his 18th and most recent studio album, "High Hopes," on Jan. 14, 2014. Four days later, he proved he's still got it during a concert for the Light of Day Foundation — a charity dedicated to raising funds to fight Parkinson's disease, PSP and ALS that takes its name from a Springsteen song — at the Paramount Theater in Asbury Park, New Jersey. The concert location is also near and dear to The Boss's heart: The rocker has advocated for the revitalization of the city as a cultural hub since it experienced a decline in the late 20th century.

In late 2014, Bruce Springsteen made his acting debut as undertaker and mafia hitman Giuseppe Tagliano — the brother of his E Street Band collaborator Steven Van Zandt's character — on the series finale of the Netflix crime-dramedy "Lilyhammer." (Steven starred on all three seasons of the show, which he also wrote, directed and executive produced.) The duo were photographed together on set in New York City on Sept. 4, 2014.

Bruce Springsteen's autobiography, "Born to Run," hit bookshelves on Sept. 27, 2016. The following day, The Boss attended a fan signing at a Barnes & Noble in New York City. (He earned his 50th Grammy nomination in 2018 for best spoken word album for the corresponding book-on-tape.)

President Obama awarded Bruce Springsteen the Presidential Medal of Freedom during a ceremony in the East Room of the White House in Washington, D.C., on Nov. 22, 2016.

Bruce Springsteen made his Broadway debut in "Springsteen on Broadway" in October 2017. He and wife Patti Scialfa, who performs alongside him on most nights of the production, took a bow at the conclusion of the Oct. 12 performance at the Walter Kerr Theatre in New York City.

On June 10, 2018, Bruce Springsteen received a special award for "Springsteen on Broadway" during the Tony Awards in New York City. He was joined on the red carpet by his family: wife Patti Scialfa and their kids — Evan, Jessica and Sam.

Bruce Springsteen showed no signs of slowing down while performing during the 12th Annual Stand Up For Heroes benefit concert at the Hulu Theater at Madison Square Garden in New York City on Nov. 5, 2018. The iconic rocker turns 70 in 2019!

On May 5, 2019, Bruce Springsteen and legendary director Martin Scorsese teamed up for a conversation about the rocker's Netflix special, "Springsteen on Broadway," as part of the streamer's FYSee series — which targets Emmy voters — at Raleigh Studios in Los Angeles. (He'll find out in July 2019 if the special scored any Emmy nominations.)

Reunited and it feels so good! Bruce Springsteen joined E Street Band collaborator Steven Van Zandt on stage during the Little Steven and The Disciples of Soul concert at the Paramount Theatre in Asbury Park, New Jersey, on May 8, 2019. 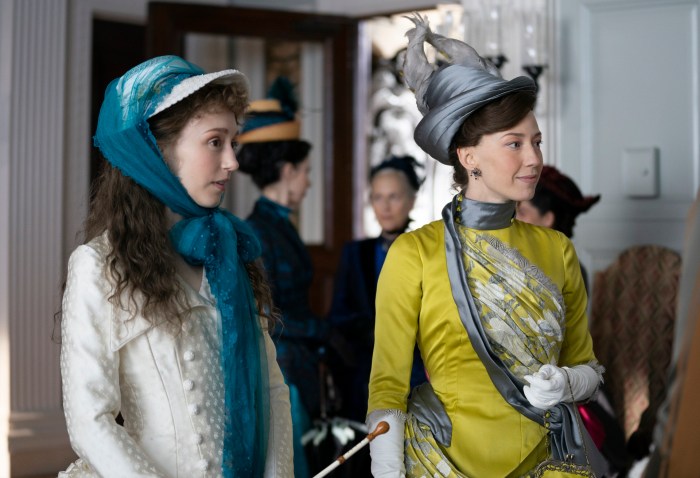