More is better! Well, at least in regards to children, right? Wonderwall.com is looking at celebs who had more than one reason to be happy in the delivery room, starting with the Clooneys! Back in February 2017, George Clooney and Amal Clooney's pal Julie Chen broke the news on "The Talk" that they superstar couple is expecting twins, a boy and a girl. "Beyoncé is not the only superstar expecting twins," she said on the daytime program. "Congratulations are in order for George and Amal Clooney!" Julie was right! The happy couple welcomed a boy and a girl, Alexander and Ella, into the world on June 6, 2017. Keep clicking to find out who else is parents to twins or even triplets!

Beyonce and Jay Z welcomed twins in Los Angeles, reportedly on June 12, 2017. The couple kept the news under wraps for nearly a week. On Feb. 1, Bey announced on her Instagram page that she was expecting twins. "We would like to share our love and happiness. We have been blessed two times over," she wrote. "We are incredibly grateful that our family will be growing by two, and we thank you for your well wishes. – The Carters."

Three's company for Pharrell Williams and his wife Helen Lasichanh! The duo welcomed triplets in January 2017, adding to their family that includes son Rocket. His rep confirmed the news. "Pharrell, Helen and Rocket Williams have welcomed triplets. The family is happy and healthy!" his rep said.

La vida loca, indeed! Things got crazier (and better) for Ricky Martin when he welcomed twin sons Matteo and Valentino via surrogate in August 2008. The boys not only made the superstar a dad, but they also inspired him to be true to himself and come out of the closet in March 2010.

Madonna adopted twin girls from an orphanage in Malawi in early February 2017. "I can officially confirm I have completed the process of adopting twin sisters from Malawi and am overjoyed that they are now part of our family," Madge shared on Instagram. Twin daughters Estere and Stelle, 4, are the third and fourth children Madonna's adopted from the African nation. Son David Banda joined the pop star's family in 2006 and daughter Mercy James arrived in 2009. Madonna is also a mother to biological kids Lourdes Leon and Rocco Ritchie.

"Modern Family" star Julie Bowen and her husband, Scott Phillips, were in for a big surprise when they found out the actress was pregnant, again. "I did not want twins as a second go-around. I should have been much more cautious. I should have had . . . half sex?" says Julie in an interview with More magazine. John and Gustav were born on May 8, 2009.

J.Lo and Marc Anthony's adorable twins, Max and Emme, born on Feb. 22, 2008, are growing up so fast! Ellen DeGeneres recently asked Jennifer if they're showing signs of musical talent. The singer/actress/dancer laughingly replied, "Emme loves to dance. She loves to perform … I think Emme has a bit of a voice … [Max] has a big personality, he's got my personality."

After spending a month of bed rest in a Los Angeles hospital, Julia Roberts gave birth to her precious twins, Phinnaeus and Hazel, just in time for Thanksgiving in 2004. Looks as if Julia and her husband, Danny Moder, had a lot to be thankful for that year!

Nick Cannon predicted the birth of his cute twinsies, Moroccan and Monroe, on his and then-wife Mariah Carey's third anniversary on April 30, 2011. Things didn't work out for the couple, but their two little ones continue to bring joy to their lives.

With a brood as large as the Jolie-Pitt clan, you'd think it would be difficult to come up with names for their babies. To our surprise, that's not the case. Angie and Brad are inspired by locales and family names when deciding on monikers for their fraternal twins Knox Léon and Vivienne Marcheline, born July 12, 2008. Knox was named after Brad's grandfather, whereas Vivienne was named in honor of Angie's late mother. The twins stay together even if the parents don't.

Proud dads Neil Patrick Harris and David Burtka said that meeting their twins Gideon and Harper for the first time was "an absolute joy." The couple each fathered one of the twins, borng Oct. 12, 2010, who were both delivered via surrogate. "I just love the way they smell," Harris joked to People. "And we can use them as an excuse to get out of almost anything."

After massive speculation over the identity of Sarah Jessica Parker's surrogate, two beautiful twin girls, Marion and Tabitha, were born in 2009. The names of both girls were inspired by members of Sarah's family tree. We wonder if father Matthew Broderick felt a little left out on the baby naming.

Diddy added two more to his hip-hop dynasty when his longtime ex-girlfriend, Kim Porter, introduced twins D'Lila and Jessie to the world in 2006. With a total of five kids, Diddy has the perfect number of little ones to launch the next big music group.

Twin sisters Dolly Rebecca Rose and Charlie Tamara Tulip, born Dec. 28, 2008, share the same exact birth date and time — a rarity among twins — but it may be the only thing the girls have in common. "One is outgoing and one is shy," says doting dad Jerry O'Connell. Proud mom Rebecca Romijn adds, "One is a little wilder and more of a daredevil, and the other is more careful."

When Marcia Cross was bedridden due to her pregnancy with twins Eden and Savannah, "Desperate Housewives" moved production into Marcia's bedroom! The show's creator, Marc Cherry, told People magazine that the actress was "bored out of her mind [in bed], so she said, 'Bring the camera here — I want to act." That's dedication.

Celine Dion and late husband René Angélil put a lot of thought into naming their little twin sons, who were born Oct. 23, 2010. Eddy was inspired by music producer Eddy Marnay, who acted as a father figure to the singer and also produced Celine's first five records. Nelson was named in honor of Nelson Mandela, whom Celine met while on tour in South Africa. One thing is for certain — these two tykes inherited some pretty inspirational names.

Tragedy was avoided when Dennis Quaid and wife Kimberly Buffington's surrogate gave birth to their twins Thomas and Zoe in November 2007. The newborns were accidentally given 1,000 times the common dosage of an anti-coagulant shortly after they were born. Thankfully for the new parents, their babies fought for their little lives and are now healthy, lively tots.

Famous for his "mobster" roles, Oscar-winning actor Al Pacino welcomed twins Anton James and Olivia Rose with ex-girlfriend Beverly D'Angelo in 2001. Could a little faux mob family be in the making?

After 16 years of on-and-off dating, rocker Mark McGrath and aesthetician Carin Kingsland got engaged on New Year's Eve in 2009. Shortly after, the lovebirds announced Carin was pregnant with twins, and she gave birth to Lydon and Hartley on April 29, 2010.

"Life as a bustling family of six is 'chaotic bliss,'" says Presley of her adorable twins, Harper and Finely, with guitarist husband, Michael Lockwood. Lisa and her hubbie also share parenting duties with her daughter Riley and son Benjamin from a previous marriage.

MTV's "Teen Mom 2" star Leah Messer and first husband Corey Simms — yes! We just said "first husband" — shared with the world the birth of their sweet little twin daughters, Aliannah and Aleeah, on the hit show. But by the time her daughters were old enough to walk, this teen mom divorced Corey, got engaged and married new beau Jeremy Calvert in a quickie courthouse wedding. And to our surprise, she's one of the most stable of the "Teen Moms." 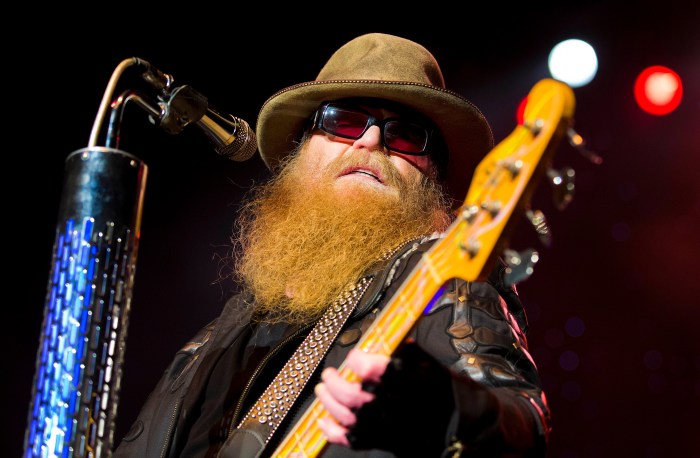