Lizzo wears a Lizzo shirt outside Catch restaurant in West Hollywood on Aug. 20, 2021.

Sean Penn and Dylan Penn head to a taping of "The Late Show With Stephen Colbert" in New York City on Aug. 19, 2021.

Face shield on and heels in hand, Tracee Ellis Ross waves at fans before taping "Jimmy Kimmel Live!" in Hollywood on Aug. 19, 2021.

Katie Holmes keeps a low profile while out for a morning walk in New York City on Aug. 20, 2021.

Ben Affleck and his kids — Violet Affleck, Samuel Affleck and Seraphina Affleck — step out in Los Angeles on Aug. 18, 2021.

Diddy and Usher share a laugh during an event produced by MADE nightlife at The Highlight Room in Los Angeles on Aug. 18, 2021.

Keke Palmer waves as she arrives at the "Jimmy Kimmel Live!" studios in Hollywood on Aug. 18, 2021.

Usher shows off his chest while leaving The Highlight Room in Los Angeles on Aug. 19, 2021.

Marion Cotillard attends a special screening of "Annette" at the Hollywood Forever Cemetery in Los Angeles on Aug. 18, 2021.

Jack Harlow closes out Sprite's Live From the Label virtual concert series at The Masquerade in Atlanta on Aug. 18, 2021.

Paris Hilton poses before a taping of "The Tonight Show Starring Jimmy Fallon" in New York City on Aug. 17, 2021.

Sofia Vergara attends the live taping of "America's Got Talent" at the Dolby Theatre in Hollywood on Aug. 17, 2021.

Aaron Paul attends the premiere of "Reminiscence" in Los Angeles on Aug. 17, 2021.

After promoting her new film "Respect," Jennifer Hudson leaves a taping of "Late Night with Seth Meyers" in New York City on Aug. 17, 2021.

Heidi Klum attends the live taping of "America's Got Talent" at the Dolby Theatre in Hollywood on Aug. 17, 2021.

Liam Gallagher performs for health care workers at the O2 Arena in London on Aug. 18, 2021.

Jennifer Lopez leaves dinner after an evening out in Los Angeles on Aug. 17, 2021.

Brooklyn Beckham and his fiancée, Nicola Peltz, leave The Nice Guy in Los Angeles on Aug. 18, 2021.

A faux-furry Justin Bieber leaves a birthday party in Los Angeles in the early hours of Aug. 17, 2021.

Awkwafina attends the premiere of "Shang-Chi and the Legend of the Ten Rings" in Hollywood on Aug. 16, 2021.

Simon Cowell enjoys a solo bike ride along the Malibu coast in California on Aug. 16, 2021.

Jhené Aiko attends the premiere of "Shang-Chi and the Legend of the Ten Rings" in Hollywood on Aug. 16, 2021.

Anne Hathaway and Jared Leto shoot "WeCrashed" at The Shores at Atlantic Beach in New York City on Aug. 16, 2021.

Simu Liu attends the premiere of "Shang-Chi and the Legend of the Ten Rings" in Hollywood on Aug. 16, 2021.

Rihanna is all dressed up for a late-night shopping trip at Whole Foods in New York City's Tribeca neighborhood on Aug. 15, 2021.

On his 49th birthday — Aug. 15, 2021 — Ben Affleck steps out with his kids including eldest daughter Violet to visit a family friend in Los Angeles.

"The Real Housewives of Atlanta" alum Phaedra Parks brings sons Ayden Nida and Dylan Nida to a special Atlanta screening of "PAW Patrol: The Movie" that she hosted at the Regal Atlantic Station on Aug. 15, 2021.

Britain's Prince Charles — who's known as the Duke of Rothesay when in Scotland — enjoys a dram of whisky during a visit to the Grampian Highland Games Gathering at The Princess Royal and Duke of Fife Memorial Park in Braemar, Grampian, Scotland, on Aug. 14, 2021.

Billie Joe Armstrong of Green Day performs during the Hella Mega Tour at Wrigley Field in Chicago on Aug. 15, 2021.

A suited up Alex Rodriguez carries a coffee through the streets of New York City on Aug. 15, 2021.

Wells Adams celebrates the new season of ABC's "Bachelor in Paradise" with Heineken in Mexico on Aug. 16, 2021.

Courtesy of MADE nightlife 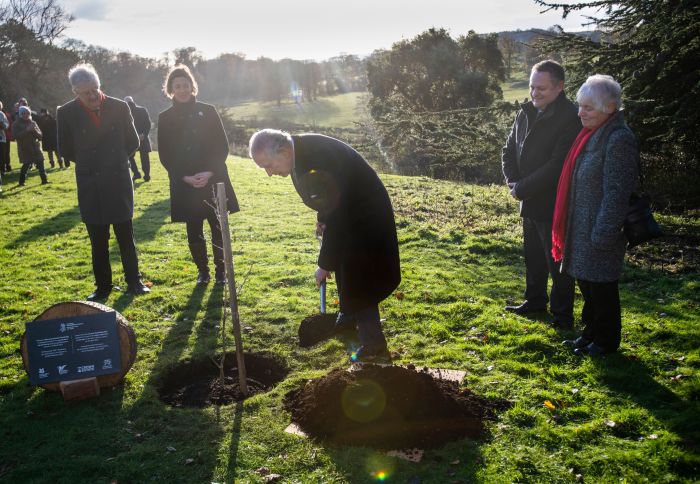