2016 was a year dominated by celebrity children! Many offspring of famous faces basked in the spotlight this year and forged new careers in Hollywood. First up is a set of sisters — Sylvester Stallone and Jennifer Flavin's daughters (from left) Sistine Rose Stallone, 18; Scarlet Rose Stallone, 14; and Sophia Rose Stallone, 20. In November, all three were named Miss Golden Globe 2017, making history as they became the first set of siblings appointed to the prestigious role. After the announcement was made, the young ladies released a statement: "We're thrilled to not only be part of the Golden Globe tradition, but to be making history as the first set of siblings ever chosen for the title and duties. We are proud to be part of the HFPA family, an organization that multiple times has recognized our father's work in film." Keep reading to see the other celeb offspring who've made headlines this year!

Kaia Gerber is one of the biggest up-and-coming models of the moment. The daughter of Cindy Crawford and Rande Gerber has been lining up endorsements and already graced the cover of French Vogue (with her mom) in April. The 15-year-old was named Breakthrough Model of the Year at the Daily Front Row Fashion Media Awards in September and has already amassed some pretty famous friends. (She even attended supermodel pal Kendall Jenner's 21st birthday bash in November — though her mom chaperoned.)

Brooklyn Beckham had quite a year in 2016. The eldest son of David Beckham and Victoria Beckham went public with his first high-profile relationship in May, taking to social media to show his affection for then-girlfriend Chloe Grace Moretz. Unfortunately for Brooklyn and Chloe, things were over just a few months later as news of their split made headlines in September. Brooklyn has also cultivated a major following on Instagram, where he shows off his excellent photography skills. He's also a staple in the fashion world, frequently spotted at fashion week presentations around the world with his designer mom.

Lily-Rose Depp was destined for stardom — she is, after all, the daughter of Johnny Depp and Vanessa Paradis. The 17-year-old is already the face of Chanel No. 5 L'eau perfume, but it's her acting career that's really taking off these days. Her film "The Dancer" was screened at the Cannes Film Festival, and she starred alongside Natalie Portman in November's "Planetarium."

Gabriel-Kane Day-Lewis, the 21-year-old son of Daniel Day-Lewis and Isabelle Adjani, is making major waves in the fashion world. In October, he modeled for Dolce & Gabbana alongside other celeb offspring, and he's been a front-row fixture during fashion weeks shows around the world.

Nicole Richie's little sister, Sofia Richie — daughter of Lionel Richie and ex-wife Diana Alexander — has been making headlines all year long. Though the 18-year-old has a few years of modeling under her belt, it was her personal life that landed her in the news throughout 2016. The teen dated Justin Bieber over the summer, and after that fizzled out, she was spotted with two different guys who are also on this list: Brandon Thomas Lee and Brooklyn Beckham.

Jaden Smith has grown up in the spotlight, with his famous folks being Will Smith and Jada Pinkett Smith, but he landed some more mature roles in 2016. In August, the 16-year-old made his debut on Netflix's "The Get Down" as Marcus "Dizzee" Kipling.

Madonna's daughter Lourdes Leon was an active part of the fashion world in 2016. The 20-year-old, whose father is Carlos Leon, made her modeling debut in March when she shot the campaign for Stella McCartney's Pop fragrance and revealed lilac hair. Of her foray into modeling, Lourdes, whose nickname is Lola, told Vogue that the fragrance had a be-true-to-yourself message she identified with, saying, "I go through this struggle myself, [where] women's bodies have been made so public that everyone feels like they need to comment. I love when someone doesn't pretend to be someone they are not." She remained a fixture in the fashion world throughout the rest of the year, attending the Alexander Wang show during New York Fashion Week in September.

Meg Ryan and Dennis Quaid's son Jack Quaid has had acting aspirations for quite a while. With a few films under his belt, Jack landed a major role in 2016 when he was cast as Clark Morelle on HBO's "Vinyl."

All grown up and red carpet ready! Reese Witherspoon and Ryan Phillippe's eldest, Ava Phillippe, walked her first solo red carpet in September while attending the launch of Chanel No. 5 L'eau in Los Angeles. The teen, who turned 17 this year, has a budding interest in fashion. Of her daughter's innate sense of style, Reese told Us Weekly, "She's so much cooler than I am! She's very cutting-edge, and she knows a lot about fashion, and she has her own sense of style, which is amazing."

Like little sister Kaia Gerber, Presley Gerber has followed in his supermodel mom's footsteps this year. Cindy Crawford and Rande Gerber's 17-year-old son made his runway debut in June at a Moschino Resort show in Los Angeles. He walked for Dolce & Gabbana later in the year and even took part in a D&G photoshoot in October with fellow celebrity offspring Gabriel-Kane Day-Lewis, Brandon Thomas Lee and Rafferty Law.

Riley Keough continued to make a name for herself in 2016 with major roles on the small screen and in theaters. The eldest grandchild of Elvis Presley — she's the daughter of Lisa Marie Presley and Danny Keough — starred on the successful Showtime series "The Girlfriend Experience." She also starred alongside Jena Malone in January's "Lovesong" and snagged a role in the buzzy October flick "American Honey."

Connor Cruise, the son of Tom Cruise and Nicole Kidman, tried his hand at acting but later found his true passion. The 21-year-old spent 2016 jet-setting across the world performing as a DJ.

Jude Law's son Rafferty Law is making a name for himself just like his famous father and mother, actress-turned-designer Sadie Frost. The 20-year-old is no stranger to the runway and took part in Dolce & Gabbana's October photoshoot with fellow famous kids. But it's not just modeling that's keeping him in the spotlight. This summer, Rafferty was seen holding hands with Oasis frontman Liam Gallagher's model daughter, Molly Moorish.

Heather Locklear and Richie Sambora's daughter Ava Sambora is ready for her close-up! The 19-year-old made her modeling debut in March working for Malibu-based bikini company Baes and Bikinis.

Pamela Anderson and Tommy Lee's sons have both been making headlines this year. Youngest son Dylan Jagger Lee modeled for Saint Laurent in February and has also set his sights on a music career. The 18-year-old told W Magazine that he'd love to play at Coachella.

Brandon Thomas Lee, Pamela Anderson and Tommy Lee's eldest son, is joining the modeling world like his little brother. He took part in a Dolce & Gabbana photoshoot in October and has been frequenting fashion week presentations worldwide. While at Milan Fashion Week in September, he was spotted with another famous kid on this list — Sofia Richie. But Brandon has aspirations outside of the style realm: The 20-year-old would like to get into acting. He told W Magazine that his career goal in film is "to make art, to make people think, and to do great work with great people." 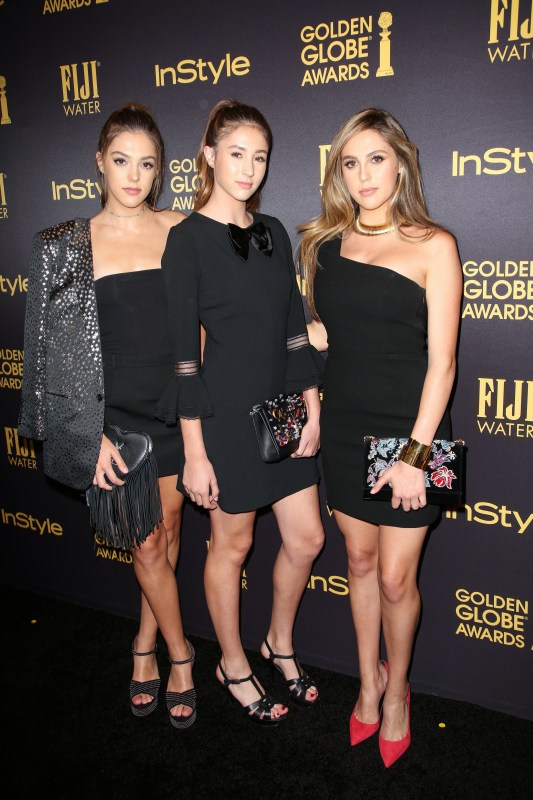 Up Next Kids in the news