So, you think you know Charlie Hunnam? He's full of surprises. To mark the release of his new movie, "King Arthur: Legend of the Sword," on May 12, 2017, Wonderwall.com has rounded up some fun facts and fascinating stories about the English actor. Keep reading for the scoop on things that you might not know (but should) about Charlie…

1. He was expelled from school

You knew he was the lead on "Sons of Anarchy," but did you know that Charlie Hunnam nearly killed one of his teachers? No joke. He was also expelled for it. He recalled the crazy story to ELLE Canada in 2015. "When I was 15, I was banned from going to Florence on an art history trip by a teacher who generally thought I was a 'menace to society,'" he said. One day, the teacher ripped up one of Charlie's art projects and he was livid. "We used to twist old art scissors into throwing stars, and I could hit a bullseye, no problem. So I threw some of these scissors at him, and they landed in the doorframe parallel to his head. And that was it — they expelled me from school."

When Charlie Hunnam is around, watch your merchandise! The actor is known to steal clothing — and more — from the sets of his movies and TV shows. He's actually rather unapologetic about it too. From the "Sons of Anarchy" set, he told "Entertainment Tonight," he took his car and rings. He also stole a 2003 Harley-Davidson Dyna Super Glide. "Yes, I stole the bike. Hell, yeah! It's in my garage," he said. "It was like one of those weird things that, like, a kid does. I stole it, but I've never used it." He said he's increased his personal wardrobe significantly thanks to movie sets. "King Arthur," he said, is the only set he didn't steal from.

Sorry ladies, but Charlie Hunnam is spoken for. He's been dating jewelry designer Morgana McNelis for 12 years. And he's got her back through thick and thin. In 2016, online trolls began posting unflattering and unkind messages about her. Charlie was having none of it. "She is an intelligent, beautiful, kind person who just tried to live a simple life and has nothing to do with the entertainment industry," he said in a statement about his lady. "This is a girl I love very much and have spent the last 11 years of my life with and hope to spend the next 60 years [with]. She has been my loyal and supportive partner long before I had any success or money." He's sexy and loyal? Be still, our hearts.

4. He was drunk when he got his big break

It was Christmas Eve and Charlie Hunnam was drunk. That's when he got his big break. "I always used to do my shopping on Christmas Eve and I would get a little Dutch courage in me beforehand, have a couple drinks," he recalled to Men's Health in 2014. He was trying on sneakers when he noticed a woman staring at him. "So I blew a kiss at her, and she smiled and thought, 'Who's this cheeky little bastard?'" That woman turned out to be the production manager for a teen TV drama called "Byker Grove." "She ended up giving me three episodes," he added.

In 2013, Charlie Hunnam basically quit Los Angeles and bought a place outside the city — a ranch where he lives with girlfriend Morgana McNelis. "We've got 30 chickens and a couple of donkeys, a couple of ducks, and we've got a big, organic garden. We are going to try to live a bit more sustainably," he told Britain's 7 Nights magazine.

Charlie Hunnam is really interested in anything that involves physical fitness or getting his heart rate up. But he's also become a dangerous man. He's been training in Brazilian jiu-jitsu. He told Men's Health that he got hooked on BJJ from watching UFC fights and from wrestling in his backyard. His goal is to earn a black belt in BJJ by the time he's 45.

Charlie Hunnam related to his "Sons of Anarchy" character Jax Teller thanks to his dad, who didn't always do things legally. "My dad's a real hard guy. He made money outside of the law," Charlie told USA Today. "So I was very aware of the outlaw mentality. He was very kind of feared and respected and also loved in equal parts. I mean, he was really a kind of serious guy when he was younger."

8. He took down a home intruder

You break into Charlie Hunnam's house, you'd better be prepared to die. Charlie keeps an actual machete in his home office and he once even used it when a guy broke into his home. Charlie pinned the man to ground and gave him a stern warning about what would happen if he even returned, he told Men's Fitness. Charlie told the guy, "If you ever come near here again, literally, they'll never find your body — I'll cut you in so many pieces." He then let the intruder go.

The documentary "End of the Line" about overfishing really screwed up Charlie Hunnam. "Only check it out if you want to contemplate suicide for 36 hours and then not eat fish for 18 months," he told Men's Health. He now he eats fish again, but feels bad when he does it and has been known to apologize to the fish before eating it. Charlie also hasn't eaten pork in nearly 30 years.

10. He passed on a couple memorable roles

Everyone knows Charlie Hunnam was originally supposed to be in "Fifty Shades of Grey," but did you know he was also supposed to be in "Forgetting Sarah Marshall"? The part of Aldous Snow, multiple outlets have reported, was written with Charlie in mind, but he passed. The character was initially conceived to be somewhat refined. But when Russell Brand got the part, the character was rewritten to celebrate his talents.

There was a stretch of his life when Charlie Hunnam starting making money and decided that footwear was a solid investment — he calls it "poor-boy syndrome." He owned at least 85 pairs of Nike Air Max 90s, he told Men's Health. But he's no longer a sneakerhead. "Now I've soured on the whole thing, and I just feel like a gross, rich, white [guy] with 85 pairs of sneakers unworn. So I went through and picked out the ones that I had serious emotional attachment to, which was only about six or seven pairs. Then I gave a few pairs to buddies, and I'm going to give the rest to charity and be done with this sneaker thing once and for all."

Charlie Hunnam has actually been someone's husband before. He rolled the dice of love in Las Vegas in 1999 and married actress Katharine Towne (it was the first time he'd ever been to Vegas). The marriage lasted "three terrible, painful expensive years," he told the Associated Press in 2017. "We came to Vegas because, in our 18-year-old minds, we thought, 'What if we never see each other again? Let's get married! And then we'll have to see each other again, even if it's just to get divorced!'" he said. "And so we came to Vegas, but I couldn't even get a drink! So I didn't think I was going to actually be able to get married! I thought it was just a lark! But we sort of psyched ourselves into it and then at 2 o'clock in the morning, we ended up getting married."

13. He loves the smell of marijuana — but no longer smokes it

Charlie Hunnam is the face of a fragrance: Calvin Klein Reveal. He counts that as his favorite scent. His second favorite smell is marijuana, or "Eau de Marijuana," as he puts it. In 2015, he told Canada's The Kit, "I don't want to be misunderstood — I don't smoke marijuana personally. I just occasionally walk through a cloud of it, which is common in Los Angeles, and the smell sticks to one's clothing." He did smoke weed often in the past, he admitted, but said he quit years ago. "I was sort of proud at my enormous ability to smoke pot and function," he told Men's Health. "But I realized I didn't want to spend my life stoned."

While getting in shape for "King Arthur," Charlie Hunnam became quite the swordsman. For his fight scenes, he had to learn the choreography not only for his character, but also for everyone else's. Everything was filmed separately to allow the filmmakers to play with the swordplay speeds. "I'd had to put an enormous amount of force into [swinging the sword] and then an equal amount of force to stop it, to play as though there was resistance when there was none, which was incredibly physically demanding to keep doing that over and over and over and over for 12 hours a day," he told People magazine. The bright side: "The fitness level that I achieved during the course of that, I almost felt like I was a professional athlete, on that level," he said. 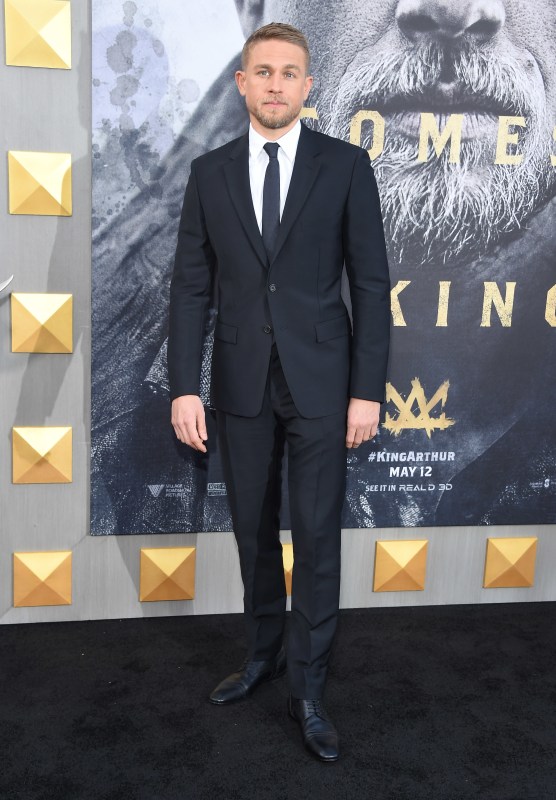 Up Next Mystery man