What's not to love about Eddie Redmayne? In 2016, he made make us fall in love with him all over again as former Hufflepuff and magizoologist Newt Scamander in "Fantastic Beasts and Where to Find Them." Wonderwall.com is bringing you the top 10 reasons we can't get enough of the British star. Keep reading for more…

RELATED: "Fantastic Beasts" cast — everything you need to know

1. He appreciates his time as a new dad

Eddie Redmayne and wife Hannah welcomed daughter Iris on June 15, 2016. As a new dad, Eddie doesn't take the time he spends with his newborn for granted. "I love time off," he told People. "It's amazing and so it's been great because I've got to spend the first four-and-a-half, five months with Iris, and I know that that is a very privileged thing because I speak to many mates of mine who have kids and they're back into work, days or three later."

2. He has amazing style

Eddie Redmayne's style is so good that it's award-worthy. In 2015, Eddie was nominated as the most stylish Brit at the British Style Awards. That same year, he topped GQ's list of best-dressed British men. When it comes to his fashion decisions, he gives credit to his wife, Hannah. In March 2016, he told The Mirror, "I'm color blind, so occasionally I'll go for things that are slightly outlandish and she'll temper me back into the world of taste."

RELATED: 10 things to know about Eddie

3. Have you seen him with glasses?

Eddie Redmayne is one of the few actors who looks even better with a pair of glasses. Just call him a sexy celebrity nerd!

Eddie Redmayne used to be roommates with Andrew Garfield and Jamie Dornan, and he's also good friends with Robert Pattinson and Tom Hiddleston. "When you've been in the acting world long enough, you work with people again and again. Jamie, Rob, Andrew Garfield and I have been working for about 12 years, starting in theater in London. I was at school and university with Tom Hiddleston," he told The Big Issue in January 2015. "When we go to Los Angeles we would stay on friends' floors and as a group of Brits we would stick together and help each other with auditions. People become family. So they are actually friends — I promise we're not just pumping hot air up each others'…"

5. He carries his own bags

Eddie Redmayne doesn't need anyone to carry his bags at LAX Airport. He proved that he's a low-maintenance guy by pushing his own Smart Carte with loads of luggage and no assistance. Sometimes it's the little things.

Eddie Redmayne and Hannah Bagshawe tied the knot in December 2014, and they seem like they're on an endless honeymoon. Not only does Eddie sneak public kisses, but he constantly gushes about his wife. "She is an absolute wonder. Because the work I do is all-encompassing, when I am prepping for it, she is a massive part of that. It is so lovely to do it as a team," he told The Telegraph in February 2016. He also said that marrying her was the "most wonderful" thing he's done.

7. He is a seriously committed actor

Eddie Redmayne played Stephen Hawking in "The Theory of Everything," and it was a role that he really devoted himself to in every way. In fact, he not only studied with a choreographer but spent weeks with motor neuron disease sufferers and their families at the Queen Square Centre for Neuromuscular Diseases. When he came to set, he was prepared with a scroll of paper that mapped out the degeneration of Stephen's condition and how he should play it. The film's director, James Marsh, spoke to The Guardian about how Eddie approached his job. "To say Eddie was hungry for the role was an understatement — he was ravenous," James said. "It was often quite uncomfortable to see what he had to do. He internalized the part. It took its toll physically, he was inhabiting an illness, which is a complicated thing to do. I was pushing him as far as he could go." And his performance left Stephen proud. "Congratulations to Eddie Redmayne for winning an #Oscar for playing me in The Theory of Everything Movie. Well done Eddie, I'm very proud of you," Stephen posted on Facebook.

When Eddie Redmayne won the Best Actor Academy Award for his performance as Stephen Hawking in "The Theory of Everything," he could not have been more humble. "Thank you, thank you," he began his speech. "Thank you to the Academy. I don't think I'm capable of articulating quite how I feel right now. I am fully aware that I am a lucky, lucky man. This Oscar — wow!" He continued, "Um, this Oscar… This belongs to all of those people around the world battling ALS. It belongs to one exceptional family — Stephen, Jane, Jonathan and the Hawking children. And I will be its custodian and I will promise you I will look after him. I will polish him. I will answer his beck and call and I will wait on him hand and foot." After his win, Eddie made a young child's day. He posed for a press shot with Laura Dern and then let her then-10-year-old daughter Jaya Harper hold his Oscar.

9. He's not modest about eating dessert

Eddie Redmayne has no shame when it comes to eating in front of an audience. When he was offered a Sprinkles chocolate cupcake at the Meet The Filmmaker: "Fantastic Beasts And Where to Find Them" premiere in New York City on Nov. 9, 2016, Eddie chowed down with happiness.

Eddie Redmayne is always willing to selfie and sign autographs for his fans. In spite of his fame, he's an approachable actor. In January 2016, he stopped to chat with young fans while shopping at IKEA in Wednesbury, England. Oliver Hodgkiss, 12, told The Daily Mail about his encounter with Eddie at the furniture store. "I was really nervous but I went over to him and said I liked his films. He smiled and said it was a big pleasure to meet me," Oliver shared. "He was really nice and I was so happy to meet him. I told him I was a big fan and he said thank you. It was great and I was so excited." And who could forget that time he passed out more than 6,000 wands to fans at San Diego Comic-Con? By gifting those wands in July 2016, you could say that he put a spell on his fans and made them love him even more! 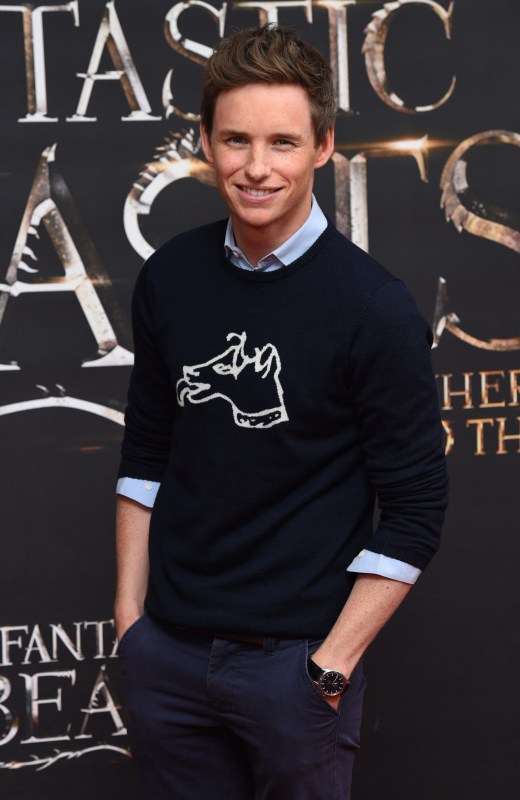 Up Next Everything Eddie