Who doesn't like Jimmy Fallon? The host of "The Tonight Show" is good-looking, ridiculously talented and, if his reputation is to be believed, he's one of the nicest guys in Hollywood. In honor of Jimmy hosting the 2017 Golden Globes on Jan. 8 at 8 p.m. ET/5 PT, we're rounding up the top 10 reasons we're totally obsessed with the comedy star. Keep reading to get started…

RELATED: A look back at Golden Globes pregnancy fashion

There's a reason why Jimmy Fallon — who studied improv with the Groundlings comedy troupe before scoring his big break — earned a spot on "Saturday Night Live." Even his tendency to break character with uncontrollable fits of laughter was super-funny. Plus his impressions of famous folks were some of the best in the show's history!

Okay, maybe not everyone loves Jimmy Fallon as much as we do. But have you ever heard anyone say anything truly terrible about the funnyman? That's because he's basically nice to everyone. How else do you think he managed to round up so many celebs — from Kim Kardashian West and Lady Gaga to Robert De Niro and Sarah Jessica Parker — to help him out during his first episode hosting "The Tonight Show"?

RELATED: Get to know the 2017 Golden Globe nominees' significant others

Music is as much a part of Jimmy Fallon's DNA as comedy itself. The "Saturday Night Live" alum, who started playing guitar as a teen, is famous for his silly songs, genre-bending covers and impressions of other artists. In recent years, his "Classroom Instruments" and "Lip Sync Battle" music sketches on "The Tonight Show" have become crowd-pleasers. He even released two albums of musical comedy. The only thing better than a guy with a good sense of humor is a guy with a good sense of humor and a guitar!

After he graduated from high school, Jimmy Fallon studied computer science at the College of St. Rose in Albany, New York. But he changed his major to communications then dropped out just a few credits shy of graduating to pursue his comedy career. Fifteen years later, the funnyman submitted a portfolio of his work to satisfy his remaining course credits and finally earned his college degree. Smart man!

No. 6: He's half of the hottest bromance in Hollywood

One of our favorite duos will always be Jimmy Fallon and Justin Timberlake. What we wouldn't give to be a third wheel to this famous friendship! The besties frequently collaborate with genius results — from their "History of Rap" series to impersonating each other on "Saturday Night Live" to making the best wedding toast, like, ever!

No. 4: He has great taste in women

Though he reportedly wooed Winona Ryder and Jordana Brewster, it's Jimmy Fallon's relationship with his current leading lady that really makes us smile. The funnyman married film producer Nancy Juvonen, who co-owns Flower Films with bestie Drew Barrymore, in December 2007. What makes the pretty blonde so special? For starters, she's a self-made woman. Nancy served as a producer on "Never Been Kissed," "Charlie's Angels," "Donnie Darko," "He's Just Not That Into You" and more! We definitely approve.

No. 2: He threw water in Lindsay Lohan's face — twice!

Let's be honest: We've all wished at some point that we could rain on trouble-prone starlet Lindsay Lohan's parade. Well, Jimmy Fallon has had the honor twice — even if both incidents were all in good fun. When Lindsay appeared on "The Tonight Show" in March 2014, Jimmy challenged the "Mean Girls" star to a game of War in which the loser had ice-cold water thrown in his or her face. The host only won one round, but it was enough for us! When Lindsay returned to the show in August 2014, Jimmy was on hand to help her take the Ice Bucket Challenge.

When it comes down to it, Jimmy Fallon is a good-looking guy. And we're not the only ones who think so. The 6-foot-tall comedy star even posed for Calvin Klein back in the day. "I really snuck that one in there," he told Paper magazine in 2001 of his brief stint as a male model. "When it was all done, no one made fun of me or anything. As a comedian, you don't really think that you're good-looking, so when someone asks you if you'd like to model Calvin Klein, you're like, 'Oh my God, yes!'" Well, we highly recommend that the "SNL" alum give modeling another go! 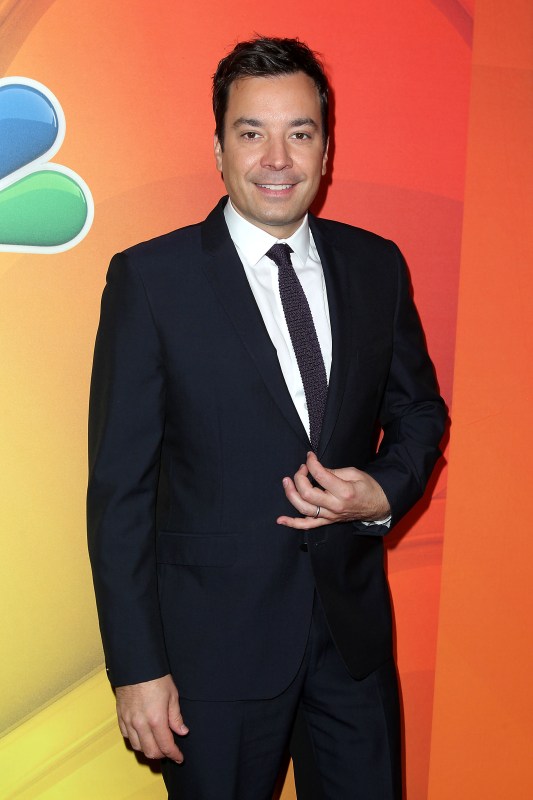 Up Next Fallon Fans