In the decade since Michael Fassbender made his Hollywood debut in 2007's "300," the Irish-German actor has quickly become one of our favorite stars. In honor of his latest film, "Assassin's Creed," which hits theaters on Dec. 21, 2016, Wonderwall.com is giving you the top 14 reasons why we're totally obsessed with the Fass. Let's start with the obvious…

No. 1: He's a ridiculously talented actor

Michael Fassbender has earned two Oscar nominations since he found mainstream success in Hollywood: in the supporting actor category in 2014 for his work in "12 Years a Slave" and in the lead actor category in 2016 for his performance in "Steve Jobs." He's consistently a stand-out on screen — whether in smaller dramas like "Shame" or "Frank" or in massive blockbuster films like "X-Men: First Class" or "Prometheus" (pictured).

There's no doubt about it: Michael Fassbender is a good-looking man. Go ahead: Stare deeply into his cool blue eyes. Now pick your jaw up off the ground!

No. 3: He has the best taste in women

Michael Fassbender is currently involved with his "The Light Between Oceans" co-star Alicia Vikander. Before her, he dated "X-Men: First Class" co-star Zoe Kravitz and "Shame" co-star Nicole Beharie. "I find women attractive in all shapes and sizes and although it's a bit of a cliché, what's attractive is someone who's confident and doesn't mind showing elements of themselves that society might consider weak or making a fool of themselves," he told Irish America magazine in 2012. "Eating what you like to eat, that's much more attractive. It's a prison to be constantly worrying about what others think of you and wondering if you are coming across as attractive or interesting or socially popular."

Michael Fassbender is arguably the hottest ginger on the planet. (We're looking at you, Prince Harry.) The way the light sets his golden-bronze beard aflame sets our hearts on fire. "I'm definitely happy to fly the flag for gingers," he told The Irish Times in 2012.

No. 5: He's into aging gracefully

Michael Fassbender has looked like he was 35 since he was 24, he told Irish America magazine in 2012. "I quite enjoy the lines on my forehead and the lines on my face, because that's my life," he said. "That's my history and I like to see it in other people. This wrinkle is down to some girl that broke my heart and I don't want to escape it in any way."

Though he trains for certain roles (like this year's "Assassin's Creed"), Michael Fassbender doesn't work on his body. "I swear I'm not even trying. I don't go to the gym," he told The Irish Times in 2012. "I like running. And I've tried surfing. But that scene didn't really take off until after I had left Kerry [Ireland]. I went swimming when I went home at Christmas but it was freezing and I get a bit nervous in the sea. I'm a good swimmer but I'm not that good. But I'm never going home to work on my body. Unless it's for work."

No. 7: He's not into playing the fame game

"I keep it pretty basic," Michael Fassbender told Irish America magazine in 2012 of his life post-fame. "Nothing has really changed in my everyday routine. It's always about telling the story well that matters to me — the fame that goes with it is not enjoyable to me. … I don't have a strategy for dealing with fame, because none of it really interests me. I can really say that honestly."

No. 8: He wanted to be a war journalist

Before he discovered his passion for acting, Michael Fassbender wanted to be a lawyer, an architect or a journalist. "Journalism was another thing that appealed to me, especially war journalism," he told Irish America magazine in 2012. "I thought it would be interesting to see the front line rather than just what's filtered through."

No. 9: He's honest about his emotions

Michael Fassbender was legitimately bummed out when he didn't score an Oscar nomination for his performance in the Steve McQueen-directed 2011 drama "Shame." "It did put me in a bad mood for the rest of the day," he admitted to The Irish Times in 2012. "There had been all this build up and then — oh, what the f—? I wasn't overjoyed. By midday I felt better about it but I wouldn't say I had forgotten all about it either. It's my own fault. I got caught up in all the hype. It shouldn't matter. It doesn't really. But the ego was [a] bit bruised in the aftermath."

Michael Fassbender's parents have owned and operated a restaurant in Ireland since he was a toddler, and he's learned more than a few tools of the family trade. "I do enjoy cooking and I can cook the basic things," he told Irish America magazine in 2012. "I'm definitely not afraid to go into the kitchen. … Obviously I grew up around that sort of world, so it's not something that scares me."

No. 11: He doesn't take himself too seriously

"The problem is, we feel a lot of pressure about looking silly or appearing weak, whatever that means, or being a failure," Michael Fassbender told Irish America magazine in 2012. "You have to keep saying in your head, 'What's the worst that can happen? I'm trying to tell a story — what's the worst that can happen?' You fall flat on your face, then hopefully you get back up again and go for it again and try something else. We're all going to die one day. … If you can relieve yourself of that pressure and not take yourself too seriously, then you can afford to look like a bit of an idiot. I think I am quite immature, or maybe just childlike."

"My sister and I always played music," Michael Fassbender told The Irish Times in 2012. "Every so often I want to pick up the tin whistle [a type of flute] again. I wish I had kept it up a bit better." The Oscar nominee also plays guitar and idolized Metallica guitarist Kirk Hammett. "Slayer. Metallica. Megadeth. I was far more interested in those guys than I was in movies. All I wanted to do was play heavy metal," he said.

"I love animals and would love to have a dog, but the nature of my work means I'd have to put it into a kennel and put it through quarantine and all that sort of thing and it really wouldn't be fair to the animal," Michael Fassbender told Irish America magazine in 2012.

Michael Fassbender's mother is Irish and his father is German. They met in London — where the actor, who is fluent in German, now lives — welcomed their son in Germany and relocated to Ireland when he was 2 years old. "The Germans have a good work ethic, so I've inherited some of that," Michael told Irish America magazine in 2012. "Then Ireland, for such a small nation, we really love the arts and storytelling, and there's a great mix of the two in me. My mother loved cinema and introduced me to many films and actors, which made me want to pursue this profession. I have her to thank for that. I suppose the German side wants to keep everything in control, and the Irish side wants to wreak havoc!" 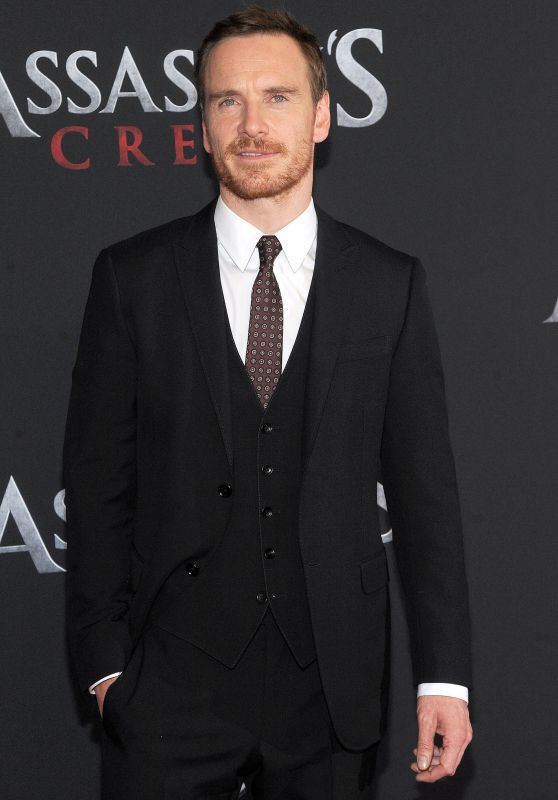 Up Next Foxy Fassbender