Zoe Kravitz isn't just an actress. She's also the frontwoman of electropop-R&B trio LOLAWOLF and the daughter of actress Lisa Bonet and rocker Lenny Kravitz. But we bet you knew that already! In honor of the "Divergent" star's 28th birthday on Dec. 1, 2016, Wonderwall.com rounded up 12 things about Zoe that you probably don't know — but totally should! Keep reading to get the inside scoop on the birthday girl…

RELATED: Celeb kids who followed in their parents' footsteps

No. 1: She bonds with other celebrity offspring over their parents' antics

After he suffered an on-stage wardrobe malfunction that left him completely exposed during an August 2015 concert in Stockholm — which, of course, was immortalized on camera — Lenny Kravitz made light of the situation by tweeting a NSFW screen shot of a text from Steven Tyler that read in part, "Dude… You never showed me that s—." Lenny's daughter Zoe Kravitz kept the joke going by sharing a screen shot of her texts to Steven Tyler's daughter, Chelsea Tyler: "So our dads talking about d—- on social media is cool," she wrote before texting the emoji of a monkey covering its eyes. "Oh god…..," responded Chelsea along with the emoji of a monkey covering its mouth.

No. 3: She once woke up to Ashton Kutcher cooking an omelet in her kitchen

A 15-year-old Zoe Kravitz had quite the surprise when she went downstairs one morning with a pal who was visiting and found Ashton Kutcher making breakfast in her home. She recounted the story during a 2014 appearance on "Jimmy Kimmel Live!" "'We don't even know Ashton Kutcher. Why would he be there?'" Zoe recalled asking her friend. "I go downstairs. I have, like, pimple cream on my face. I'm wearing a T-shirt… And there he is, making an omelet," she continued. "There's no one else in the kitchen. I don't even know if he's breaking and entering. And he was just like, 'Morning! Do you want an omelet?' And I was just like, 'Yeah.' And then we sat there before school and ate omelets, just not understanding why he was there."

No. 4: Her parents threw her a "piercing party"

When an 11-year-old Zoe Kravitz wanted to get her ears pierced, her mom, Lisa Bonet, threw a special party for her and her dad, Lenny Kravitz, flew in Angel — a woman who'd handled many of his piercings — for the event. "It sounds crazy, but to us it was like, 'You call Angel when you want something pierced,'" she told Complex in 2015. Unfortunately, Zoe chickened out at the party and ended up getting her ears pierced later at a local Claire's.

No. 5: She was hungover when she auditioned for "X-Men: First Class"

Zoe Kravitz didn't think she was a good fit for the role of mutant stripper Angel Salvadore in the star-studded 2011 action flick "X-Men: First Class," so she didn't take her audition seriously. "I rolled up hungover, wearing a hat and a T-shirt," she told The Independent in 2015. "When you don't think you have a shot, you don't put pressure on yourself and then you do a good job." (This trick may only work in Hollywood, folks.)

No. 7: Her signature 'do started out as a joke

"I originally did them as a joke, like an ode to the '90s," Zoe Kravitz told C Magazine in 2015 of her bust-length braids. "They aren't some symbolic thing, but it still feels important, I think, to be a brown girl with natural hair. You see blond girls with the same hair in every movie."

No. 8: She struggled with an eating disorder

"I had a really hard time when I was 16, 17, 18," Zoe Kravitz confessed to Complex in 2015. "I started with the eating disorder in high school. I don't think it was about the fame, but I think it was definitely about being around that world, seeing that world. I felt pressured." Things got worse when she portrayed a young woman with anorexia in the 2014 dramedy "The Road Within." According to Complex, Zoe dropped down to 90 pounds during production and got severely ill after she completed her work on the film.

No. 9: She only joined Twitter because she had to

Twitter is just not Zoe Kravitz's thing. She joined the micro-blogging platform in March 2015 and has tweeted just 30 times since then. "I only joined because there was a fake Zoe Kravitz on Twitter saying all this weird stuff that I didn't want to be associated with," she told ELLE UK.

No. 10: She's dated some of Hollywood's brightest stars

Zoe Kravitz has romanced — and rumoredly romanced! — some of Hollywood's finest. Her former loves include Penn Badgley (pictured with her here during a 2011 Miami vacation), "X-Men: First Class" co-star Michael Fassbender, "X-Men" alum Ben Foster and singer-songwriter Twin Shadow. She's also been linked to Chris Pine and Drake but insists that they're both just friends.

"I've known her since we were 3," Zoe Kravitz told ELLE UK of Lisa Marie Presley's daughter Riley Keough. She also counts Alexander Wang, Cara Delevingne, Alia Shawkat and Jennifer Lawrence among her famous friends. "I'd met her a few times, and she was like, 'You should come over and we'll hang out,'" Zoe told Rolling Stone in 2012 of how she bonded with J.Law, her "X-Men: First Class" co-star. "So I go over to her apartment, and she opens the door in a towel. She's like, 'Come in, sorry, you're early, I was about to shower.' And she drops her towel and gets in the shower, and starts shaving her legs, totally naked. She was like, 'Are we here yet? Is this okay?' And I was like, 'I guess we're there!'"

No. 12: She hates being called famous

"Don't ever call me that again. Ever. Please. Never again," Zoe Kravitz said after a reporter from ELLE magazine made the mistake of calling her "the famous one" during a 2015 interview. 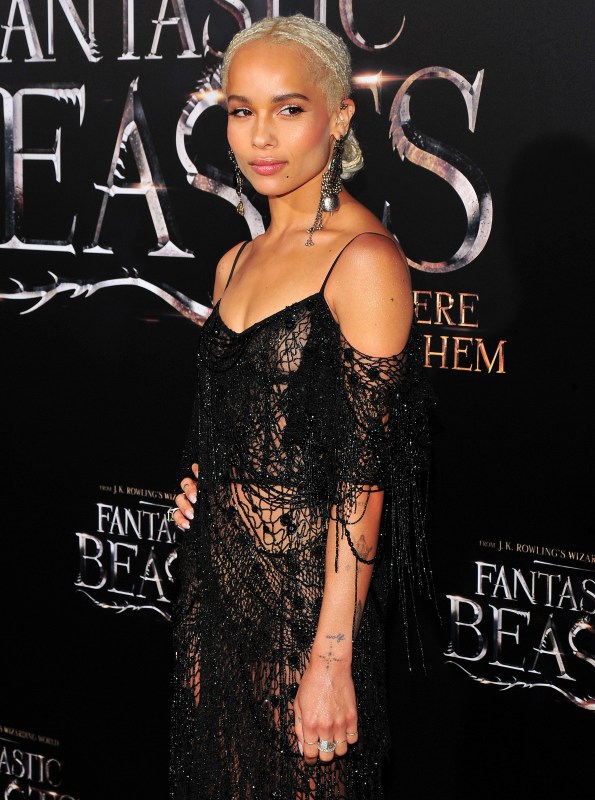