Tyler Perry is a big of Prince Harry and his wife, Duchess Meghan, because he's a big fan of true love. While promoting his new film "A Jazzman Blues" on "Today" on Wednesday, Sept. 21, the director was asked about opening his home up to the Duke and Duchess of Sussex after they stepped down as senior royals in 2020. "It was a very difficult time for them," Tyler explained. "What I know about the two of them, that I wish the world knew, is how much they love — these two people love each other. They found each other — out of all these odds against them finding each other, they found each other. The love they have is really, really moving, and I just wanted to do anything I could to support them." Meghan spoke about living at Tyler's Los Angeles home in a 2021 interview with Oprah Winfrey, explaining that they had to relocate from Western Canada because their residence's location became public knowledge. "We needed a house and he offered his security as well, so it gave us breathing room to try to figure out what we were going to do," Meghan said at the time. The couple — who remarkably had not met Tyler in person when they took him up on his offer — ended up buying an estate in Montecito, California, where they now live with their two young children. As she recently told The Cut, Tyler gifted the family a grand piano as a housewarming gift, telling them to "Write the soundtrack for your life."

Shakira breaks her silence on Gerard Pique split: 'Everything is so raw'

Shakira is speaking out for the first time about her split from longtime partner Gerard Pique, which she says has been "incredibly difficult" for the 7 and 9-year-old boys she shares with the soccer star. "I've remained quiet and just tried to process it all," the singer, 45, explains in Elle's October 2022 cover story. "I'm in the public eye and because our separation is not like a regular separation. And so it's been tough not only for me, but also for my kids. Incredibly difficult. I have paparazzi camping outside, in front of my house, 24/7." Shakira and Gerard announced their split in June, requesting privacy for the sake of their sons. But as she tells Elle, the paparazzi's constant presence means they have no "escape" as they try to process things. "And I've tried to conceal the situation in front of my kids. I try to do it and to protect them, because that's my number one mission in life. But then they hear things in school from their friends or they come across some disagreeable, unpleasant news online, and it just affects them, you know?" she says, adding that the boys "don't deserve" to be hounded by cameras. "Regardless of how things ended or how Gerard and I feel about each other as ex-partners, he is the father of my children," she says, noting that the pair have "a job to do" for their "incredible" kids. As Gerard's rumored new girlfriend and if their breakup was a surprise, Shakira says, "I think that those details are somehow too private to share, at least at this very moment — everything is so raw and new." Adds the Colombian star: "I can only say that I put everything I had into this relationship and my family."

Album of the Year contender Marren Morris says she might skip the 2022 CMAs after her public feud with Jason Aldean's wife, Brittany, who Marren recently called out for making transphobic comments on Instagram. In a new Q&A with the Los Angeles Times, Marren, whose album "Humble Quest" is up for the CMAs' top honor, was asked about potentially seeing the Aldeans at the Nov. 9 awards ceremony. "Honestly, I haven't decided if I'm gonna go," she said in the interview, published Tuesday (Sept. 20). "I'm very honored that my record is nominated. But I don't know if I feel [at] home there right now. So many people I love will be in that room, and maybe I'll make a game-time decision and go. But as of right now, I don't feel comfortable going." In August, Brittany, a conservative social media influencer, posted a makeup tutorial on Instagram in which she said, "I'd really like to thank my parents for not changing my gender when I went through my tomboy phase. I love this girly life." Marren's country music peer Jason responded to his wife with a laughing emoji. "Im glad they didn't too, cause you and I wouldn't have worked out," he wrote. But Brittany's remarks also sparked a wave of backlash, with country artists including Marren and Cassadee Pope slamming the Aldeans' transphobic comments. "It's so easy to, like, not be a scumbag human?" Marren wrote on Twitter, adding, "Sell your clip-ins and zip it, Insurrection Barbie." It wasn't long before Tucker Carlson invited Brittany onto his Fox News show, where she defended her statement. "I think that children should not be allowed to make these life-changing decisions at such a young age," Brittany said. Tucker, meanwhile, called Marren as a "lunatic" and a "country music person who I hope leaves country music immediately," which prompted the singer to sell T-shirts that said "lunatic country music person" as a fundraiser for Trans Lifeline and GLAAD's Transgender Media Program. Speaking to the Times, Marren admitted "it's exhausting" to play country music's "hall monitor" when it comes to "treating people like human beings," but said there's an "insidious culture of people feeling very comfortable being transphobic and homophobic and racist, and that they can wrap it in a joke and no one will ever call them out for it." The CMA Awards air on ABC on Nov. 9.

Armie Hammer "has been focused on his healing" after being accused by multiple women of sexual abuse and violence. That's according to his ex-wife, Elizabeth Chambers, who recently confirmed to E! News that's she's watched the new Discovery+ documentary, "House of Hammer," which details the allegations made against Armie and his family's history of dark scandals. "I consider myself a feminist and at the end of the day I also stand in solidarity with anyone who has been a victim of any sort and hope that they find that healing as well," she said. "There is always hope for anybody no matter what they're going through." Reflecting on "House of Hammer," Elizabeth admitted it was "painful" to watch. "I did not plan on seeing it, but I did drop the kids off at school one day and came home and watched it with my support system around me," she recalled. "It was obviously heartbreaking on so many levels and very painful. But at the same time, it exists. The past is the past and all we can do is take this as a moment to learn and listen, and hopefully process and heal in every capacity." Today, Elizabeth said she and Armie are "in a really great place" and "talk all the time" while co-parenting their two children.

Turns out Tom Hardy's frequent onscreen tough-guy vibe is no act. Over the weekend, the "Peeky Blinders" star secretly entered a major martial arts tournament outside London and won the whole thing. Tom's performance in the 2022 Brazilian Jiu-Jitsu Open Championship in Milton Keynes, England, on Saturday (Sept. 17) apparently stunned the other participants, too. "I was shell-shocked," one of the actor's opponents, Danny Appleby, told a local news outlet, according to The Guardian. "[Tom] said, 'Just forget it's me and do what you would normally do,'" he recalled, describing the Academy Award nominee as surprisingly strong. "You wouldn't think it with him being a celebrity," Danny said. "I've done about six tournaments and I've been on the podium in every one. But he's probably the toughest competitor I've had – he certainly lived up to his ['Dark Knight Rises'] Bane character, that's for sure," he added. A rep for the tournament told the outlet Tom, 45, "was very humble and was happy to take time out for people to take photographs with him" when fans recognized him. A blue belt in Brazilian jiu-jitsu, Tom is reportedly a trustee for the non-profit REORG, which teaches jiu-jitsu to people dealing with "serious injuries," PTSD and depression, according to The Guardian.

James Bond fans have been clamoring loudly for franchise producers to name their next 007 after Daniel Craig's retirement from the spy series, with Idris Elba often mentioned as an ideal replacement. But Idris recently told the Wall Street Journal, "when I look in the mirror, I don't see James Bond," seemingly dismissing the possibility. According to series execs Barbara Broccoli and Michael G. Wilson, it's actually tough to pitch stars on taking on the iconic role. The pair even had to sell Daniel on playing Ian Fleming's famous spy for the last five films — a choice the actor "lived to regret," Barbara joked. "The thing is, it's going to be a couple of years off," the longtime producer recently told Variety. "And when we cast Bond, it's a 10, 12-year commitment. So [Idris is] probably thinking, 'Do I really want that thing?' Not everybody wants to do that. It was hard enough getting [Daniel to do it]." Though she didn't elaborate on how they ultimately signed Daniel to play 007, Barbara explained, "A lot of people think, 'Oh yeah, it'd be fun to do one' … Well. That ain't gonna work." She continued: "With [Daniel], when we had the conversation at this very table about, you know, [whether he was] going to do it, he said, 'Well, I'm going to do it. I really want to be a part of it, the whole thing.'" Laughing, she added, "And he lived to regret that. … But it's a big commitment. It's not just showing up for a couple of months of filming." Later in the interview, the producer described each casting process as "a reinvention" of the character and said they're still in the "early days" of finding Daniel's replacement.

A clearly emotional Khloe Kardashian gets candid about her secret plan to welcome a second child with ex, Tristan Thompson, in a new trailer for Season 2 of "The Kardashians." "There is something that I am ready to talk about," Khloe says in the teaser, released earlier this week. "Tristan and I are having another baby." As her eyes get glassy, she explains, "It's supposed to be a really exciting time, and it's just a difficult experience." Khloe and Tristan welcomed their second child together — a boy, whose name they have yet to share — via surrogate in August. He was conceived in November 2021, prior to Tristan's paternity scandal, in which it was revealed the NBA player conceived a child during an affair with Maralee Nichols while he was still exclusively dating Khloe. (The former couple also shares 4-year-old daughter True Thompson.) "This has been a difficult time in my life," Khloe says in the Season 2 trailer. "But it's the start of something positive and happy and beautiful." The clip also features Kris Jenner shedding tears of her own over Khloe's situation. "It's hard to watch her in pain," Kris says in the clip. The new season of Hulu's "The Kardashians" premieres Thursday (Sept. 22). 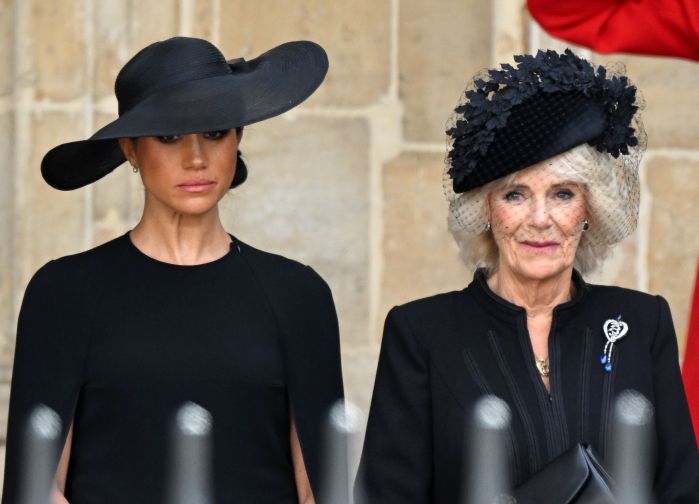 Up Next Final goodbye