"Lizzie McGuire" defined the Disney Channel for an entire generation of kids and tweens when it premiered back in 2001. The comedy series follows the titular character as she balances the many complications of life as a junior high school student with the help of her friends, family and animated inner-self. The show ran for 65 episodes, received two Emmy nominations, spawned a hit theatrical film and served as a launchpad for star Hilary Duff's incredible career. To celebrate the 20th anniversary of the "Lizzie" series premiere on Jan. 12, 2021, join Wonderwall.com as we take a look at what its stars are up to now…

Two decades on and "Lizzie McGuire" is still one of the most popular shows to have ever aired on the Disney Channel, averaging an estimated 2.3 million viewers per episode in its heyday. It's so beloved that the cast reunited in 2020 for a sequel series to air on the Disney+ streaming platform, but sadly, star Hilary Duff revealed that December that the how would not be moving forward, leaving millions disappointed. Luckily, all 65 episodes of the original series are still available to stream on the service, and many fans still can't get enough of the McGuire clan and the students of Hillridge Junior High.

Hilary Duff starred as "Lizzie McGuire" herself, and millions of young kids and tweens immediately identified with the clumsy and socially awkward teen as she navigated the roller coaster that is junior high school alongside the animated version of Lizzie, who often reveals her inner thoughts.

"Lizzie McGuire" served as a breakout project for Hilary Duff, who landed the role at 13. The hit series immediately turned the Houston-born actress into both a teen idol and a household name, with her face splattered across all kinds of popular merchandise at the time. While doing the show, Hilary also starred in hit films like "Agent Cody Banks" and "Cheaper by the Dozen" and released her first No. 1 album, "Metamorphosis." She famously decided against renewing her contract with Disney to continue "Lizzie" after her salary requests were denied. Instead, Hilary kept her eye on superstardom, leading box office wins like "A Cinderella Story" and "Raise Your Voice" in 2004 and "The Perfect Man" in 2005, recording three more albums that debuted in the top 5, releasing a hit fragrance and launching her very own clothing line, Stuff by Hilary Duff. By the late 2000s, Hilary's popularity began waning as she transitioned into more adult fare with film flops like 2006's "Material Girls," 2008's "War, Inc." and 2009's "According to Greta" and a less-than-popular greatest hits collection in 2008. That said, the mogul remained busy with more mature TV roles in "Beauty and the Briefcase," "Gossip Girl," "Law & Order: SVU," "Community" and "Two and a Half Men." She also launched the adult clothing line Femme for DKNY Jeans and wrote a bestselling series of young adult novels. 2015 saw a resurgence for Hilary as she launched a long starring run on the hit TV Land series "Younger" and released her fifth top 5 album, "Breathe In. Breathe Out." It's been announced that a spinoff series centered around Hilary's "Younger" character is in the works, which will keep her busy now that the "Lizzie" sequel series isn't moving forward. The jill of all trades is also set to release her first children's book in 2021, "My Little Brave Girl." Hilary was married to former hockey player Mike Comrie from 2010 to 2015; the pair have one son. She married singer-songwriter Matthew Koma in 2019. They couple are parents to daughter Banks Bair and are expecting their second child in 2021.

Adam Lamberg played Lizzie's best friend, David "Gordo" Gordon, who's also one of her closest confidants. Gordo is an aspiring filmmaker and avid hacky sack player who develops romantic feelings for Lizzie as the series progresses. The big-screen film ends with the pair sharing a long-awaited kiss.

"Lizzie McGuire" is still Adam Lamberg's best-known acting gig. With only a handful of small credits before becoming Gordo at 16, Adam didn't stick with acting for very long once the series wrapped in 2004. He starred in the indie flicks "When Do We Eat?" in 2005 and "Beautiful Loser" in 2008 before heading to college. The New York City native attended the University of California, Berkeley and went on to work for the Irish Arts Center in New York City. Adam was set to reprise his "Lizzie" character in the sequel series, but sadly, fans will have to continue imagining what became of Lizzie and Gordo after finishing junior high school.

Lalaine rounded out the core friend group on "Lizzie McGuire" as Miranda Sanchez, Lizzie's more confident best friend. Miranda, who has dreams of becoming a musician, sadly doesn't appear on the show's final episodes (or in the film) due to an extended trip in Mexico.

Lalaine Vergara-Paras got her start on Broadway in a production of "Les Misérables" and in the 1999 TV remake of hit musical "Annie." At 13, Lalaine scored her best known role to date as Miranda on "Lizzie McGuire." While doing the series, the Los Angeles-born actress also appeared in the Disney Channel film "You Wish" in 2003 as well as on episodes of "Buffy the Vampire Slayer." Also in 2003, Lalaine released her first album, "Inside Story." She's retained a fairly low profile since finishing "Lizzie," appearing in indie films like "Promised Land" and "Debating Robert Lee" in 2004, "Her Best Move" in 2007 and "Royal Kill" in 2009. Lalaine was also seen in the 2010 hit "Easy A" and on the web series "Off The Clock" from 2009 to 2013. More recently, the star was spotted in films like "One Night Alone" in 2018 and 2020's "Definition Please." Lalaine was arrested in 2007 and charged with drug possession, but the charge was  expunged after she completed time in rehab. There was no word if Miranda would appear on the "Lizzie McGuire" sequel series before it went away, but Lalaine has stayed in contact with her co-stars, as seen in this 2015 reunion pic shared on co-star Jake Thomas's Instagram page.

Lizzie's scheming younger brother, Matt, was played by Jake Thomas. The troublemaker is always coming up with new ways to make life more difficult for his sister and parents, but it's always rooted in how much he love and cares for them — as much as he'd like to deny it.

After starting out as a child actor, Jake Thomas nabbed small parts on "3rd Rock from the Sun" and "Touched by an Angel" before turning 10. His breakout performance came in 2001 with "Lizzie McGuire," and that same year, he also appeared in the hit Steven Spielberg film "A.I. Artificial Intelligence." The Tennessee native has stayed busy in the years since, attending high school and graduating from California State University, Northridge with a degree in screenwriting and Japanese. Jake has also kept a stacked acting resume with parts on hit shows like "Without a Trace," "ER," "Cory in the House," "House," "CSI: Miami," "Rules of Engagement," "Criminal Minds," "NCIS" and "Secret Life of the American Teenager." While also working as a commercial entertainment photographer, the actor appeared on the 2018 indie comedy "Baja" and the TV procedural "S.W.A.T." in 2019. Jake was set to bring Matt McGuire back for the "Lizzie" sequel series before it was scrapped.

Lizzie's father, Sam McGuire, was portrayed by Robert Carradine. Sam often struggles to relate to his two children and is usually seen trying to help them solve their problems without providing much assistance. While being a bit slower than his wife to figure out what's going on with the kids, Sam still always proves his dedication to his family.

The final member of the McGuire family is Joanne "Jo" McGuire, Lizzie's mother, played by Hallie Todd. The understanding mom is always trying to lend a supportive shoulder to her children, even if they don't always realize how understanding and helpful she truly is.

Los Angeles-born Hallie Todd had an extensive television career before starting on "Lizzie McGuire," starring on the hit 1980s sitcom "Brothers" and appearing on shows like "Highway to Heaven," "The Golden Girls," "Growing Pains," "Murder, She Wrote," "Star Trek: The Next Generation," "Going Places" and "Sabrina the Teenage Witch." Shortly after "Lizzie," Hallie had parts in projects including "National Lampoon's Thanksgiving Family Reunion," "Malcolm in the Middle" and "Brandy & the Whiskers." She then took a break from acting to focus on her family. The star returned to films with the 2012 indie "The Mooring," which she also co-wrote and co-produced with her husband, director-producer Glenn Withrow, and their daughter. She was also seen in 2016's "An American Girl: Lea to the Rescue" and will next appear in "The Last Champion" (her husband is directing it and she and her daughter co-wrote it). Hallie enjoys working with her family so much that the trio formed their own production company, House Media Film Partners. Hallie's also written two books, "Being Young Actors" and "Parenting The Young Actor." Hallie was also set to star in the "Lizzie" sequel series before it was scrapped.

Lizzie's main crush, Ethan Craft, was played by Clayton Snyder. The well-meaning heartthrob is the object of every girl's affections at Hillridge Junior High. He's not the sharpest tool in the shed, but his kindness and good looks (as well as his deep love for food) are the keys to his charm.

As Lizzie's arch-nemesis Kate Sanders, Ashlie Brillault was a consistent scene-stealer. The image-conscious teen is the most popular girl at Lizzie's school, and despite being a former friend of Lizzie and Miranda, Kate considers herself too cool to be seen with an "outfit repeater" like Lizzie anymore.

Ashlie Brillault's only acting credit outside of "Lizzie McGuire" was a 2003 episode of the sitcom "One on One." After the show wrapped, the San Francisco native left acting behind to pursue a life outside of Hollywood. Ashlie instead focused on a career in law: She earned a law degree from the University of Denver and took on a career as a criminal defense attorney. While you won't see her gracing red carpets anymore, you can still find Ashlie posing with her husband and children on social media. 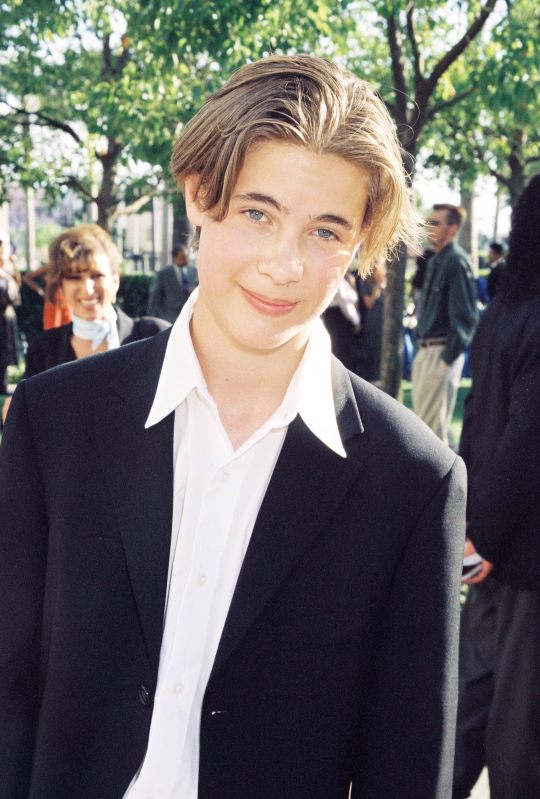