Over the last year, we've witnessed some stunning red carpet moments — and many of the best feature stars wearing red! Join Wonderwall.com as we take a look at the best red looks on the red carpet this year, starting with this gorgeous getup… In September, Kate Hudson attended the "Mona Lisa and the Blood Moon" premiere during the 2021 Venice Film Festival in this jaw-dropping look from Valentino's Resort '22 collection. From the delicately placed tulle to the intricate lace detailing along the bodice and arms, Kate was a standout that evening.

RELATED: All the looks from the 2021 CFDA Fashion Awards

If there's anything 2021 has taught us, it's that Zendaya doesn't play around when it comes to donning show-stopping looks at major events. At the CFDA Fashion Awards in November, the "Spider-Man: No Way Home" star — whose look was put together by her talented stylist, Law Roach — stepped out in this killer combo: a bandeau top and a matching column skirt embellished with a billowing peplum waist, all custom made by Vera Wang.

Lady Gaga loves drama, and this red-hot Versace dress is as dramatic as it comes. The singer-actress donned the satin gown featuring criss-cross cut-outs for the premiere of her film "House of Gucci" in Milan, Italy, in November.

In November, Gal Gadot attended the world premiere of her latest flick, Netflix's "Red Notice," looking like an absolute vision in a high-low sequined dress with ruffle details from Loewe's Spring 2022 collection.

At the 2021 Academy Awards in April, Reese Witherspoon donned a red Dior confection that featured pretty pleats and an asymmetrical neckline. The look was finished off with a simple black belt.

In September, Megan Fox attended her first Met Gala — and she absolutely slayed. The actress stepped out in a striking gown by Dundas that played peekaboo with its plunging lace-up neckline.

Megan Fox's boyfriend, Machine Gun Kelly, likes to have fun with his style too — just take a look at what he wore to the 2021 MTV Video Music Awards in September: a sparkly red monochromatic suit by Dolce & Gabbana.

At September's Met Gala, which featured the theme "In America: A Lexicon of Fashion," Tessa Thompson opted for a textured minidress by designer Iris van Herpen that featured a sultry sheer bodice. She gave the look some Southern flair with knee-high Western boots and a black cowboy hat.

In November, Duchess Meghan and Prince Harry made their return to the red carpet at the Salute To Freedom Gala at the Intrepid Sea-Air-Space Museum in New York City. As for what the Duchess of Sussex chose to wear? A beautifully bold gown by Carolina Herrera with a plunging neckline and a regal train.

Tracee Ellis Ross dazzled on the red carpet at the 2021 Primetime Emmy Awards in September. The "Black-ish" actress wore a retro-inspired one-shouldered frock by Valentino.

When it comes to stunning sartorially, Sarah Paulson always understands the assignment. At the 2021 Primetime Emmy Awards in September, the "Impeachment: American Crime Story" star sported this billowing ballgown by Carolina Herrera. From its full skirt and statement sleeves to its plunging neckline and rich hue, this was a definite standout in our books.

Breathtaking! For the 2021 MTV Video Music Awards in September, Camila Cabello hit the red carpet in a bustier-style ballgown by Alexis Mabille featuring a statement bow.

Finneas understood the assignment! The "Optimist" singer-songwriter sported a crisp red suit by Givenchy — with matching red boots and a scarf-style face mask — when he attended the Met Gala in September.

Amanda Seyfried left us speechless when she arrived on the red carpet at the 2021 Academy Awards in April in this show-stopping gown by Armani. Thanks to its voluminous tulle and flattering fit, the gown beautifully channeled Old Hollywood glam.

Angela Bassett walked the red carpet at the 2021 Academy Awards in April in this dramatic dress by Alberta Ferretti that had oversized sleeves that created a bow in the back.

Mandy Moore attended the 2021 Primetime Emmy Awards in September in a Carolina Herrera confection. The "This Is Us" star looked comfortable and beautiful in the spaghetti-strap gown with tulle accents.

Karlie Kloss looked divine when she attended the Met Gala in September in this stunning rose-inspired confection by Carolina Herrera.

Olivia Colman watched the 2021 Academy Awards in April at a London screening event wearing a bold couture gown by Dior. From its high neck and billowing sleeves to its figure-flattering fit and ankle length, Olivia's frock exuded elegance.

We were definitely impressed by Maluma's Met Gala look in September! The Colombian singer arrived at the "In America: A Lexicon of Fashion"-themed benefit in this bejeweled Western-inspired ensemble by Versace.

Eiza Gonzalez posed for photos on the red carpet at the Met Gala in September in this body-hugging halter-style dress by Versace. From the thigh-high slit to the single sleeve, the "Godzilla vs. Kong" actress certainly made a statement.

Jessica Chastain looked incredible at the premiere of her miniseries "Scenes From a Marriage" during the 2021 Venice Film Festival in September. She pulled out all the stops in this slinky strapless gown by Atelier Versace that featured crystals and animal-print-inspired embroidery.

Beautiful! "The Marvels" star Zawe Ashton arrived at the 2021 Tony Awards in September in this decadent tulle gown by Carolina Herrera.

For September's Met Gala, Addison Rae wore a vintage Tom Ford for Gucci gown. According to the "He's All That" star, the dress was a nod to the red dress that pop star Britney Spears wore to the 2002 Grammy Awards.

In July, Maggie Gyllenhaal attended the premiere of "Benedetta" at the 74th Cannes Film Festival in this elegant gown by Atelier Versace. The silhouette, while simple, was elevated with a subtle-yet-sexy plunging neckline.

The Met Gala is all about taking risks, right?! For this year's event, which was held in September, music star Rosalia opted for this Rick Owens ensemble that included platform thigh-high boots, fringed shorts and a pair of seriously textured gloves. Our favorite part of her look, though? The gorgeous off-the-shoulder top that doubled as a dramatic fringe-embellished train.

At the 2021 MTV Movie & TV Awards in May, "Outer Banks" actress Madelyn Cline stunned in this Versace minidress with structured shoulders.

At the "F9" premiere in June, Kobe and Vanessa Bryant's daughter Natalia Bryant looked fierce in her power suit! Natalia, who signed with IMG Models in February, paired her jacket and trousers with a colorful bustier by Dolce & Gabbana.

We couldn't help but love this all-red ensemble — a suit, a matching bralette and pointed heels — that singer Tennille Townes wore to the 2021 CMA Awards in November.

How stunning is she?! In September, Puerto Rican actress Adria Arjona stepped out for the Venice Film Festival premiere of "Competencia Oficial" in this show-stopping strapless gown from Armani Prive's Fall 2014 collection. That feathered bolero was everything!

Jennifer Hudson took a style risk at the 2021 Country Music Association Awards in November — and it paid off! The "Respect" actress stepped out in a lace and satin catsuit by Dolce & Gabbana that included a bustier top and a floor-length train.

Up-and-coming designer Kenneth Nicholson attended the 2021 CFDA Fashion Awards in November in his very own creation: an incredible monochromatic getup featuring pockets and a peplum from his Spring 2022 collection. 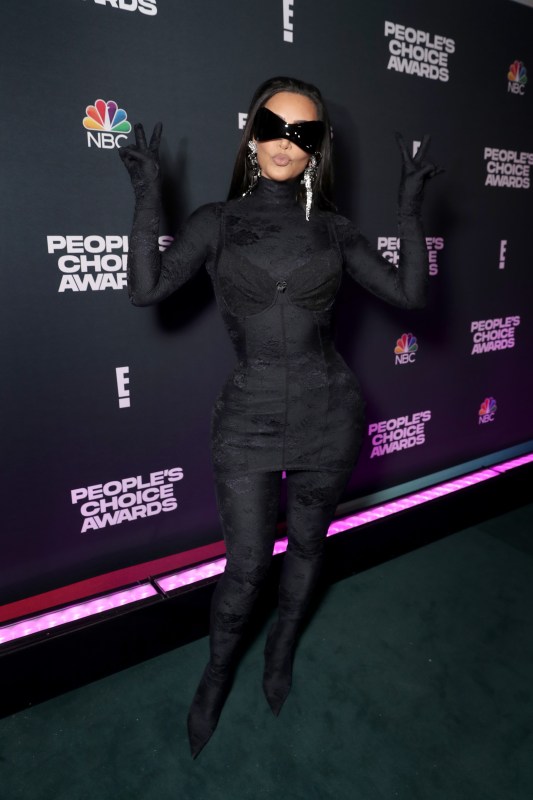