The People's Choice Awards let fans give awards to their favorite stars, and now it's time to weigh in on those stars' style! The 2017 People's Choice Awards was a mixed bag of fabulous fashion and unfortunate frocks. First up? Gwen Stefani, who donned this bizarre two-piece Reem Acra getup. Gwen's look featured various shades of blue, flowers and feathery tulle detailing, all amounting to a lot of confusion. And to make matters worse? She paired it with fishnets! Keep reading to see the rest of the best and worst style of the night!

Red hot! Ruby Rose donned this stunning red pantsuit by Veronica Beard at the 2017 People's Choice Awards. The star went sans shirt underneath her perfectly tailored choice and scored a major hit! And her makeup was equally flawless. We'll take a closer look next…

RELATED: Fashion hits and misses of 2016

Ruby Rose is so gorgeous she can pull off any makeup trend. It's no surprise she executed this dark lip flawlessly while keeping the rest of her makeup subdued and her short hair straight and simple.

Sarah Jessica Parker's style continued to let us down in 2017 as she followed up her Golden Globes monstrosity with this gold lamé ensemble. The ill-fitting dress by J. Mendel Couture featured a strapless top portion and bizarre sleeves that really need a second look.

Sarah Jessica Parker took home an award for Favorite Premium Series Actress, but she was not a winner in the fashion department. Check out the odd tight-fitting sleeves that she wore separately from her J. Mendel dress. They got even stranger by flaring at the ends.

Jennifer Lopez's Reem Acra gown featured beautiful jeweled detailing across the front. But despite all the bling on her chest, the star didn't shy away from adding even more with her accessories. Jennifer opted for drop earrings and an excess of jeweled rings by H. Stern. The star kept her beauty concept as dramatic as her glam gown — an updo and a smoky eye.

2017 has delivered a lot of disappointing Priyanka Chopra style so far! At first glance, the star's pale pink Sally LaPointe look appeared to be all one piece, but it was an optical illusion! Another angle revealed a different story…

Upon closer inspection, you can see that Priyanka Chopra's look was actually two pieces — a high-low strapless top and a skirt with fringe detailing. Though the ensemble's color and cut were lackluster — we were hoping for something bolder on Priyanka — we can't deny the outfit's twirl appeal…

Though we weren't crazy about Priyanka Chopra's Sally LaPointe getup, we do admit it looked very fun to twirl in! The star spun around on the red carpet in the two-piece look, which she accessorized with Schutz heels and jewelry by Nirav Modi.

Jamie Chung dazzled on the red carpet in this beautiful pale yellow dress by Martha Medeiros that featured floral detailing, a thigh-high slit and tiny cutouts at the hip. It ended up being one of our favorite looks of the night. Her Csarite by AnaKatarina jewels just sealed the deal for us!

Sofia Vergara underwhelmed in the style department at the People's Choice Awards. The star, who took home the prize for Favorite Comedic TV Actress, wore this Marchesa creation. The form-fitting white skirt and shimmering gold bodice were reminiscent of many of her past red carpet looks, and those boring T-strap heels just helped made this look a miss in our book.

We loved Kristen Bell's metallic jumpsuit by Rasario! The Favorite Comedic Movie Actress nominee opted for a chic silhouette, which featured a bustier-style top with white detailing, and even matched her makeup to the ensemble. Get a closer look next…

To go with her metallic jumpsuit, Kristen Bell opted for a silvery smoky eye. She kept the rest of her beauty look minimal, going with messy waves and a neutral lip.

They're down one member, but the ladies of Fifth Harmony still couldn't manage to keep things coordinated on the red carpet. Singers Ally Brooke, Normani Hamilton, Lauren Jauregui and Dinah Jane all opted for various shades of blushes, tans and whites. Though we applaud the color palette, only Lauren's dress seems to fit her properly. Maybe the new fifth member can double as a tailor?

We adored Melissa McCarthy's look at the People's Choice Awards. The Favorite Movie Actress winner also takes home top honors from us for her printed jumpsuit and cute peep-toe heels.

Flirty in fringe! Blake Lively showed off her post-baby bod in this tiny Elie Saab creation at the People's Choice Awards. Her minidress featured plenty of sheer paneling and dripped in fun dangling fringe detailing. And we're equally obsessed with her black, silver and gold studded stilettos.

Blake Lively kept things simple with her People's Choice Awards hairdo, opting for slick, straight hair styled in a center part. But those massive drop earrings were anything but simple, and we loved her bronzed, warm makeup tones.

The girls of "Fuller House" sure love their excessive floral prints! Lori Loughlin, whose show was up for Favorite Premium Comedy Series, donned this tea-length, long-sleeved frock with a thick pink border, which was just too busy for our taste.

Cameron Dallas took home the award for Favorite Social Media Star at the 2017 People's Choice Awards, and he also won in the style department in this edgy, monochromatic ensemble. The social media star pulled off laid-back red carpet style flawlessly in a black jacket, T-shirt, cropped pants and loafers.

Like everyone else, we're obsessed with "This Is Us," but we're not obsessed with Chris Sullivan's People's Choice Awards look. Chris, who plays Toby on the PCA-nominated NBC show, sported these bizarre rainbow-splattered pants, red Nikes, a suit jacket, a red bow tie and… well, you need to take a closer look at those glasses.

What's happening here, Chris Sullivan? The "This Is Us" star's spectacles featured mismatches lens shapes, with one side circular and one side square. We're so confused that we almost overlooked that hat!

Peyton List looked stunning in a pale minidress by Yanina Couture that featured a sheer layer with floral detailing, which she paired with strappy Sophia Webster heels. The actress kept her hair simple, piled high in an updo, with dewy makeup for a youthful, sweet red carpet look.

While we're happy it's not floral like the rest of the "Fuller House" ladies' gowns, we're not into Candace Cameron Bure's People's Choice Awards look. The Jenny Packham frock's full sleeves drowned the top half of the star, while the keyhole cutout seemed misplaced for an otherwise matronly frock.

Candace Cameron Bure's lackluster dress was paired with an even more disappointing hairstyle. We're actually not quite sure what look the "Fuller House" star was going for with this teased hairdo.

"Dancing With the Stars" was up for Favorite Competition TV Show, and it seemed like pro Cheryl Burke was channeling her show costumes with this look. Her black dress featured a sky-high slit and a lace lingerie-like bodice. She accessorized with the new red carpet approved necklace — the choker — for an awesome red carpet look.

Ashley Greene delivered a miss in this form-fitting lilac number by Jeffrey Dodd. The strappy silver heels didn't help her cause much either.

Have mercy! John Stamos was the best-dressed man by a mile at the People's Choice Awards, rocking a black shirt underneath a perfectly tailored blue suit and accessorizing with snakeskin dress shoes.

Camilla Luddington showed off her baby bump in this sparkly black form-fitting dress. We loved the addition of the pewter pumps for a pop of unexpected color.

We love vests and were excited to see one hit the red carpet, but Chandra Wilson's attempt fell flat. Buttoned only at the top, this vest ensemble came across as an extremely casual look for a red carpet.

Rapper G-Eazy looked sharp at the People's Choice Awards in a long suit jacket, a super-skinny tie and a Gucci belt. Though we could do without the pattern on his dress shirt underneath, overall, he pulled it off.

Karina Smirnoff, what are you doing? The "Dancing With the Stars" pro showed up on the red carpet in this black belted creation, which looked a lot like a loofah to us.

We would have loved to see Blake Shelton in something other than… jeans and cowboy boots. The country music star and coach on "The Voice" disappointed us by being utterly predictable on the red carpet.

Up close, Victoria Justice's gold minidress had an insane amount of detailing. The beading left no need for accessories, and Victoria kept things extra-simple with straight hair and warm-toned makeup.

Andrea Navedo, whose show "Jane the Virgin" was up for Favorite Network TV Comedy, looked gorgeous in this form-fitting marigold gown.

Sneakers on the red carpet are nearly always a fashion faux pas, but sunglasses too?! Two fashion strikes for you, Dave Coulier!

"Grey's Anatomy" star Caterina Scorsone showed how floral should be done at the People's Choice Awards. The star sported this black knee-length dress by Erdem that featured pretty blue, red and cream flower detailing throughout. 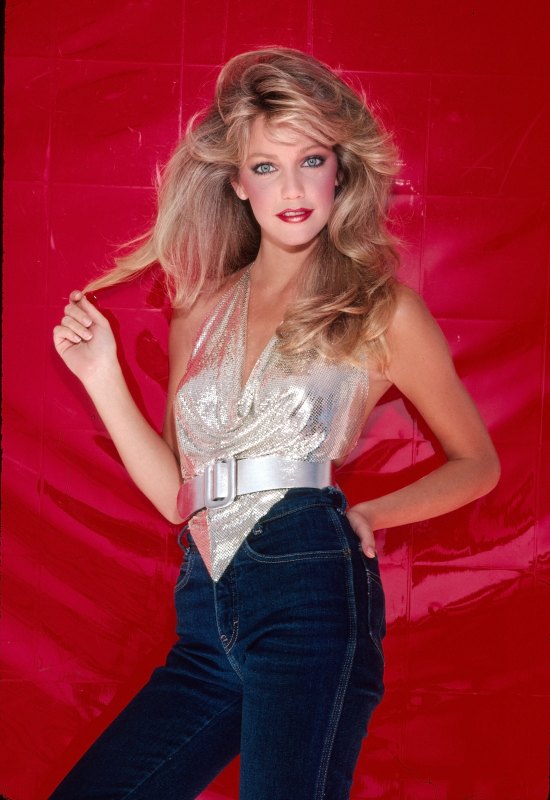