The Golden Globes statuettes have all been handed out and now it's time to judge the fun part — the fashion! Wonderwall.com is rounding up the best- and worst-dressed stars of the 2017 Golden Globes red carpet, starting with one of the most unfortunate looks of the evening, brought to you by Carrie Underwood. Well, we'll give her some points for… being bold! Carrie's mess of a pale pink dress cemented itself as one of the worst of the night thanks to the bizarre floral-like ruffles on the bodice. Keep reading to see more Globes fashion hits and misses…

Natalie Portman nearly camouflaged her baby bump in this beautiful yellow Prada gown, but it was the star's accessories that stole the show. The Best Performance by an Actress in a Motion Picture – Drama nominee donned Tiffany jewelry that hailed back to 1910.

Kerry Washington really let us down on the 2017 Golden Globes red carpet. The star opted for this bizarre gold gown by Dolce & Gabbana, which featured embellishments on the sleeves and an oddly placed buckle on the left side of the waist.

RELATED: Most talked-about moments from the 2017 Golden Globes

Michelle Williams looked lovely in Louis Vuitton at the 2017 Golden Globes. The star donned this printed off-the-shoulder creation, but it was her trendy accessory that really sealed this outfit. Take a closer look…

Michelle Williams accessorized with one of the most popular necklaces of the moment — a choker! The star's selection of a typically casual necklace worked perfectly on the red carpet.

Though she was nominated for her work in "Arrival," Amy Adams still went with her "Nocturnal Animals" director when it came to 2017 Golden Globes fashion. Unfortunately, this Tom Ford gown fell flat for us. The structured and sequined dress was a snooze and reminiscent of many of Amy's past red carpet looks.

Black and gold beauty! Blake Lively stunned in this custom Versace creation at the 2017 Golden Globes. The star's black velvet gown featured a long dramatic train and gorgeous gold detailing along both the top and on the pocket detailing.

There was a whole lot happening on Jessica Biel's Elie Saab gown and we are not fans. The star's dress started with a black top portion with a plunging neckline and belted waist. The bottom portion was made up of a black-and-white print with a thigh-high slit, and odd 3-D appliqués.

Lily Collins looked like a fairy princess at the 2017 Golden Globes. In one of our favorite looks of the night, the nominated actress wore a rosewood pink A-line dress with beaded detailing by Zuhair Murad. Let's get a closer look at her hair, makeup and jewels!

Lily Collins went with a bold red lip and rose-colored eyeshadow and swept her hair up in an intricate bun to keep the attention on her gown's gorgeous low back. She accessorized with beautiful Harry Winston drop earrings.

Yawn! Winona Ryder's dress was a snoozefest. The "Stranger Things" star opted for a black and boring Viktor & Rolf gown for her show's big night.

Reese Witherspoon chose yellow for the 2017 Golden Globes, a hue that would end up dominating the red carpet. Reese's canary confection by Atelier Versace fit her perfectly and featured a thigh-high slit on the left side.

Oh no, Priyanka! While we normally adore Priyanka Chopra's dynamic red carpet looks, we hate this one. The "Quantico" star wore this Ralph Lauren frock, which looked more like well-fitted rolled-on wallpaper than a red carpet gown. We do love the hair and makeup though! Let's take a closer look…

Though we weren't fans of her Ralph Lauren gown, Priyanka Chopra's hair and makeup were flawless. The star went with a dark lip and kept her dark hair down and wavy for the big night.

Sarah Jessica Parker wore a wedding dress to the 2017 Golden Globes. No, seriously, the dress was from Vera Wang's 2017 bridal collection. We're not sure Carrie Bradshaw would approve, and we don't either.

Mandy Moore looked glam and gorgeous at the 2017 Golden Globes in this Naeem Khan creation. Our favorite part of the gown? That elegant cape draped off of her shoulders.

Sorry, Sansa! We're not into Sophie Turner's 2017 Golden Globes look. The sheer cream and black Louis Vuitton number featured a lot of asymmetrical and jagged cuts, with just too much going on overall. She accessorized with jewels by Forevermark Diamonds.

Sienna Miller went with this cute and simple Michael Kors Collection dress. We liked the simplicity of her gown's cutouts, and also loved her throwback accessory choices. Check them out…

Sienna Miller opted for a refreshing accessory on the red carpet — pearls! Her pearl necklace was a nice departure from the diamonds and gemstones that most stars wore around their necks, and we were also into her high ponytail.

Matt Damon and Luciana Barroso were the best-dressed couple of the night, both sporting custom-made Versace creations. Matt went classic in a black tux, while Luciana wore a white fitted gown with cutouts and Swarovski crystal detailing.

"The Edge of Seventeen" star Hailee Steinfeld looked perfect in this lavender custom Vera Wang creation, which she accessorized with Forevermark Diamonds. Her flowing pale purple frock featured both a train and sheer long sleeves and looked fit for a princess.

Kristen Wiig's white dress left a lot to be desired. The typically stylish star's gown featured a cutout fabric and went completely sheer above the knee.

We're obsessed with Zoe Saldana's bold Gucci gown! The star donned this pale pink and red silk chiffon dress, which featured an asymmetrical tiered ruffled skirt and a phenomenal blush satin bow, which ended up being one of our favorite looks of the night.

Ruth Negga opted for a funky and futuristic number by Louis Vuitton. Though we loved the sparkly metallic fabric, we could do without the zippered front.

Killing it! Kristen Bell was anything but boring in this black dress by Jenny Packham. The long-sleeved frock featured a dangerously low-cut neckline and the sequined detailing sparkled.

Chrissy Teigen typically dominates our hit lists, but this time we have to label her Marchesa dress as a miss. The gold gown's peplum layer at the waist lost us, and the high neckline seemed excessive.

Riley Keough went with silver and black at the 2017 Golden Globes. Her asymmetrically cut gown was just enough of a departure from other safe, boring black dresses and managed to have just enough sheer paneling.

We're not crazy about Felicity Jones' Golden Globes selection. The star wore this ruffled pink Gucci gown, and though we loved the color, it was the dark pattern at the bodice and hemline that lost us. Oh, and that bow!

Well, we like the color of Jessica Chastain's Golden Globes gown… but we're a little confused about the strap placement. And the detailing down the left side only. The Prada creation lands on our miss list even though we want to love it.

Another pantsuit! Evan Rachel Wood rocked this custom Altazurra pantsuit on the 2017 Golden Globes red carpet. Our favorite part of the look? The blouse she rocked underneath, which featured an oversized bow at the neck.

Though we applaud the originality of Janelle Monae's custom Armani frock, the black-and-white polka-dot high-low gown looks more like a Jessica McClintock prom dress than a couture creation. She completed her look with Forevermark Diamonds.

Busy Philipps rocked this adorable Stella McCartney gown for the Globes. Between the floral embroidered detailing down the front and the glam yet simple train, we're in love with the whole thing!

Those are a lot of ruffles, Kelly Preston! The actress wore this belted gray and silver printed frock, which was rather boring and made her look more like a wedding guest than someone attending a major Hollywood award show.

Yellow was a major player on the 2017 Golden Globe carpet, and "Game of Thrones" star Maisie Williams got on board! The actress wore this beautiful pale yellow floor-length gown, complete with a train, keeping things classic and simple.

Tracee Ellis Ross went metallic at the 2017 Golden Globes, rocking a silver strapless cage dress from Zuhair Murad's Spring 2016 collection. But it was her accessories (look at those rings!) that really stole the show.

Where does that slit end, exactly, Emily Ratajkowski? We loved the pale yellow hue of the Reem Acra gown and antique stone detail, but we could do without that sky-high center slit.

Anna Chlumsky wore this emerald green gown that featured one black strap. While the color is excellent, the unflattering draping and thick, oddly placed strap made this a miss for us.

Kathryn Hahn has become one of our favorite style stars recently! The actress rocked this impossibly cool black pantsuit — sans undershirt — giving just a glimpse of a black undergarment underneath her suit jacket.

This is velvet! Chrissy Metz looked gorgeous in a deep purple long-sleeved velvet gown, complete with detailing on the cuffs and around the waist.

Millie Bobby Brown did not disappoint at the 2017 Golden Globes. The stylish young actress wore this silver Jenny Packham frock, which was both adorable and age-appropriate.

We loved Giuliana Rancic's fresh floral look! Her dress by Rani Zakhem featured a high neck, beautiful flower detailing and a gold belt. She completed her look with Forevermark Diamonds.

Karrueche Tran gave us major prom vibes, and at the Golden Globes, that's not a good thing. The star wore a hot pink mermaid-style Dolce & Gabbana gown with plenty of ruching that seemed more apropos for a high school dance than a major Hollywood award show. 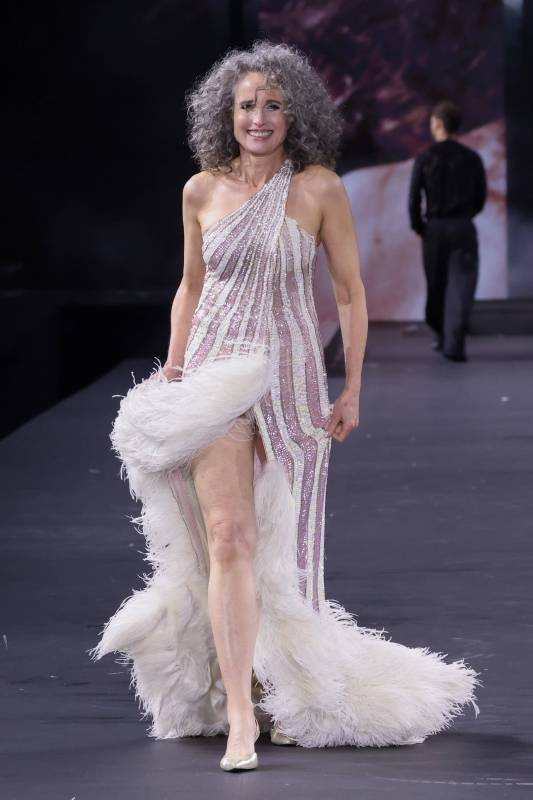