Spring is almost upon us! Let's take a look at the most recent round of best and worst dressed stars, starting with Anne Hathaway! Oh, Anne. We struggled to like the vintage Armani Prive gown she wore to the New York City premiere of "Colossal" on March 28. The dress, which appeared on the runway in 2006, had fun feather-like detailing down the sides, but it was the detailing at the collar that really lost us. Let's take a closer look next…

Maybe next time you're picking a dress for the red carpet, make sure it doesn't hide your pretty face! The obscenely high collar on Anne Hathaway's Armani gown covered the lower portion of her face, making it difficult to weigh in on her beauty look.

A vision in red! We're obsessed with Cara Delevingne's red Mugler ensemble. The supermodel-turned-actress wore this look during CinemaCon in Las Vegas on March 28. It featured a blouse with a plunging neckline and a fitted leather skirt with edgy zipper detailing.

Yikes! We hated Scarlett Johansson's selection for the New York City premiere of "Ghost in the Shell." The Balmain sequin-striped dress came off more costume-ish than anything, and the high slit paired with those chunky shoes was a terrible combo.

Pretty in purple! Charlize Theron donned this short-sleeved minidress from Gucci during CinemaCon in Las Vegas on March 29. We adored the floral frock, which was complemented perfectly by her simple black strappy heels. Next up? Her beauty look!

Charlize Theron complemented her gorgeous Gucci getup with simple makeup including a pretty pale pink lip. Her hair was kept equally simple — just some light waves — so she didn't detract from the gown's bold pattern. She also kept her accessories minimal, opting for small hoops.

What's happening here, Naomi Watts? The star opted for a nautical-inspired Valentino number, which featured a sheer navy blue overlay with white stripes and a bow-tie collar, for a March 29 appearance at CinemaCon in Las Vegas. And while that element was fine — though the sheer fabric seemed unnecessary — it's the nude slip layer underneath that really confused us. Its length and odd high neck threw off the whole ensemble.

We love a good statement tee, and one that has the celeb poking fun at herself? Even better! Victoria Beckham, who often gets accused of rarely smiling, rocked a white T-shirt emblazoned with the words "Fashion stole my smile" while arriving at LAX Airport in Los Angeles on March 28 and paired it with black trousers for a casual and cheeky fashion moment.

She may have been smizing, but Tyra Banks' ensemble wasn't fierce at the "America's Got Talent" Season 12 kickoff event in Los Angeles on March 27. The star wore this strange lace blazer paired with sheer lace… tights? See-through pants? We're not quite sure. Next up, we need a better view of her beauty look!

While we liked her pinned-back waves, we weren't crazy about Tyra Banks' purple lipstick. The odd color selection, combined with the bulky gold choker necklace she accessorized with, cemented this look as a miss.

Chrissy Teigen attended the H&M Conscious Exclusive Collection Dinner in Los Angeles on March 28 in this beautiful black silk gown. The dress featured a plunging neckline and slits on both sides and paired well with her gorgeous drop earrings.

Katie Holmes arrived at "Good Morning America" in New York City on March 29 in this, well… outfit. The star looked dressed down ahead of her appearance, opting for loafers, ill-fitting jeans and an even more unfortunate plaid buttoned jacket.

Purple suede paired with bronze animal-print pumps. Just let that combination sink in, and then get a really good look at what Heidi Klum chose to wear to the "America's Got Talent" Season 12 kickoff event in Los Angeles on March 27. The belted minidress accessorized with massive gold hoops, sunglasses and those heels made for one of the worst looks of the month.

"Scandal" star Bellamy Young looked like a golden goddess in this Maria Lucia Hohan gown during Paleyfest in Los Angeles on March 26. The actress looked regal in the high-necked dress, which featured a pleated skirt and looked glam with her neutral Stuart Weitzman shoe selection.

What's happening here, Mandy Moore? The "This Is Us" star attended the premiere of her show's Season 1 finale in this odd red and black frock by Adeam — which looked more like a black tank top underneath a red dress. Making matters worse? The high-low hemline. Now let's check out her hair and makeup…

Not salvaging this look? Mandy Moore's messy hairstyle. We're not quite sure what to make of what's going on here, but we're not into the stringy, half-pulled-back look that's happening.

Emma Watson has been sporting amazing style while attending multiple premieres for her film "Beauty and the Beast" all month long, but this look from March 13 was one of our favorites. The black Givenchy number featured a stylish geometric design on the bodice with a diamond cut-out in the center as well as a thigh-high slit on the left side. But the view from the back was our favorite! See that next…

Emma Watson's Givenchy gown featured a glamorous black train and a cutout in the back.

For the Tokyo "Ghost in the Shell" premiere on March 16, Scarlett Johansson wore this bizarre teal jumpsuit that appeared to be comprised of a spaghetti-strap slip dress and half of a silk kimono. Though we appreciated the uniqueness of the frock, the silk draping cut off at an odd length and seemed like an unnecessary element in what could have been a simple, chic look. Now let's take a closer look at her hair and makeup…

Though we weren't in love with her ensemble, Scarlett Johansson's premiere hair and makeup were on-point. We also liked her selection of dangling earrings, which were shown off to perfection with her short 'do.

Demi Lovato rocked the Nickelodeon Kids' Choice Awards carpet in this beautiful coral creation by Halston Heritage. She also showed off shorter locks and matched her lip color to the gown at the Los Angeles event on March 7.

Looking sharp! We loved Zoe Kravitz's take on a simple black pantsuit. The "Big Little Lies" actress kept things fresh with a sparkly gold high-necked top underneath it all at an art event in New York City on March 15.

Katie Holmes opted for an Alberta Ferretti silk dress for the screening of her TV series "The Kennedys: After Camelot" on March 15. And though we loved the color, it was ill-fitting — and we're a bit confused about whether or not the lace-bordered center panel was meant to be straight or run askew. But Katie's beauty look was certainly stunning. See it next!

Katie Holmes wore her hair in a messy updo and went with a warm lip and makeup tone for the event.

The word cute doesn't typically get used when describing a leather dress — but Michelle Williams changed that at the Louis Vuitton show during Paris Fashion Week on March 7. The stylish star donned the design house's black leather minidress with a sweetheart neckline for the event and paired it with edgy pointed-toe boots.

Blac Chyna showed off her impressive post-baby weight loss at the Nickelodeon Kids' Choice Awards on March 7, but we couldn't help but be underwhelmed by her wardrobe choice for the orange carpet. The reality star opted for ripped jeans and a white blouse paired with bright yellow heeled boots. We know the KCAs are typically a more casual event, but this is just too casual!

Kristen Stewart's street style lately has been on-point. The star, who debuted her new buzzed 'do this month, rocked a black crop top and a black skirt with a jagged hemline with a bomber thrown over it all in New York City on March 9. The oxford shoe selection was also a nice, unexpected addition.

Amanda Seyfried showed off her baby bump in this black Chloe minidress, which featured pretty turquoise floral detailing, at the premiere of "The Last Word" in Los Angeles on March 1. The long-sleeved frock paired perfectly with her simple black strappy heel selection.

Jodie Sweetin's Nickelodeon Kids' Choice Awards ensemble on March 11 was a major miss. The star's white and pink dress looked more like a nightgown! We do, however, feel bad that she had to rock an extra accessory — crutches!

Winter whites! Bella Hadid looked lovely while attending an event during Paris Fashion Week on March 6 in this all off-white ensemble that included trousers, an oversized coat and a turtleneck. We also loved the addition of the black T-strap shoes.

That's a whole lot of dress! For the "Iron Fist" series premiere in New York City on March 15, Rosario Dawson rocked this Kenzo x H&M dress featuring stripes comprised of multiple prints — which amounted to one big mess. Let's take a look at the dress from behind…

Yep, that is one big dress! From behind, the layers of Rosario Dawson's Kenzo x H&M dress were even more pronounced, making for a really excessive red carpet moment.

Expectant Amal Clooney provided a pop of color during New York City's chilly winter while heading to United Nations headquarters on March 9 in a bright yellow dress with black detailing and a matching jacket slung over her arm.

Hilary Duff donned a gorgeous pale pink kimono by Raquel Allegra in New York City on March 7. The star tossed it over a crisp white Alexander Wang blouse and high-waisted black jeans for a casual yet cool event outfit.

Zoey Deutch seemed to draw some fashion inspiration from… a firefighter? The actress attended the Miu Miu show during Paris Fashion Week on March 7 in this odd dress-jacket, which looked to be made of shiny leather (pleather?) and featured bright yellow fur patches on the collar and arms.

Now those are some tall boots! Kendall Jenner went out during Paris Fashion Week on March 4 in this tiny long-sleeved red dress with lace-up corset detailing around the waist, but the star of the ensemble is what she paired it with — super-high snakeskin boots.

Berets are back… thanks to Rihanna! The superstar donned one of the black leather variety at the Dior show during Paris Fashion Week on March 3 and rocked it with an ankle-length black coat. Though we're not rushing out to buy one, we will say Rihanna looks great — and is probably the only person who could pull off this outfit.

Right off the runway! Who doesn't love a dress with pockets? We were big fans of Jessica Chastain's cream Chanel number, which featured intricate bead detailing and a metallic belt. The star wore it to the premiere of her film "Miss Sloane" in France on March 2.

Major wardrobe envy! While Ashley Benson was out in New York City on March 9, she shared her love for the Power Rangers with this awesome throwback T-shirt underneath a black fur jacket paired with ripped jeans. 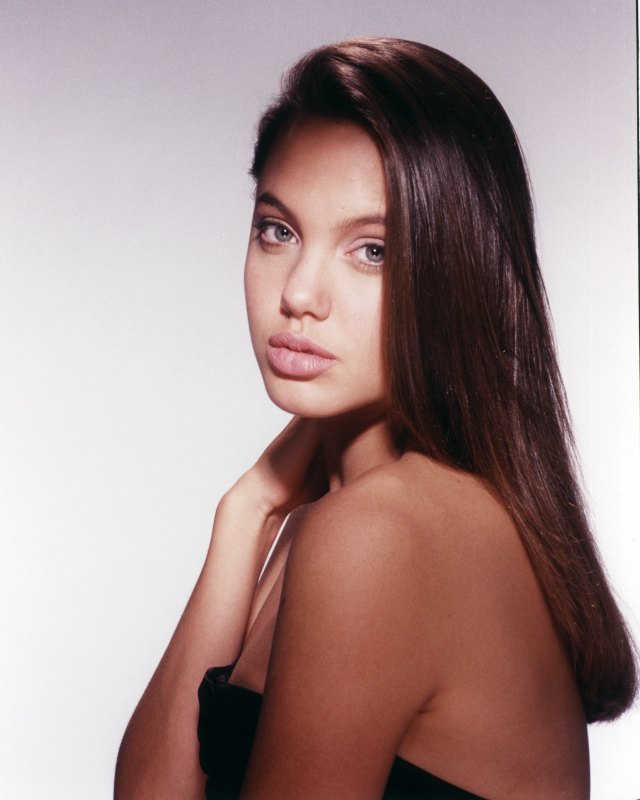