Wonderwall.com is taking a look back at some of Princess Beatrice of York's most notable fashion hits and misses through the years… starting with the emerald The Vampire's Wife dress that she donned during Ellie Goulding's wedding at York Minster cathedral in York, England, on Aug. 31, 2019. The appropriately regal metallic frock featured ruffled sleeves and a tiered skirt. Now keep reading for more of her best and worst looks…

Even as a toddler, Princess Beatrice was working some serious style. The daughter of Prince Andrew and Sarah, Duchess of York wore a floral-embroidered red cardigan and striped pants with what appears to be tot-sized riding shoes (adorbs) at the Windsor Horse Show in May 1990 — less than two months after her little sister, Princess Eugenie, was born.

RELATED: Who's in line for the British throne?

In this July 1993 snapshot, Princess Beatrice of York is sporting a look with elements she still wears today: a full-length dress paired with a belt. While prancing around Dorney Court in London, an almost-5-year-old Beatrice looked every bit the princess in her flowing black-and-white attire.

We're going to let Princess Beatrice off the hook for this double fashion tragedy. For nearly a decade, Beatrice (left) and little sister Princess Eugenie (right) were often photographed wearing identical outfits — and we're pretty sure their mom, Sarah, Duchess of York, had something to do with it. In this March 1998 pic, both wore metallic chartreuse green skirts with black velvet long-sleeved button-down shirts to matchy-match with their mom during a screening of "Anastasia" in London.

While there's nothing particularly wrong with Princess Beatrice's white collared shirt paired with an asymmetrical striped skirt and white loafers, it isn't winning her any fashion awards either. It should be noted that in this July 2004 picture, Beatrice was only 15 and just getting the hang of curating her own style, which was no easy task in the shadow of her fashion-forward mom, Sarah, Duchess of York.

We don't think Princess Beatrice of York looked her best in this sleeveless sage floral-print sundress with white wedge sandals, but we also didn't have to deal with cameras in our face when we were only 17. Seen here at the Monaco Grand Prix in May 2006, Beatrice rightly looks more focused on having fun than putting on a fashion show.

We take back everything we said about twinning with family members. In this stunning September 2007 photo, a 19-year-old Princess Beatrice looked amazing walking the runway with her mom, Sarah, Duchess of York in similar black Dolce & Gabbana gowns. The duo were featured guests at the Fashion for Relief show hosted by model Naomi Campbell during London Fashion Week. They were also reportedly wearing more than $1 million in Garrard jewels.

In this June 2009 pic, Princess Beatrice of York looked très chic in a white linen boho dress paired with a wide, waist-cinching belt, thick gold chain and shimmering heels. The almost-21-year-old royal was hand-in-hand with beau David Clark, whom she dated for nearly a decade before ending their romance in 2016.

Princess Beatrice has a way of making all-black look anything but dreary. In this February 2010 picture, the red-headed royal was captured leaving Annabel's Club in London wearing a knee-length black dress with an organza polka-dot neckline and a ruched bust that was separated by an eye-catching line of gold embroidery.

We're loving Princess Beatrice's color-contrasting look during Ladies Day at the Royal Ascot in June 2010. Her royal blue floral and feather fascinator and matching silk bolero jacket gave the necessary pop of color against her champagne silk mini, which on its own would have been a wash against her fair complexion.

We're positive that if we were princesses, this would be the dress we'd wear. At a pre-wedding dinner for Prince William and Kate Middleton in April 2011, Princess Beatrice brought the sparkle in a silver sequined one-shoulder mermaid gown from Australian designer Elizabeth Gilbert.

After stunning us with her amazing pre-wedding gown the night before, Princess Beatrice's style took a nosedive at cousin Prince William and Kate Middleton's nuptials in April 2011. While her nude Valentino haute couture dress featuring intricate web-like detailing along the neckline wasn't terrible, her hat was another story. The Philip Treacy fascinator looked oddly like a woman's reproductive system, or, perhaps even worse, a lavish toilet seat.

Princess Beatrice struck a winning pose in this Erdem "Lily" dress at the British Fashion Awards in London in November 2012. The dress, which featured a black lace panel in the back and a black lace overlay on the skirt, was perfectly paired with simple black platform pumps.

We're giving this look two thumbs down. In June 2013, Princess Beatrice wore this awkwardly fitted black-and-white dress to the Epsom Derby, where she accompanied her grandmother, Queen Elizabeth II. The graphic-print dress, paired with a studded black-and-gold belt, maroon cloche hat, matching handbag and clunky sandals was a dizzying mix of patterns and colors that weren't able to come together to tell a cohesive fashion story.

Even Prince Andrew looks mad about Princess Beatrice's outfit at the 2013 Trooping the Colour — and we don't blame him! While her sister, Princess Eugenie, looked sweet and stylish in her black-trimmed dress, Beatrice looked like a poorly wrapped present. The ill fit of the high-collared dress jacket and the strange bow embellishments made us desperate to see if there was something (anything) more stylish underneath. Sadly, the black fascinator atop her head didn't help either.

Who said only brides can wear white? Princess Beatrice hit all the right notes in this stunning white Nicholas Oakwell couture dress at the Serpentine Gallery Summer Party in London's Hyde Park in July 2014. We are seriously in love with her lavender heels too, which added the perfect pop of color.

We are definitely feeling the Alexander McQueen tuxedo dress that Princess Beatrice wore to the designer's Savage Beauty gala in March 2015. Keeping her red hair dramatically swooped to one side, the princess allowed the dress — which featured a thigh-high split and satiny lapels — to do all the work.

Simple and sexy with a bit of edge is how we'd define Princess Beatrice's all-black look at the Aquazzura Madison Avenue store opening in New York City in May 2016. We love how her red-brown lace-up flats perfectly complement her long and loose red hair.

At the queen's 90th birthday celebration at St. Paul's Cathedral in London in June 2016, Princess Beatrice wore this uncomfortably bold black-and-white Burberry coat and matching fascinator. Standing beside her father, Prince Andrew, we can't help but think Beatrice looks like she's lost in a geometric maze.

Here's another Trooping the Colour where Princess Beatrice missed just about every fashion mark. During the 2016 celebration — which marked Queen Elizabeth II's 90th birthday — Beatrice stood out for all the wrong reasons in this navy dress and burnt yellow fascinator. Standing between an elegantly styled Duchess Kate and a dapper Prince Andrew, Beatrice's simple, figure-hugging dress could have been a hit had she worn a properly fitted undergarment. Unfortunately, her sun-colored poop-emoji hat sealed the deal on yet another style strike-out.

Dare we say the student has surpassed the teacher? In this May 2017 pic, Princess Beatrice and her mom, Sarah, Duchess of York made a regal style team at the Fashion for Relief show at the Cannes Film Festival. While we think Sarah looks lovely in her green silk and lace gown, we are gaga for Beatrice's stunning embroidered blue high-low skirt and ruffled-sleeve black silk shirt.

Despite landing on best dressed lists all over the web, we can't find a nice thing to say about the nude and navy sheer-paneled dress that Princess Beatrice wore to the V&A Summer Party in London in June 2017. Standing next to her sister, Princess Eugenie, this ruffled and striped see-through monstrosity was certainly an attention-grabber, but it missed the high-style mark by a mile.

Yasss queen! In this May 2018 photo, Princess Beatrice commanded the red carpet like a true royal, donning a studded crown and a sheer plum gown by Alberta Ferretti. The dress, which featured a high neck with metallic embellishments, a ruched bodice and flowing, tapered sleeves, was the perfect look for the Met Gala's "Heavenly Bodies: Fashion and the Catholic Imagination" theme that year.

Princess Beatrice gave us major fashion goals at the V&A Summer Party in London in June 2018. Looking fierce in this chic white ruffled mini from MSGM, the princess upped her style game by pairing the dress with gold-embellished sapphire blue heels and a trendy black box purse.

If Princess Beatrice ever made a fashion mistake, the custom turquoise Roksanda Viola dress that she wore to the wedding of cousin Prince Harry and Meghan Markle in May 2018 made up for them all. The combination of sheer, beaded sleeves and a heavily beaded A-line skirt gave the dress a playful sexiness and haute couture style we absolutely loved. Keeping her accessories on-point, Beatrice paired the dress with a headband-style fascinator from Stephen Jones, a structured blue purse and pointy-toe nude heels.

At sister Princess Eugenie's wedding in October 2018, Princess Beatrice invoked the spirit of Jackie O in this sophisticated royal blue Ralph & Russo dress. Beatrice's bateau-necklined frock, which also featured a sleek peplum waist and ruffled, flared skirt, was the perfect "something blue" for the nuptials, where she served as her sister's maid of honor. Balancing the bold blues of the dress, the princess paired her look with a similar-toned blue-and-purple fascinator and a powder blue purse and heels.

Just when 2018 was going so well for Princess Beatrice, she arrived at the Berggruen Prize Gala in New York City in December channeling 1980s Stevie Nicks. This unflattering black fringe dress made Beatrice look like she was on her way to celebrate the full moon with her coven.

Bouncing back from her fashion flub in late 2018, Princess Beatrice — seen here with grandmother Queen Elizabeth II at the Royal Ascot in June 2019 — proved she still has it. Donning this pale blue Ralfa mididress featuring daisy guipure lace from Maje Paris and a matching wide-brimmed hat, Beatrice managed to stand out while complementing her gran's classic style.

Princess Beatrice donned this belted Alexander McQueen print dress and simple white tennies from Veja during the British Summer Time Hyde Park music festival in London on July 5, 2019. The smart ensemble kept the young royal looking cute and comfy while she danced the night away. 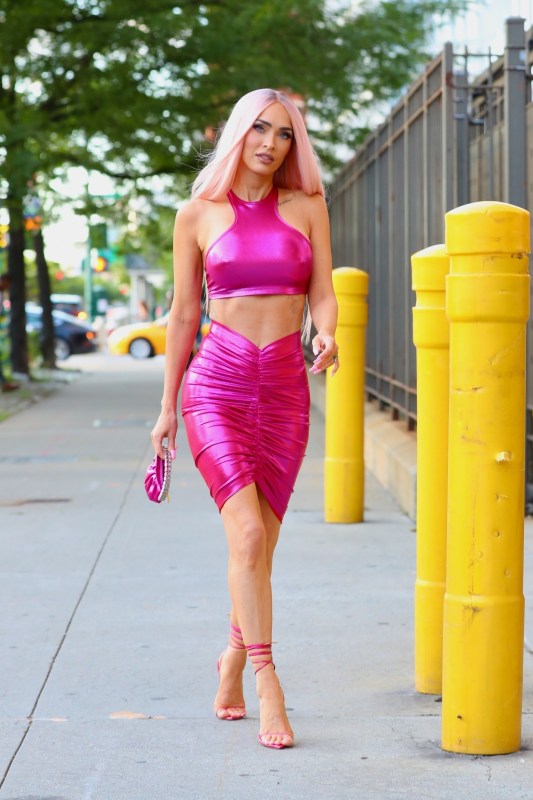