Tom Holland, Zendaya break their silence on those kiss pics

When photos of Tom Holland kissing his long-rumored girlfriend, Zendaya in a car surfaced over the summer, many of the "Spider-Man" stars' fans were elated. Tom and Zendaya? Not so much. "One of the downsides of our fame is that privacy isn't really in our control anymore, and a moment that you think is between two people that love each other very much is now a moment that is shared with the entire world," Tom explains in the new issue of GQ. "I've always been really adamant to keep my private life private, because I share so much of my life with the world anyway … we sort of felt robbed of our privacy," he adds, noting that they simply "didn't want to" discuss their relationship with the public. Zendaya made a similar point when asked about the paparazzi moment. "It was quite strange and weird and confusing and invasive," she told the outlet. "The equal sentiment [we both share] is just that when you really love and care about somebody, some moments or things, you wish were your own," she continued. "I think loving someone is a sacred thing and a special thing and something that you want to deal with and go through and experience and enjoy amongst the two people that love each other."

What does Jake Gyllenhaal think of the Taylor Swift 'All Too Well' debate?

At this point, even Dionne Warwick's weighed in on the dirt Taylor Swift reveals about her ex, Jake Gyllenhaal, in her new recording of "All Too Well." So what does Jake think of the song, which features digs like, "I'll get older but your lovers stay my age?" According to an E! News source, he "has no interest in any of" the chatter that's sprung up online since the track came out. "He's living his life and focused on himself. He's ignoring all of the noise," claims the insider. Jake, now 40, was linked to Taylor, 31, for a few months in 2010. In 2012, fans guessed the original version of "All Too Well" was inspired by Taylor and Jake's split. The new, extended recording on "Red (Taylor's Version)" includes more details that seem to point to Jake.

When Lady Gaga and Adam Driver filmed the "House of Gucci" sex scene between their characters, Patrizia Reggiani and Maurizio Gucci, they limited the run-throughs and delved into some improv, according to Adam. "[Patrizia] very much uses sex as a tool, and I feel like it kind of physically embodies what's going on between them," the actor told Entertainment Weekly at the Nov. 16 premiere. "He comes from this not necessarily emotionally vapid, but [his life is] not as passionate, and that's what she brought," he explained. Asked how they ended up with the "animalistic noises" they both make in the scene, Adam smiled. "We blocked it out as we would any fight or any scene, then we just kind of ran it maybe once or twice, and that was it!" he said. "We were feeling it, so to speak! Everything I say sounds like a double entendre, but we winged it … I will say also, at that point, we had been shooting for a month, so we felt very comfortable to go where we needed to go." "House of Gucci" hits theaters Nov. 24.

Iman is opening up about her "soulmate," David Bowie, who would be turning 75 in January had he not lost his private battle with liver cancer in 2016. "David said it was love at first sight," the supermodel and cosmetics entrepreneur says in a new cover story for People. They'd been set up on a blind date in Los Angeles — "my destiny was calling me to get there so I could meet David," says Iman. After their date, she headed to Paris for a runway show and found her hotel room had been filled with gardenias, courtesy of her new suitor. He then met her at the airport when she returned to L.A. "And that's how it started. He properly wooed me," she recalls. Iman, 66, also reveals when she knew was all-in, telling the outlet, "Early on, we were walking down the street and my shoelace came undone and he got on his knees to tie it for me and I thought, 'He's the one.'" Inspired by those and other memories of her life with the artist, the Somali-born beauty recently launched her first fragrance, Love Memoir. The blend features hints of David's favorite scent, Grey Vetiver by Tom Ford and Tuscan bergamot, a nod to their wedding in Tuscany. Iman describes it as "a monument to eternal love," which she says she still has for David, despite having lost him. Recalling that her daughter, Lexi Jones, once asked if she'd ever remarry, Iman tells People, "I said 'No, I will not.' I still feel married." She adds, "Someone a few years ago referred to David as my late husband and I said 'No, he's not my late husband. He's my husband.'"

Emma Watson gets nostalgic about 'Harry Potter' ahead of 20th anniversary

On Nov. 16, HBO Max announced Emma Watson, Daniel Radcliffe and Rupert Grint will reunite on camera for the first time in nearly a decade for a "Harry Potter" anniversary special. And as the cast prepares to mark 20 years since "Harry Potter and the Sorcerer's Stone" premiered, Emma shared a long thank-you note with her co-stars, their fans and the Harry Potter film crews on Instagram. "Harry Potter was my home, my family, my world and Hermione (still is) my favorite fictional character of all time," she wrote alongside throwback photos of the cast. Emma, now 31, continued: "I am proud not just of what we as group contributed as actors to the franchise but also as the children that became young adults that walked that path … I am proud we were kind to each other that we supported one another and that we held up something meaningful." Addressing the fans, the "Little Women" star said, "The magic of the world wouldn't exist without you. Thank you for fighting to make it such an inclusive and loving place." She also gave a shout-out to the production staff, writing, "I still miss the crew who made these films all the time. Thank you for all of your hard work too – I know your contributions sometimes get overlooked." HBO Max's "Harry Potter 20th Anniversary: Return to Hogwarts" streams Jan. 1.

Less than a week after her conservatorship was finally dissolved, Britney Spears told Instagram followers this week that she's enjoying the "little things" in life, like "owning an ATM card" and being able to spend her money on candles. Speaking to fans about how she's been spending her newfound freedom on Nov. 16, the singer also made sure to thank them for helping to get her story out there. "My voice was muted and threatened for so long, and I wasn't able to speak up or say anything," she said. "And because of you guys and the awareness and kind of knowing what was going on, and delivering that news to the public for so long. … I think you guys saved my life, in a way." In the caption, Brit took aim once more at her immediate family, who she's said repeatedly should be held responsible for preventing her from becoming independent. "Still blows my mind every day I wake up how my family and the conservatorship were able to do what they did to me … it was demoralizing and degrading," Brit captioned the post, in part. According to a People source, the singer's also been "talking a lot about her career" lately. "[She] loves creating music and wants to give her fans a new album," the insider says, but "it seems like she is focusing on one thing at a time."

LeVar Burton is finally getting his own trivia show. Last year, hundreds of thousands of fans petitioned "Jeopardy!" to give the late Alex Trebek's hosting gig to the "Reading Rainbow" star. The show's producers didn't bite, but as LeVar told Trevor Noah on "The Daily Show" in September, the surge of support garnered a whole host of new opportunities. One of those was apparently a Trivial Pursuit-based game show — and LeVar announced this week that he's signed on to host it. According to a statement released by Hasbro's content studio, via Variety, the "Star Trek" alum will host and executive produce the show, which is now in development. "The thing is, I never thought about hosting any other game show outside of 'Jeopardy!'" LeVar, 64, said on "The Daily Show" this fall. "But now, having that they went in a different direction with their show, which is their right, and now I'm thinking, well, it does kind of make sense. Let me see what I can do." "Jeopardy!," meanwhile, ended up mired in scandal after initially naming producer Mike Richards as its new host. He later stepped down amid allegations of past workplace discrimination and resurfaced offensive comments about women and various marginalized groups, and Mayim Bialik and Ken Jennings took over. No release date has been announced for the Trivial Pursuit show.

Surprise! Duchess Meghan made an unannounced visit to her neighbor, Ellen DeGeneres' daytime talk show this week — and her arrival onto the Warner Bros. lot reminded her of the auditions she had there when she was starting out as an actress. "I would park at gate three and scoot over …," the duchess said in a clip (via Fox). "The security guards would always say, 'Break a leg. I hope you get it.' I think they probably said it to everybody. … Driving here today was very different," she added with a smile. Part of that difference had to do with her ride. Back when she was still trying to land roles, Meghan said she drove an old Ford Explorer Sport with a broken key that wouldn't open the driver's side door. "So after auditions, I would park in the back of the parking lot and I would open the trunk, climb in, pull it shut behind me and crawl over all of my seats to get out that's how I would come to and fro," said the former "Suits" star, laughing. "I would play it off like, 'Just looking for my resume and my highlighter for my script. Oh, maybe it's back there.' And then crawl." Meghan left "Suits" before marrying Prince Harry in 2018. Two years later, the couple stepped down as senior royal family members and moved into a home not far from Ellen's in Montecito, California. 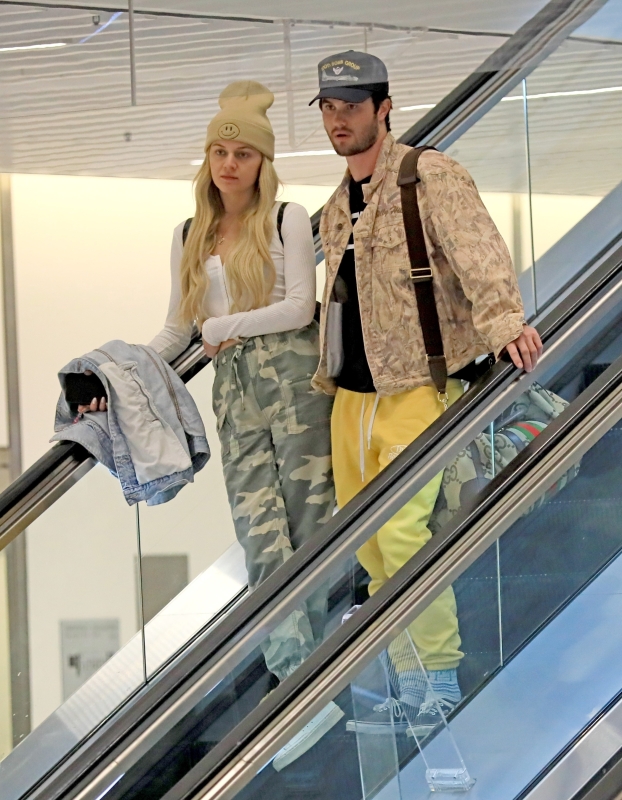