On Nov. 28, Madonna showed off the final installment in what she called her "trilogy of tattoos" for 2021 on Instagram. The new ink, however, is in Hebrew — and it might not translate to what Madge seems to think it does. It seems the Queen of Pop had the word "Ve'yishakhu" tattooed on her wrist while four of her kids kept their mom company at a tattoo shop. In a clip on her Instagram Story, Madonna tells her daughter the word translates to "kiss" in Hebrew. "Completing the trilogy of tattoos……. I choose to do this year," the singer wrote in a caption, adding, "Life is a journey to remove the Space between ourselves and humanity." But according to the Israeli newspaper Israel Hayom, the Hebrew word for "kiss" is "neshika," while the word Madonna picked — "Ve'yishakhu" — comes from a verse in Genesis that is usually "interpreted as indicating that Esau's heart was not behind the kiss he bestowed on his brother," Jacob, and is apparently used in a negative sense.

In a new interview with his pal, Dax Shepard, and Dax's "Armchair Expert" co-host, Monica Padman, Bradley Cooper revealed he was "held up at knifepoint" on the New York City subway before the pandemic. The "Nightmare Alley" star, 46, said he was heading to pick up Lea, the 4-year-old daughter he shares with his (rumored on-again) ex, Irina Shayk, while wearing headphones when he found himself face-to-face with a man whose three-inch long knife was pointed right at him. "I was on the subway … to pick [up] Lea downtown at Russian school and I got held up at knifepoint," Bradley recalled. "It was pretty insane. I realized I had gotten way, way too comfortable in the city. My guard was down … I was all the way at the end of the subway." When he "felt somebody coming up" to him, Bradley said, he figured, "Oh they want to take a photo or something." But when he turned around, he saw they had a knife. "I look up, I see the person's eyes, and I'm taken by how young they are," he continued. "I just started booking, just started running. I jumped over the turnstile, hid around the white, tiled entrance to the subway [and] took my phone out." As the man ran away, Bradley said he took pictures of him and chased him, snapping photos until he found two police officers to show the pics to. "The [cop] kept saying … 'Are you stabbed?'" Bradley recalled. "I was like, 'No, no.' He was like, 'Check to see if you're stabbed. What happens is people get stabbed and they're in shock.'" Bradley checked — he was OK– "and then I got back on the subway and picked up my daughter," he said.

RELATED: Our favorite Bradley Cooper movies to stream in 2021

British royals reporter Christopher Andersen claims Prince Charles was the previously unidentified member of the family who raised questions about what skin color Prince Harry and Duchess Meghan's future children might have. Appearing on "Today" on Nov. 29 to discuss his new book, "Brothers and Wives: Inside the Private Lives of William, Kate, Harry, and Meghan," Christopher elaborated on one of the book's bombshells, in which he writes that Charles casually asked his wife, Duchess Camilla over breakfast, "What do you suppose their children's complexion might be?" According to the book, royal advisors used the comment against the family, leading Harry and Meghan to tell Oprah Winfrey in their March sit-down interview that someone in the immediate family had "concerns and conversations" about "how dark [their son's skin] might be when he's born." On "Today," Christopher explained: "What I'm saying is that on the morning the engagement of Harry and Meghan was announced, in a very kind of benign way, Prince Charles started to muse on what their future grandchildren might look like." He continued: "Here's this beautiful, biracial American woman and the world's most famous redhead. I'm a grandfather, of course we all do this, speculate on that. But it was turned into something very toxic, it was weaponized really, by the men in gray who run the palace organization." Both Page Six and Reuters later quoted a rep for Charles as saying the claim "is fiction and not worth further comment."

"The most adorable couple ever in the history of adorableness." That's how Tom Holland and Zendaya's "Spider-Man: No Way Home" co-star, J.B. Smoove, recently summed up the actors' relationship in an interview with Entertainment Tonight. "Oh, I love those two. I love them so much," J.B. gushed when asked about the pair. His comment comes on the heels of a GQ cover feature on Tom in which both he and Zendaya, 25, broke their silence on photos that showed them sharing a kiss and seemed to confirm rumors they are more than just friends, off-camera. Clearly frustrated by the "invasion of privacy" the photos represented, Tom explained to GQ, "This isn't my story. It's our story. And we'll talk about what it is when we're ready to talk about it together."

In the wake of celebrated designer Virgil Abloh's death on Nov. 28, stars who knew and loved working with the artistic director of Louis Vuitton menswear and Off-White CEO honored him on social media and beyond. Many of them, including models Bella Hadid and Hailey Baldwin, said they were shocked to learn Virgil was privately battling a rare and aggressive form of cancer called cardiac angiosarcoma. "Even when the world felt sad, he brought laughter and color and beauty," Bella wrote, in part. "The way he made a positive impact on anything he touched, and always pushed for his culture/the world is the reason why he was an angel on earth and one to so many. The most beautiful warrior soul. I can't believe this." Kanye West, a longtime friend of Virgil's who interned at Fendi with the fashion star, dedicated his weekly Sunday Service to Virgil. "If you had the privilege of knowing Virgil, you were one of the lucky ones," Kendall Jenner shared on Instagram. "He was the kindest, most positive, humble, joyful, and full of light person I have ever known," she shared, in part. "No words do my feelings justice at this very moment, but what I can say is that I am absolutely heartbroken. For his family, his kids, his wife, and anyone who cared for him deeply." Said Pharrell: "Virgil you were a kind, generous, thoughtful creative genius. Your work as a human and your work as a spiritual being will live forever."

George Clooney reflects on being filmed by strangers after bike wreck

George Clooney says his 2018 motorcycle accident in Italy gave him a new perspective on where his life really stands with others in the world. "The Tender Bar" director, 60, was shooting "Catch-22″ in Italy" that summer during the wreck, which sent him flying in the air after he hit a car. Looking back on the incident in a new interview with The Sunday Times, George explained: "If you're in the public eye, what you realize when you're on the ground thinking it's the last minute of your life is that, for some people, it's just going to be entertainment for their Facebook page." He added, "I'm a pretty positive guy, but that told me — clearly — that you really are here just for their entertainment," and said, "I was waiting for my switch to turn off," assuming that was the end. Instead, he recovered and as he told the Times, he feels "fine" today, though he joked at another point in the interview, "Turning 60 is a bummer, but it's that or dead."

More than a year after Tiffany Haddish and Common went public with their long-rumored romance, the pair have reportedly called it quits. "They are never in the same city together and both of them are just too busy for a serious relationship," a source told People in a Nov. 29 report. The "Girls Trip" star and comic, 41, met the 49-year-old musician and actor on the set of 2019's "The Kitchen." Tiffany has said they were friends first, but things changed in 2020 after a Bumble date. That summer, once things were out in the open, Common gushed about Tiffany to Kelly Ripa and Ryan Seacrest on "Live," calling her a "queen" and telling the co-hosts he was "happy."

Teyana Taylor is recovering after a health scare over the weekend sent her to the emergency room. On Nov. 28, after canceling her scheduled concert in Connecticut, the singer shared a selfie from a hospital bed. In the lengthy caption, she thanked fans "for being so understanding," and said that despite having "tried everything" to feel well enough to perform, her body "SHUT DOWN," and landed her in the hospital. "my body simply just gave out, which actually started a few days ago," she explained, recalling how she's performed in the past despite issues like a broken foot. "But honestly you have to listen to your body and know when to sit down; or it will definitely sit you down …," she continued. Teyana said she was given "the proper fluids and nutrients" in the hospital and "will take the next few off days to continue to recover." Before signing off, the singer thanked her team as well as her daughter, Junie, 5, for "holding it down for mommy,🌹." Teyana and her husband, basketball pro and 2021 "Dancing With the Stars" champ, Iman Shumpert, are parents to Junie and Junie's little sister, 1-year-old Rue. 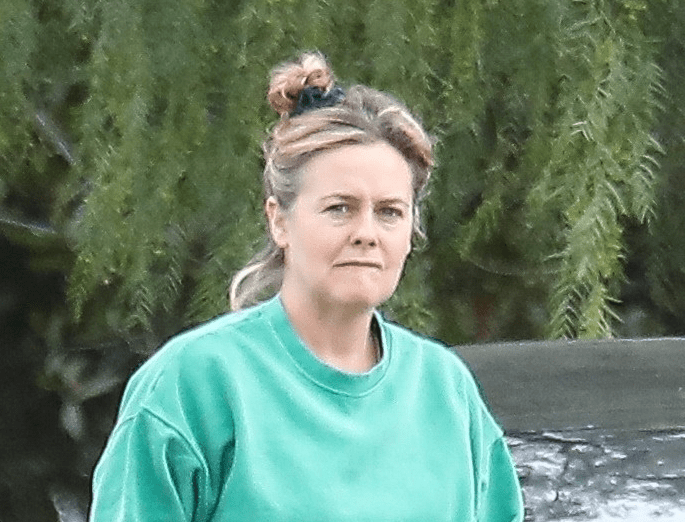